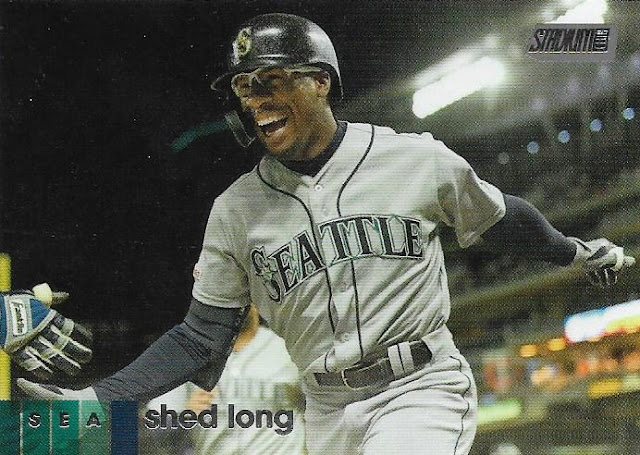 I don't discuss night cards or publish weekly Awesome Night Card posts much anymore. One of the few mini-collections that I have is more of an under-the-radar card habit for me these days.
But the night card binder is still going, maybe not as strongly but I still pull it out periodically to see what slots I can fill. It really is pretty when you open it up and look at the gleaming lights beaming from the pages.
Recently, Max from the Starting Nine blog sent an assortment of cards catered to my interests and two of them were fantastically constructed night cards from this year's Stadium Club.
Look at that Shed Long card above. Joy in prime time right there. Very cool. And I barely know who Shed Long is.
So, you know the frankenset drill. I turn over the Shed Long card to see what number it is and see if it can fill a slot, or bump the other card out. Long is card No. 198 in 2020 Stadium Club.
But there's someone in the way: 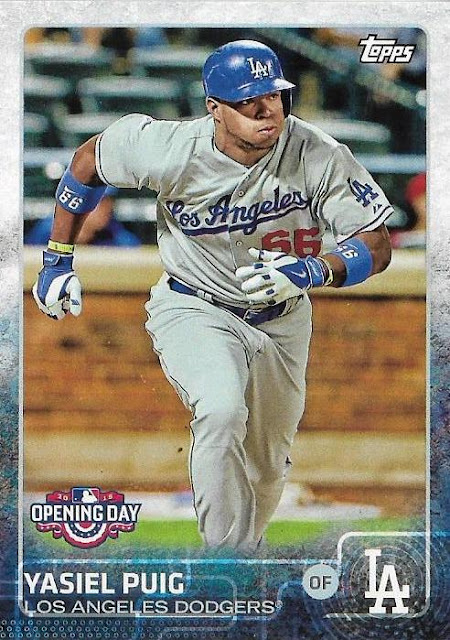 Sorry, Shed, you're not going to unseat Puig. This may not be as prominent or pleasing a night card as the Long Stadium Club card but the player portrayed means quite a bit when I'm playing frankenset king. A Dodger is almost always going to win. 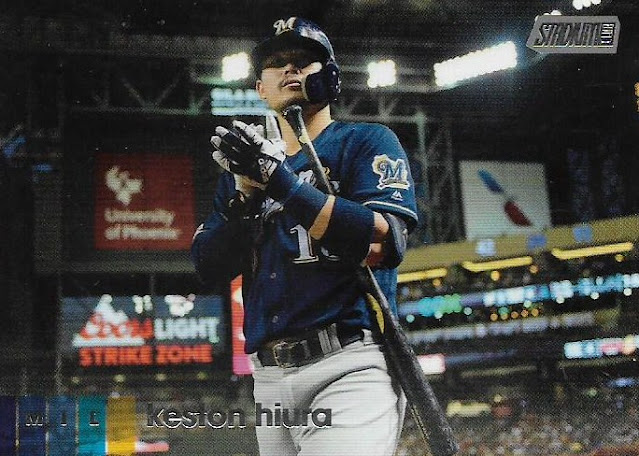 Here is the other Stadium Club night card that Max sent. It is peak "You Are In The Stadium At Night". Normally, something like this would break through at card No. 124. But as you've seen above, and I've experienced many times, the night card binder is a harsh mistress ... or mister.
Let's see what is in that No. 124 slot, if anything: 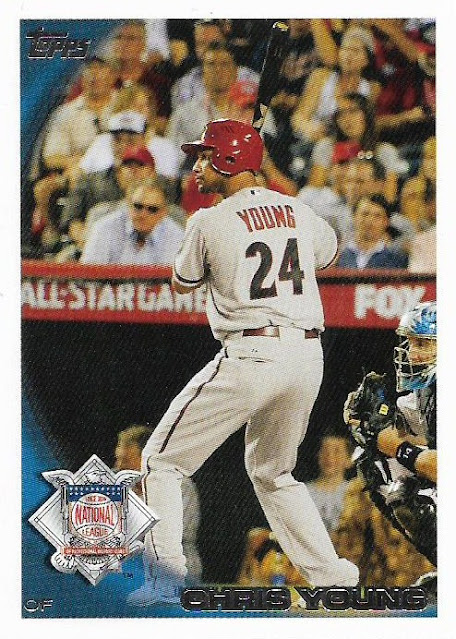 Yes! A lame 2010 Update All-Star card of a static Diamondback! The Keston Hiura card wins easily!
That's a relief. Even though I have plenty of empty slots in the night card binder, you never know who is going to come out on top.
So with some card collecting success out of the way, let's look at some other cards that Max sent. He really does know what I like. 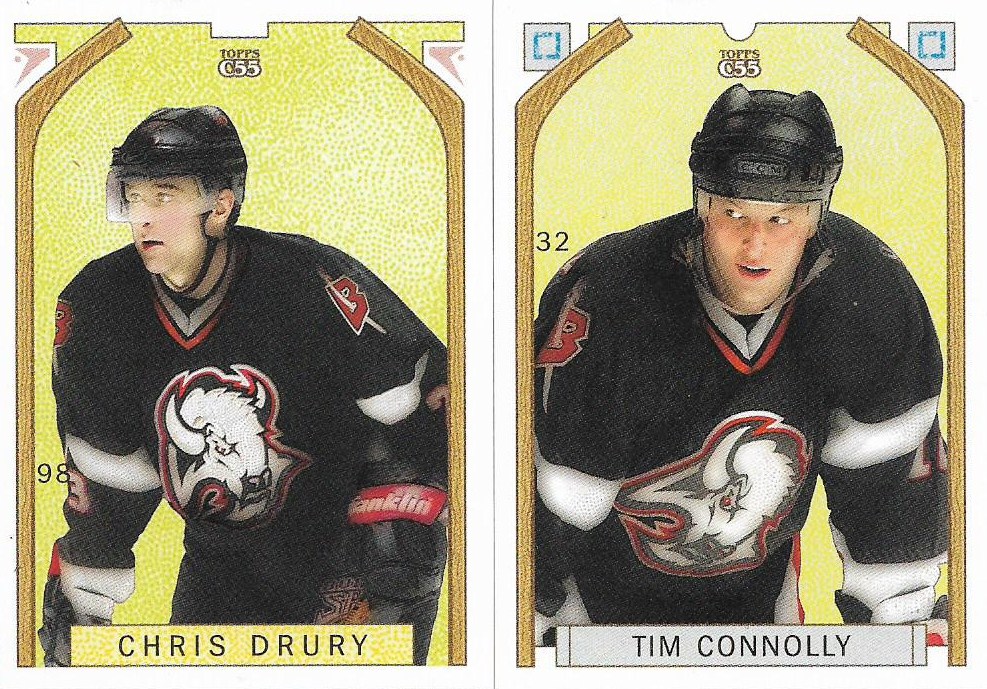 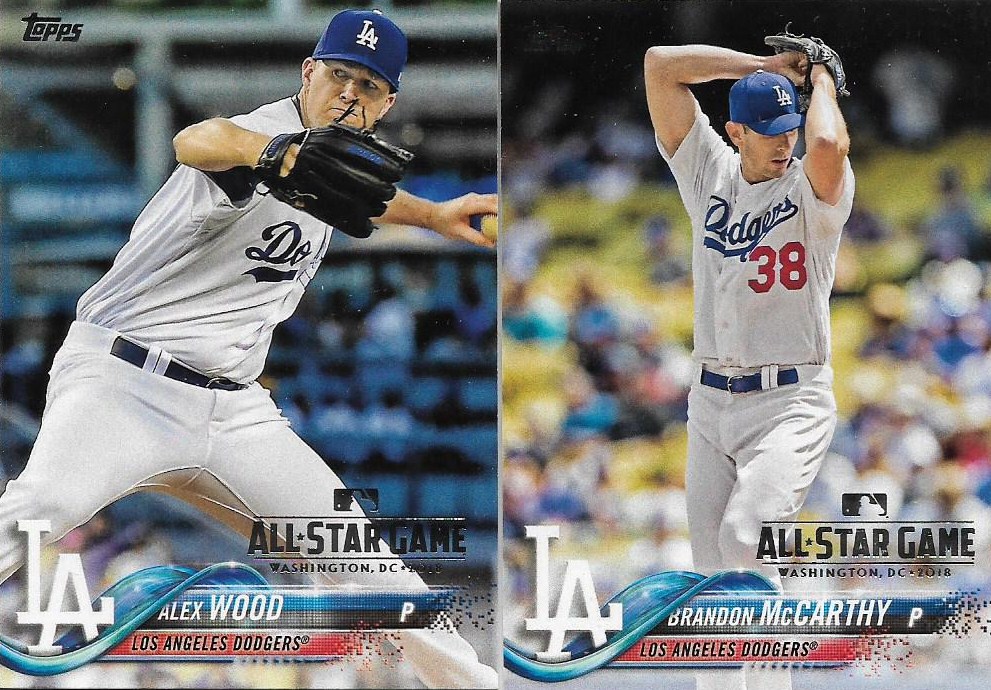 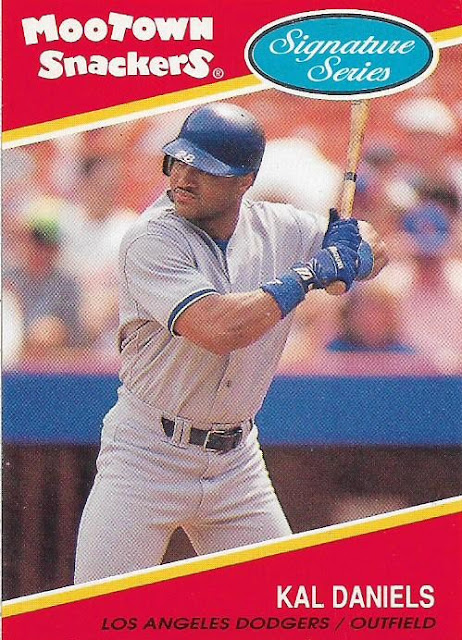 The 2002 Chrome Traded Orosco fills the team-completist collector urge in me. Nothing like getting a need from early in the 21st century when it seemed like nobody collected.
The Sabres cards are from the 2003-04 Topps C55 set, which I admit I know nothing about other than it is a retro set.
The less said about the All-Star Game stamped parallels the better, but meanwhile I will take all of your copies of the Kal Daniels Mootown Snackers card. 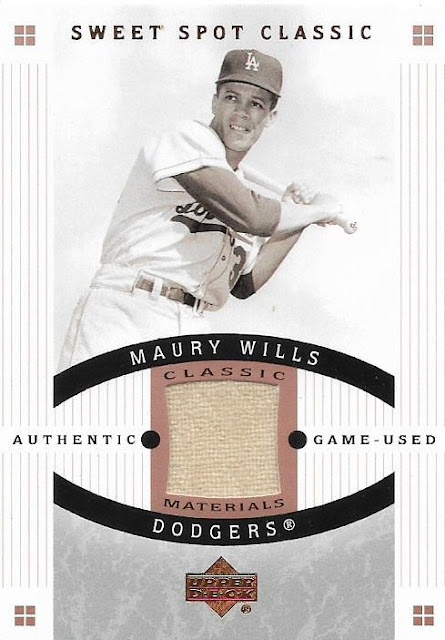 Max had been trying to get me this card for quite awhile, but one small problem: he couldn't find it. I know exactly how that is. Lately, I've been misplacing my cards more and more. Sometimes, I'll go into the card room to grab a couple of cards and then I'll get sidetracked by something else I have to do, and when I return to the cards, they're not there. I then travel from room to room, upstairs and downstairs, to figure out where the heck I put those cards.
Fortunately, Max found the Maury Wills relic card. But I still don't know where I put a couple of 1980 Topps Super Glossy cards (yes, I know they're huge. I'm a lot more alarmed about it than you are).
Now, let's get to the really good stuff that was in the envelope:

Yes! 1975 Hostess panels!!!!!
One of the highlights of all my recent card show trips was the time I bought a bunch of '70s Hostess panels.
The Cey-Porter-Carlton panel adds a bit of intrigue, which I shall reveal thusly:

Yup, I have another 1975 Hostess Cey panel.
It was sent to me quite awhile ago. Obviously it has some issues. Somebody once folded it in half and then promptly sat on Steve Carlton.
But the newer Cey panel will work quite well since I'm collecting any Hostess panels and individually-cut Hostess cards that I can. I will keep the newer Cey panel intact and cut up the older Cey panel for the individual cards. Weeeee! I love this.
I also have a binder for just Hostess cards but unlike the Night Card Binder, every '70s Hostess item I get is welcome in the binder.
That's '70s cards for you. They're a lot happier than your average card. And my Hostess binder is a happy hostess!

jacobmrley said…
Wanna know the worst part about misplacing the Wills card? It was hiding in plain sight for months. I have a small open shoebox of thicker top loaders right in front of my card sorting area and somehow the Wills found itself in the middle of this box but perfectly camouflaged by the layers of redundant empty plastic holders. Only while rummaging for a specific size did I stumble across it. But I literally looked at it everyday I played with the cards without ever seeing it. Not only is my mind going, it is going in bizarre ways indeed.

Fuji said…
That Keston is awesome! I'm hoping to add that set to my collection one day. I feel like this year the photography is on another level.

Nick Vossbrink said…
That Hostess Carlton looks to have been taken at Candlestick. Reminds me that I should get back to building those pages.
November 9, 2020 at 11:31 AM

Jay said…
I'm delighted to see that there's a series called "Mootown Snackers" that is now calling upon me to collect it.
November 9, 2020 at 1:29 PM

Bulldog said…
Cool cards. I think Darrell Porter and those glasses are my favorite.
November 9, 2020 at 3:27 PM

Nick said…
I own exactly two uncut Hostess panels, and I'm thinking I should get on adding to that number. I love the individual cards, of course, but the panels are an added layer of awesome.
November 9, 2020 at 6:45 PM