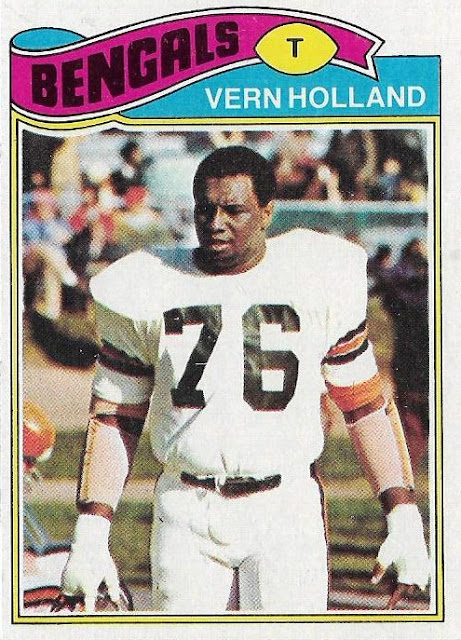 Every year, a football season begins and I am not ready.
Baseball so thoroughly dominates my attention and my hobby that it is impossible for me to focus on another sport with anything more than "oh, yeah, that happened" interest.
So when football announces itself in September that it's ready to go -- are you ready for some football? -- my response is always the same. "It's pennant race time, guys. Bother me when the World Series is over."
During September and October, I try to watch the NFL, but it doesn't mean as much until baseball is over. I don't follow the team storylines or the players very closely. I do OK with my Bills and some of the teams they play. But teams like the Falcons or Saints? Forget it. I'm lucky if I know five names.
But then comes the first Football-Centric Sunday on the calendar. The Series is done, I'm usually ready to move on from baseball. Considering who won the World Series this year, I'm not QUITE ready to put baseball aside, but I am pretty much in a football frame of mind.
Today is that Sunday. The TV is tuned to the game right now with no baseball game to think about. And I have football cards to show.
I'm getting down to the final stages of completing the 1977 Topps football set, my all-time favorite football set, the first set that I collected as a kid. After making a couple of Sportlots purchases, I thought I was down to needing just one card (more on that later).
Here are some of the last cards that I needed, those guys who were knocking heads when I was first getting to know about Raiders and Broncos and Browns. 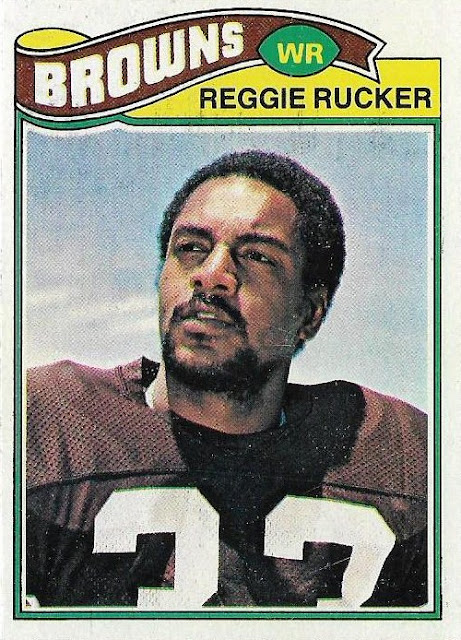 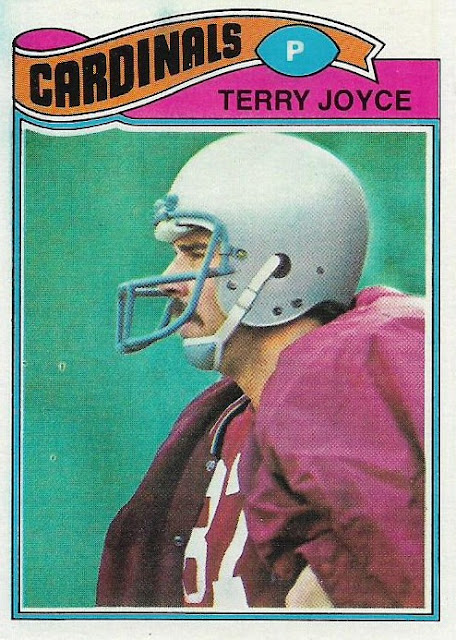 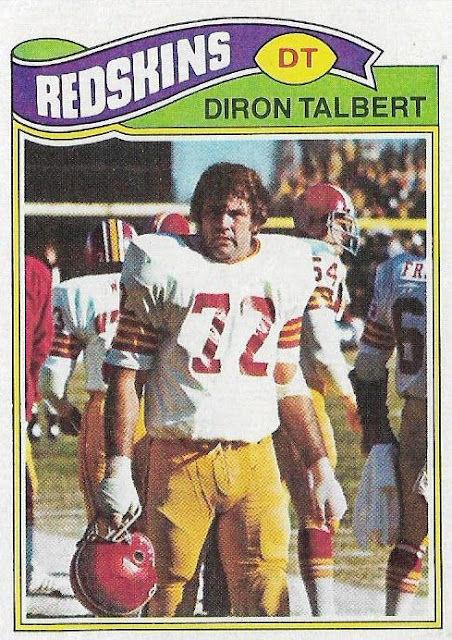 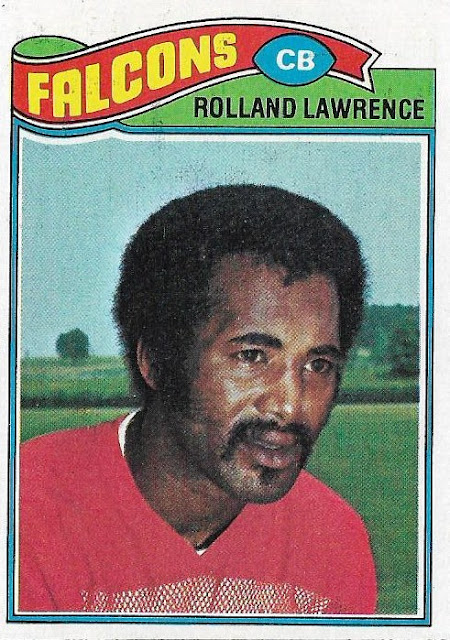 Admittedly, I don't know much about these guys. Even as a kid, baseball occupied all my time. I'm assuming that since they are among the final 20-or-so cards I needed that they are coveted for some reason or another. 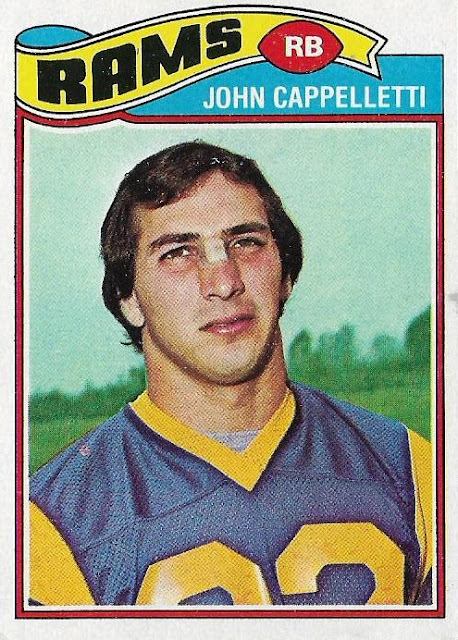 Here is a guy that I'm gathering was a big deal as I've been collecting this set. It could be because of the monster bandage on his nose or because of his Penn State days and that he was the subject of a TV movie. (I'm going with the bandage). 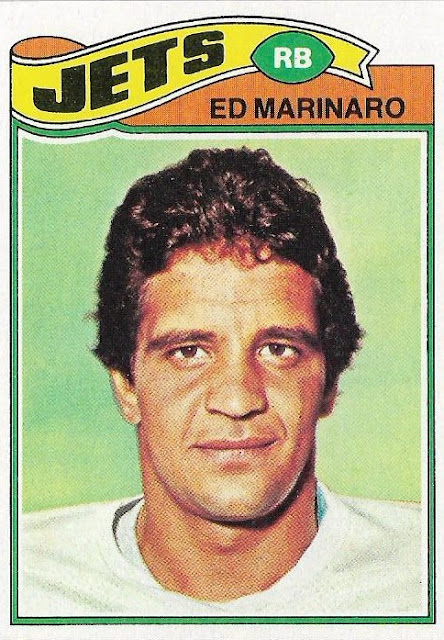 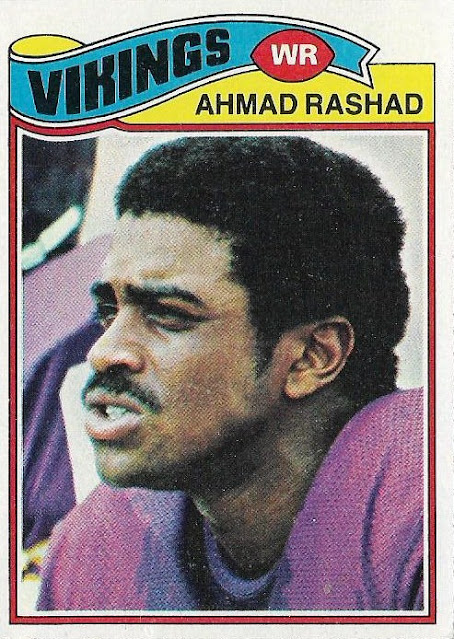 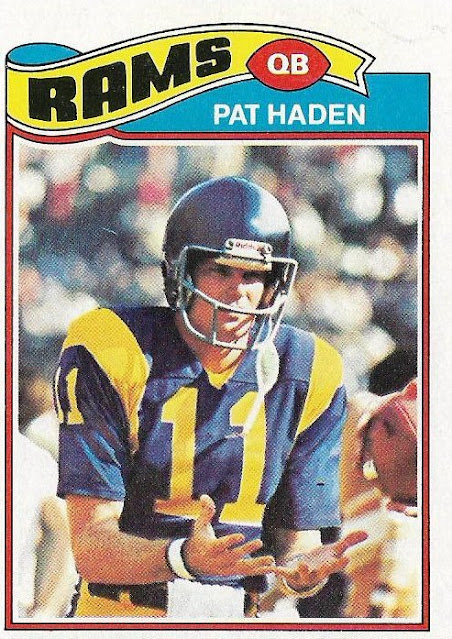 Also as I've collected this set, it's been interesting to see how many players moved on to other highly visible fields after leaving the NFL playing scene. In many cases, that's jacked up the price of their cards, even though -- come on -- how many people still remember Ed Marinaro from "Hill Street Blues"? (Probably only people who want to collect the '77 Topps football set, huh?) 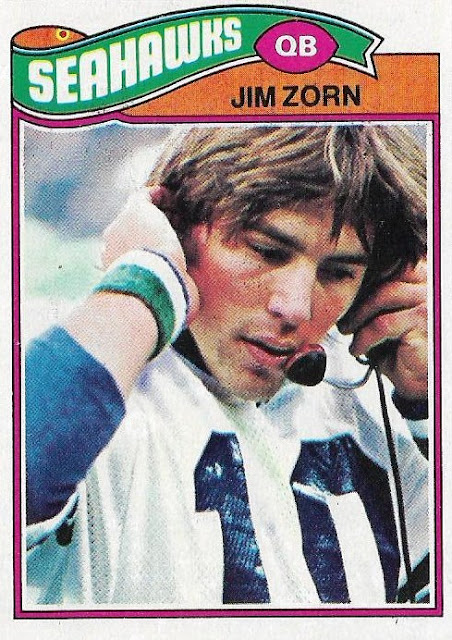 This was the most expensive of the most recent purchases and I even settled for a slightly less than perfect copy to cut down on the price. Not only is Jim Zorn the quarterback on the original Seahawks team but he had an NFL coaching career, too. But, still, I think people hike the price because he has a cool name. 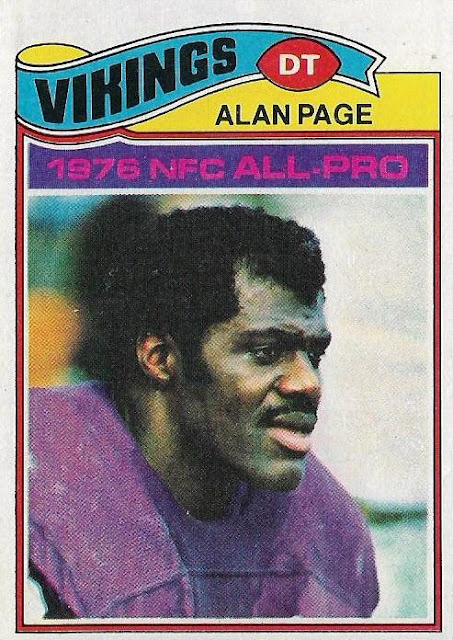 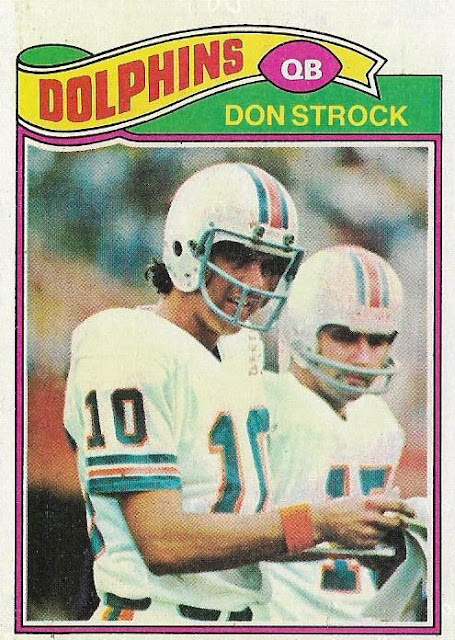 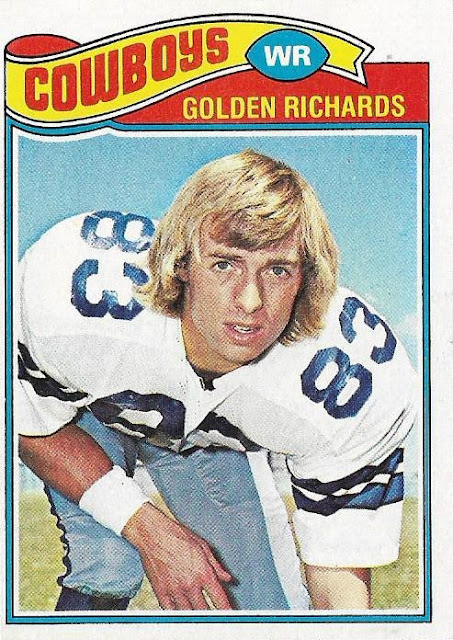 Then there are the guys who were a big deal to me when I was pulling them out of packs. I liked Alan Page's cards before I even knew he was the key part of the Vikings' devastating defense. Golden Richards, well, those mid-to-late '70s Cowboys teams impressed me and anyone named "Golden" was worth having his card turned over.
Don Strock is a blast from the past -- that time before Dan Marino (before Dan Marino, kiddies) -- when Strock was the backup to Brian Griese and he never got a chance except for that epic game against the Chargers in the playoffs in 1982 (one of the best games I've ever watched). 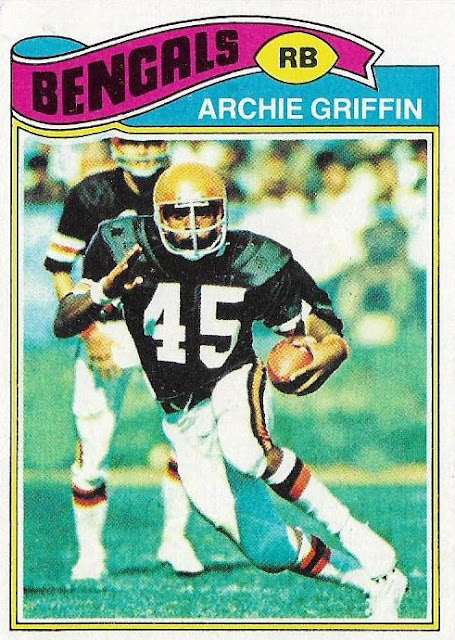 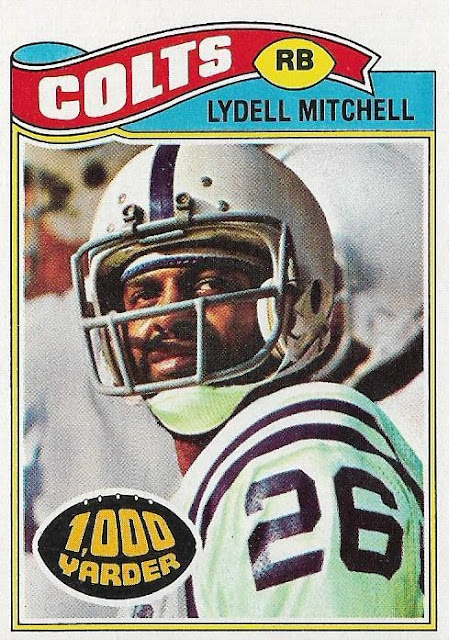 Two cards I remember very clearly being in my collection in 1977. I even had doubles of the Archie Griffin card. But I had no idea who Griffin or Mitchell were.
Can you imagine not knowing who Archie Griffin is? A two-time Heisman Trophy winner? That's how much college football was followed in my house. 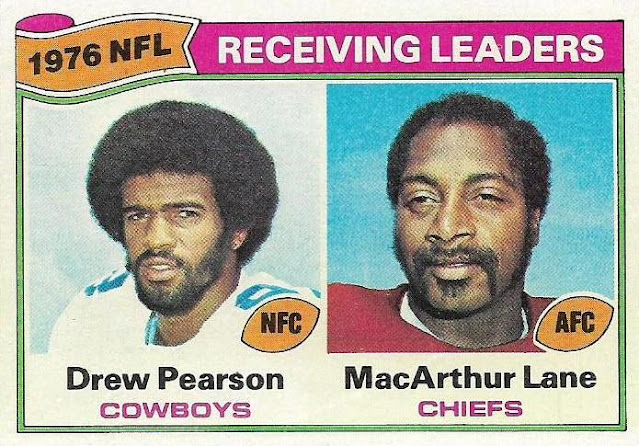 The last leaders card I needed with the righteous 'do of Drew Pearson. No argument from young night owl on this card -- I revered Drew Pearson's cards. But how is it that the last leader card doesn't contain Payton or even O.J.? 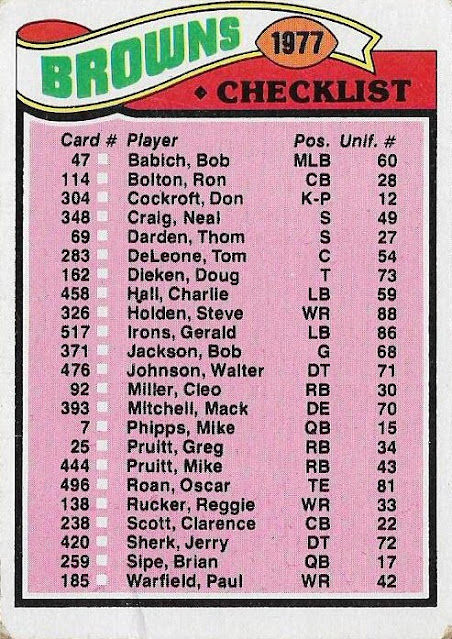 The most eye-opening aspect of collecting the 1977 football set is that the team checklists would be the peskiest -- re: most expensive -- part of the set.
Yes, I want these checklists to be unchecked. As a kid who collected at the time, I know I was able to avoid checking these things at least some of the time. So, the unchecked versions are NOT THAT RARE. But, still, it was a struggle rounding them up.
The Browns checklist was the penultimate needed checklist. The Cowboys one is still out there. That's mostly because I don't want to pay the asking price ... for a checklist.
I thought that the Cowboys checklist was the last card I needed to complete the set, and even announced that on Twitter (just one of many, many, millions of inaccurate statements on Twitter every day). But my set- collecting journey has always included faulty record-keeping, which requires me to fact-check myself whenever I'm nearing the end of a set task.
Going through my '77 football binder, I found two other cards that I need:
#30 - Ed White
#193 - Jon Morris
Huh, a guard and a center. That was not expected.
So, they're on the want list along with #207, the Cowboys checklist. I still expect that infernal checklist to be the last card I need. But I'll get it.
My focus, after all, is on football for now.
(But expect to see plenty of baseball -- and, yes, Dodgers posts -- in the next week. And the week after that, and the week after that ...).

Mike the History Teacher said…
Just like with baseball, 1977 was my first year as a football fan, and the 77 Topps set is still my favorite football set. I love the "1,000 Yarder" logo. I think they only used that on the 76 and 77 sets.

I look forward to reading your post when you complete the set. If your collection were a football field, you'd be at the two-foot line.
November 1, 2020 at 7:11 PM

Brett Alan said…
I've got my old football cards...I'll take a look and see whether I have any of your needs. Don't know whether I was checking my checklists at that point or not, but they won't be mint, I'll tell you that.

Brian Griese was 7 years old in 1982, BTW. I actually love this, because my brother is a huge Dolphins fan, and was even more back then. And in a recent online column, he referred to how well Clay Bellinger was doing for your Dodgers in the playoffs! https://6feet.com/the-first-covid-champs/ That's some coincidence!
November 1, 2020 at 7:56 PM

night owl said…
I actually told myself "I better double-check that I have the right Griese" as I was editing and then forgot. The older you get, the more often you make that type of mistake. Too many people to remember.

Fuji said…
A. Love the Zorn rookie card. I received my first copy back in the 80's for a birthday present.

B. I remember Strock. Not sure how though... looks like he was a career backup for the Dolphins.