When the hobby was cheap 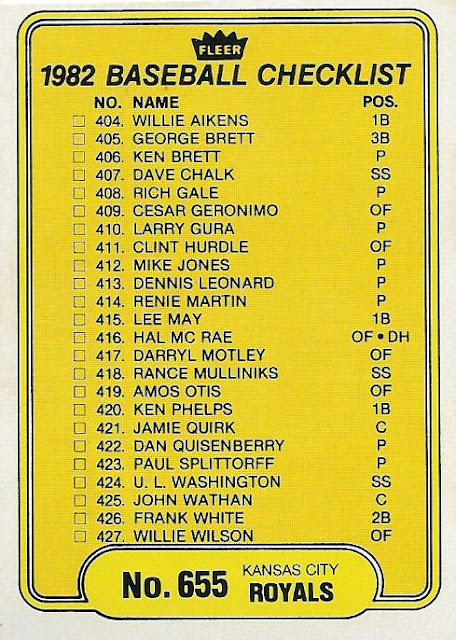 As a child of the '70s and '80s, the increasing exclusiveness of the collecting hobby has always thrown me.
To see cards described as "high-end" has never seemed right, and to see the prices people are charging for rather ordinary cards these days makes almost zero sense to someone who was paying 15 cents per pack as a kid.
For the first half of my collecting life, cards have always been available. They were right down at the drug store or corner market. And they were cheap. Someone with a paper route could save enough money to buy a few packs every week if they wanted.
This is why I like cards from the 1980s so much. The cards from the '80s were cheap and they ARE cheap. The vast majority of '80s cards cost hardly anything to own and that's the way cards should be. Save those costly cards for old, moldy tobacco cards or that Nap Lajoie guy who I always saw advertised in collecting catalogs for far too much money.
The '80s would never do that to you. Those cards are there for the taking.
So with the inflated price of cards over the past months and the complete lack of anything on store shelves (I checked again today, one of my every-three-weeks checks), I returned to the '80s to find some cards that were as God intended them to be -- cheap.
A few recent mailings from fellow traders that contained some '80s Fleer needs got me to thinking how I should be finishing off these sets. The sticky issue is that online folks often charge way too much for even '80s Fleer cards. Sorry, COMC, I'm not paying a buck for a 1982 Fleer card of Gary Lavelle.
But there IS an online store where you can pay the proper amount for 1980s Fleer, and that's the baseball card store where things are proper '80s prices, 10 cents a pop.
I went right to the Fleer selection and this is what I got: 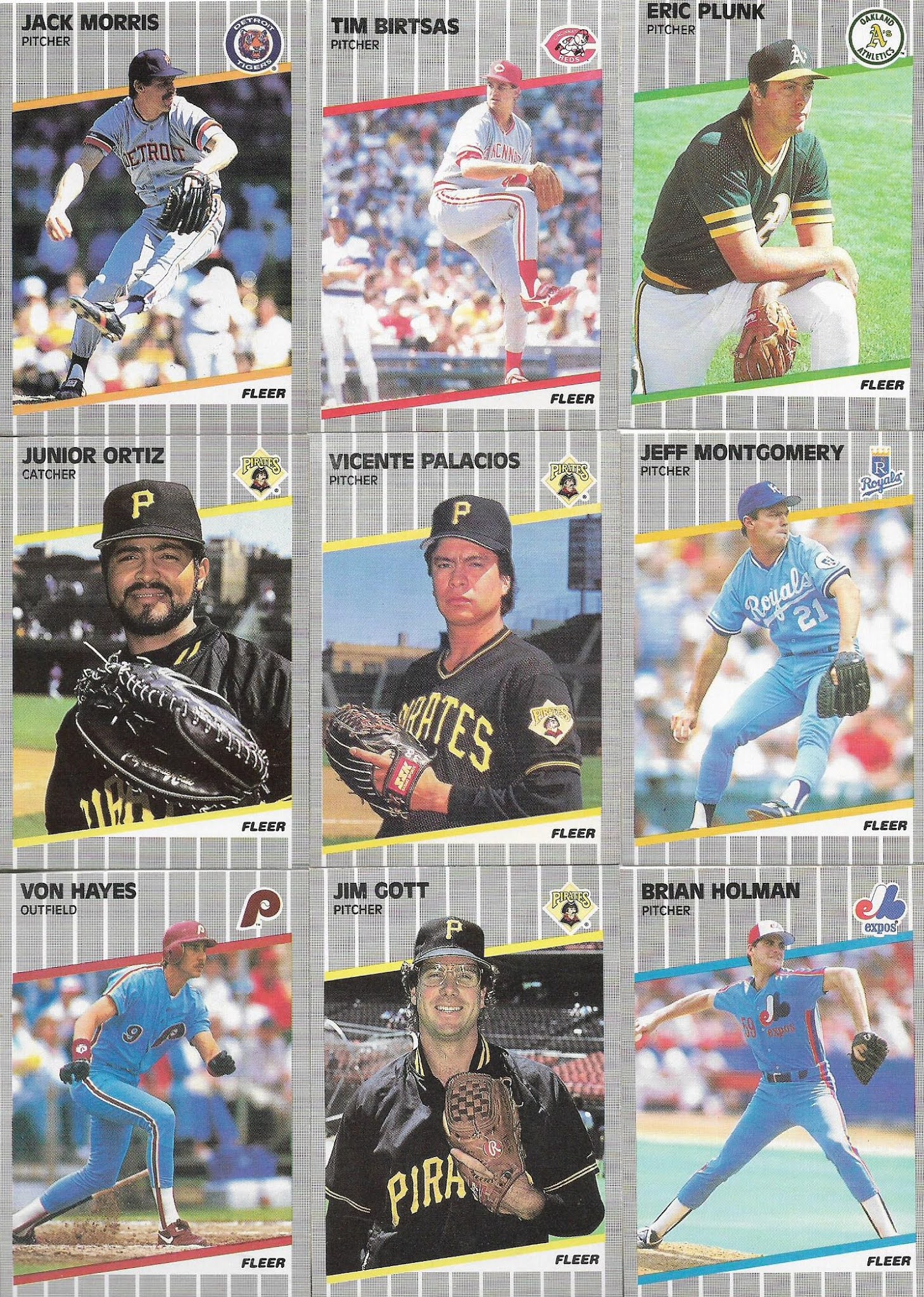 I tried to finish off as many 1989 Fleer needs as I could. There's no way in the world I should be still dealing with this set. I know everyone just wants me to buy a complete set and be done with it, but I can't do that -- not for a set like '89 Fleer. 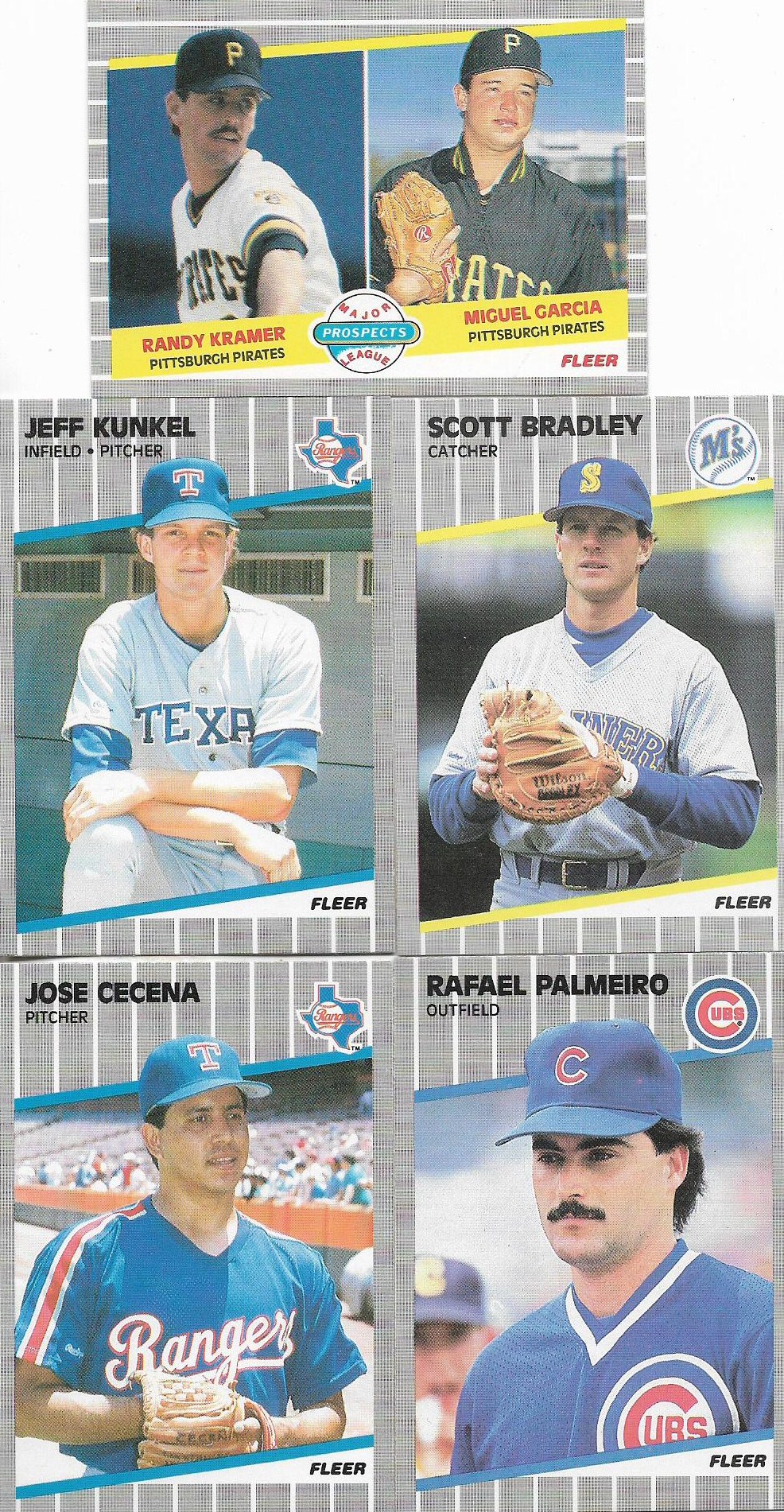 This is more like it. Ten cents per card and a buck forty for all of them. It probably shouldn't even cost that much.
I was able to grab all but one need from the set. All that's left is the rookie Craig Biggio card, which I guess I should pay more than 10 cents to have. But I don't want to.
My '89 Fleer grabs actually came at the end of my cart-filling session and the cards are so cheap I'm always thinking (this is my third trip to the online dime store), "what else can I get?" 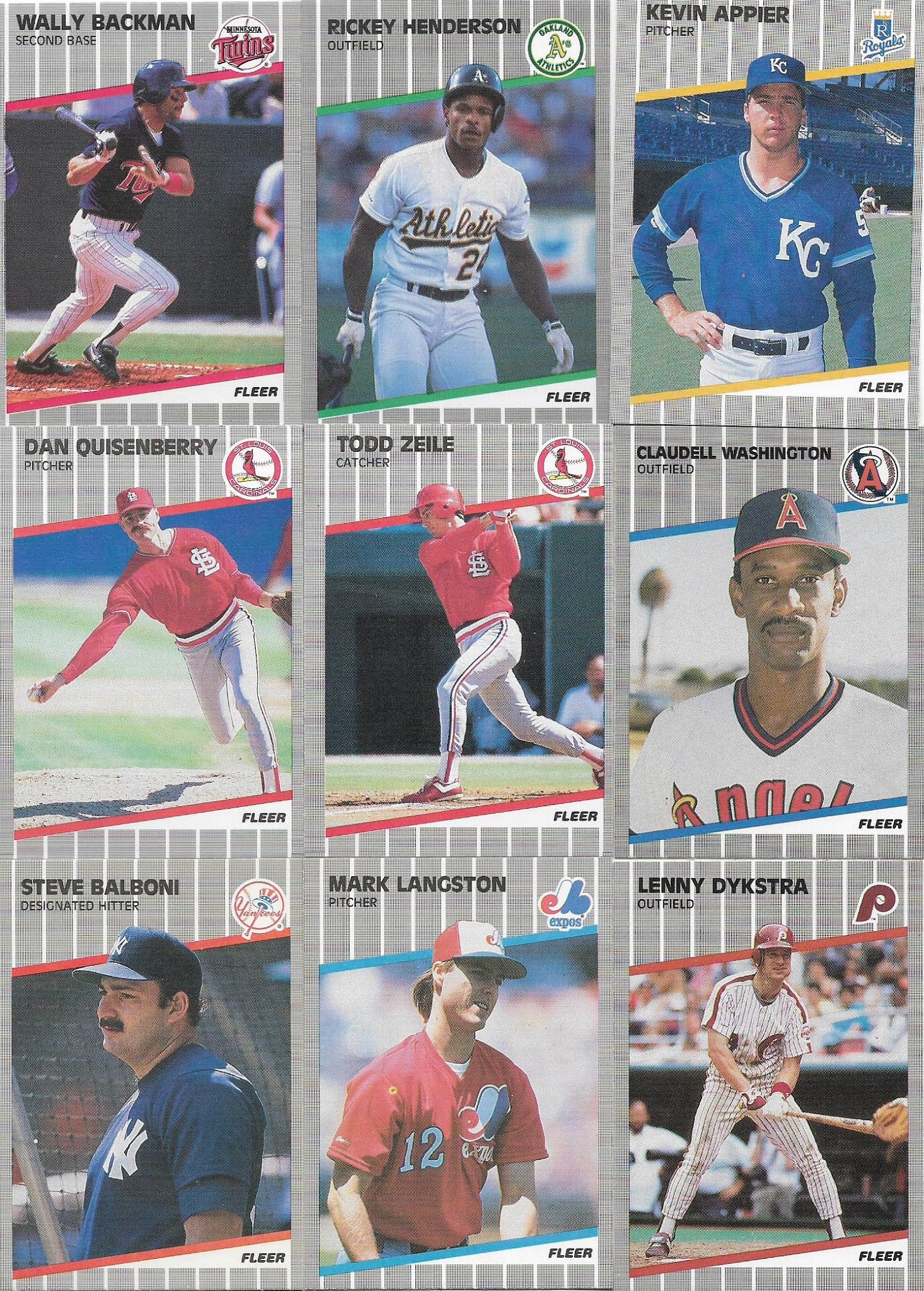 I decided -- why not? -- let's grab some of the Update cards. I've never had any '89 Fleer Update, outside of whatever came in repack boxes.
So I sought out the more notable names and added those in easy-peasy fashion. Because 10 cents. 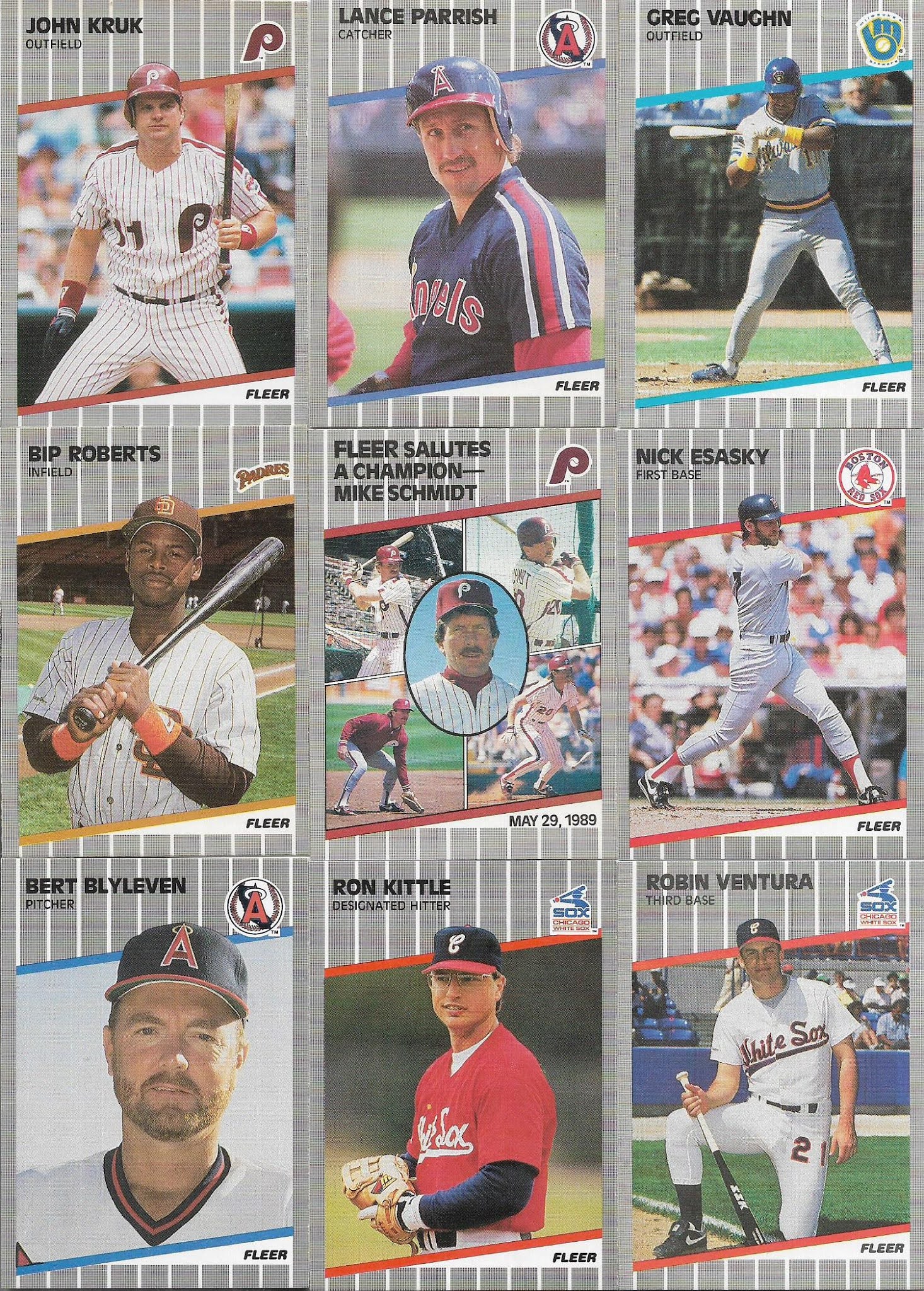 I absolutely love obtaining special cards from the '80s that I've never seen before such as that Mike Schmidt card in the middle. What a rush to see something like that for the first time of one of the players from my childhood. 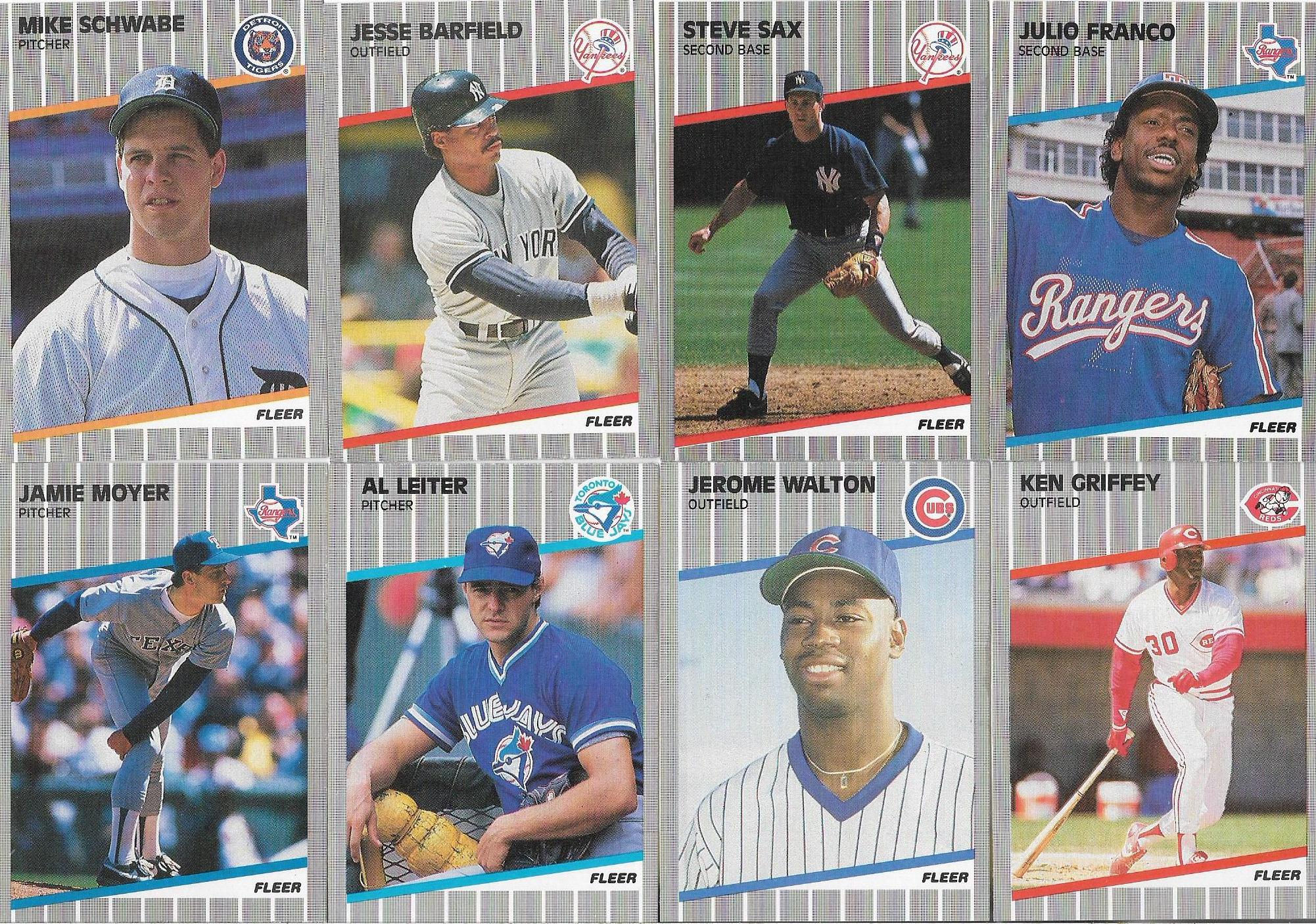 Several more. You may wonder what Mike Schwabe is doing there. I just added him because I've never heard of the name before. Now I can add it to my card inventory. 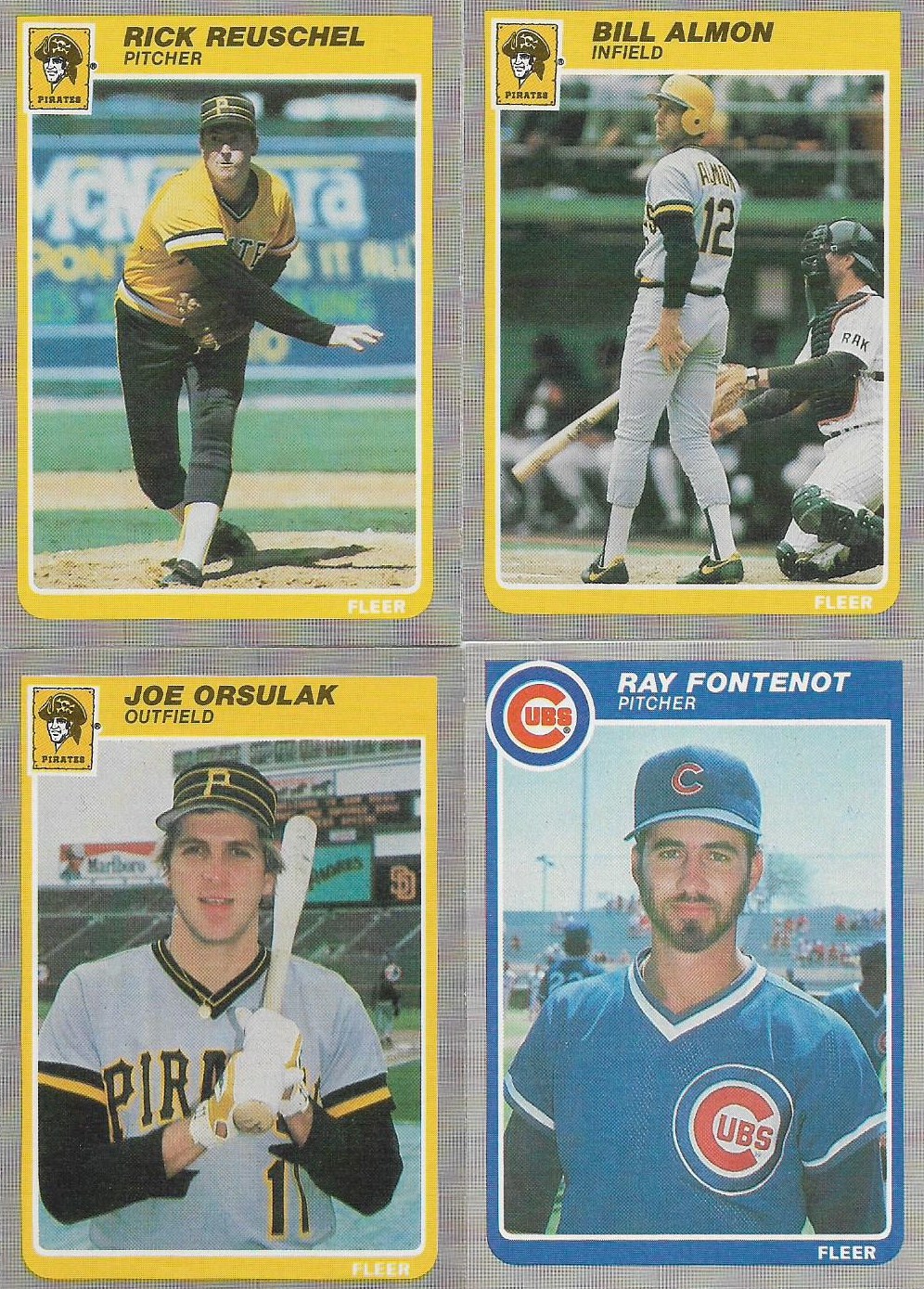 I didn't find any 1985 Fleer available, but I was able to complete my 1985 Fleer Update set with these last four needs. That Joe Orsulak is still haunting me. He has been a pest in more than one '80s completion quest.

My main quest, though, was to find whatever I could from the 1982 and 1983 Fleer sets as those are in my collecting wheelhouse.
Not much from 1983, just these three needs. 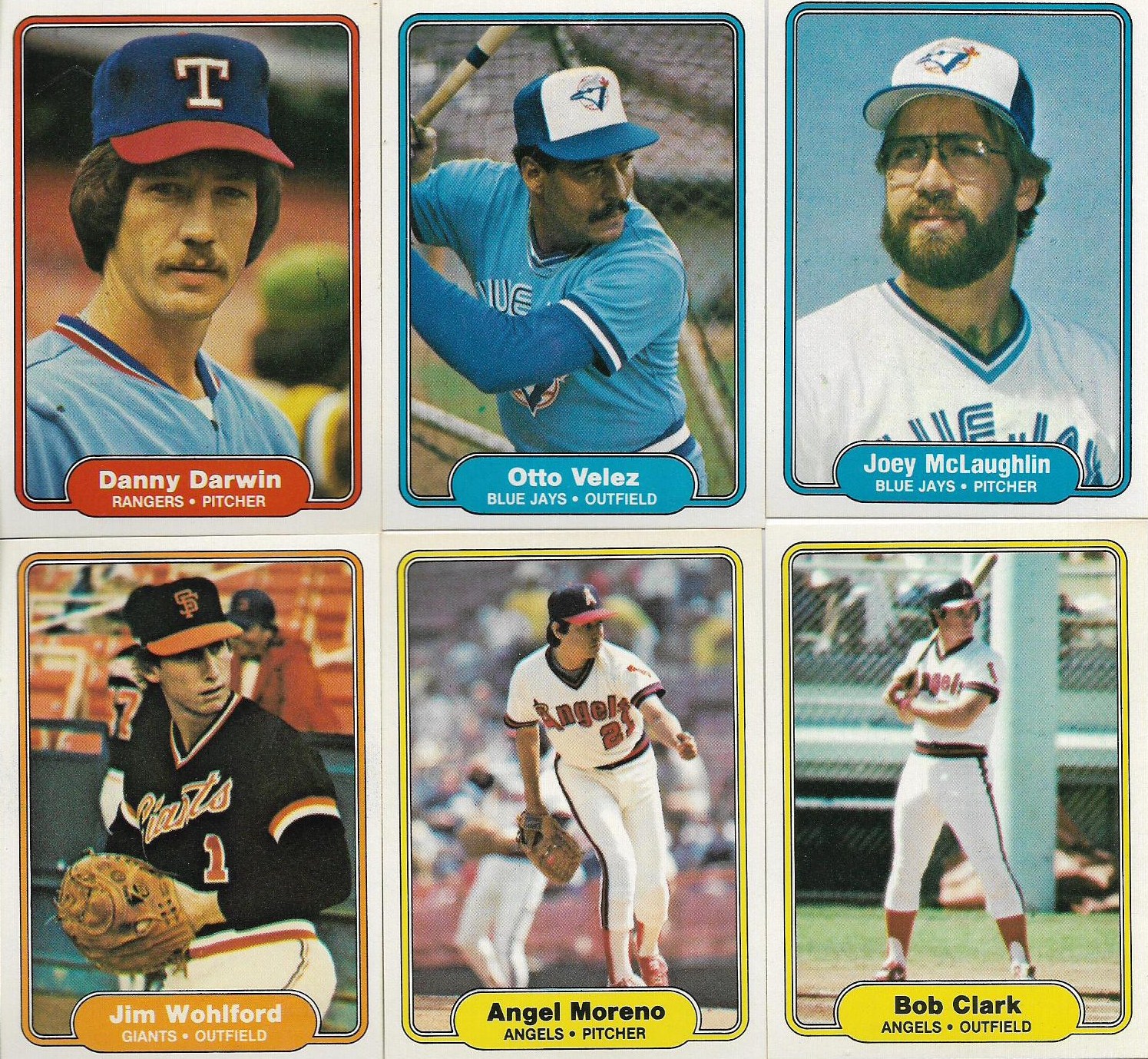 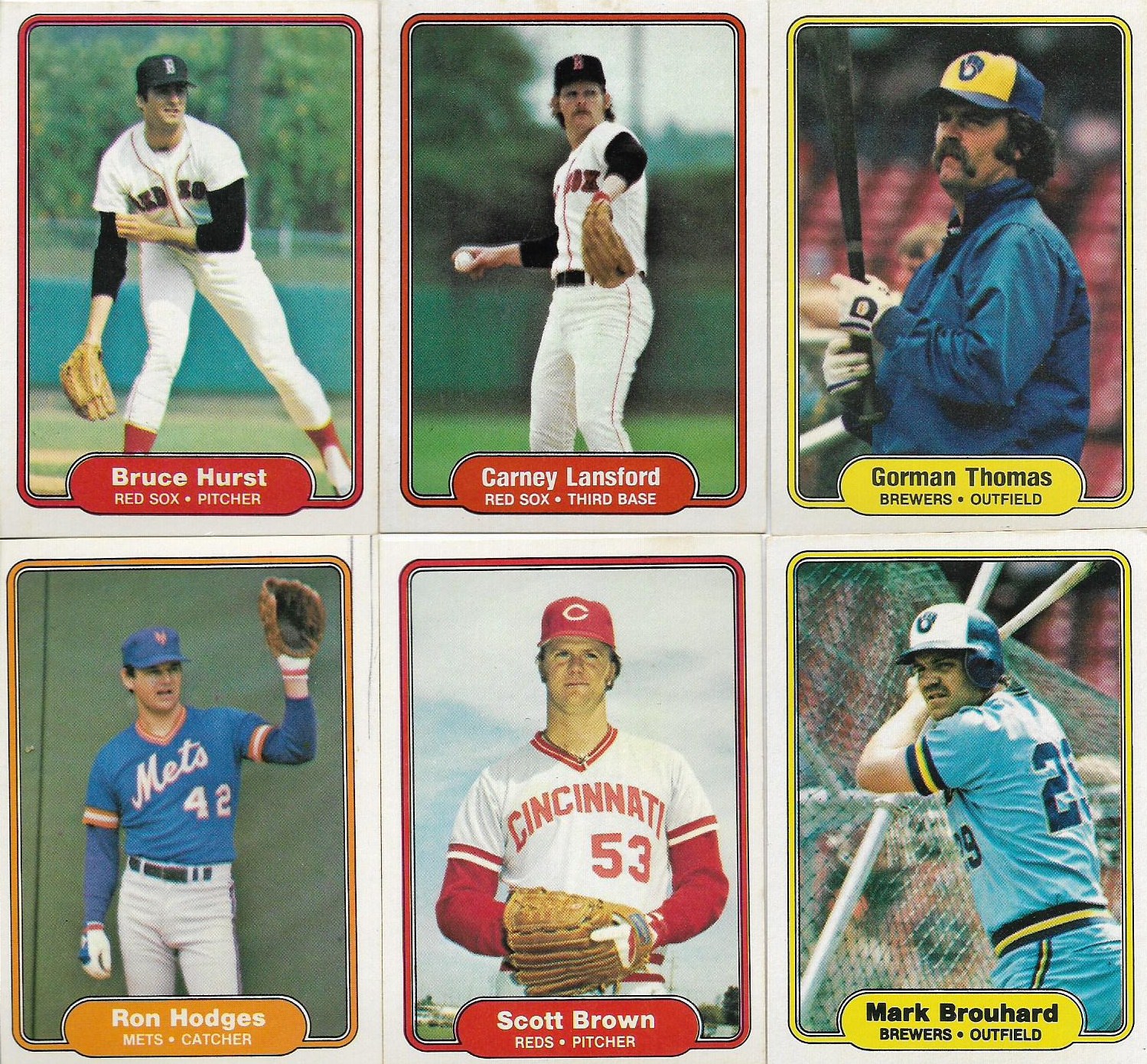 I did better with the 1982 set, which I am very pleased to see. It doesn't seem right to be able to buy a card of Gorman Thomas, or even Carney Lansford, for a dime, but here we are.
With this run through my '82 Fleer want list, I'm down to the final 13. They're all notables in most cases (Tom Underwood, what are you doing with these guys?). People like Rose and Raines and Ryan. I still don't want to pay much for those guys, but I guess it'll be more than a dime.
I'm 17 away from finishing '83 Fleer and 30 or 40 or so from 1985 Fleer. I've been holding off on adding a 1986 or 1987 Fleer list until I get some of these complete. But maybe in 2021 you'll see one of those. 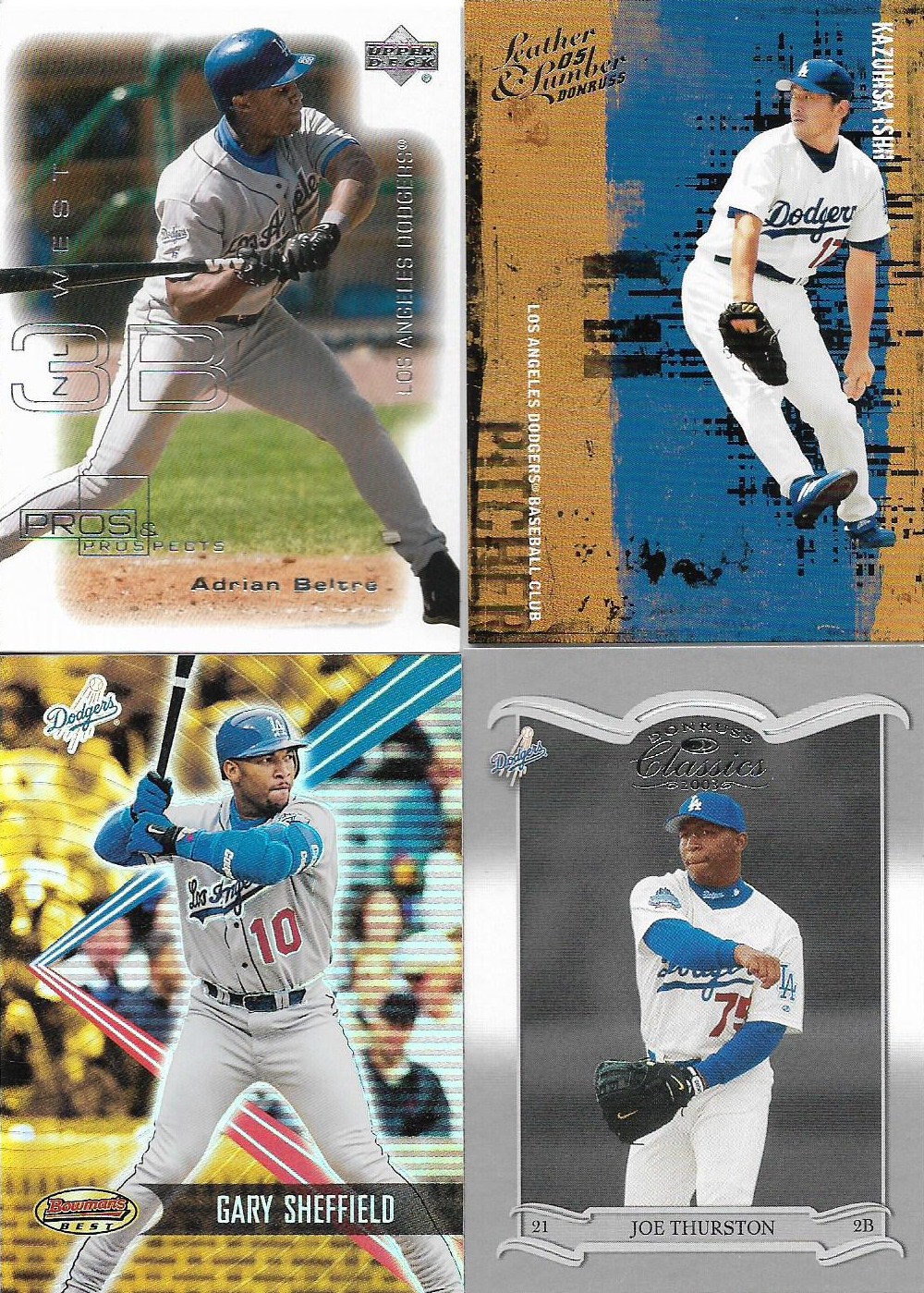 The Dodger pickings were slim, but that's more the fault of my collection than the site. I have 20,000-plus Dodgers, it's going to happen. In fact, that Joe Thurston card I just received not too long ago, so this is a dupe. 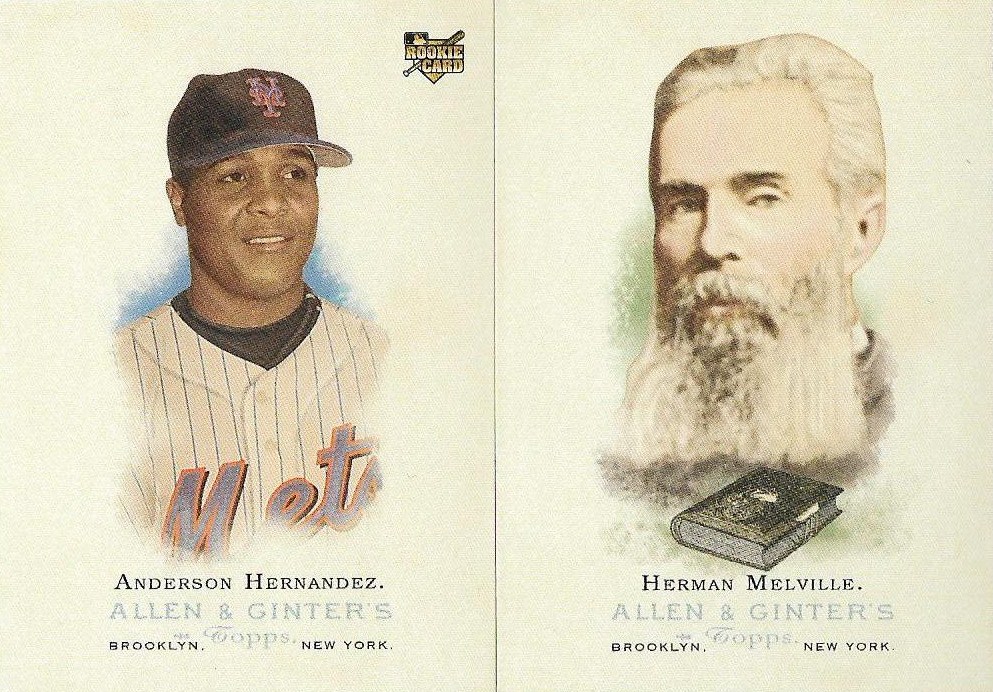 I may have soured on recent Allen & Ginter sets, but I still love the ones from a decade ago or so.
I've completed the 2008-14 editions, but I have precious little from 2006 and 2007. I added two more from 2006. Remember when cool people like famous authors were in A&G? 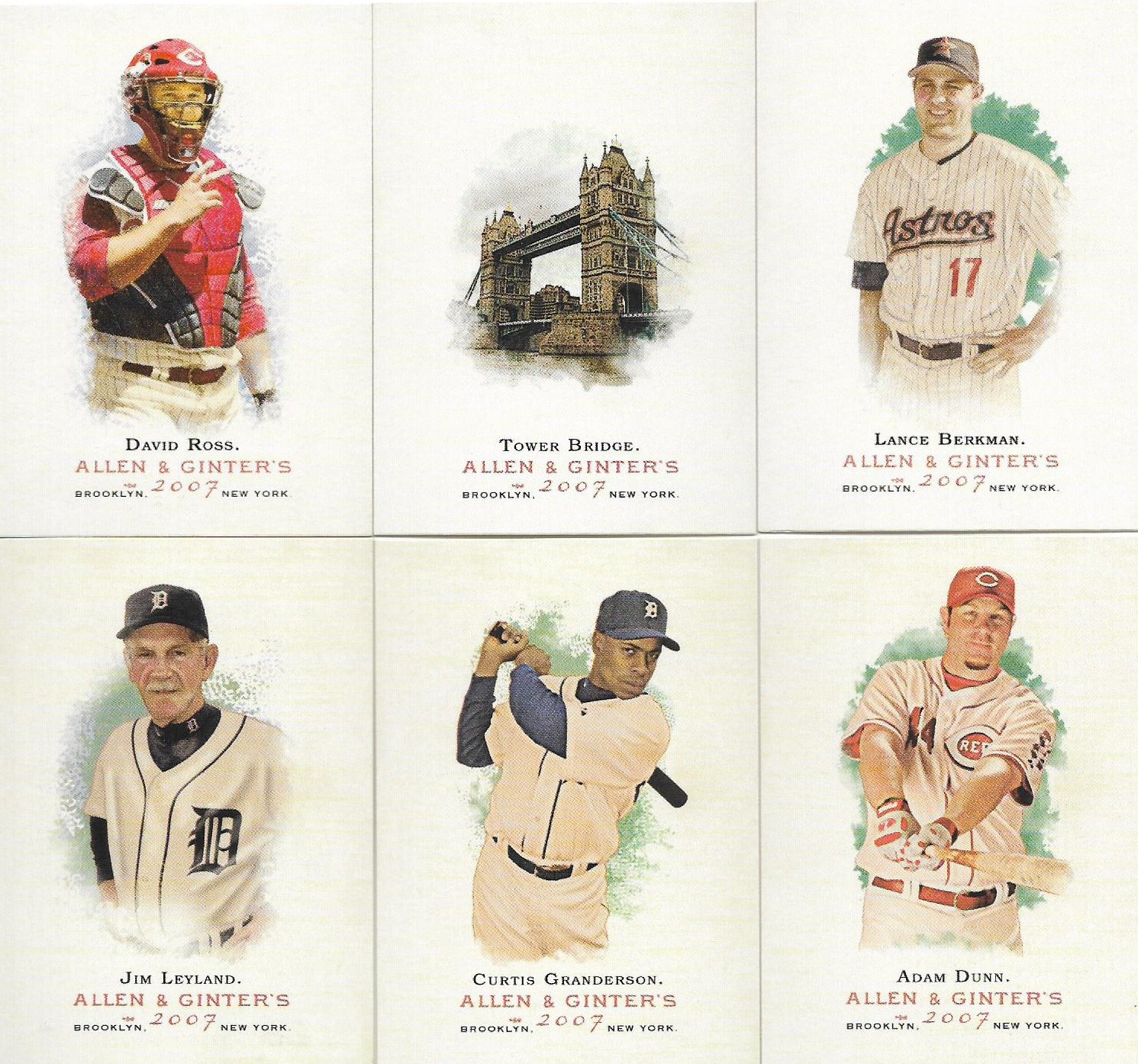 And here are six more from 2007 A&G. Such a handsome set.
Once I finished with what I could find, I paid up and it was something like $7.50.
Now doesn't that make more sense than throwing 20 dollars at a blaster of 2020 Update that doesn't update anything? Or, lordy, blowing cash on something called Panini Immaculate?
No, I think walking to the store to grab two packs of 1980 Topps for a quarter apiece makes a lot more sense. Because the hobby should be cheap.
There are always people worrying about the number of kids in the hobby. Why aren't there enough kids? Why oh why?
Well, there are reasons for that. A lot of them.
One of them is: the hobby isn't cheap anymore.

Peter K Steinberg said…
The Schmidt card is awesome. Thanks for buying it and sharing it. Nice Kruk, too! That's one of the reasons I really like collecting him. I loved him as a player when I was in my teens and now I can get many of his cards for reasonable (and often cheap) prices.
November 19, 2020 at 8:11 PM

Sean said…
One thing I like about collecting baseball cards in Japan is that the oldest card maker here, Calbee (Kind of Japan's version of Topps), only sells its cards in packs that are attached to bags of potato chips. These are available in most grocery and convenience stores throughout the country for about 75 cents each all spring/summer/fall long.

There is another card maker that has followed all the worst impulses of the American market and basically just caters to grown up collectors with money now, and it sucks.

But Calbee cards are just as accessible to kids today as they were 40 years ago. I wish Topps would have stuck to its guns like that.
November 19, 2020 at 8:34 PM

bbcardz said…
As a low-budget collector, I'm completely in agreement with you. Thank goodness for baseballcardstore.ca, Steve rocks.
November 19, 2020 at 8:51 PM

John Bateman said…
That Cheapness gave us a lot of joy growing up collecting, what I would not give for Topps to make a set using 1983 non glossy brown bendable card stock (Heritage is too thick) one last time (I know I would have to pay alot more than I did in 1983). I know it is a dream but I could only hope. Thanks I received the set. That was very BIG of you.
November 19, 2020 at 8:53 PM

Old Cards said…
Agree. it should be cheap, but shipping should be too. I think a dollar should be the max. Otherwise, the good deal you got on your cards is canceled.
November 19, 2020 at 9:15 PM

Jeff Laws said…
If I remember right, which doesn't mean I am, 1985 Topps packs were $.35. I would ride my bike 3 miles, one way, to get a pack. The next day I would find more money in the couch or wherever, and ride back down again.

Fuji said…
80's baseball cards will forever hold a special place in my collection for so many different reasons. The fact that they're still affordable after all of these years is just the cherry on top.

Billy Kingsley said…
Melville is actually distantly related to me. I don't remember the details but it's really distant.
November 20, 2020 at 3:53 AM

Mark Hoyle said…
Listened to the interview it was enjoyable. Gotta love the early Fleer sets
November 20, 2020 at 4:31 AM

GTT said…
I guess as a kid in the hobby, I can kind of give you the inside story. I almost never buy retail any more. Very very occasionally, like if I find a really good deal or I'm suffering pack-opening withdrawal, I'll buy a pack. Almost all of my budget goes to vintage and dime box cards.

Spending $3 for 16 cards is ridiculous to me because I can get 30 cards for the same price in a dime box. And not just random cards,but ones I can pick and choose. Yankees and players I collect.

Maybe some day Topps will hear the pleas of the collectors, not the investors. Until that day, which I expect will be one of the signs indicating that the Messiah is coming for 2nd time :), I'll collect cards my way.
November 20, 2020 at 10:16 AM

Matt said…
I just recently finished the '89 Fleer set myself. A part of me considers it a blessing that the cards from my childhood are the ones that are cheap and easily attainable. I feel sorry for the small number of young collectors today who may step away and come back in the future. I don't think they'll have that same fondness we do.
November 20, 2020 at 11:07 AM

Nick said…
I've always believed that accessibility is the key to luring more people to any given hobby/vocation. Seems like baseball cards are going the other way there. It's always a joy to find cheap cards, but I worry that the rising prices and limited accessibility of cards nowadays will just plan drive people away in the long run.

Matthew Glidden said…
Ron Kittle wearing a glove on his "designated hitter" card is a fun bit of gamesmanship. Thanks for sharing your pictures of the lot.
November 21, 2020 at 9:36 AM