The hits just keep getting harder to find 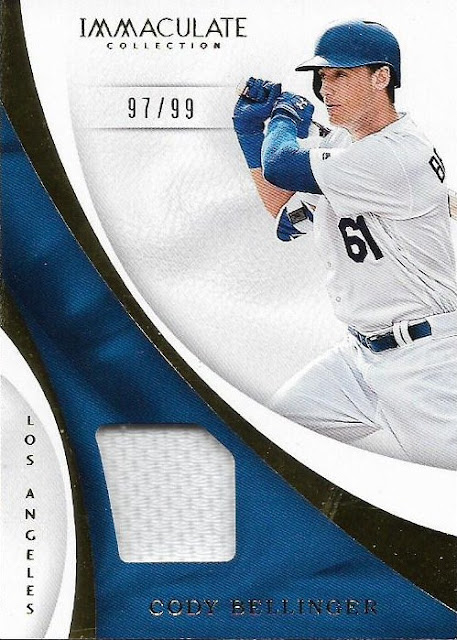 I don't know if it's true, probably not, but at least in my collecting experience it is. Finding hits -- autographs and relics -- among modern cards isn't as easy as it once was.

I doubt that card companies are making hits in fewer quantities, especially Panini, which seems to issue relics as frequently as the 800 million different parallels it creates. But I think the combination of me not seeking out hits (you won't find any hits listed on my want lists) and a somewhat less interest in collecting hits among my blogging buddies is leading to fewer hits from more recent cards in my collection.

Take, for example, Cody Bellinger. This Panini Bellinger relic is the first Bellinger "hit" in my collection. I didn't even know what his signature looked like until I looked for it when researching this post. It's not pretty.

Bellinger has been appearing on cards regularly for four years but this is hit No. 1. I know he's a young star, the defending MVP, and a lot people collect him, but I was already accumulating Clayton Kershaw hits three or four years into his MLB career with greater ease.

I now have 16 Clayton Kershaw relic cards. Most are from pre-2012 but there are a few -- including one I pulled myself -- from the last six years. (The autographs, meanwhile, have dried up. I'm not paying those prices).

I have my doubts I'll be able to accumulate the same number for Bellinger by 2029. It's possible, I guess, if I make it my mission. But I don't see myself doing that. Priorities have changed.

But that doesn't mean I don't welcome them. It's actually a milestone that I now have a hit to go along with the 168 other cards of Bellinger that I own.

This 2017 Panini Immaculate Collection Bellinger card came from reader simpson. It was a response to the free Dodgers I distributed to him and others. I do not expect at all for anyone to send me cards in return and I'm not just saying that. It's not a thought in my head, really. But I sure do appreciate when it happens. 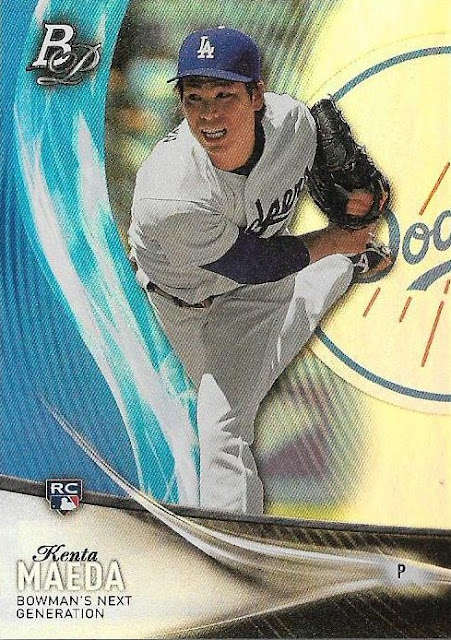 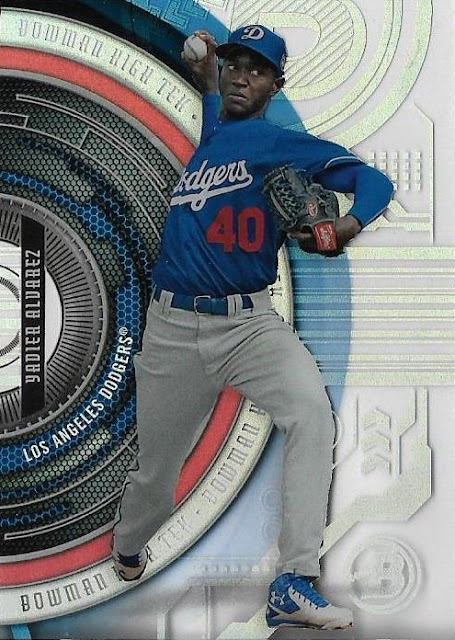 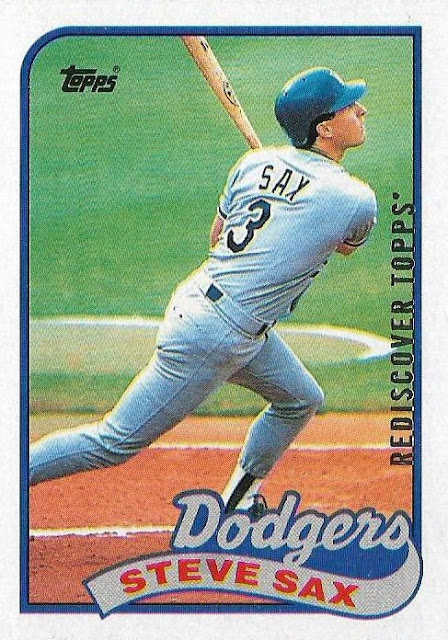 A few others that are new to my collection (I use "new" in quotes for that '89 Steve Sax card). It's a bit disconcerting how well Kenta Maeda is doing for the Twins these days. 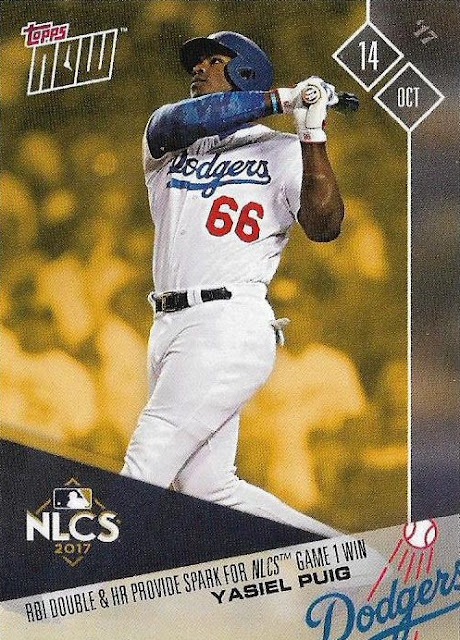 Here's a Topps Now card from the 2017 NLCS, marking Yasiel Puig's performance in Game 1 against the Cubs.

You won't find the Dodgers' opponent mentioned on this card. These Topps Now postseason cards are a little too bare-bones for me. They could at least get the opponent and the score on the card. All that space on the back and just another giant photo of Puig? Here, I'll help you: the Dodgers beat the Cubs, 5-2. Now was that hard? 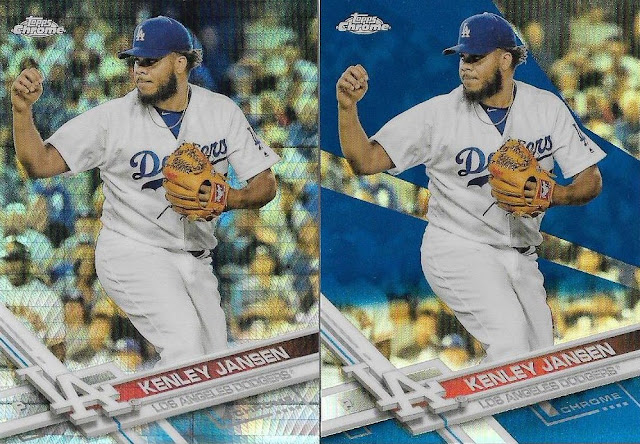 This is where simpson bombarded me with 2017 Chrome Kenley Jansen parallels. He sent three, but I already had the refractor. The blue refractor and the prism refractor (not to be confused with the retail-exclusive xrefractor, lordy, Topps) were new to me for someone I still consider one of the Dodgers' few weak links on the team.

That's a pretty cool surprise package (sorry, simpson that Chicle Ramirez isn't the one I need, it's the other rarer one) with the majority needs and finally getting a Bellinger hit in the collection!

I hope it's not another four years before the second one makes my collection.

And, yes, I know, I can do something about that myself.

Elliptical Man said…
Interesting song choice. "Hit Me With Your Best Shot" doesn't do it for you? Or "Patches", with its uplifting tale of teen suicide?

Peter K Steinberg said…
I was thinking that instead of aiming for a Bellinger "hit" every four years, why not try to add one for every 168 that you acquire? I think maybe Bellinger will figure it out, but he seems to run hot and cold in alternate years.
September 5, 2020 at 7:30 PM

Zippy Zappy said…
As far as I can tell relics are still a thing but just barely as the attention has shifted far more towards autographs. They're plentiful in numbers but when you consider that the average collector (at least in your and probably my orbit) probably isn't breaking cases of the newest product, chances are very good that no one is hitting them.
September 5, 2020 at 8:46 PM

jacobmrley said…
I would agree with your basic premise, except the last two retail things I've opened had autographs in them, one a redemption for a Luis Robert rookie auto, so I am just going to shut the fuck up now.
September 5, 2020 at 9:09 PM

Chris said…
Simpson is very generous to send a Panini Immaculate relic of a superstar. That's the only high-end product I would gamble on.

Perhaps Topps (and Panini) are holding back the star player autos for their 'two cards for $200' products? I've never seen a Bellinger auto, but I've seen Yimi Garcia's signature quite a few times.
September 6, 2020 at 10:54 AM

Fuji said…
I enjoy collecting "hits", but outside of the Archives Fan Favorites autographs and the Topps Holiday relics (which were super cheap for the most part)... I don't really chase them nearly as much as I used to. But show me a jersey card or on card signature from the 90's or a hat or base relic card from the 2000's and I'll probably be interested. Like you stated... priorities have changed.
September 6, 2020 at 11:05 AM

Billy Kingsley said…
There are definitely less being made now. I suspect it's due to the non collector profiteers whining about them constantly.
September 6, 2020 at 5:53 PM

simpson said…
hey, glad you enjoyed the cards, never would have guessed so many would be new to your impressive collection, including your first belli hit - nice! bummer on the manny, I wasn't too sure when I sent it but figured what the hell. cheers and thanks again!
September 10, 2020 at 9:30 PM