The best Dodger card for every year I've collected, 2020 update 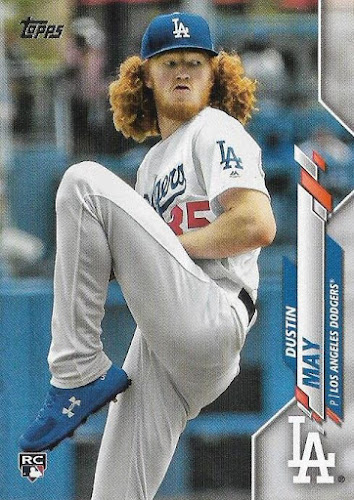 It's been 45 years since I first opened wax packs of baseball cards back in 1975.

I've collected cards most of those years since and every year that I've opened packs, I've hoped that there were Dodgers harbored within.

Well, it's time to update that post with the 2020 Topps card.

I've accumulated all the base Dodger cards from 2020 flagship and what a mind-numbing haul that is! I'm already on record as saying the 2020 design is dull and it's grown progressively more boring as the months in solitude, staring at my collection, have gone on.

I've never been a fan of designs that force photographs into a certain space and that's what the 2020 design does. There are too many "player straight-up-and-down" photos. It's very repetitive.

And it gets worse: 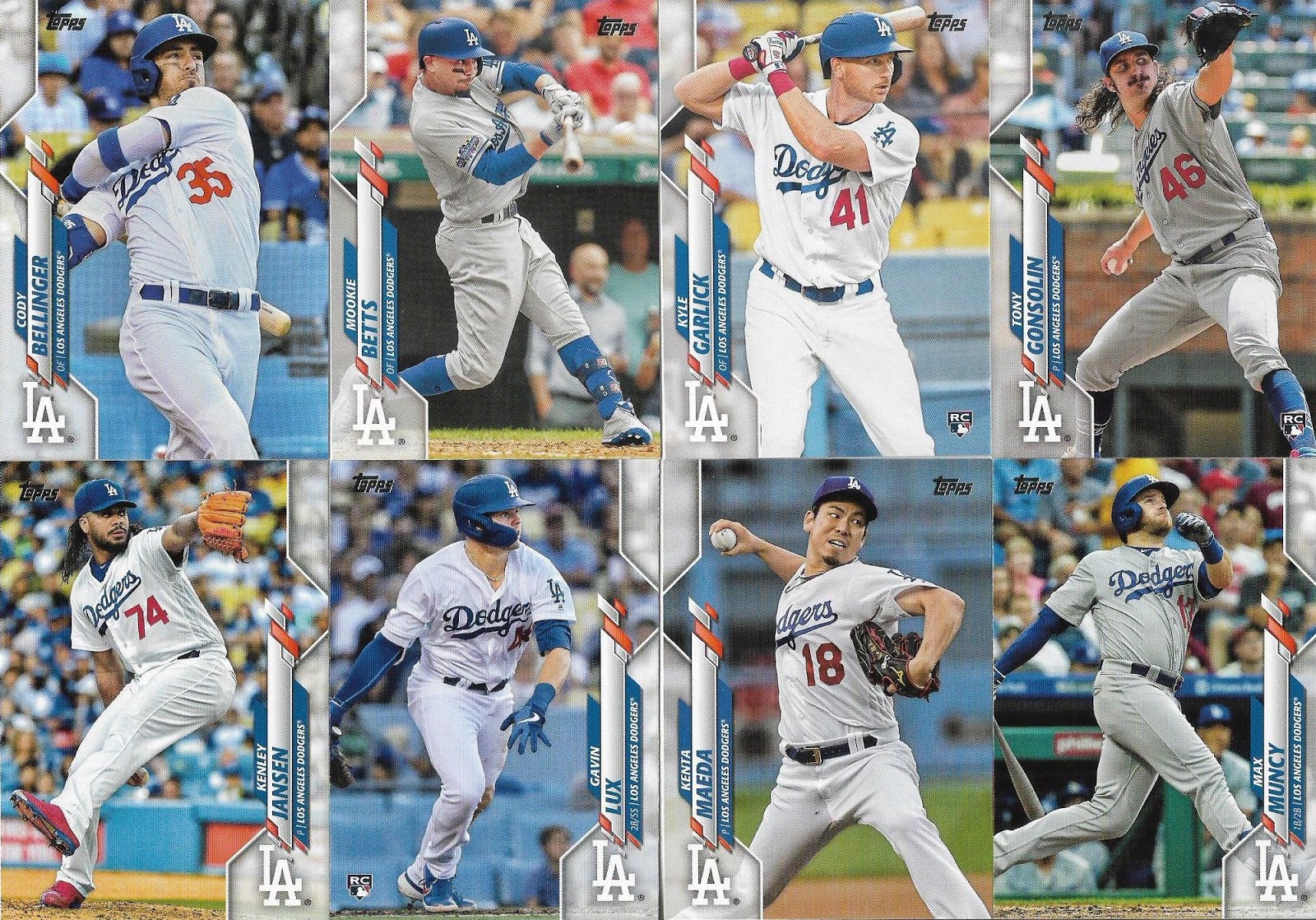 For some unknown reason -- I'm going to chalk up all these puzzling questions from now on to "Topps doesn't care about the base set anymore" -- a huge chunk of the Dodgers cards this year show players in action only facing to the right. This isn't all of them. 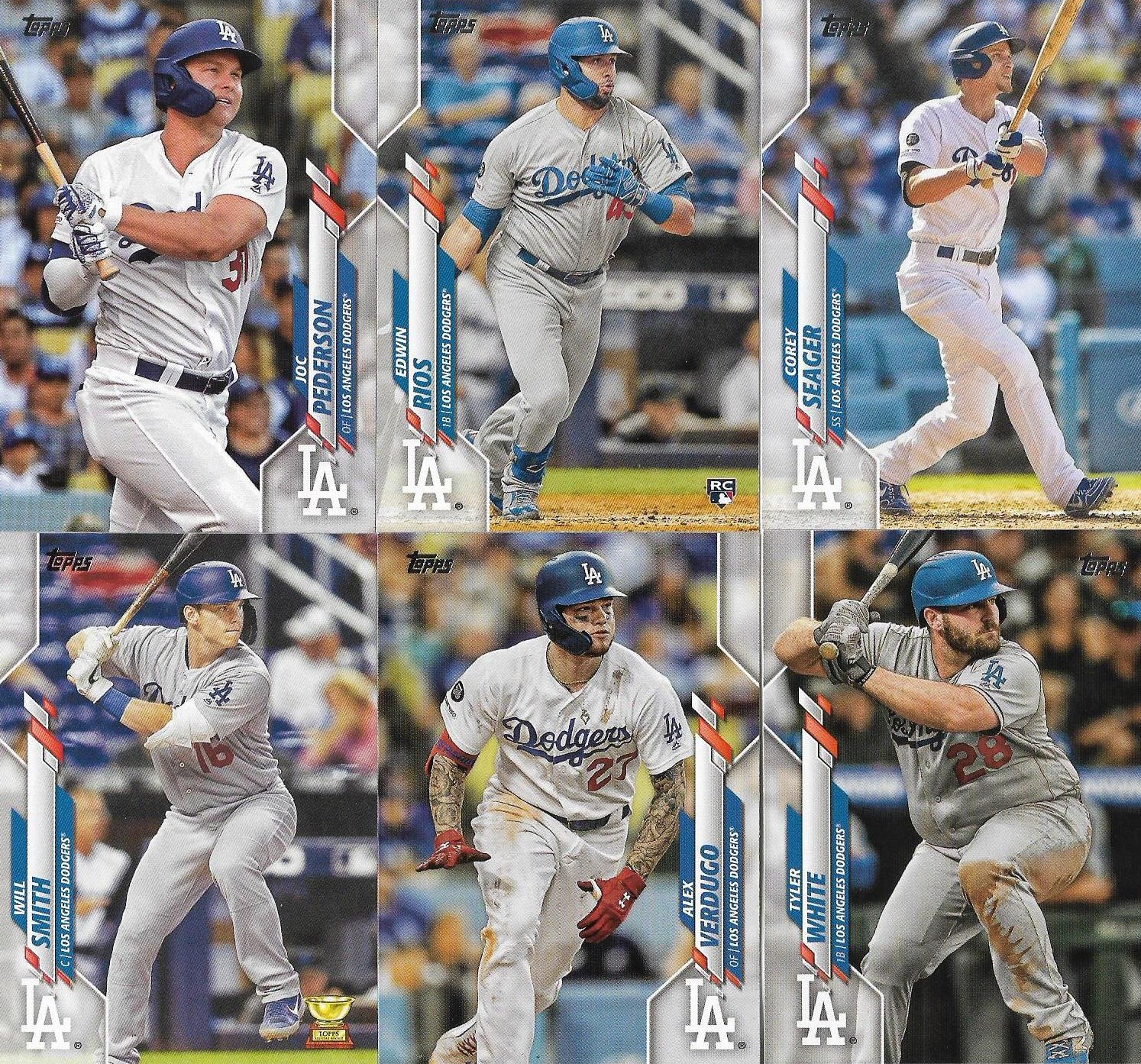 There. Now that's all of them.

Why? Can't we mix it up a little more? Isn't it bad enough that almost everything is the same crop and the same look? 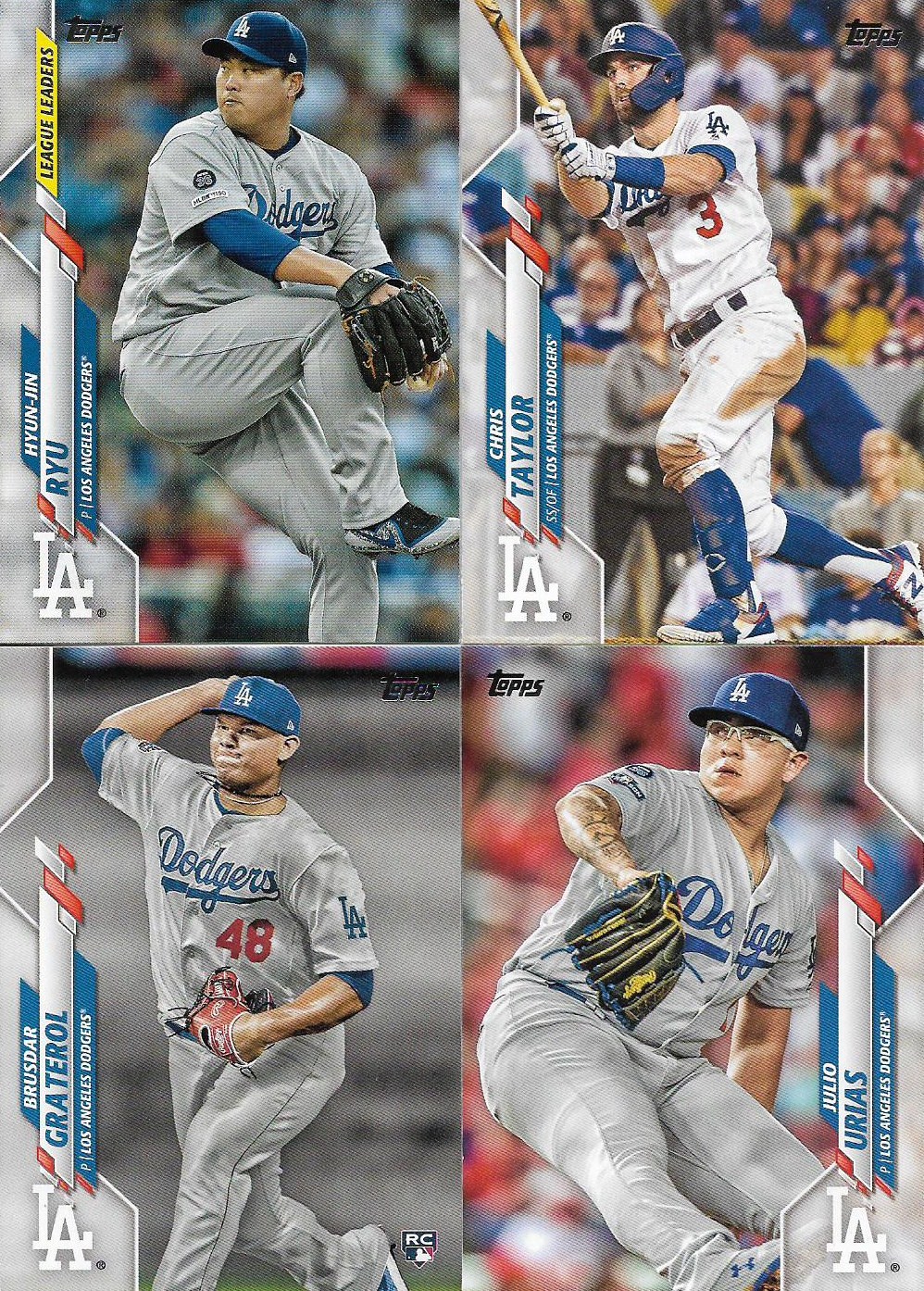 These are the only four Dodgers facing left on vertical cards in the team set.

All right, with all of that, is there any hope of finding a card worthy of being defined as the best?

I was tempted to name the Dustin May card at the top of the post as the best just because of his wonderful Carrot Top hair. But, no, May is merely the second runner-up. 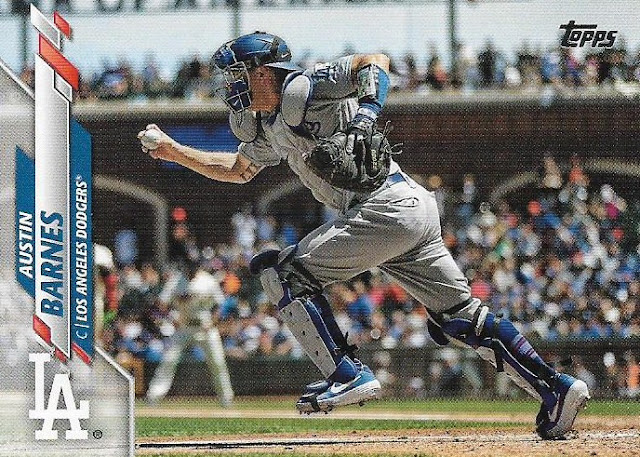 Here is the runner-up. Austin Barnes was one of the runners-up last year, too. In 2019 he was captured looking to the skies for foul pop up, along with Andrew McCutchen, who was a Giant at the time. I couldn't bear to make a card my favorite Dodger card of the year with a Giant lurking in the background, so I went with the Kiké Hernandez card as the top 2019 card.

Barnes continues with the Giant theme on his 2020 card as he's shown in the middle of a rundown in the Giants' home park (don't ask me what they're calling it these days).

But he can't run down the 2020 best Dodger card because the best card belongs to Kiké once again. 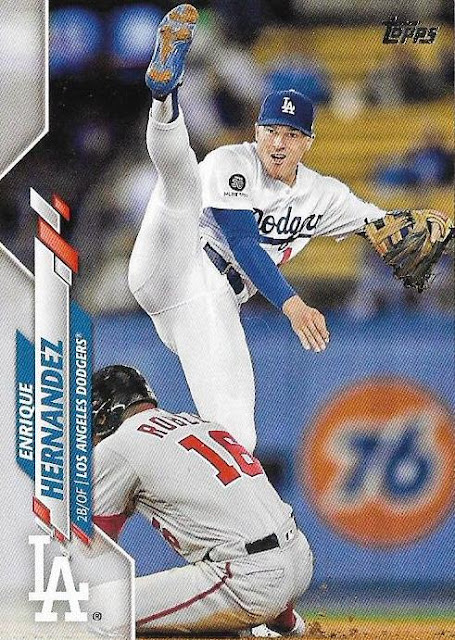 That is a most unusual card and it's especially unusual because of the sameness of so many of the other Dodgers cards.

OK, all that's left to do now is go through the recap, this time for a full 45 years. Here are my favorite Topps Dodger cards for each year:

Pedro Guerrero - 3
Ron Cey - 2
Kiké Hernandez - 2
Orel Hershiser - 2
Clayton Kershaw - 2
Tom Lasorda - 2
Raul Mondesi - 2
Hideo Nomo - 2
I suppose Yasiel Puig could make the argument -- and he would -- that he should be in the club because of his prominent role on Ricky Nolasco's 2014 card.

All right, that's all I have for you today. Collecting for 45 years can wear you out.

John Sharp said…
This is a great idea.

I'd love to do this, and for a start, the best Tigers card from 1968-1977 would be a Bill Freehan card, and, the last few years would be Matt Boyd cards.

runfore!kelloggs baseball cards said…
Everyone knew what the first one would be. That 1976 Marshall is great.
September 14, 2020 at 10:34 PM

Fuji said…
A. This is such a cool idea for a post. I'm tempted to do this for the A's, but right now isn't a good time.

Shlabotnik Report said…
I've also thought about stealing this idea, but I'm just going to let this be your fun thing.

I would guess that since they're using Getty for images, a lot of shots are taken from the first base side, hence the samey-sameness.
September 15, 2020 at 9:54 AM