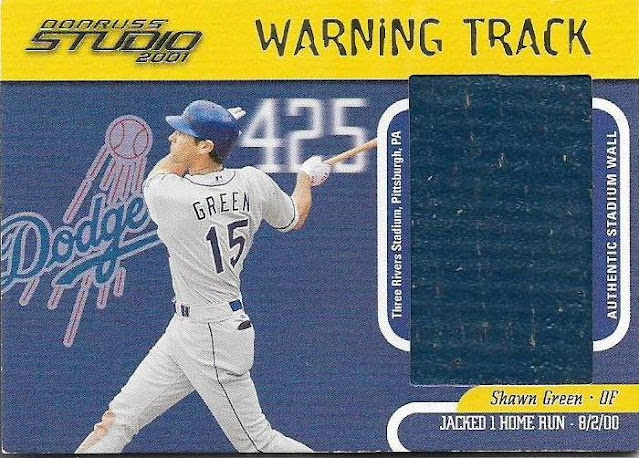 Sometimes the ideas just aren't there when discussing cards that I received from someone. Making these trade posts "readable" is what I do, but, damn, occasionally the brain stalls out.

That's the case today (well, the last 48 hours, really, I try to plan ahead), so let's immerse ourselves in the card instead. That's what some of you want me to do all the time anyway, right?

(Note to reader: I am writing this entire post on the new Blogger layout because the "revert to legacy Blogger" link has apparently disappeared forever, so if you see formatting issues or see the post end abruptly as I rage-quit my laptop, you'll know why).

This Shawn Green "Warning Track" Donruss card was the star of the envelope sent to me by Daniel of It's Like Having My Own Card Shop. He recently and generously offered to send out cards to card bloggers based on their specific requests. I would never say, "I would like a card with a bit of wall in it, please," but Daniel seems to know my unspoken card thoughts.

(My goodness, new Blogger is annoying, why isn't there enough space between paragraphs?)

Cards that contain bits of material from items that are not a uniform are wonderfully weird. Some are thrown on there with absolutely no attachment to the player. But Donruss tries mightily to make the connection between Green and the wall by specifically using a piece of wall over which Green hit a home run!

OK, so Green never touched the wall. He didn't slam into it either. The ball he hit didn't even strike the wall (because that wouldn't be a home run, would it?). But Donruss is really trying here, really, really efforting, and I can respect that.

Donruss gives the date of the home run -- August 2, 2000 -- and tells you which stadium witnessed the feat. 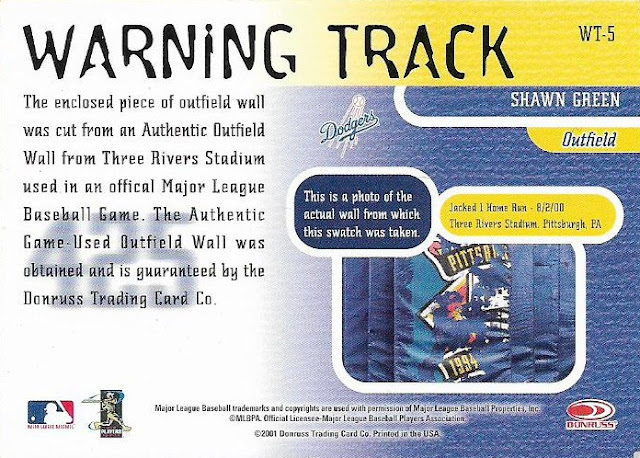 The piece of wall is from a stadium that no longer exists, Three Rivers Stadium in Pittsburgh. Donruss actually shows a picture of the wall that gave up the swatch for this card. Don't concern yourself with the ballpark workers who desperately repatched the wall to cover all the spots where scraps were removed for baseball cards. The Pirates moved from Three Rivers to PNC Park in 2001 so Pittsburgh's old park was in "everything must go" mode.

The phrase "game-used wall" makes about as much sense as saying the discarded plastic beer cups littered in the stands are "game-used," but I suppose this card is all about wall not words. 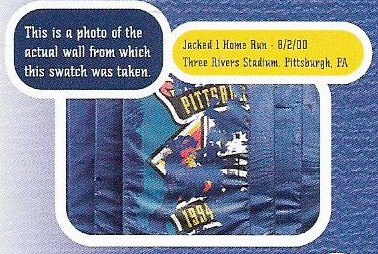 Notice that the home run was JACKED.

No further detail on the particulars on this home run. But heading to handy retrosheet.org, Green hit his 18th home run of the year in the first inning against the Pirates on that Aug. 2, a three-run shot as the first three batters in the game reached base in a four-run inning. Starting pitcher Jose Silva (there's a name I don't remember at all), gave up the homer and lasted just two innings in an 11-5 Dodgers victory.

I'm not much of a relic collector, as you know, so the vast majority of the relics I own are the typical white or gray jersey swatches or bat pieces.

I'm happy with those but it's nice to get a little something different -- it's worth a blog post anyway -- from a cap or shoe or pile of dirt.

I just went through the relics I own and less than 10 of them feature an item that is not a jersey or bat, so, yup, this is something special -- unusual anyway. 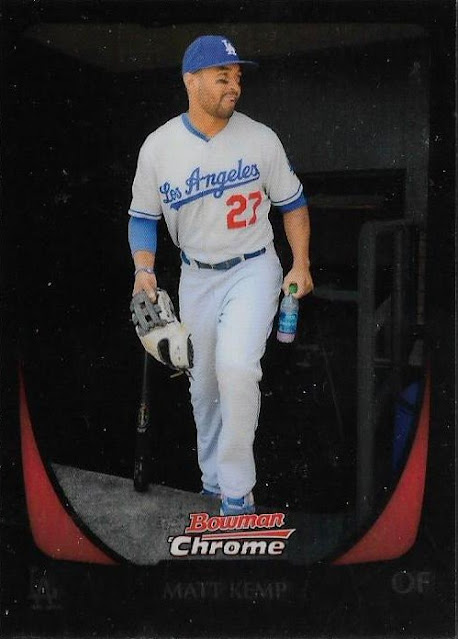 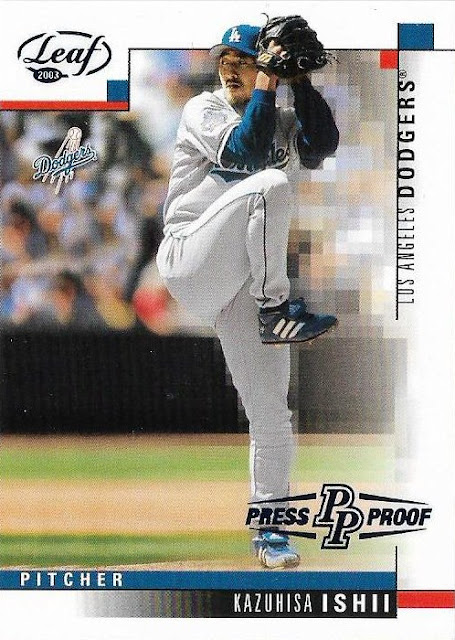 Daniel added a couple of other needs to the envelope. That Matt Kemp Bowman Chrome card from 2011 sat on my Nebulous 9 list for much longer than I expected. As for Kaz, I've never been much for stamped parallels but I can't argue with a card numbered to 50.

OK, I guess I found something to say.

Now I only hope that it's readable.

Nick Vossbrink said…
Oh neat. Relics don't hold my interest in general but you're absolutely right that weird stuff like this is cool.
September 17, 2020 at 8:10 PM

Nick Vossbrink said…
Also. Good lord what the heck happened to the Studio brand? That seems like a textbook example of how all well-defined products eventually creep toward the same mishmash center as everything else.
September 17, 2020 at 8:11 PM

bbcardz said…
Never bought/collected Donruss Studio but that is a cool piece-of-wall card. Looks almost as cool as 2004 Topps Series Seat relic cards (unfortunately no Dodgers in that relic set).
September 17, 2020 at 8:32 PM

Brett Alan said…
I've got one of those Three Rivers wall relics from the same set. Mine if Ivan Rodriguez, with the text pushing that he played in the 1994 All-Star Game there. (He had 2 hits, but not a home run. Maybe one of those hits went off the wall?) Pretty odd, but I guess you're right that it adds some variety to a relic collection.
September 17, 2020 at 9:14 PM

acrackedbat said…
revert to legacy link is gone... I've sent a different complaint daily. To me, the most annoying thing is "the redirect" for every blog in my reading list. "This page is redirecting you" but it never does. I use Chrome. It should work. Cool card though!
September 17, 2020 at 9:29 PM

Mike the History Teacher said…
I'm not a fan of relic cards either, but having a piece of a ballpark that no longer exists is a nice idea. I have some bricks from the Old Comiskey Park, and if there were a thin slice of one of those in a well-designed card, I would add it to my collection.

For some reason I seem to remember a set of Ty Cobb's dentures selling at auction several years ago. Now that would be an awesome relic card -- an iconic ballplayer's tooth! (I know, Ewww. But awesome at the same time.)
September 18, 2020 at 12:12 AM

madding said…
The most frustrating thing about New Blogger is that the behavior completely changes with every new day/post.
September 18, 2020 at 3:02 AM

Fuji said…
I switch over to the new blogger to force myself to get used to it... but was happy whenever I saw the "revert to legacy Blogger" link, because it felt like a security blanket. I could turn back if I needed to. Kinda stinks that it's officially gone now.
September 18, 2020 at 9:42 AM

Matt said…
@acrackedbat (or anyone else interested) - If you're reading the blogs on a computer, I've found that right-clicking the blog link and opening in a new tab bypasses the redirect page. Still annoying as hell though!
September 18, 2020 at 9:52 AM

Swing And A Pop-up said…
I've never seen the "game used wall" cards...I do like obscure relics like that...although I will have to draw the line if it ever gets to something like "game used sunflower seeds".
September 18, 2020 at 11:30 AM

Bo said…
That's actually really cool for a relic. It's a relic not just for the player but for anyone who played in that ballpark (at least that season - I don't know how often they switch out the wall padding). I could see someone like Gavin extracting the piece and making it, say, a Barry Bonds or Dave Parker custom card.
September 18, 2020 at 12:28 PM

Troublewiththecurve.net said…
That's a neat card. I too noticed the word "jacked." I even smirked a bit when I saw that the word was followed with only "1 home run on..." I guess the word "jacked" was setting me up for something like "4 home runs in one game..." or something. Seemed a bit anticlimactic.

"Sean Green ABSOLUTELY RIPPED THE COVER OFF OF THE BASEBALL with a grounder up the middle for a single..." (This card features a shoelace from a fan that was watching the game virtually in Boise.)
September 20, 2020 at 9:44 AM

Michael Ott said…
I find it hard to get excited about 'event-used' relic pieces, but I dig having chunks of a stadium embedded in my cards. I particularly like the 'BenchMarks' inserts (with slices of dugout benches) from 2001 Donruss Classics.
In case you were wondering, Green and Jose Silva were likely teammates (briefly) on the 1996 Blue Jays.
September 20, 2020 at 9:29 PM