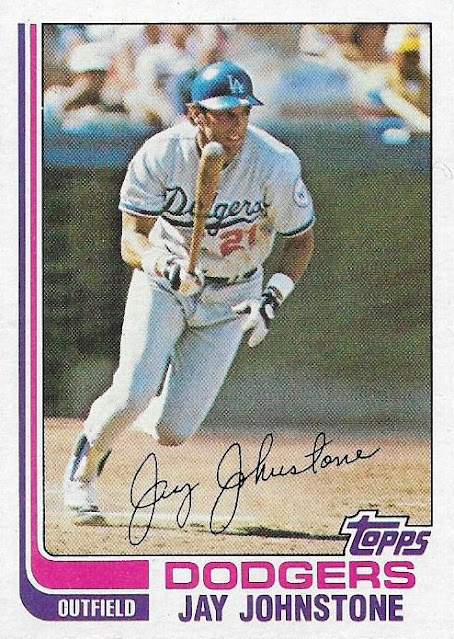 I am not as obsessive about variation and error cards as some collectors, particularly when it comes to the minute "errors" that people chase with cards from the '80s.
Even with some of the larger differences, I can't be bothered. It's kind of like: if it wasn't common knowledge when I was collecting then it doesn't matter.
I knew about "blackless" 1982 Topps cards before I started reading card blogs, but it wasn't much earlier than that. I barely gave it a thought. In fact, to show you how much I paid attention, I thought people were referring to cards that were "backless". 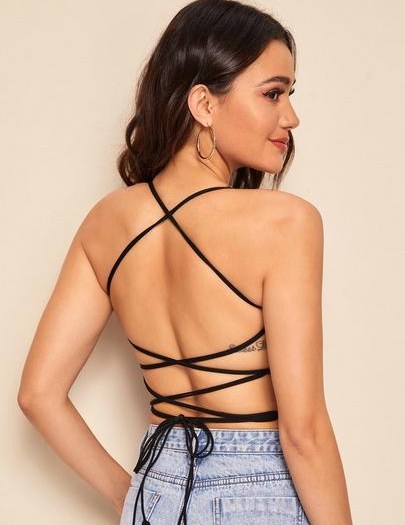 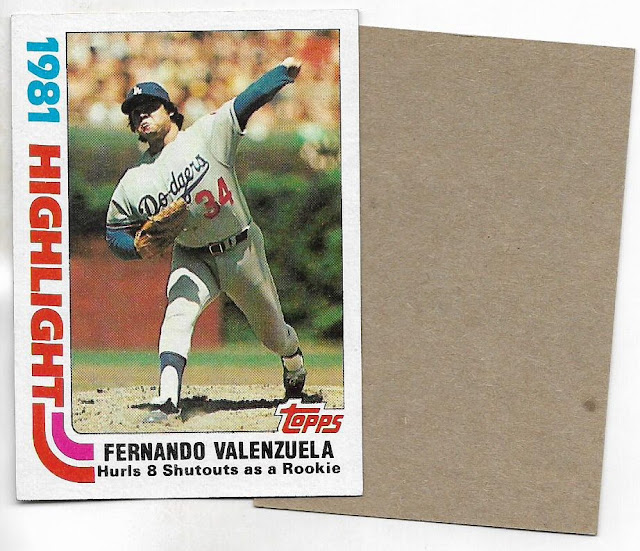 There we go. But I must admit the first image is what popped into my head first.
I thought "backless" because what the heck is "blackless"? That's not even a word!
I don't know who first started referring to those 1982 Topps variations in that way, but the nickname stuck. And now it is common knowledge and there are actually collectors -- this kind of stuff blows my mind -- that have completed the entire '82 Topps blackless variation set, which is half of the actual 792-card set. What an odd, and difficult, completion quest.
The '82 Topps variations are called "blackless" because the black ink is missing from the card. For most of the cards in the set, the easiest way to determine whether you have a blackless variation is to look for the facsimile signature (see? those fake sigs have uses!), which is printed in black. If the signature is missing, there's a good chance it's a blackless variation. The All-Star cards don't have facsimile sigs -- well, all but one anyway -- and neither do the record breaker cards. But those particular blackless cards stand out even more because the names at the bottom, printed in black, are gone from the blackless cards.
I had paid so little attention to this phenomenon over the years -- it was something I had never heard of when I was collecting the '82 set that year -- that I had never bothered to check whether I owned any blackless cards. Could it be that a blackless card was stashed in my complete '82 set?
So, finally, I investigated. I won't keep you in any suspense. I didn't find one.
I didn't find one, of course, because there's only like 100 blackless copies of each of the 396 blackless cards. That is way too few for me to bother with -- really if I couldn't find one with all the packs I bought in 1982, it's not worth chasing.
But it was fun going through my '82 Topps set and studying all the facsimile autographs. Until the arrival of 2007 Topps, it was the last Topps flagship set to contain facsimile signatures, which I've mentioned before.
And you get fun little stuff like this: 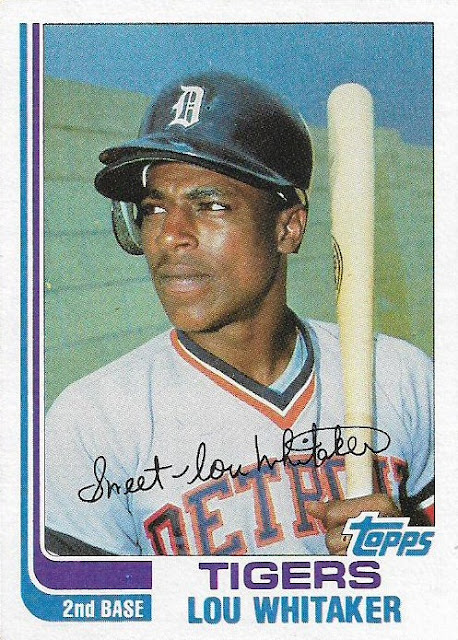 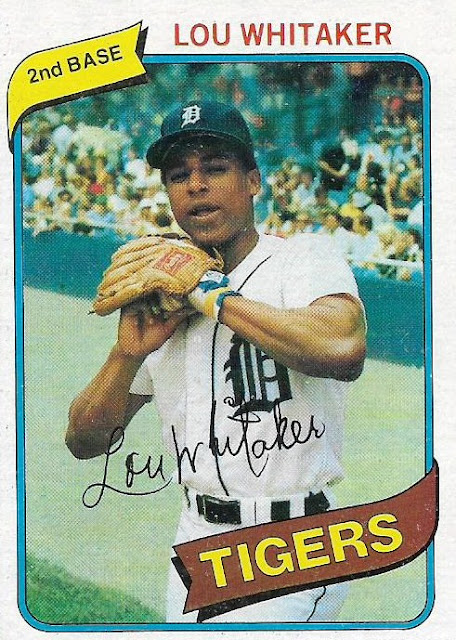 But his 1980 facsimile sig is much more formal.
There are several other examples in '82 Topps of differences between the player's name and his signature name, several of which include the player's full name -- first, middle, last -- scrawled across the card.
The '82 Topps set is also filled with sideways facsimile signatures of all kinds, but I've pointed that out already.
One of the interesting facsimile sig facts in '82 Topps is related to this George Foster card: 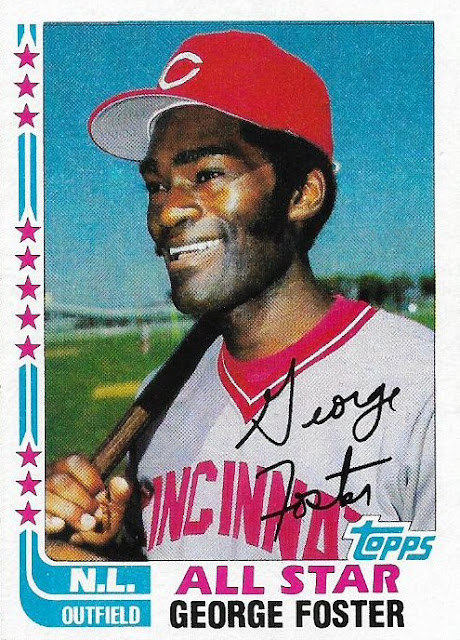 This is what I was referring to earlier. Foster's All-Star card is the only one in the set that contains a stamped signature. All of the other All-Star cards lack the facsimile sig.
The Foster All-Star card without the signature -- the corrected version -- is harder to come by. Oh, and there is a blackless version of this card without a signature, too, just to confuse the heck out of you, which underlines why I don't get involved in obsessively collecting silliness like this.
What I find more interesting is that because of the above "error," Foster has more cards with signatures in the '82 set -- flagship and Traded -- than any other player.

This way you get to compare signatures. You can tell that the signature used for Foster's Traded card with the Mets matches the "error" All-Star signature card. But it's different from Foster's base card in the flagship set.
So, that's the stuff that I observed while familiarizing myself with the '82 blackless cards.
If you want to actually see some of those blackless cards and know a bit more about the set from people much more interest in it than me, I found a forum thread with some pictures.
But my curiosity has been satisfied.

Jeff B - Wax Pack Wonders said…
I'm with you here. Along with the Donruss variations from the late 80s where there's no dot or asterisk or something. Couldn't care less.
September 29, 2020 at 8:16 PM

Jeremya1um said…
Lou Whitaker was always a little odd, and I’ve gotten his autograph 4 times over the years. The first one read Luis Whitaker. The second one was Lou Whitaker with a ribbon looking scrawl underneath. Third time was Lou Whitaker #1, and the last time was Lou R Whitaker. The different autographs on the ‘80 and ‘82 cards don’t surprise me a bit.
I feel you with the indifference to the variations and printing errors. I wouldn’t know I had any unless you told me, and I don’t feel the need to chase down any of them unless they are something like the ‘90 Donruss Harold Baines All-Star with the line through it and are easily obtainable.
September 29, 2020 at 9:08 PM

Fuji said…
A. That 82T Whitaker with Sweet Lou is pretty cool. Can't believe it has taken me almost 40 years to notice that facsimile signature.

Nick Vossbrink said…
Said it on Twitter but I'll drop it here for posterity. The idea that a printing screwup is somehow a chase card for some people relaly rubs me the wrong way. I hate it with the 1990 Frank Thomas and I hate it here. It's not an error, it's a misprint and the idea of overpaying for such a misprint is a large part of what's wrong wiht the hobby.

I'm interested in them the way I'm interested inprogressive proofs. Great for print nerds to geek out about. But as collectibles they're a hard pass.
September 30, 2020 at 1:46 AM

Mark Hoyle said…
I think I’ve got a couple of “ blackless” cards in my collection. Just to have an example. Won’t chase them though. I did search out the green tints from 62. I agree with Nick on print defects.
September 30, 2020 at 4:38 AM

Nick Vossbrink said…
Whoa. I must've been tired when I wrote that reply. So. Many. Typos.

Anyway the 1962 green tints are a very different scenario. They don't represent a printing screwup but rather a completely different print run. True variants and I understand and accept why people want different photo selections or croppings. (All that said, a lot of the cropping differences are not distinct enough for me to care, especially with the green tint run being generally poorer quality across the board.)
September 30, 2020 at 8:07 AM

CaptKirk42 said…
I usually don't bother chasing "blackless" variations because of the idea that it is just a printing error where the cards missed the black ink. I don't pursue them, but if I come across one I'll keep it I guess. I haven't even thought to check if I have that variant for the 82 Topps. I just know I don't have a full set. I have the Traded/Update set I got from Ebay a few years back w/ the Cal Ripken Jr. in the box for a deal of $75 when most people try selling just the Ripken for that or more often into three digits. True the Traded sets that are missing that card sometimes sell for a little than that but at the time I needed the Ripken as well so there you go.
September 30, 2020 at 9:39 AM