The next step in my buyback rescue mission 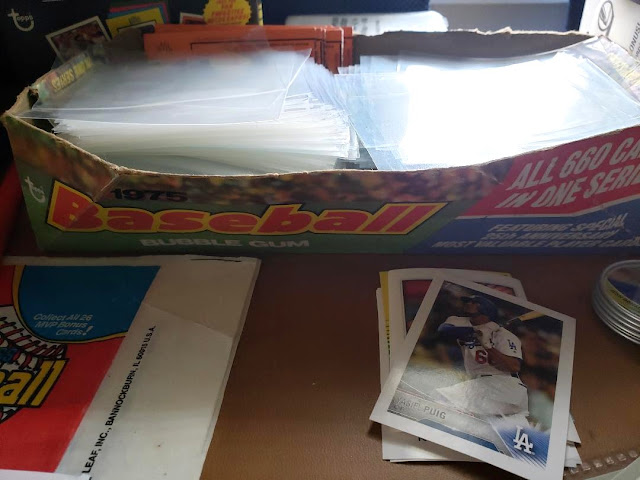 When I was putting together yesterday's Never Have I Ever" post, I started to accumulate more "nevers" then I thought I would and before things got out of hand, I ended the post. Safe to say, there's plenty in this hobby I still haven't done. And likely will never do.

But one thing I had intended to add to the "never have I evers" is contained in the photo above.

Never Have I Ever: purchased a penny sleeve.

Not one. I have stacks, as you can see, of penny sleeves at my disposal, stored in an old 1975 Topps box. There are also packaged sleeves (you can see one behind the box) that I've received as a gift. I never expect to run out and I never expect to buy any.

Also, I have never bought a team bag, top-loader, card-saver, one-touch or screw-down. I've accumulated enough over the life of this blog that my inventory should last me forever. That's what a decade-plus of blogging and trading will do. When I started this blog, I had none of these card protection devices and shudder to think how I packaged the first cards I sent to people.

The other day I ordered up a few more 1975 Topps buybacks for my completion quest. When they arrive, I will need less than 300 for a complete set.

Now, as I've written many times since I started this, I don't expect to find every card in the '75 set in stamped buyback form. There are plenty of star cards in the set that I've never seen before (Yount, Brett, Bench, Rose, Jackson, etc., although Shoebox Legends is still holding on to my Nolan Ryan '75 buyback!). And even if  they do exist, they probably will go for prices I don't want to pay.

I still haven't gotten to the point of facing that brick wall. Still plenty of buybacks to get.

But I am getting closer to considering what to do when all the possible stamped buybacks are gone.

When that happens, I will likely have to try to purchase 1975 Topps autograph buybacks to obtain certain cards and continue the quest.

I didn't expect to be taking that step quite yet but as usual, someone else got me started early. 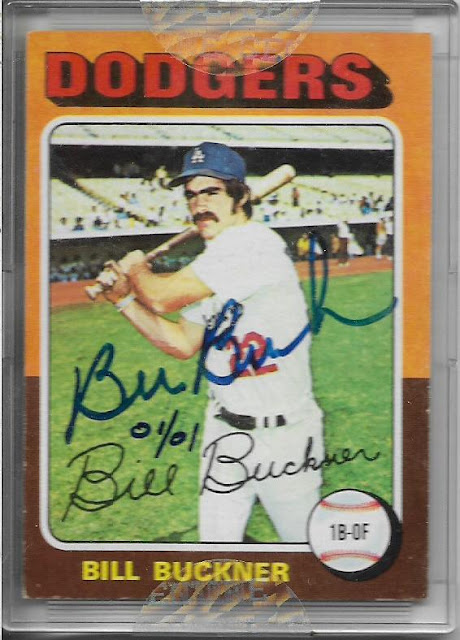 I received this surprise card from Greg (@grogg for Twitter folk). He thought it would be perfect for my collection. And it is. 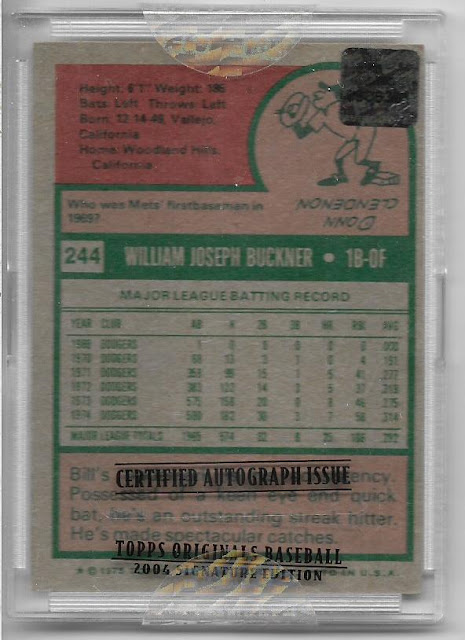 But this card does answer what I'm going to do about obtaining card No. 244 in my buyback quest. I had not seen a stamped Buckner buyback so far.

I'm not sure what to do about storing it with my other buybacks. The lack of a stamp isn't a problem for me logically although my brain has a bit of an issue. There's also the question of whether or not to break it out of its case to include it with the stamped buybacks.

But I have lots of time to consider stuff like this. I'm pretty sure this won't be my only encased, stamped '75 buyback.

This card feels less like a rescue mission than the other '75 buybacks in my collection. The intent behind this collection quest is providing meaning for these cards again -- cards from the first set I ever bought -- as they sit unwanted on online selling sites because someone slapped a stamp on them (believe me, I've seen some those same '75 buybacks rotting on the COMC vine for three years now).

And that's why I will continue until I can't continue anymore, whether the cards are stamped or signed. Just as long as they're from 1975 Topps and they're a buyback.

Brett Alan said…
That "Certified Autograph Issue" stamp is on the packaging, not the card, correct? If so I'd have to advocate for keeping the package intact.

I haven't technically bought a penny sleeve, but I go to game conventions, and I sometimes win dealer dollars to spend in the dealers room. (Similar to getting money to spend at a card show as a door prize, but won because I won a game.) I love games, but I don't have much of anyone to play with away from the cons, so I already have a bunch of good games sitting unplayed. So if someone has penny sleeves (or, better yet, card boxes) and I've got "money" to spend, I will grab some. I may never need those either, but at least I've got the option. (Pretty much the only card supplies I've bought with real money are pages and binders, but I may have to buy a box or two.)
February 12, 2020 at 8:02 PM

Nick said…
I mentioned it in a post I wrote a couple weeks ago, but I've also never bought any kind of card supplies. I get so many from card shows (a large part of my post-show routine is taking everything out of penny sleeves/toploaders) and hardly ever use them myself, so I've got enough for several lifetimes.
February 12, 2020 at 8:19 PM

GCA said…
I've taken whole boxes of old top loaders to my local shop, especially when he first got started. Got a bit of store credit. The ones with stickers or marks on them get used for shipping.

I also just bought a binder full of cheap football cards from another dealer on the condition that I bring back the pages and binder later. (I'll probably give him some of the D-ring binders I get free from work)

Haven't bought penny sleeves, but I do try to sort out the scummy ones from the clear ones. I have bought a few screwdowns even though I have old ones in a drawer because those are scuffed up. That stuff is used for mailing.
February 13, 2020 at 9:14 AM

Fuji said…
Never bought penny sleeves, team bags, top-loaders, card savers, or screw downs? That's impressive. I've purchased at least 2 cases (10k per case) of penny sleeves since I returned to the hobby in 2008. I wish I could recycle the supplies for personal use, but my OCD prevents me from doing that. Instead, I end up using the "used" supplies for trade bait and stuff I plan on eventually selling/giving away. And the supplies that are just too grimy end up getting tossed.

And congratulations on landing the Buckner buyback for your set! This should prove to be an entertaining project for many years to come.
February 14, 2020 at 8:19 AM