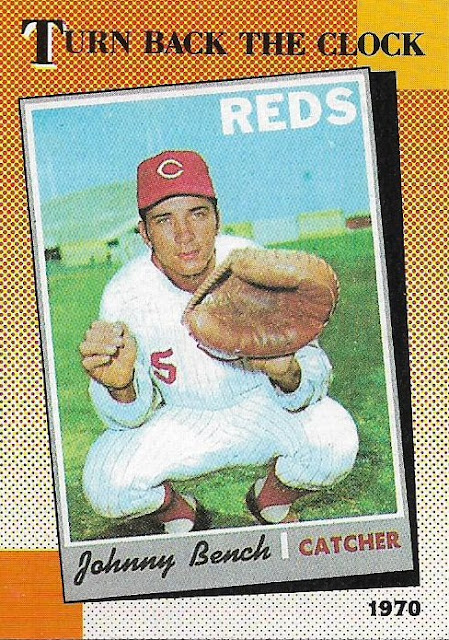 I've heard a little bit of preseason speculation that the Reds could be the team to beat in the NL Central this year.

Given the Reds' perpetual fifth-place finishes the last several years, that seems like very optimistic speculating. But I can see it a little. The Reds have been active in the offseason and nobody knows exactly how good the Cardinals and Brewers will be. The Cubs seem to be declining and the Pirates determined to fight the Marlins, Tigers and Orioles for the worst, smelliest team of 2020.

It would be the perfect time for the Reds to compete. If you haven't noticed, the Reds seem to do particularly well when a year ends in zero.

The Reds also finished first in the NL Central in 2010.

Topps, of course, should be paying tribute to that 1990 season with inserts that replicate the 1990 design. But since Topps is now obsessed with 35th anniversaries and also seems to be avoiding less popular designs like 1988 and 1990 (for the record, I do not think 1988 is unpopular, it is one of my all-time favorite designs), I'm going to have to properly acknowledge the 1990 anniversary here.

So let's see the team that shocked the Big Bad Bash-Brother A's in the 1990 World Series: 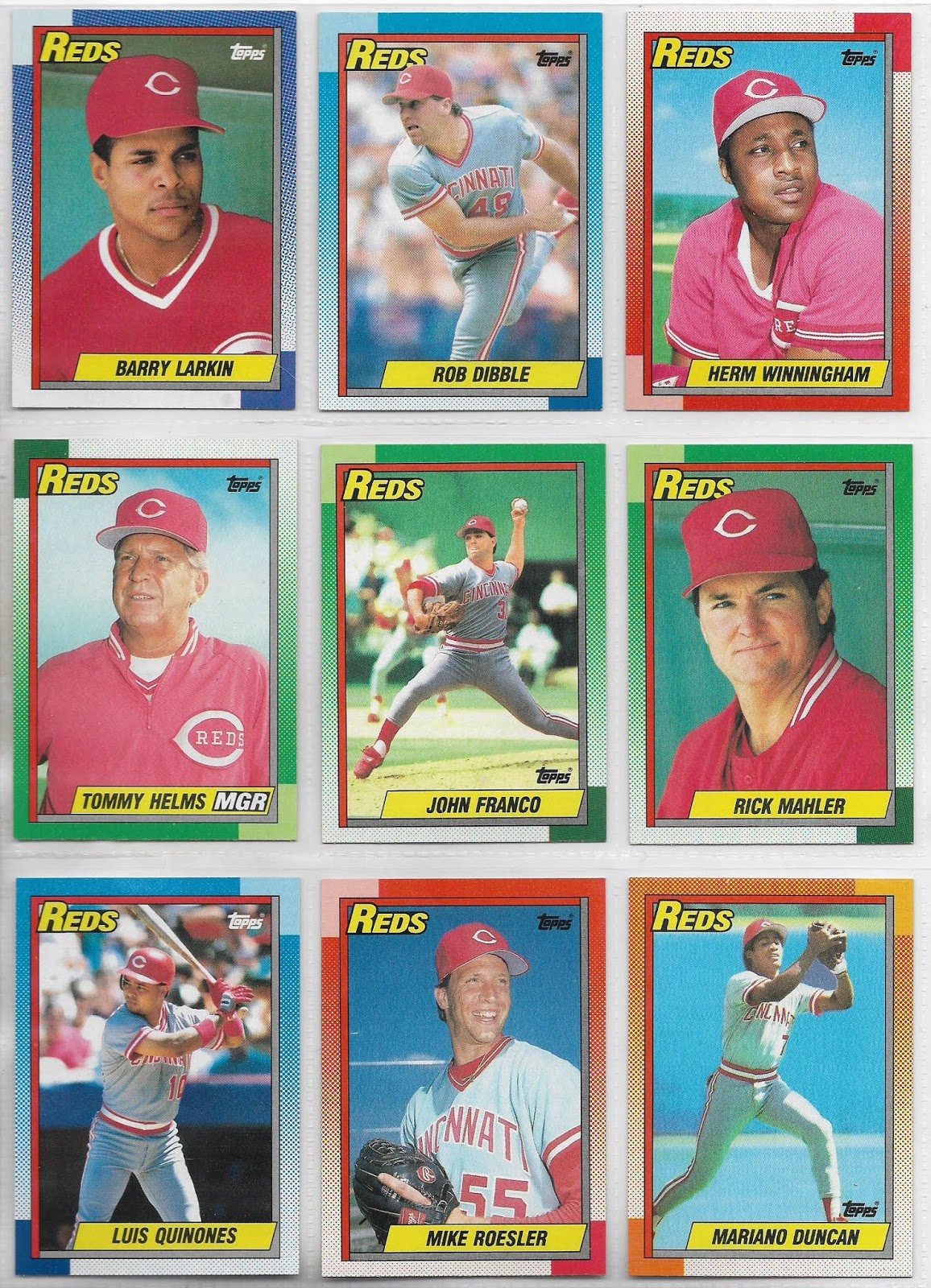 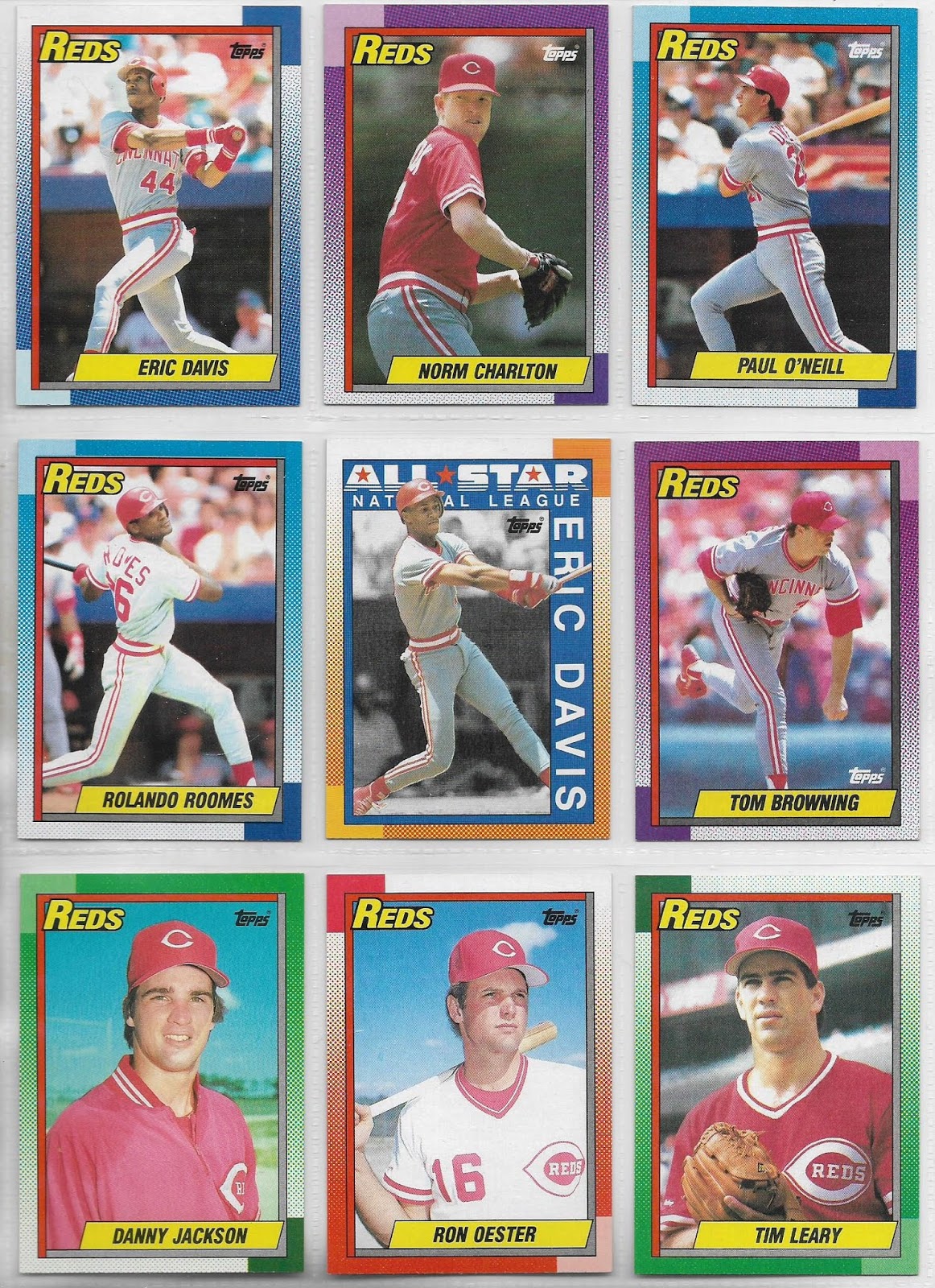 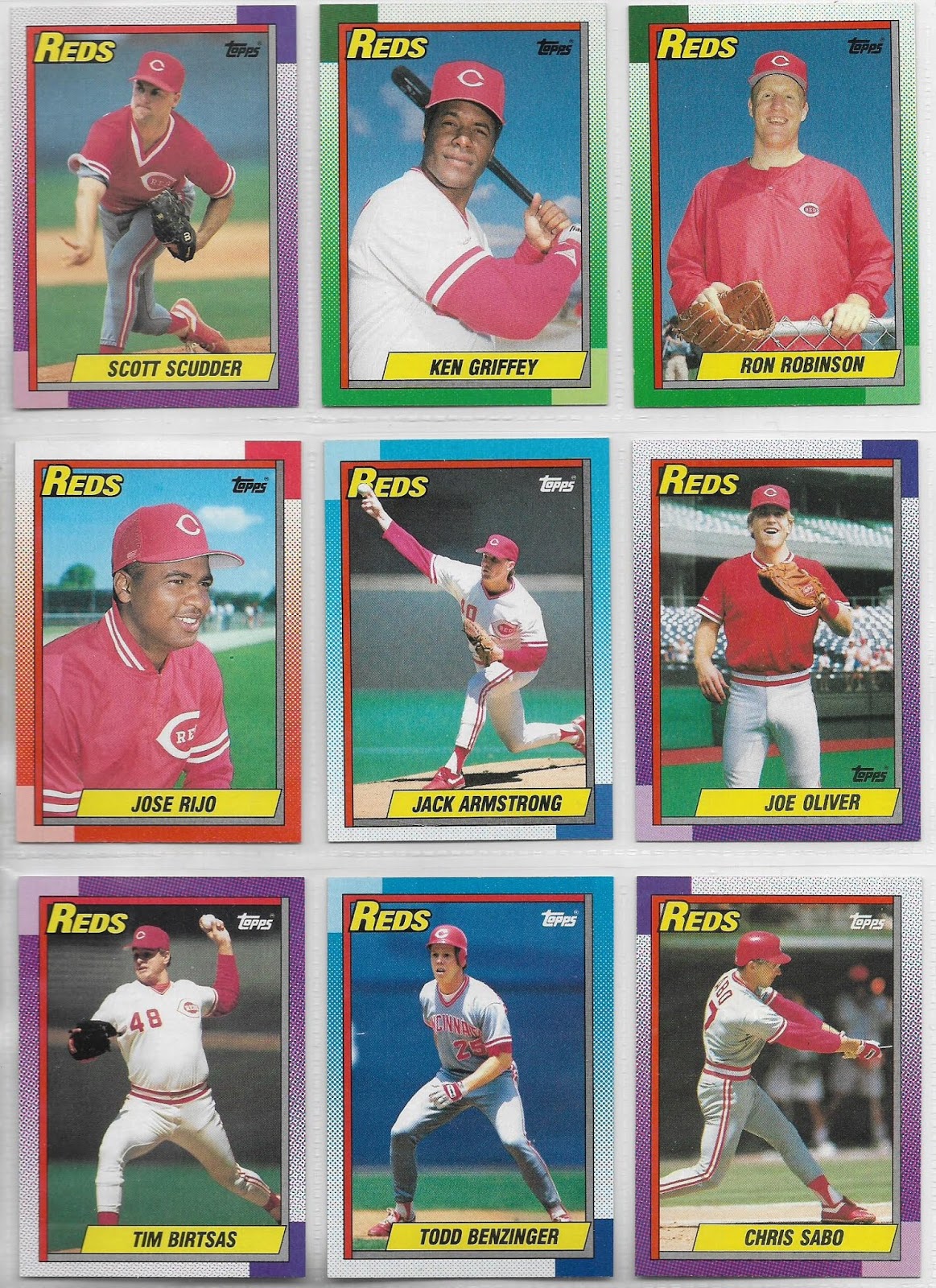 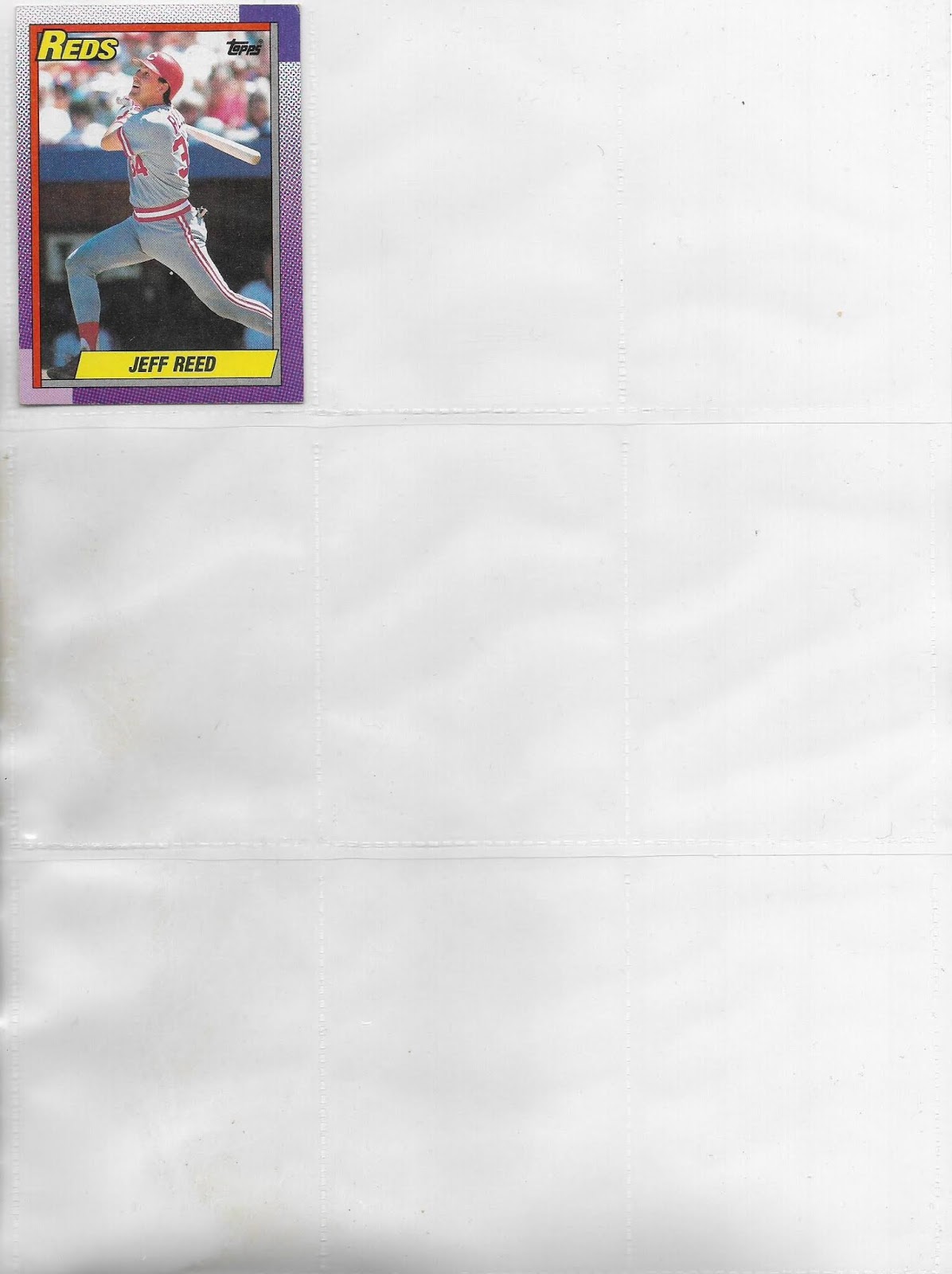 Seeing the design separated by team makes me realize for the first time that the design DID reflect the team that was being pictured. My attention has been drawn toward the wild borders that seem to be selected at whim. However, the rest of the design is the same for all of the Reds cards. The Reds team name and player name box are all yellow. The inner photo border is half red and half gray.

I've never done an analysis of the 1990 design but I might have to someday.

OK, time for the Joy of a Team Set rundown:

Honestly not a lot to choose from here. 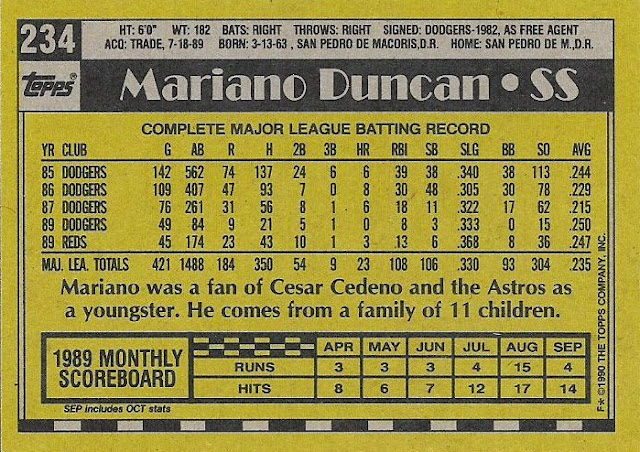 I was a fan of Cesar Cedeno, too!

Team's claim to fame: Beating the heavily favored A's in the World Series. Oakland was favored to win the Series each year from 1988 to 1990, I believe, and managed to win just one in 1989.

Players I've talked to: None. My newspaper has interviewed Tom Browning in the past because he spent his junior and senior high school years in the area, but I didn't do any of the interviews.

Remembrance of the Reds that season:

1990 was the year that I moved to a new area -- somewhere I had never been before -- to take a job. I am now marking my 30th anniversary at that business, which is one of the reasons why 1990 has been on my mind of late.

Because I was trying to get adjusted to a new job, in a very foreign (and pretty strange) area, with a demanding boss, I didn't have a lot of time to focus on baseball that year. I barely bought any baseball cards. In fact I don't remember buying any. I only recall my co-worker buying some 1990 Topps and me reacting to the design with semi-disgust.

When the playoffs rolled around in October of that year, I watched them on a small black-and-white TV in my apartment, by myself. Nobody else -- the few people I knew in the area at the time -- cared about the Reds and the A's.

The portable TV sat on a low, maybe two foot high, rolling cart. To properly watch TV, I had to sit on the floor. And that's how I remember the World Series that year, on 12-inch screen, entirely in black and white, watching Jose Rijo, Billy Hatcher, Barry Larkin and The Nasty Boys on the floor, with food and drink propped up on a foot stool that was a Christmas present when I was like 12.

The 1990 Topps Reds team left out several notables from that World Series. They showed up in the Traded set later that year: 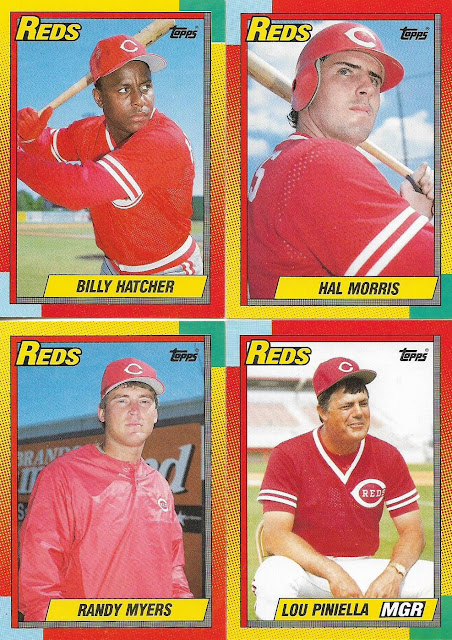 It's pretty difficult to believe that was 30 whole years ago. 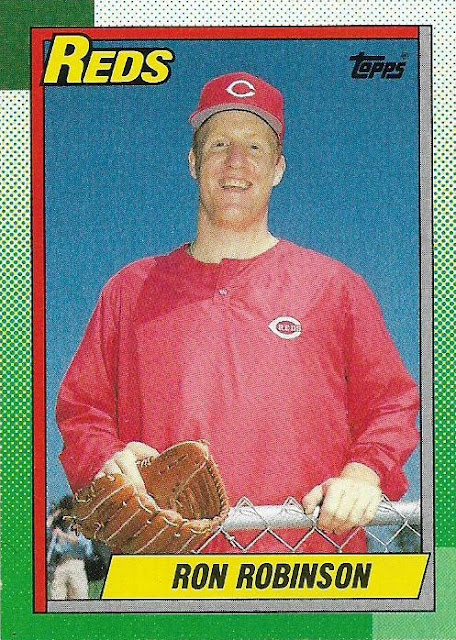 Spring training games are a few short days away.

Thanks for joining me in Joy of a Team Set.

Jeremya1um said…
You totally nailed it by saying how the borders match the teams. I never realized it until I started making templates for customs from the set.
I think the Reds have a decent shot and are probably one of the most improved teams in baseball. I hope you are wrong about my Tigers, but maybe they can tank it and get the #1 pick in 2021, sign a nice free agent starting pitcher and HR hitter, and contend in 2022 or so.
February 18, 2020 at 8:11 PM

Sean said…
I have fond memories of that set, I was 14 at the time and actually liked the colorful border design at the time (way better than the Donruss Red set that year).

I do agree that the 1988 Topps set is one of the all time greats in terms of design, its always been a favorite of mine. Not sure why anybody would have anything against it.
February 18, 2020 at 8:46 PM

BaseSetCalling said…
Green on Red was still touring in 1990. Maybe Topps was a fan.


I think the surprise team in the NL Central will be the Pirates but only in so much as they could show signs of developing a new core of good young positional players, not that they will make standings waves.
February 18, 2020 at 11:44 PM

steelehere said…
I'm sure the omission was accidental since you have the back of the card shown in the post but Mariano Duncan was also a former/future Dodger.
February 19, 2020 at 12:36 AM

night owl said…
Re: all the comments correcting my post. This is what happens when you post after five hours of driving and little sleep.
February 19, 2020 at 3:10 AM

Jamie Meyers said…
1990 Topps is the set that was out when I started collecting again so those cards are indelibly stamped in my mind. Players I've met - Rob Dibble, Joe Oliver and Billy Hatcher. Hatcher was nice. Oliver was moody but usually pretty nice. Dibble was much more friendly than I expected.
February 19, 2020 at 4:53 AM

Fuji said…
Outside of the Topps design, the Reds beating the A's, and my first real girlfriend leaving me to go to UC Irvine... 1990 was a pretty great year for me. I graduated high school, started college, and was living the dream working part time at my LCS.
February 19, 2020 at 10:23 AM

Peter K Steinberg said…
Fun post. Thank you for doing this. I don't mind this set at all though I think it's being so different from 1989 was a little jarring & might've taken some getting used to. Happy anniversary to you!
February 19, 2020 at 7:09 PM