Comments from the peanut gallery 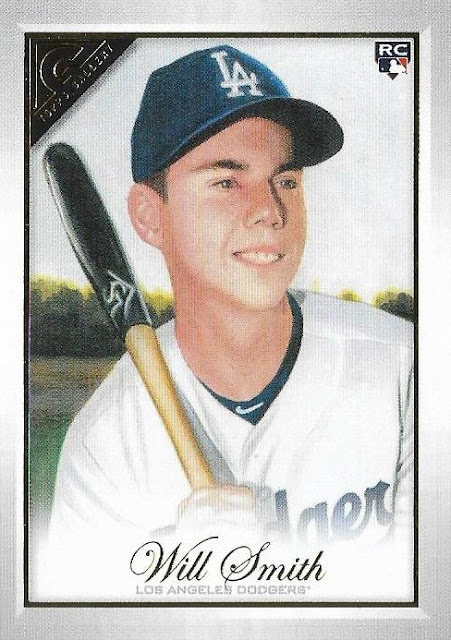 As someone who works in a creative field and thinks creative thoughts, I've always respected not only painters and drawers but musicians, comics, writers -- of course -- and anyone who creates something and then, probably against their best interests, presents it to the world.

These are my people. And they get far too much criticism when compared with other career pursuits.

That said, I don't like the Topps' Gallery reboot.

It's taken me three years to settle definitively on an opinion of this set. But I'm sure now. Gallery is not appealing.

Part of the reason is art sets are much too inconsistent for me to collect. I am always willing to give a baseball card art set a chance -- because I like those creative types -- but as soon as I see likenesses that don't work or images that are vastly different from each other, I'm done.

Sometimes I'll even critique the card, point out that the picture doesn't look like the player AT ALL, and that's not anything I want to do. Sure it's fun for a snarky blog post, but artists get far too much judgment. They don't need that from me.

So I'll avoid the set, even though I feel a little bad for the artist or artists because they're probably being paid a commission for the paintings until Topps sees the cards don't sell and then it's goodbye artist, goodbye paycheck.

But collecting and consumerism is a ruthless business. I refuse to collect what I don't like.

And, besides, Gallery has another problem besides consistency.

This is an example of a 2019 Gallery base card: 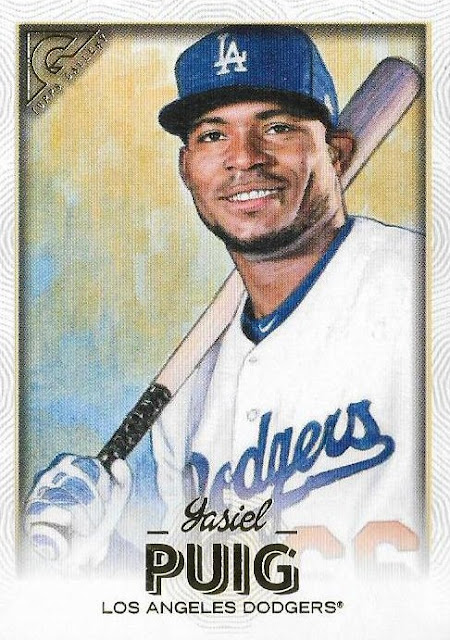 This is an example of a 2017 Gallery base card: 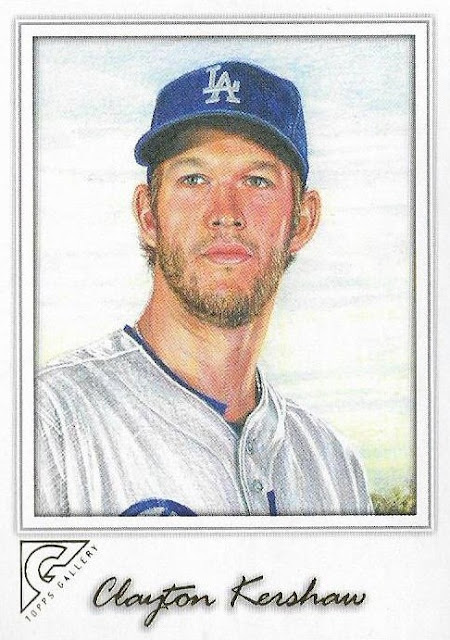 That is three way-too-similar designs. I'm already confusing which cards go with which years and this is only the third year of the reboot.

That is my main problem with this set. Why would you make a set three different years and make the cards look almost exactly alike?

People complain about this with Allen & Ginter but the differences in A&G from year to year are much more definable than what's going on with Gallery.

And the thing is, this never was a problem with Gallery during its first go-round.

Current Gallery is a revitalization of the card brand that ran from 1996-2003. A couple years ago, Topps decided to revive a bunch of brands from the late 1990s, stuff like Gallery and Gold Label and Tek.

None of this evokes any nostalgies with me, I wasn't collecting then. A bunch of people weren't. But I guess Topps saw some cash in it and unearthed the brands.

Gallery though has taken only one of the card looks from the original Gallery and repeated it over and over. 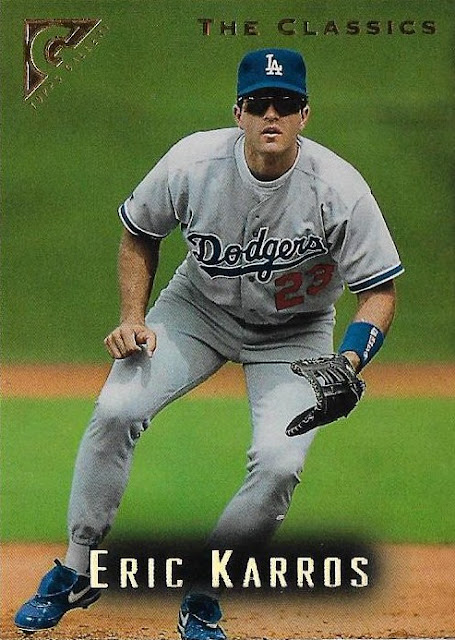 1996 Gallery.  There were no paintings with the first Gallery set, at least not with the base cards. Instead, the "artistic" part of the set was in the various themes of the card looks -- the classics, the expressionists, the modernists, etc. Kind of a weird take for a set, but that was the late '90s for ya. 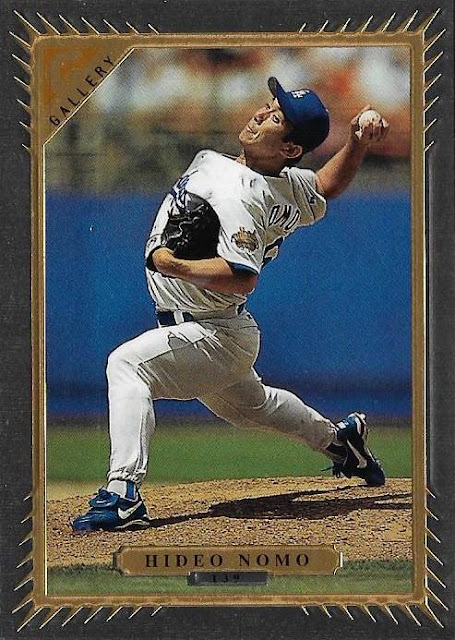 1997 Gallery. Vastly different look as the artistic reference was each photo was presented in various frames, like a framed picture on a wall. 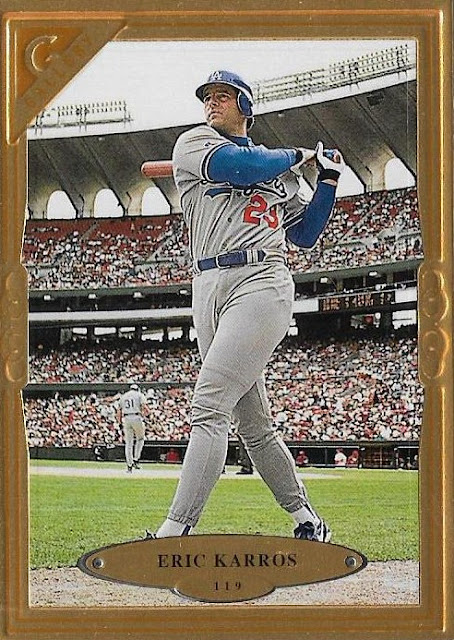 The card frames differed. Imagine that.

The best part of '90s Gallery, though, were the inserts, which is something you can say about every set from the late '90s. 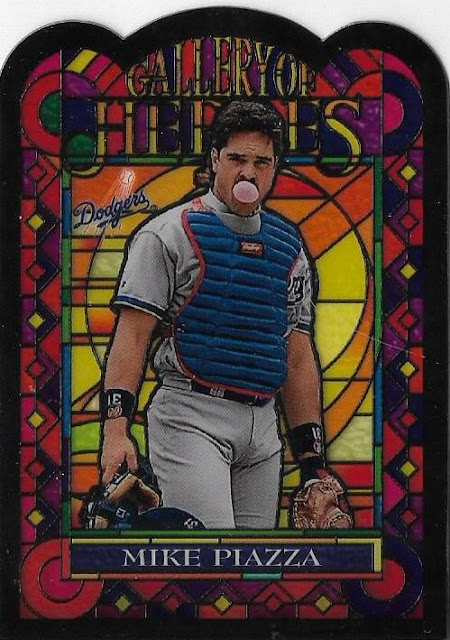 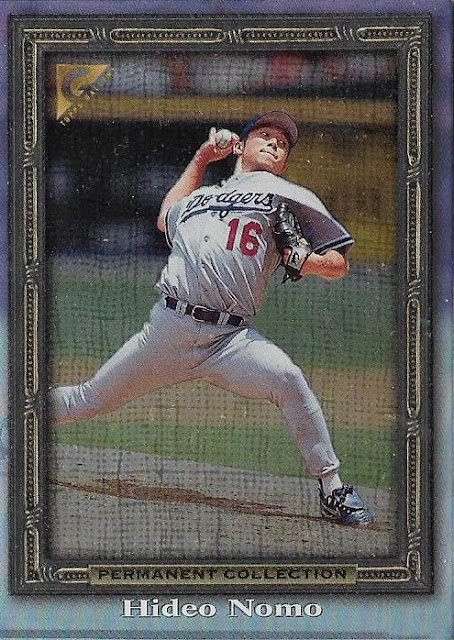 1998 Gallery. More framed photos printed on canvas-like card stock. Gets a big "whatever" from me, but at least it looks different from 1997. 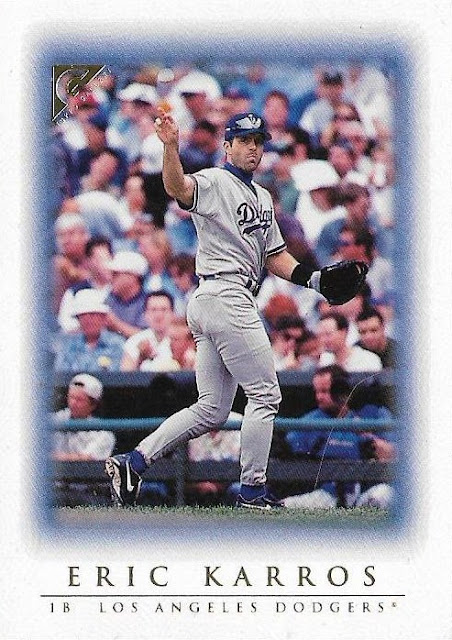 1999 Gallery. This where we see a design that resembles what Gallery looks like now. Still just photos, though. This is actually probably my favorite Gallery look. But I don't need it repeated year after year. It also doesn't have much to do with paintings or a gallery. 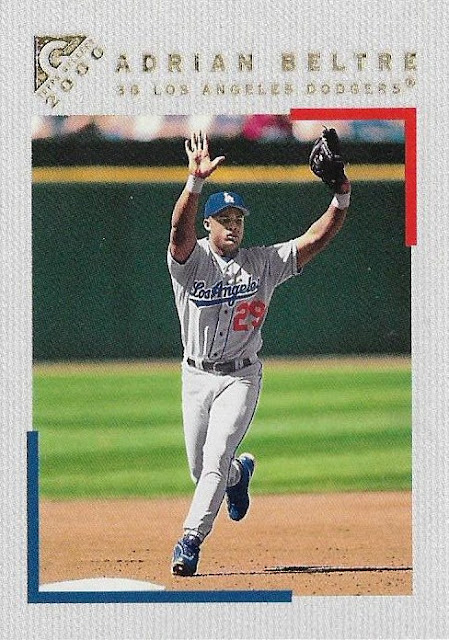 2000 Gallery. Still with photos. It adds some color on the borders, which is something current Gallery could use. Enough with the gold.

There were some paintings with the inserts in this set, which paved the way for the following year and what we know as Gallery today. 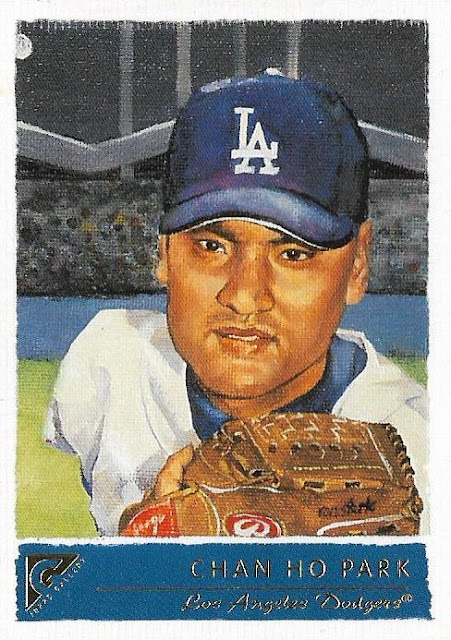 2001 Gallery. Topps went full-artist mode for this set. The base cards were painted by artists and each artist was mentioned on the back of each card.

I can appreciate these. It's a whole new look, both in design and concept. But, again, you have to be prepared for wildly different images of your favorite players. 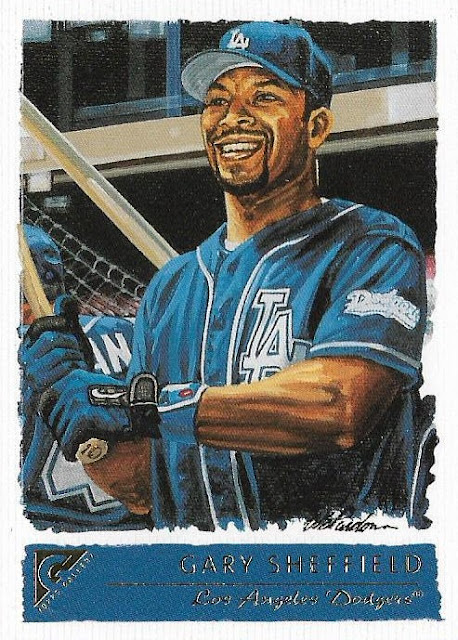 That is somewhat Gary Sheffield, I guess.

(This doesn't mean I'm criticizing the artist. It's very difficult to paint player likenesses to the specifications of collectors who want photo-quality likenesses). 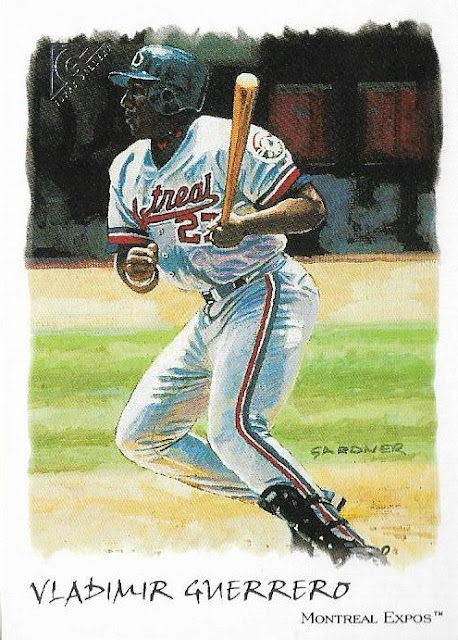 2002 Gallery. This is the only set for which I have cards of players from other teams. That's because I bought a few packs in a bargain bin at card shop several years ago. I don't mind these cards. Many of the paintings show the players in action and the viewer can be more forgiving if the player is shown farther away and not in a portrait format. 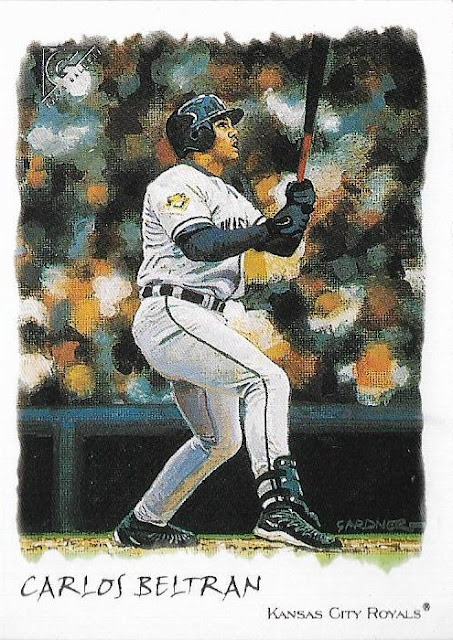 I probably should get rid of this thing though. 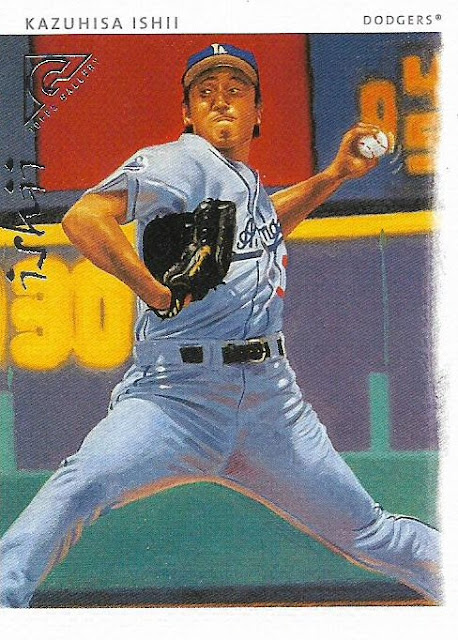 2003 Gallery. The final year of the initial run of Gallery is bold and quite colorful. Lots of legends are included with this set and I like the canvas feel of these cards.

But that was it for Gallery until 14 years later. 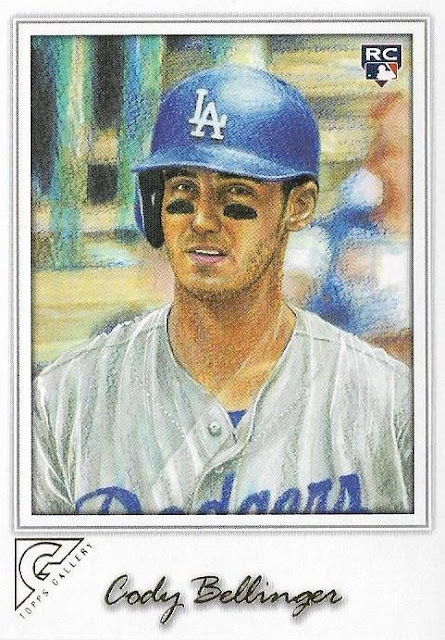 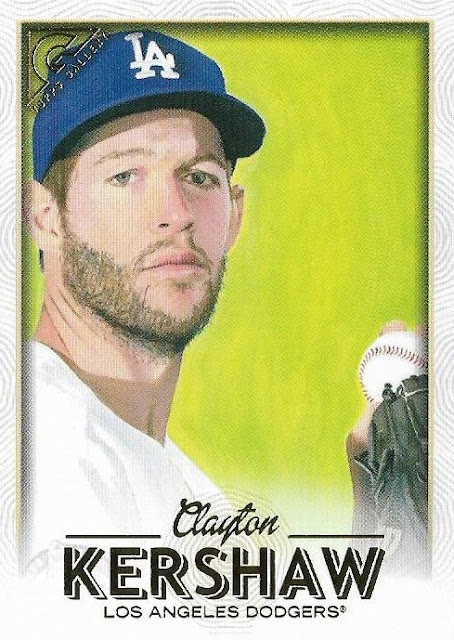 Now, we've got hum drum sameness, portrait after portrait, which may or may not look like the player.

My daughter works in an art gallery. Every few months or so, the displays are rotated out. A new artist's work comes in and replaces the old artist's work.

I think that maybe Gallery should think about doing that. Mix it up!

But, listen, I don't really care.

Gallery is a Walmart exclusive and I certainly am happy that there's a set that doesn't appeal to me sitting only on Walmart shelves. That means I don't have to go to Walmart.

These are just my two cents.

Comments from the peanut gallery.

Nick Vossbrink said…
I wish Gallery was actually about the artist. Pick a photographer, painter, collagist, whatever and have them do an entire set. Vary it up each year with wildly different types of art instead of having something that looks like you hit a photo with a Thomas Kinkade photoshop action.
January 21, 2020 at 7:37 PM

BaseSetCalling said…
I think each collector will respond to each artist differently. I really like one of this year's artists and will complete the set of the cards they created. I felt the same about National Chicle - only wanted cards from certain of the contracted artists, not all of them.

I think you might like the 2019 Kershaw card when you get one. A nice, fine portrait by Josh Trout, the artist I like best. I haven't cared much for his previous 2 cards in this.

Recently I discovered that a large portion of the 2017 set was drawn by Mayumi Seto, who went on to become the artist-in-residence for the Topps Living Set. I have no chance to ever afford to collect that one, but I like her work. Some cheap 2017 Gallery is probably more realistically obtainable for me.

I would also note that these cards really have to be decided on in-hand - they never appeal to me on-screen. But ripping a few packs, I quite like them more.

Unknown said…
I always thought that at some point, Topps Gallery and Panini Diamond Kings swapped concepts, and are now just doing each other's bits [Gallery doing DK's elegant, homogenized portraits, DK doing Gallery's stylized action shots]. And next to no one has noticed.
January 21, 2020 at 10:08 PM

Brett Alan said…
That Piazza...bubble gum and stained glass is just such a bizarre mix! I've definitely noticed that my Piazza collection (even though I don't have that one) is very heavy on the inserts...very few actual base cards, for the most part.
January 22, 2020 at 4:58 AM

Fuji said…
I enjoyed Gallery back in the 90's... and even though I was leaving the hobby at the time... the 2001 design is my favorite from their original run. Personally I wish Topps would stop cramming products down our throats. I don't have an issue with Gallery, but like you pointed out it's been pretty much the same thing the past three years. If they put Gallery on a rotation and released it once every five or six years... I'd be more likely to try and build (or just buy) the set. The same can be said for products like Tek, Gold Label, Finest, etc. But that's just my 2¢.
January 22, 2020 at 11:44 PM