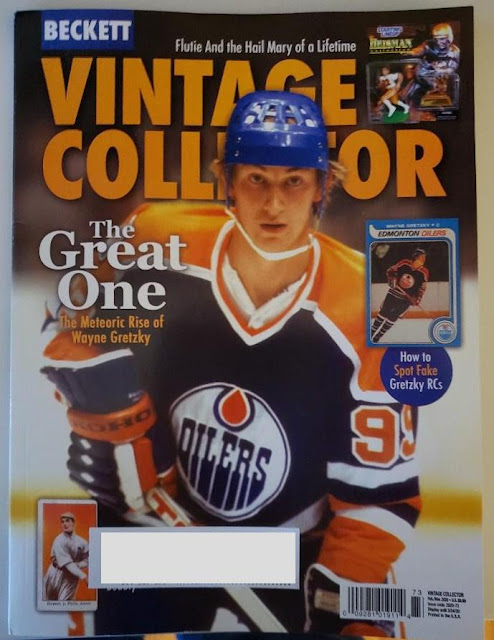 The February/March edition of Beckett Vintage Collector should have arrived in subscribers' mailboxes by now and may or may not have reached magazine aisles at your favorite chain bookstore or supermarket (I don't know for sure because it takes me an hour to drive to somewhere with a magazine aisle).

Inside that Vintage Collector is another article from me. It's my sixth one now. To think, at this time last year, I was celebrating my first. 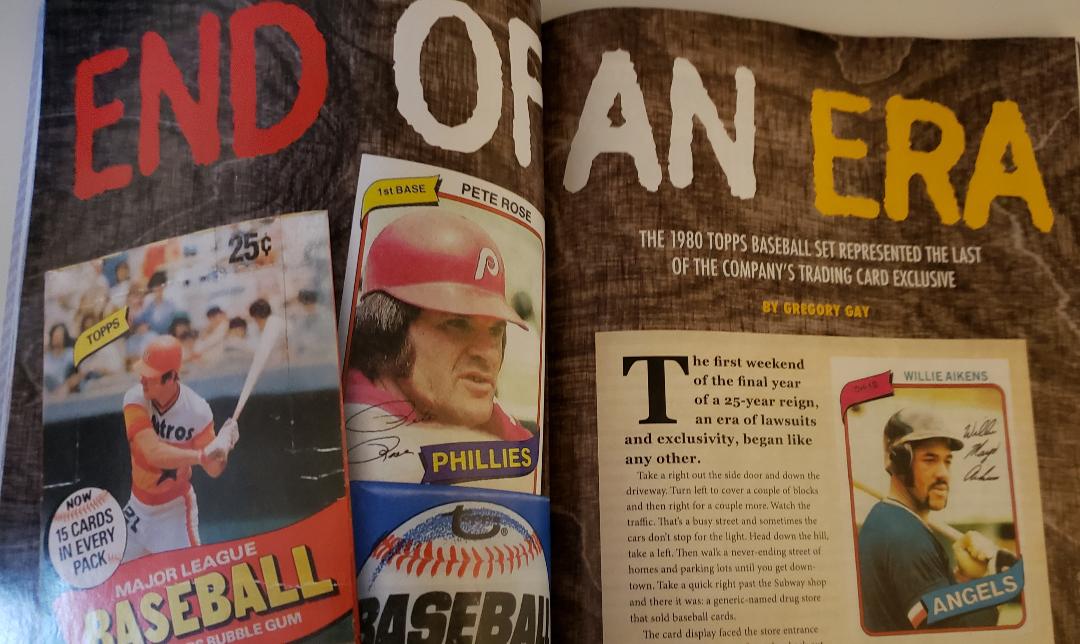 The article is about the 1980 Topps set, which was the final Topps flagship set issued during the Topps monopoly era. That was exactly 40 years ago, before the arrival of Donruss and Fleer the following year.

Many collectors who didn't arrive upon the hobby scene until later in the 1980s or the 1990s seem to regard the monopoly era as a strange and unpleasant place. With abundant card options at their disposal for 40 years now, how could anyone live on just one card set a year?

It honestly wasn't that bad. It was pretty fun actually. I thought I'd fill everybody in on the scene that year. And that's what the article is about: us "unfortunate" collectors and the 1980 Topps set.

I wrote so much about the 1980 Topps set -- the Rickey Henderson rookie, the blue backs, it's all in there -- that I don't think I have anything else to say about it.

But when one of my magazine articles hits the streets, I like to address it on the blog with something that you can't find in the article, a little something extra for my blog readers. But what would that be? I didn't have anything left.

Well, I had a little small something. It's so small that a lot of collectors won't even care, and that's why it wasn't in the article. You would have to collect the set or at least collect a 1980 team set to notice it.

Here, tell me what's different about this card: 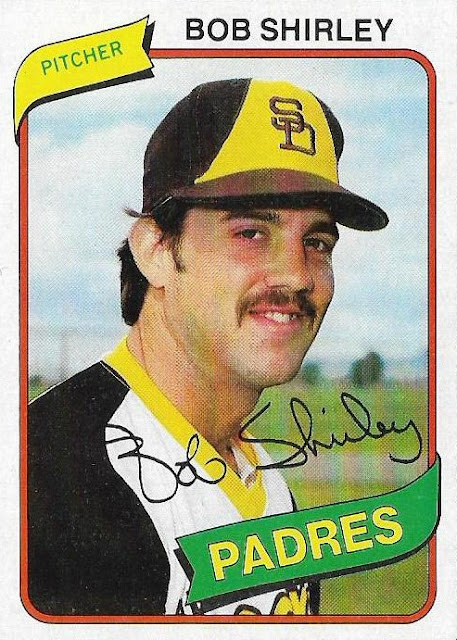 How about this card?: 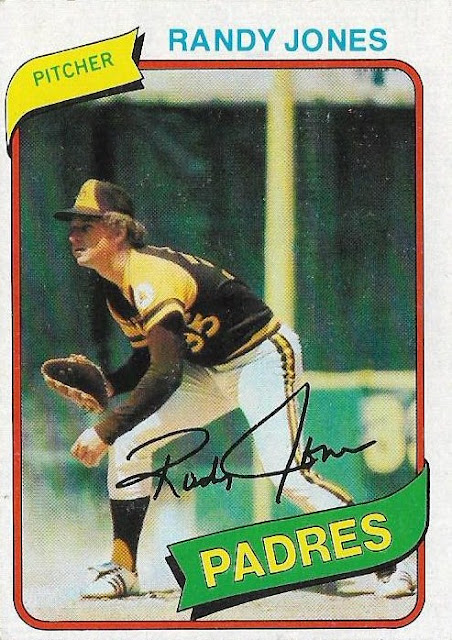 It has the same difference as the Shirley card.

I suppose that doesn't make it so different -- at least not different from the Shirley card. But it IS different. 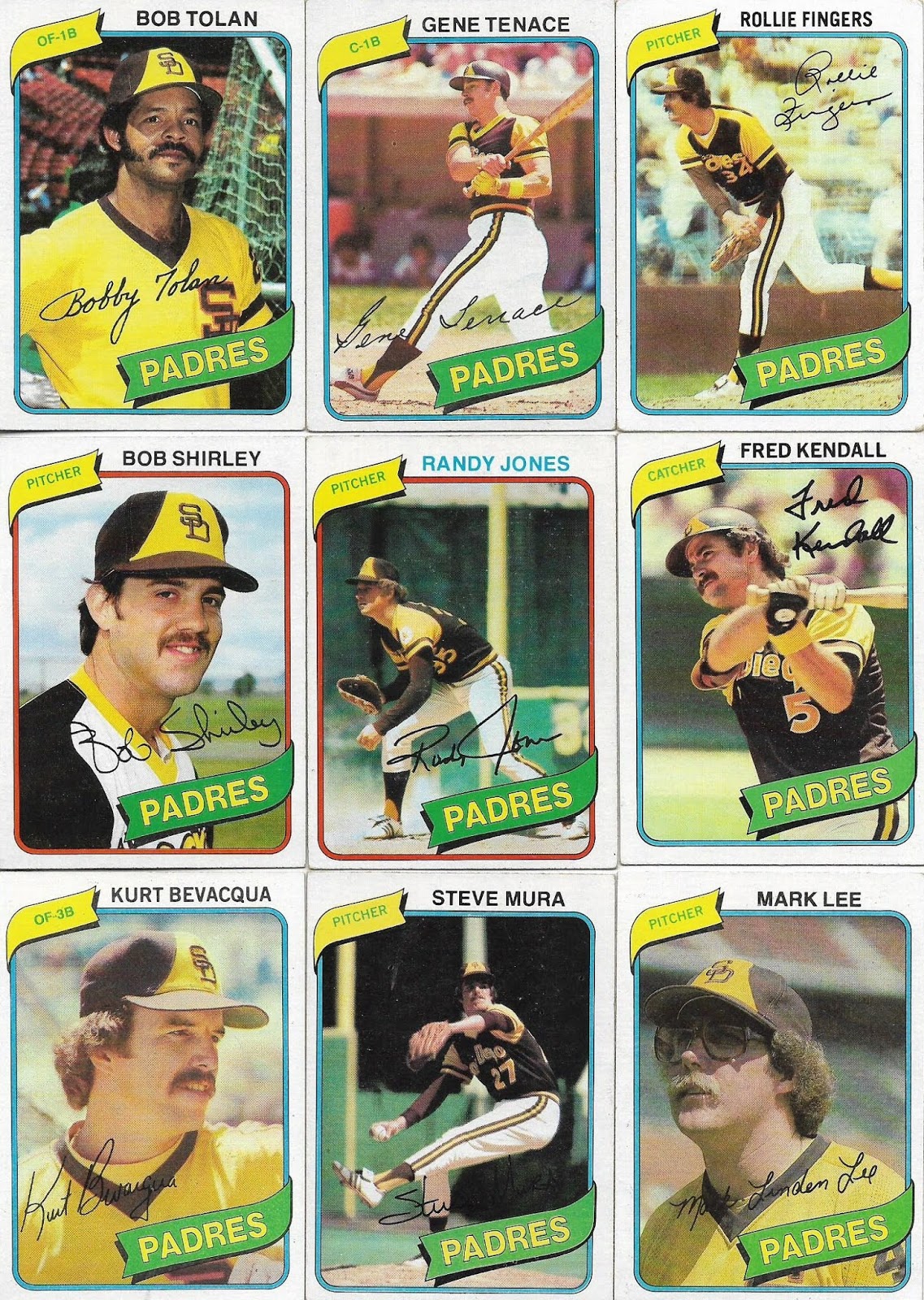 That is how different.

The Bob Shirley and Randy Jones cards are the only cards in the 1980 Topps Padres team set to border the photo in red rather than blue.

This was striking to me at the time.

With the exception of sets like 1975 and 1990 Topps, flagship sets, especially from this time, used a particular color scheme in the design for each team. That color scheme probably didn't match up with the team colors at all -- which is possibly why the red-border issue came about -- but as a collector you quickly memorized the different color schemes as you opened packs and it made sense.

Until you came to something like a red border when it was supposed to be a blue border.

The interesting thing about the 1980 Topps Padres border difference is that it was two cards instead of one stray card. 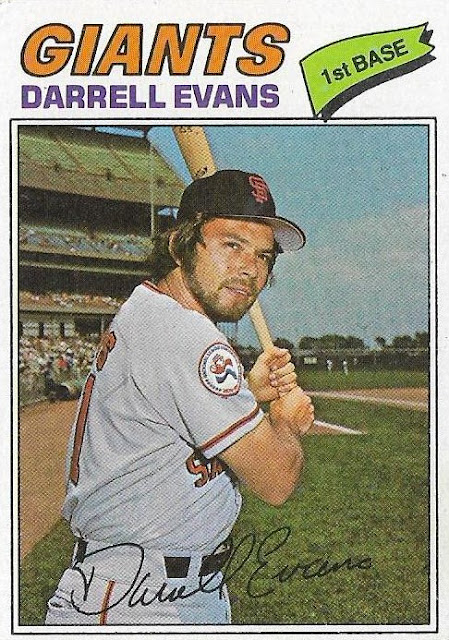 This is a well-known example of the one stray card.

There are lots of examples of variations in player name or team name colors in Topps' sets. All you have to do is go through the 1968 or 1969 checklists. But this was my first experience with the phenomenon and, wow, it really stood out. 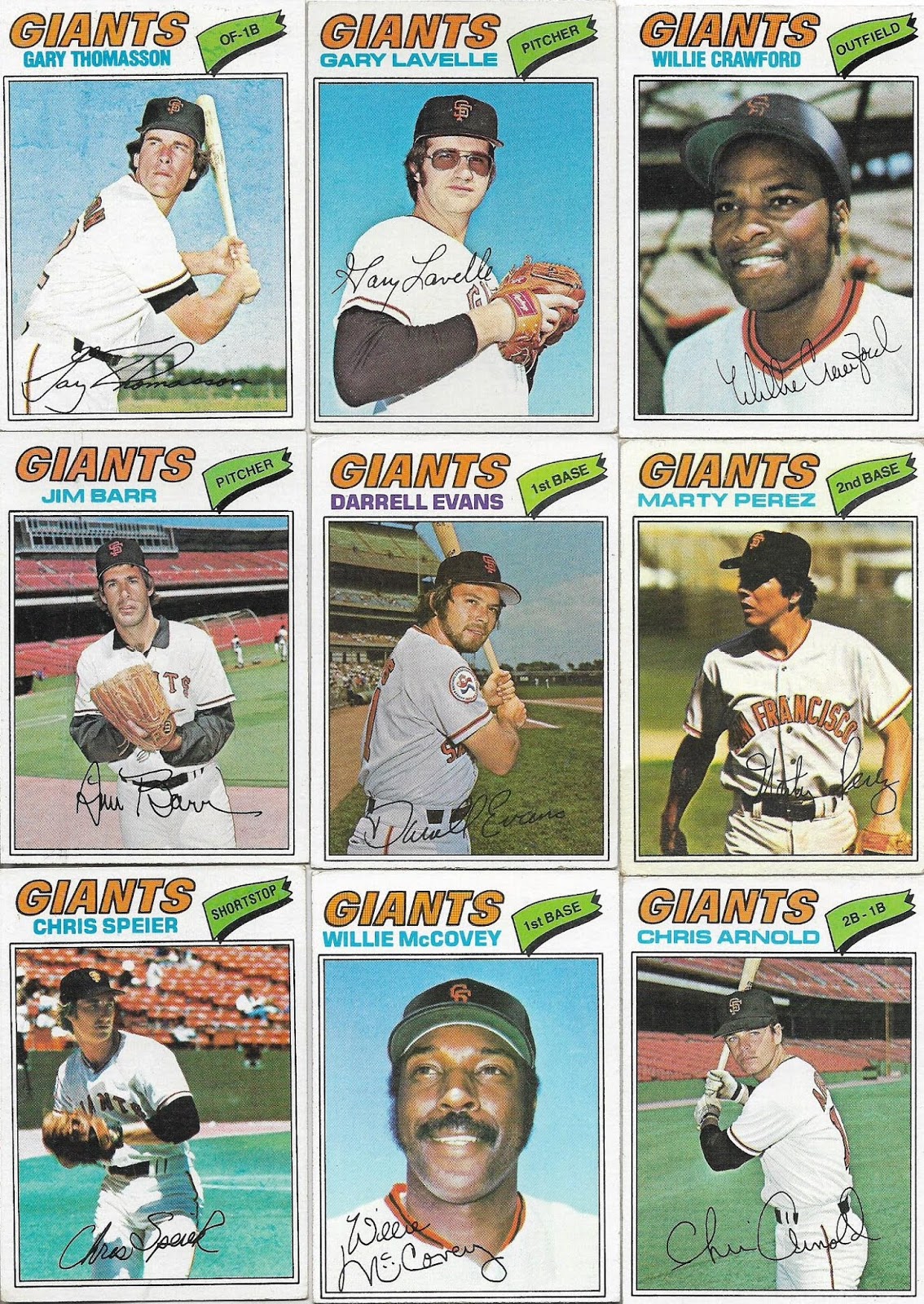 Darrell Evans is the only name in purple amid Giants teammates with their names in blue (love that McCovey signature).

There must be tons of examples of this beyond the 1977 Evans example or the 1968 or 1969 white/yellow examples. I just looked up one team set at random -- the 1993 Topps Angels -- and found that Gary Gaetti's card shows his player name in white letters while all of his other Angels teammates have their player names in red letters.

I would love to compile more examples of this, but who knows if I will ever have the time.

I just know that I was happy -- speaking of the Angels -- when a similar thing happened 10 years ago with a Topps set. It was so significant that it was on the level of the 1980 Padres examples. 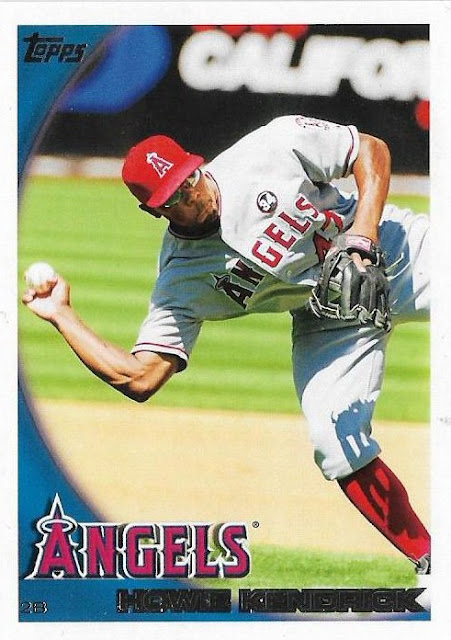 It involved World Series champion Howie Kendrick and his 2010 Topps card. I noticed the difference right away as did lots of collectors at the time. 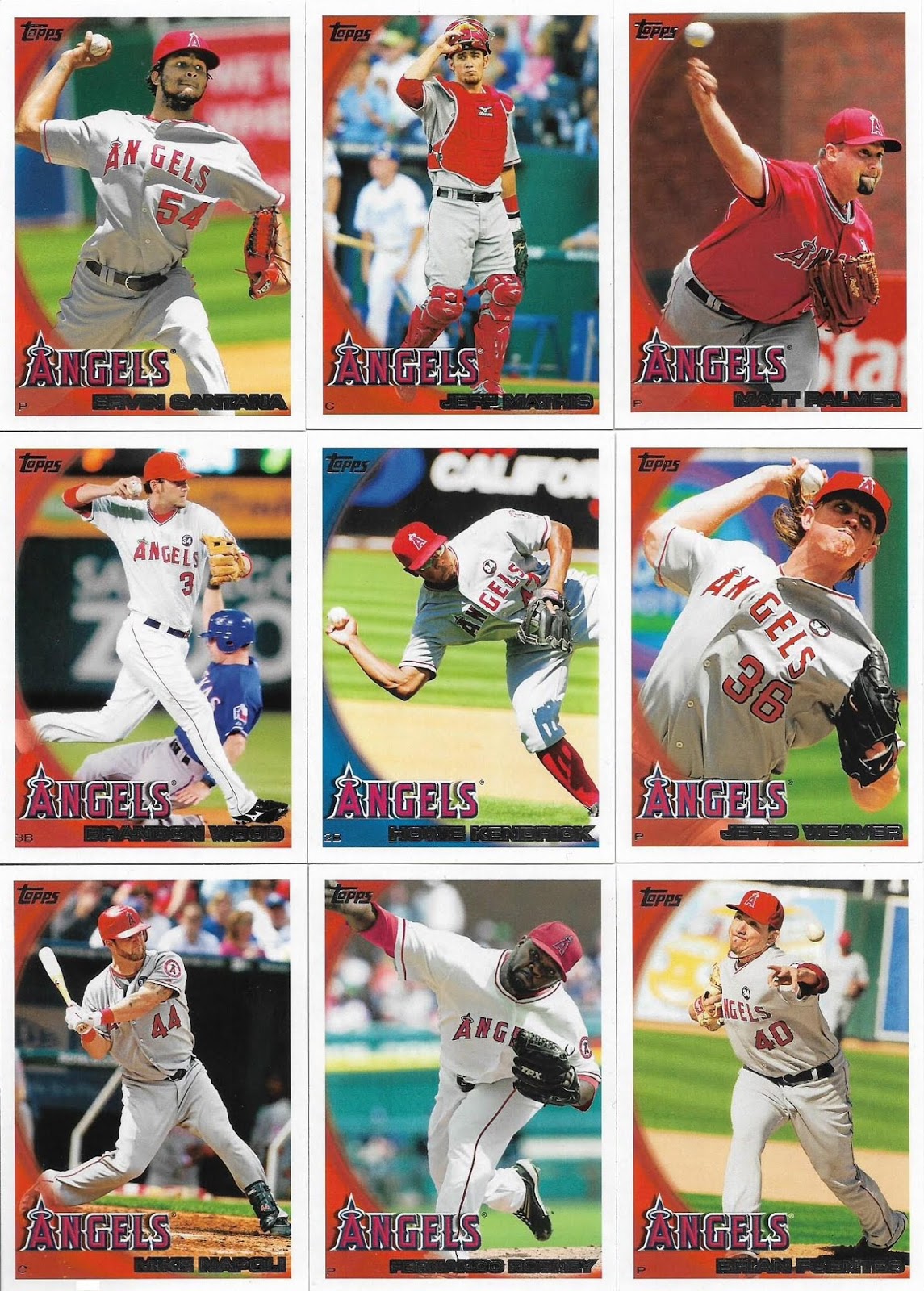 Kendrick is the only member of the Angels team set with a blue border. Kind of the opposite of the Padres example.

These are fun differences to spot and I'm glad that Topps never "corrected" these as sometimes the variation chase spoils the charm of one (or two) "mutant" team examples.

So if you know any other examples like this, let me know.

And that's all I have for you on the 1980 Topps team set, aside from the Vintage Collector story.

Or until I think of something else.

Which will probably happen.

Jeremya1um said…
I know Gary Gaetti’s 1993 Topps has his name in white instead of Red. 1994 Topps has a few different variations with a team name being black or white (Blue Jays and Dodgers, with Rick Trlicek’s Dodger card being one I’m positive of). Albie Lopez has a 1994 Topps Indians card with Rockies? coloring instead of Indians coloring. I think Reggie Jefferson’s 1994 Topps Indians card has a black team name instead of white. Andy Mota has a 1992 Topps card with his name in blue instead of white. There are probably others but those are ones I know of for sure.
January 16, 2020 at 7:56 PM

mr haverkamp said…
I did not notice the red vs blue border......but I did notice that Shirley's uniform top has white where the others with that scheme had yellow.....could this have been a bad photoshop job or did the Padres really have a white piped version of that uni in 1979?
January 16, 2020 at 7:58 PM

Peter K Steinberg said…
As per usual a wonderful, fun blog post. I can assure you all of these differences were not observed by me in the past. Thank you for writing the post to complement the article. And congrats on the article.
January 16, 2020 at 8:03 PM

steelehere said…
How about that Randy Jones name is in blue letters and all the other Padres names are in black letters on the top of their respective cards?
January 16, 2020 at 8:41 PM

SumoMenkoMan said…
Look at how beautiful those signatures are...although facsimile, they look great compared to today’s messes. Congrats on your 6th article!
January 16, 2020 at 9:45 PM

Old Cards said…
1965 Jim Grant. His card has a yellow twins pennant like all the other Twins' cards,but the border is blue, while all the other Twins' cards have purple borders. Curiously enough, it is the same blue border that all the Indians' cards have, which was Grant's previous team that he played for in 1964, not 1965.
January 16, 2020 at 10:47 PM

Nick said…
Congrats on another article! I'm no longer at my Barnes & Noble job, but hopefully I'll be able to stop at another magazine store to grab this issue.
January 17, 2020 at 12:20 AM

Nick Vossbrink said…
1977 Don Gullet name is green instead of black.
1987 Jeff Robinson is red instead of orange.
1988 Joe Price team name is much mucuh darker than the rest of the Giants.

Old Cards said…
Oh yeah. Congrats on the article. Great subject. I actually preferred the era before 1981 when Topps was exclusive. Collecting was not as complicated and as a result was more fun.
January 17, 2020 at 1:44 PM

Bo said…
'88 Topps Garry Templeton was a big one at the time (green border). There were others in that set too I think. I'm going to have to check out some of the ones mentioned in these comments.
January 17, 2020 at 2:07 PM

Fuji said…
Congratulations on getting your 6th article published. I was just at B&N yesterday, but they didn't have any issues of Vintage Collector.

As for the 1980 Topps set, I didn't notice the red vs. blue border until you pointed it out. I was fixated on the blue text used for Randy's name (which I noticed for the first time today). But a quick look over at COMC revealed that Topps printed player's names in a variety of colors that year.

When I first started collecting, my neighbors and I kept trying to trade for this 1981 Donruss card of Al Hrabosky. We all thought it was a rare error, because we only had one copy between us... and it features a purple border, while the rest of his Braves teammates have a light blue border on their cards. I don't have my 1981 Donruss set sitting in front of me, but over on COMC the Hrabosky was the only card in the entire set that uses the purple border.