January 23, 2020
(Today is National Handwriting Day. You don't need me to tell you that modern athletes' handwriting is abysmal. Look at any number of autograph cards on the market. It baffles me that people collect scribbles that look like they were created by a 16-month old. But handwriting doesn't mean as much to the general public as it once did, and the story goes that National Handwriting Day was created in part because of a fear that the art of handwriting was being lost. This was in 1977. Little did they know ... . Time for Cardboard Appreciation. This is the 288th in a series). 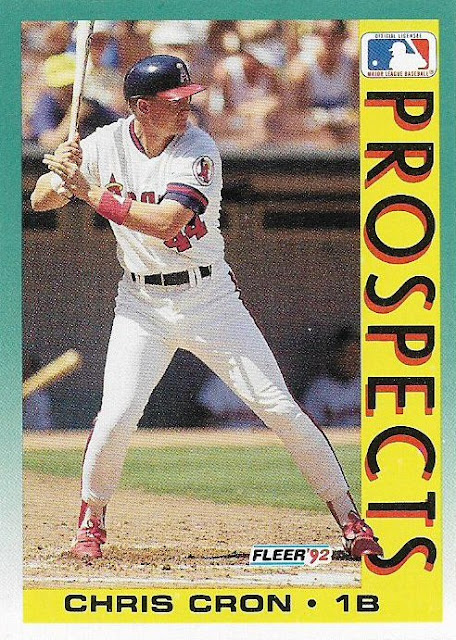 Whenever I page a set into a new binder, potential blog topics always pop up in my brain.

Such was the case as I was adding my 2019 Topps Holiday set into a brand new red binder. I just completed the "task," which took me four days because my goodness life hates baseball card activities, and no less than three blog ideas sprouted from that activity.

None of them are particularly fascinating. But I found them interesting and that is exactly all the requirements needed for a blog post on NOC.

One of those thoughts came about when I added two similar players that were just two cards apart: Cards HW92 and HW94. 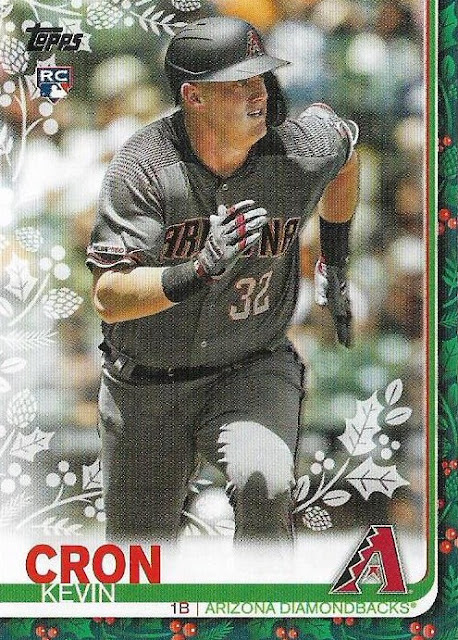 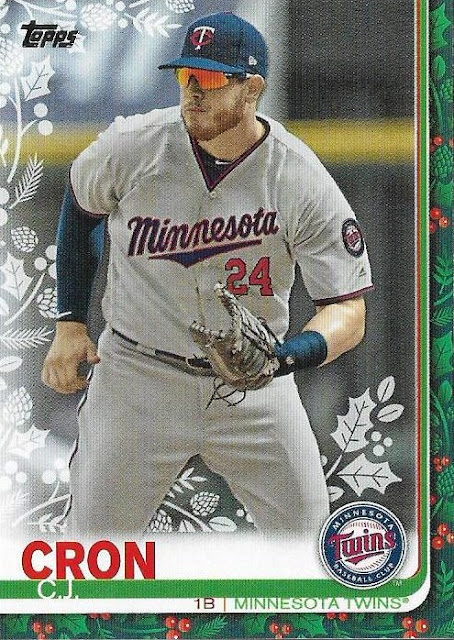 The Crons are brothers. You probably knew that.

The Crons are both sons of Chris Cron, who also played in the major leagues. You probably knew that, too.

But I didn't know that. It took paging a complete set to figure that out.

C.J. Cron has been in the majors for more than five years. He's spent most of his time with the Angels, which means he barely registers with me. Got to be Trout or Pujols if you're going to play on the Angels and get noticed.

Kevin Cron -- which is two digits short of Kevin Cronin, the lead singer for REO Speedwagon -- played 39 games for the Diamondbacks last year, his first season in the majors. I heard of him briefly, because he plays for a Dodgers division rival.

I knew I had a card of his. I knew it was from 1992 Fleer with that ugly yellow Fleer used for the prospects cards in 1992. But that's all I knew.

But Cron, now the manager for the Diamondbacks' Triple A team in Reno, Nevada, is one of the very few major league players with not one, but two sons to reach the major leagues.

That seems like something everyone should know about. Chris Cron should be world-famous by now.

Here is a list of the former MLB players to send more than one son to the major leagues:

That's it. That is one exclusive club.

With the exception of Larry Gilbert, who played for the 1914-15 Braves, and Jimmy Cooney, who played in the 1890s, I knew about all those other baseball families. They are very well-established and tales about all of them have been part of baseball talk for years.

Perhaps this will happen for Chris Cron now.

It's amazing what you can figure out going through your baseball cards.

Even if it's probably old news to a lot of fans by now.

BaseSetCalling said…
No, I didn't know that. But now I do!

I should probably know that about the players who will play for my team this year, even when no one else knows who plays for the team any more.

Jamie Meyers said…
I met Chris Cron when he was managing in the Tigers' system awhile back now. Really nice guy. I take it that his sons are pretty cool too, from what I've read. I have a large autograph collection and I agree that most modern day players' scribbles are crap. I think most of the people interested are young kids who are prospecting. There's no shortage of those people out there and they've made 'graphing much less enjoyable. I've gotten to the point where I'm mostly just concerned with getting old timers who've actually accomplished something.
January 24, 2020 at 10:09 AM

Nick Vossbrink said…
Another from the Cal Sr dept is Felipe Alou who has one son who played in the Majors and another who'll presumably manage…
January 24, 2020 at 10:16 PM

Fuji said…
I'm the outlier, but you probably knew that ;) I've never heard of Chris or Kevin until this post. And I recognize CJ (mainly from stumbling across his rookie cards over the past few years), but couldn't tell you much about him.
January 25, 2020 at 8:24 AM