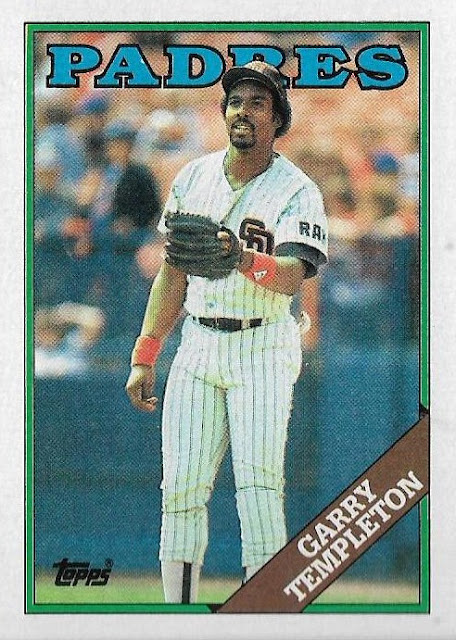 I have a feeling there will be more than two of these "Spot the Difference" posts, judging by the reaction to the first one.

There were lots of responses to my last post on this topic, both in the comments and on Twitter, with additional examples of cards that feature design color elements that don't jive with the design colors used with fellow teammates.

I thought I'd show some of those suggestions here, along with a couple others that I knew about that I didn't show the last time.

The 1988 Topps set was mentioned a lot because it featured several color differences and I knew that. The one that gets mentioned the most is the Keith Comstock card, which is actually a variation that was corrected, which is why it received so much attention back in the "error frenzy" of the 1980s. 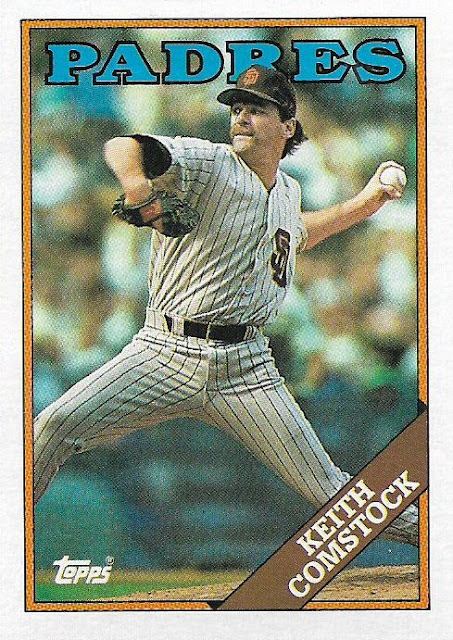 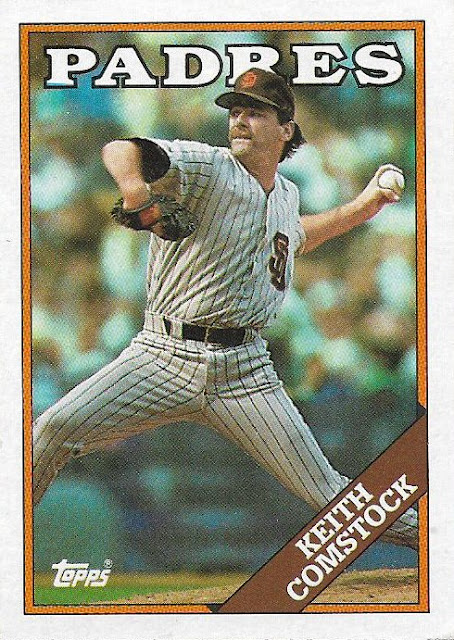 But enough of that, we're here to find the differences that were never corrected, making those strangely colored cards truly unique. 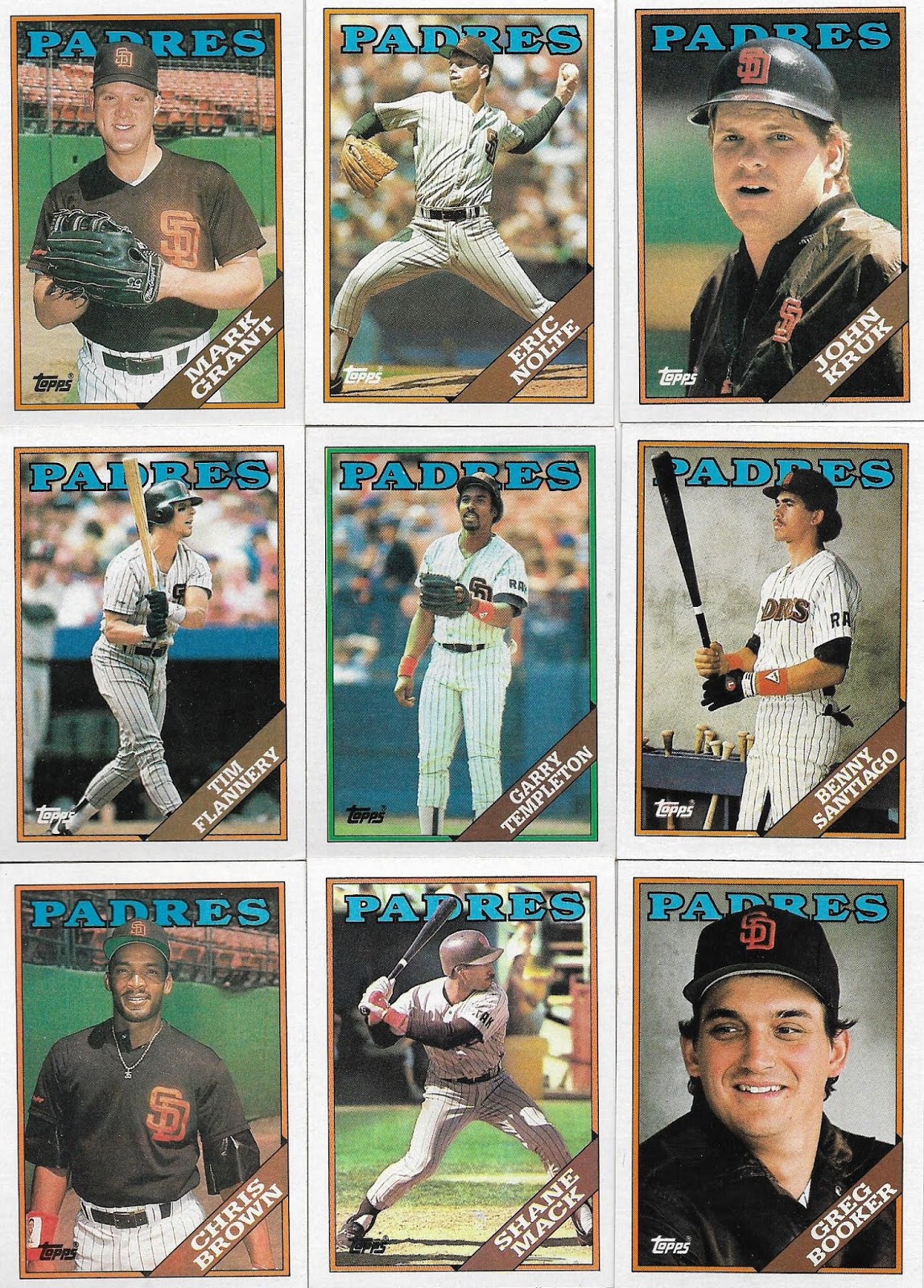 Comstock wasn't the only Padre out of whack. Gary Templeton, bizarrely, features a GREEN border.

I don't know the reasons why there are differences like this, probably has to do with printing sheets and such, but just in case Templeton was mistakenly lumped in with some other team, the teams that had green borders in 1988 were the Royals, White Sox, Phillies, Expos, A's and Mariners. 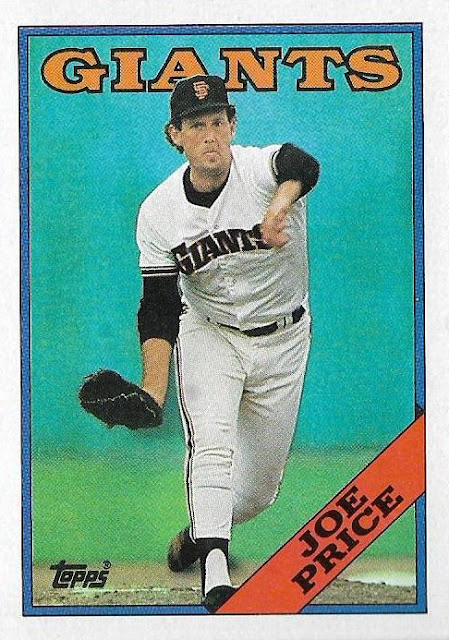 The Padres and Giants always seem to come up in these design color goofs. Here is another one from 1988, which showed up 11 years after the Giants' Darrell Evans displayed purple name letters in 1977. 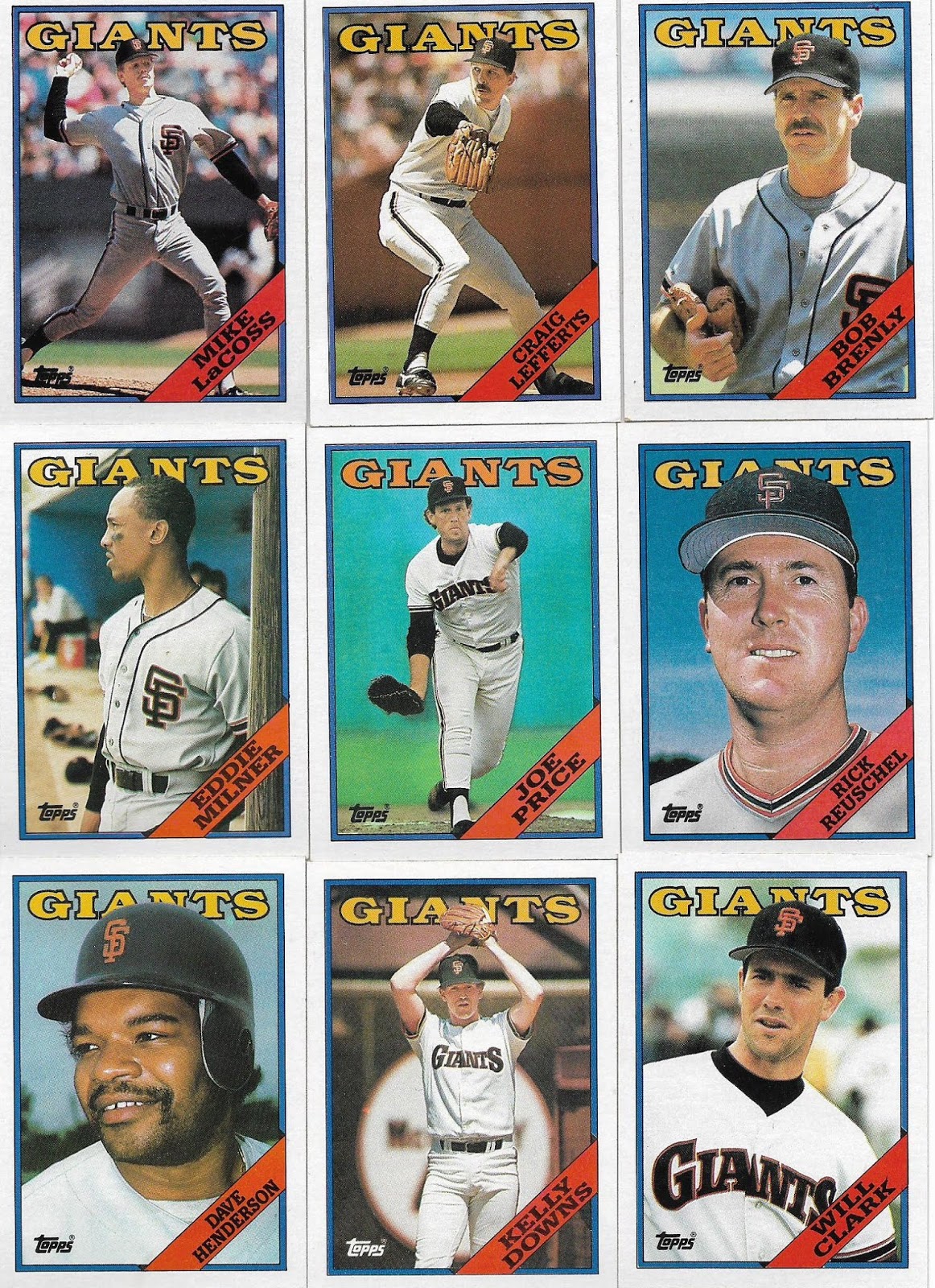 You would think all of the Giants would have orange team names given their color scheme, but this was during the period when Topps rarely coordinated team colors with teams depicted, so all but Joe Price gets squash yellow for their team name. 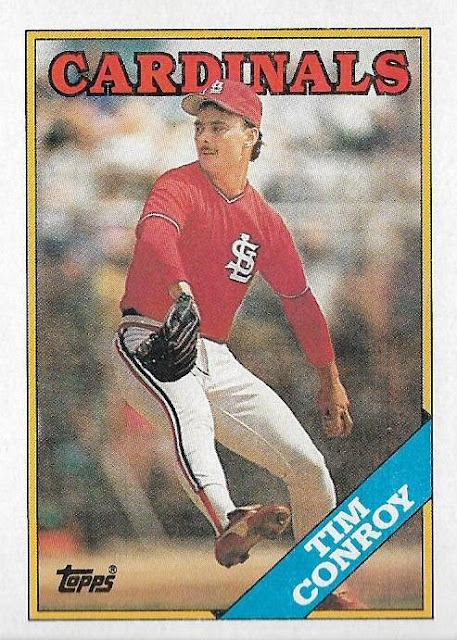 The other 1988 design difference I'm showing here is a name color change, focusing on a long-forgotten Cardinals pitcher. 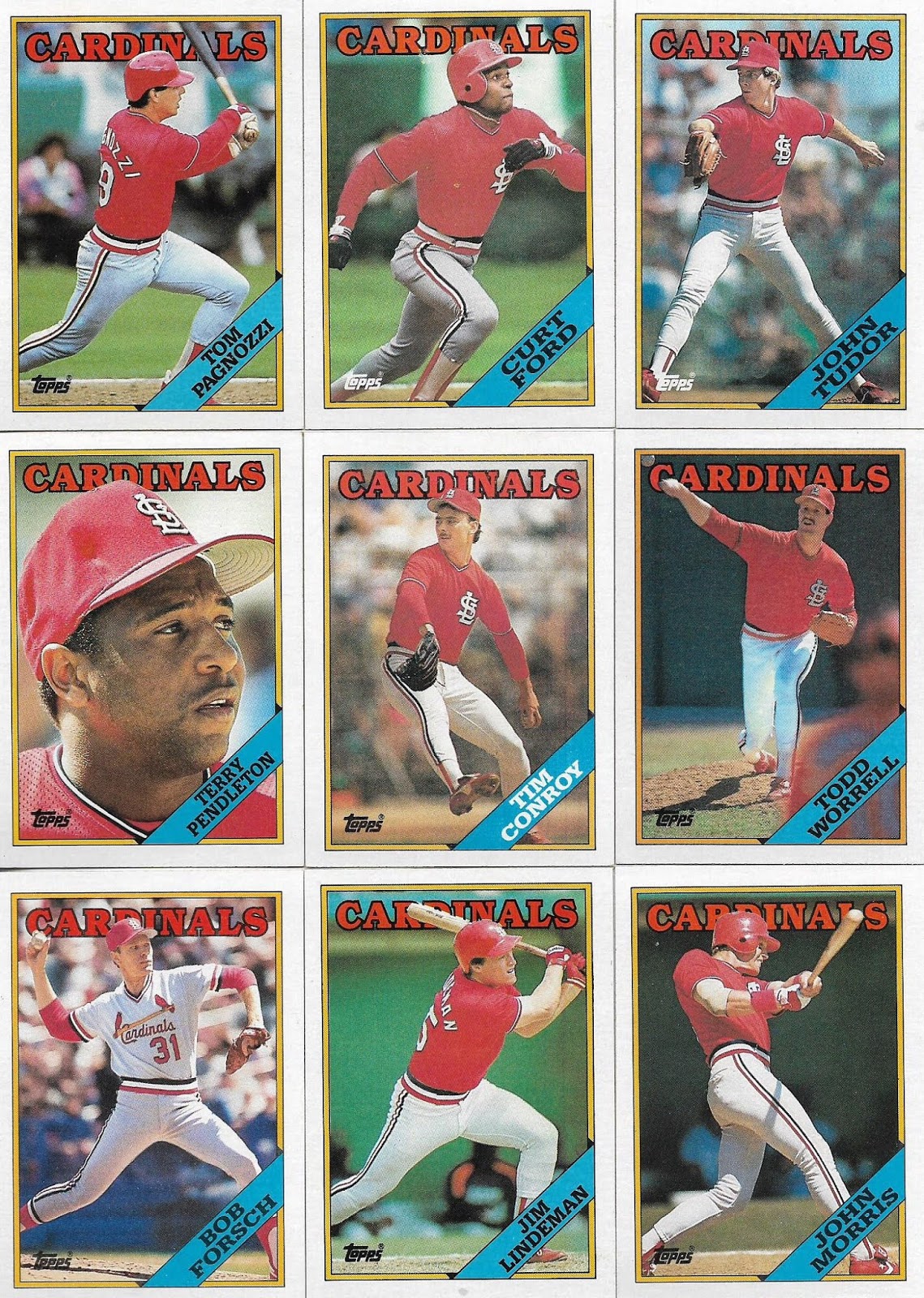 At least collectors will always remember his 1988 Topps card! 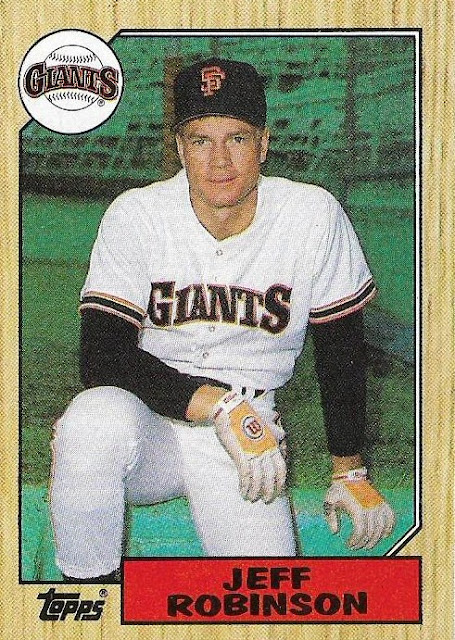 Yep, it's another Giants player. 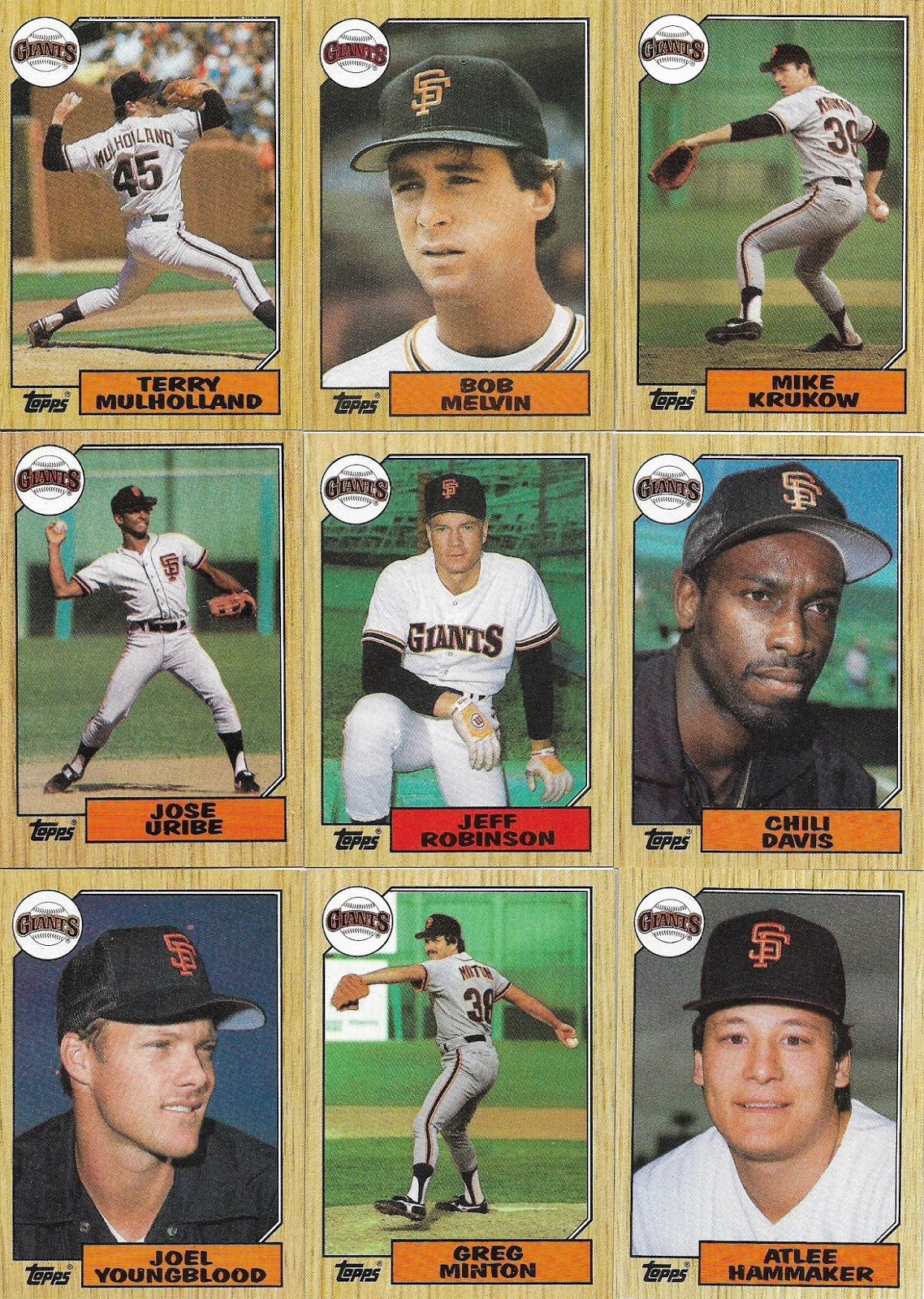 Wow, that really stands out.

I blame myself ignoring the 1987 set for taking so long to see this first-hand. There are some sets that you just assume were immune from this kind of "quality control" issue and I had lumped 1987 in that category. But apparently not.

One set that definitely does not escape design consistency issues is the 1977 Topps set.

I've already shown the Evans, now here is another one that was mentioned and is pretty jarring: 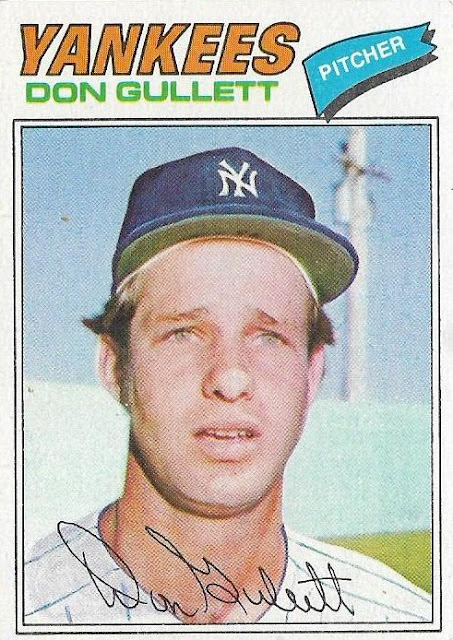 If all you're noticing is Don Gullett's airbrushed hat and uniform, then maybe this post isn't for you. 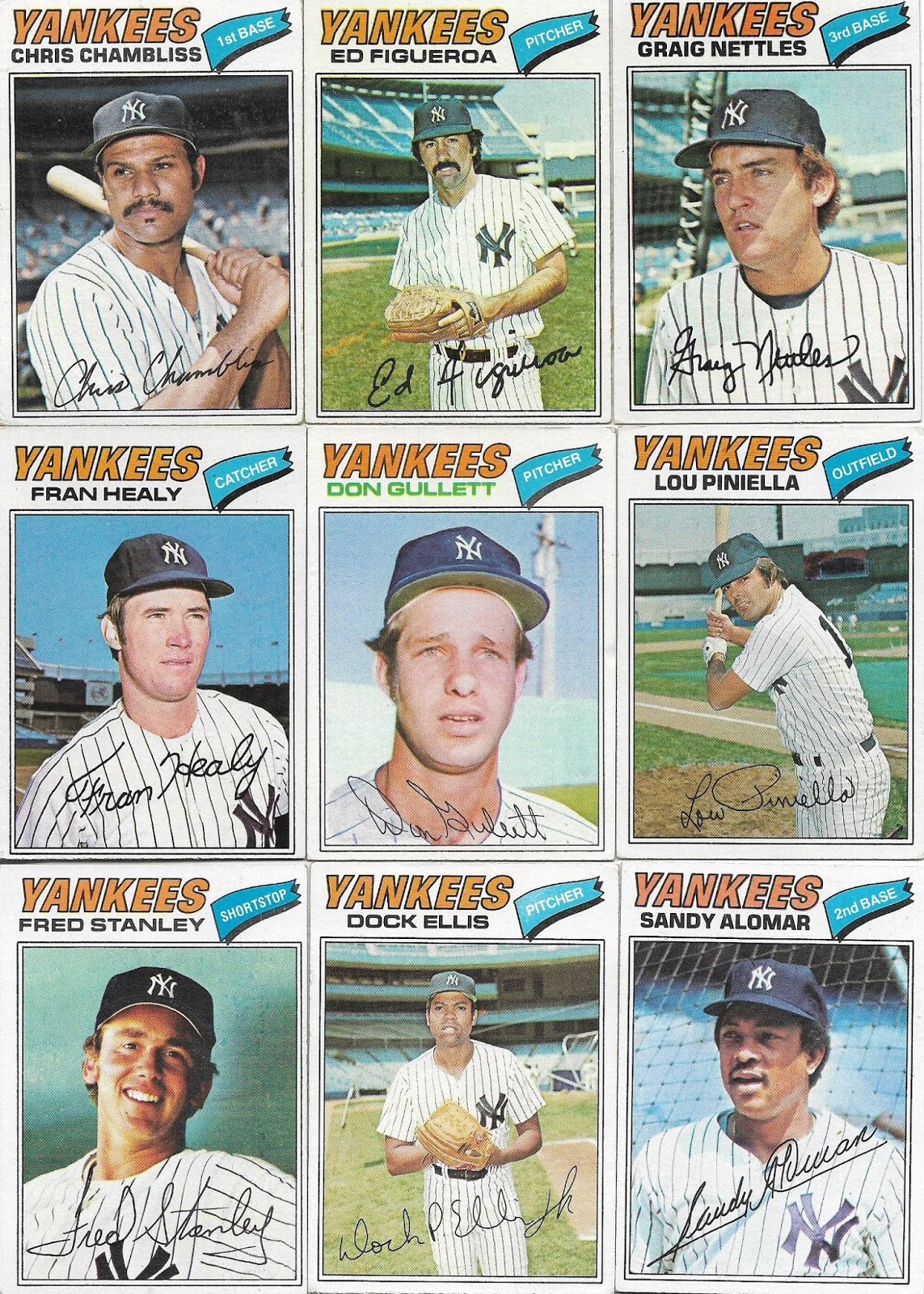 My goodness, where did that green come from?

Green name letters were used for the Phillies, Angels, Expos and Red Sox in the '77 set. Gullett's old team -- the Reds -- featured black name letters, just like the Yankees, with whom he signed as a free agent. Should've been an easy switch, right? 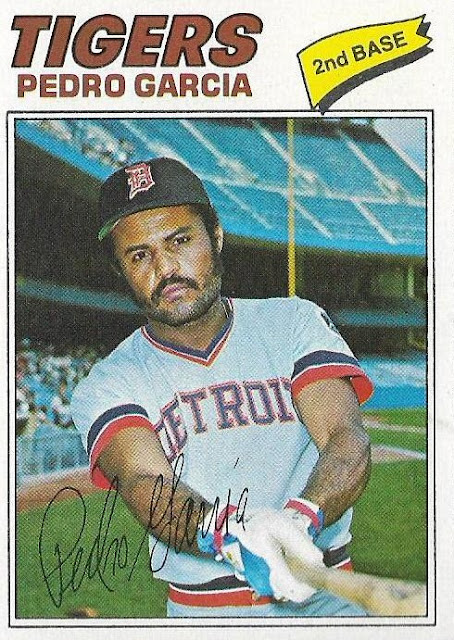 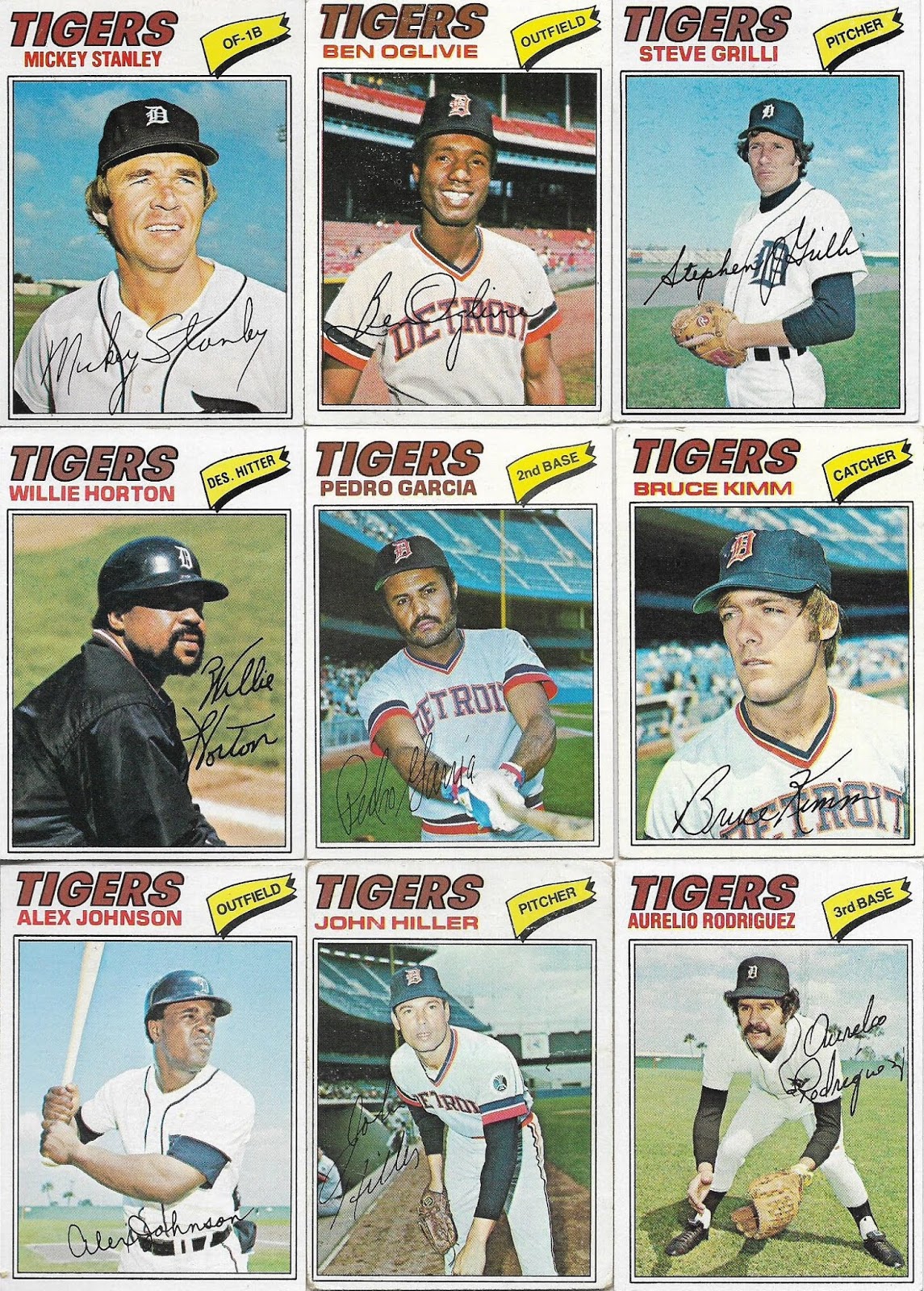 Brown name letters is something 1977 Topps just didn't do (just like the purple name letters on the Evans card), but there it is on Pedro Garcia's card, the brown of the team name bleeding into the player name. 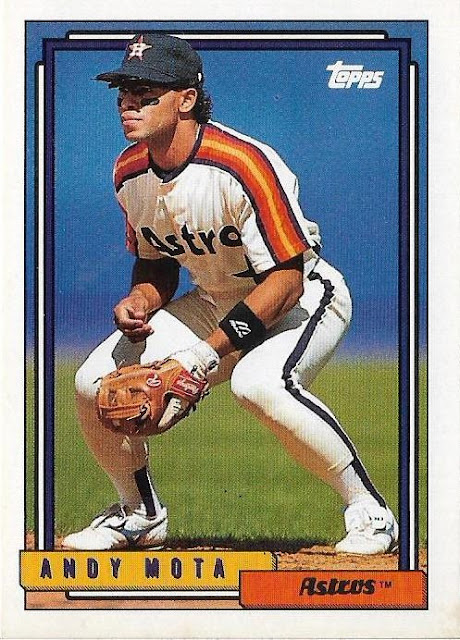 More player name color differences, this time with the 1992 Topps set and the Astros. 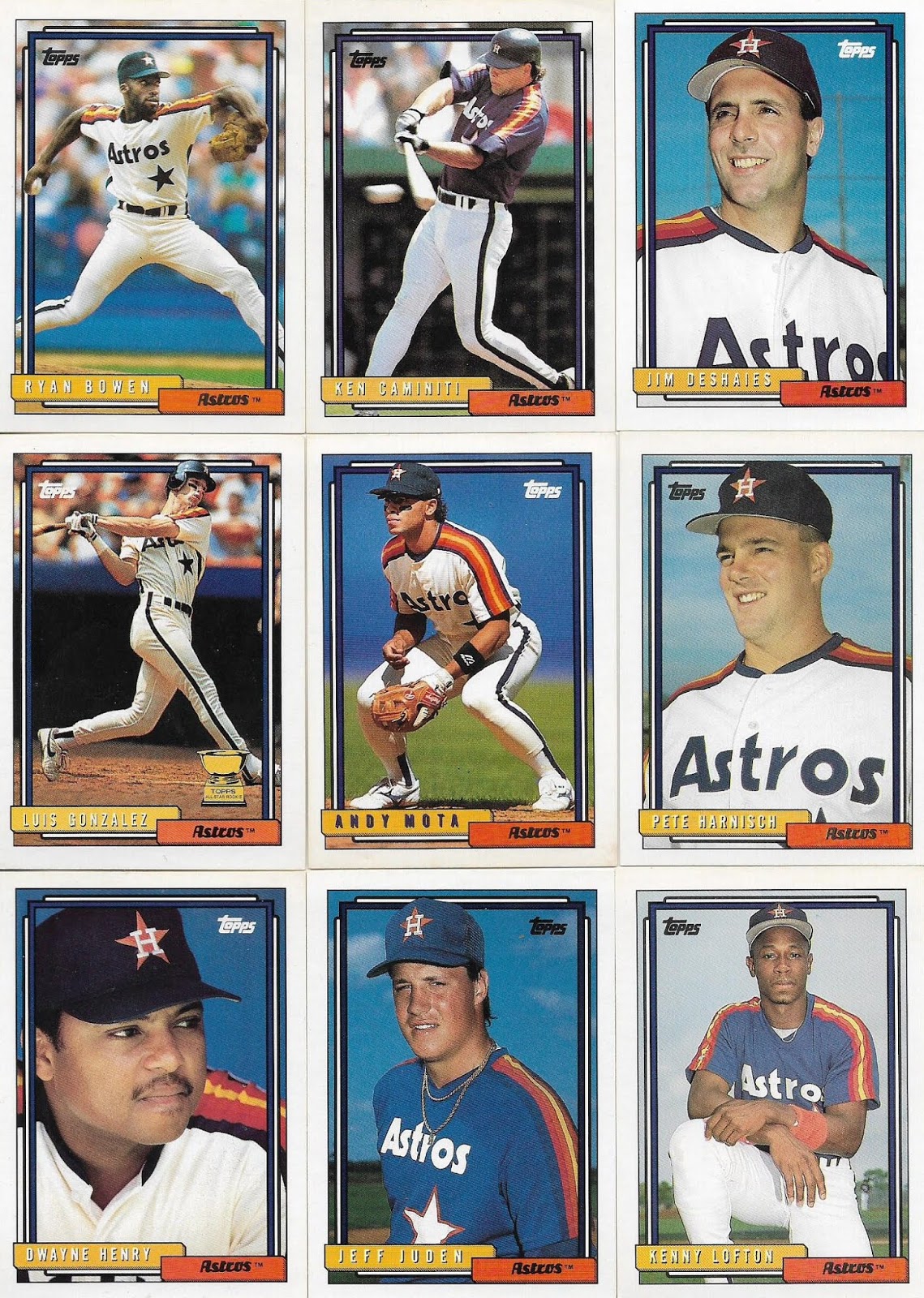 Most of the Astros' names in the '92 set are in white, but Mota's is in blue.

But he's not the only Astro with the blue-name difference. Gerald Young also appears with a blue name (could be purple, I suppose, but I'm going with dark blue).

And that's still not the last of the Astros with blue names. I don't have a card of Andujar Cedeno to show here, but his name is in blue, too.

Once you start to get to three or four design color differences, then I wonder if it's a goof or just one of the multiple colors used for a specific team. A couple of people mentioned the 1994 Topps set, but there are so many color differences within teams -- several teams are shown with white team names or black team names -- that they don't seem all that special to me.

But the '94 set deserves further examination, which is why I know there will be another post on this at some point. I also want to purchase a 1965 Topps Jim Grant card to show the wonderful difference between that blue-bordered card and all the other purple-bordered Twins cards.

But enough about Topps, I want to go to a couple first-year sets for other card brands before I get out of here. 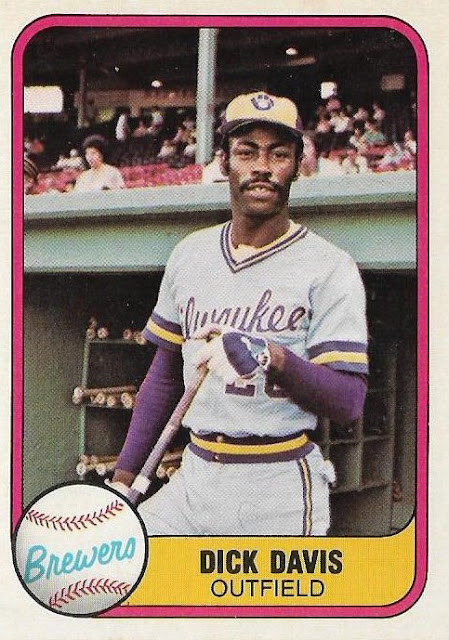 You would think this topic would be right up 1981 Fleer's alley. All the crazy errors and variatons -- which are even more apparent when you page them in a binder by card number. All of the teams are grouped by card number -- except when they AREN'T.

Yet, the Dick Davis card is the only one that I could spot with a different color border from his teammates (I'm ignoring the Hal McRae and Amos Otis examples, as those are second cards of each of those players and somewhat "themed"). 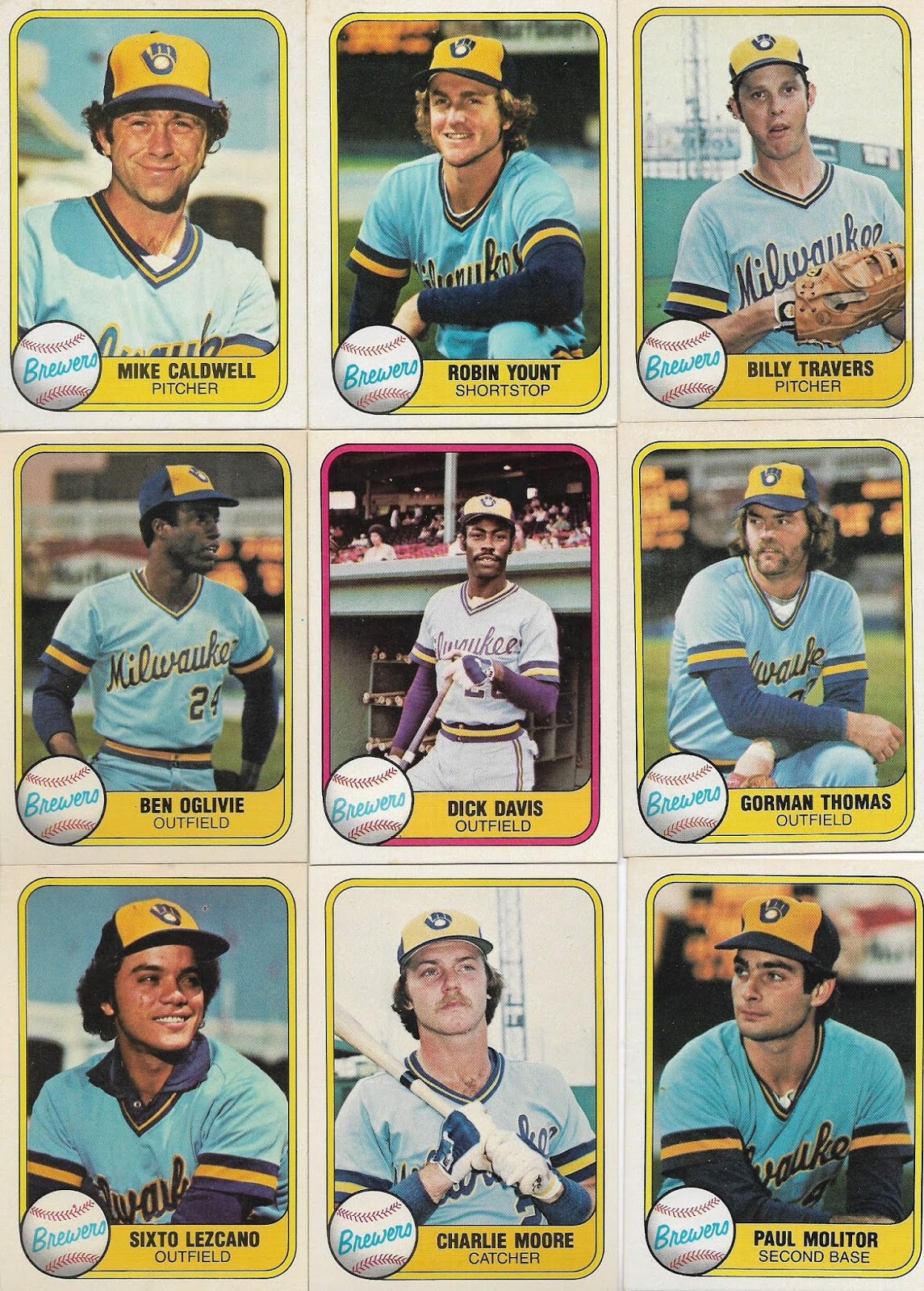 This exercise has made me wish I sorted my binder cards by team rather than card number as with Fleer I could find differences easily. Topps was a nightmare. (But I'm still not going to re-sort all of my completed sets by team).

The 1981 Donruss set doesn't quite have a numbering format that corresponds with the team. Instead there are pockets of players from the same team interspersed with a single card of a player from some other team all by his lonesome.

Still when a card like this happens, you take notice: 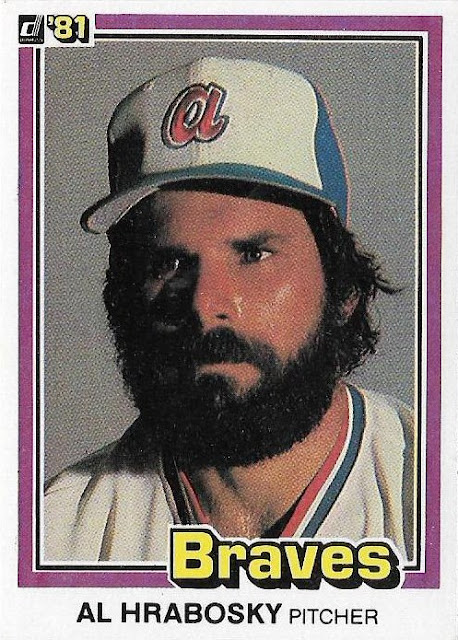 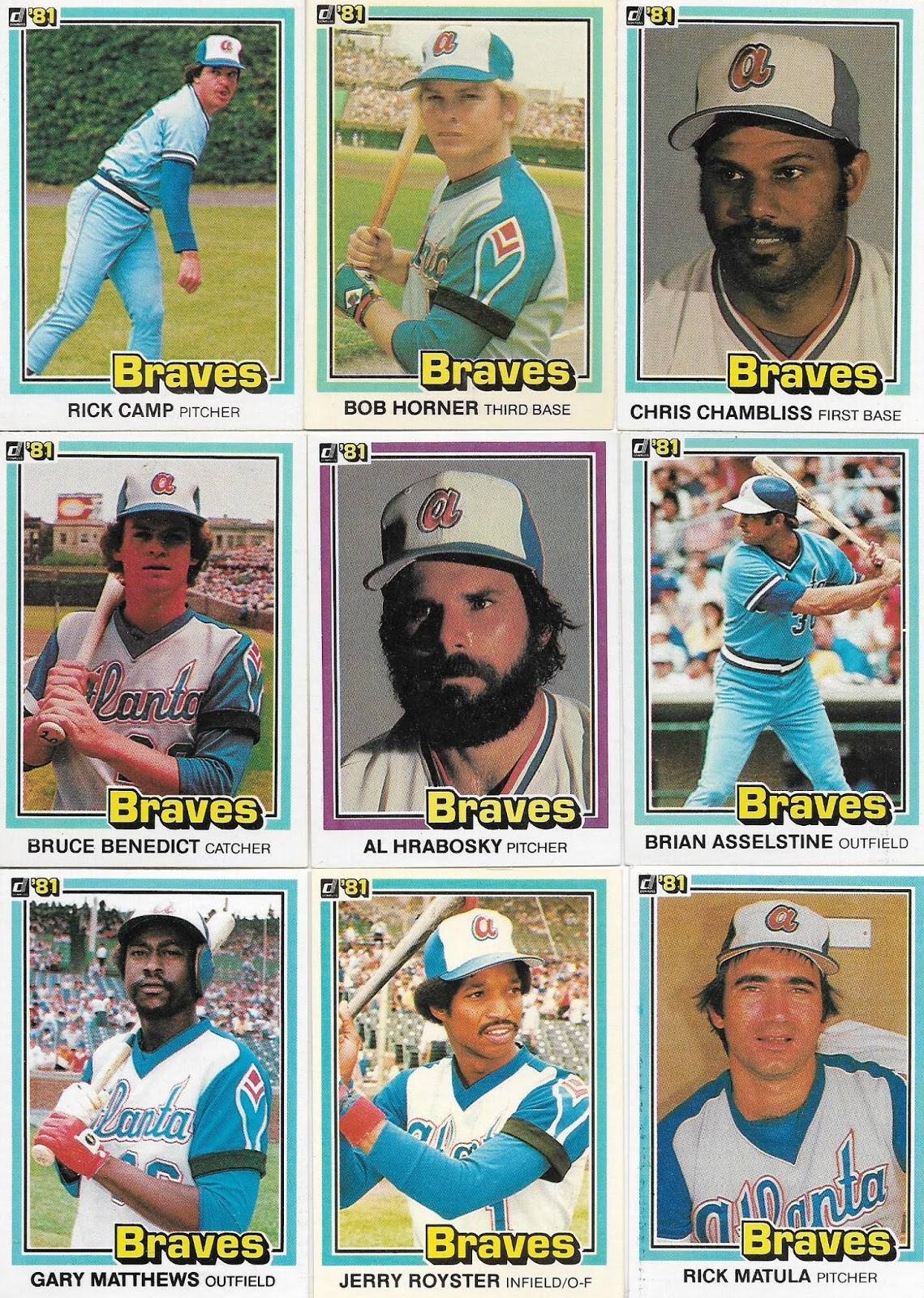 Again, I have no idea why, in printing circles, a single card would be printed with a color that wasn't used anywhere else in the set, but that's the wild world of 1981 Donruss.

It would be fun to find modern examples of this. I have my doubts that many exist. Topps' color schemes are now entirely in agreement with MLB team colors, which avoids weird differences in most cases.

Once Topps went over to foil in the mid-1990s, that pretty much eliminated the chance for differences with team names or player names. But now that foil is gone, I'm still holding out hope.

Stay tuned for Spot the Difference 3. ... If I don't forget.

Base Card Hero said…
I always noticed the odd differences in 1988 Topps, but never went thought about it too much. Seeing all the teams together really makes them stick out...
January 20, 2020 at 8:31 PM

Adam Kaningher said…
A more recent one that comes to mind is Garrett Atkins in the ill-fated 2008 reboot of Stadium Club. Pretty sure he got the White Sox treatment.
January 26, 2020 at 5:28 PM