What happens when you get out there 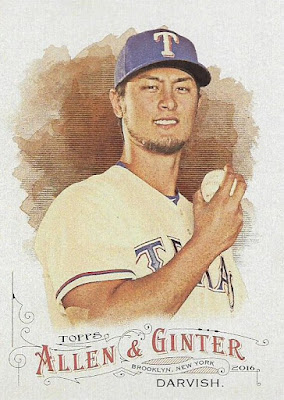 I've been immersed in one of those all-consuming work periods, day after day of tasks and deadlines, during which you dream about what you're going to do when you finally get that day off.

In younger days, I'd be plotting an outing, maybe a road trip or concert. But with family commitments and advancing age, those daydreams have become much simpler. I just want to get some errands run.

I had it all plotted out for today. I had lined up everything that I needed to do, long-overdue commitments and purchases and payments. And then a weird thing happens: you get out in the fresh air, after being sequestered in that work cave, and you can't remember what you were supposed to be doing.

I sat in the parking lot for several minutes, racking my brain on what those things were that I wanted to do.

Even when I reached the card aisle, I stood and stared kind of lost. I knew that I had a plan. I had repeated it to myself in my head during one of those "if only I had time" mind-rants. But that time had come and I couldn't remember what I was supposed to do.

In that haze, I settled on a blaster of A&G, because I knew the minis wouldn't fail me.

But I was starting to wonder if I made the wrong move.

Out of the first pack came this: 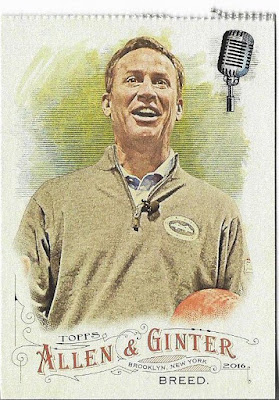 The card is a victim of the crimping machine -- I'm sure it has an actual name -- that seals packs. I understand mistakes happen when there's mass production and automation, but in A&G that kind of hurts.

Then, a few packs later, this fell out: 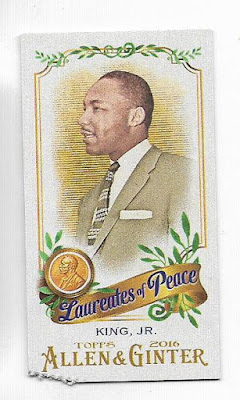 I had a dream, but it wasn't pulling this very notable mini with one corner gone.

I wasn't pleased, knowing that A&G isn't on the cheap side.

Not only that, but this was a very mundane blaster. There were just a few semi-notable cards during the first 5 or 6 packs. 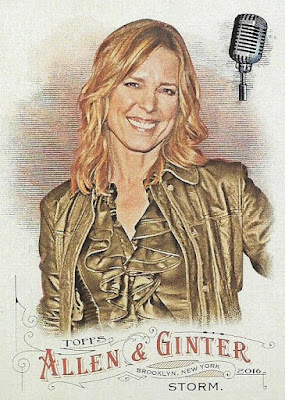 Hannah Storm and I go way back to when she was first appearing on CNN Sportsnight at the dawn of the 1990s. Those old Sportsnight broadcasters, Storm, Dan Patrick, Nick Charles, Fred Hickman, Jim Huber, take me back -- back before I had even discovered ESPN. Good times. 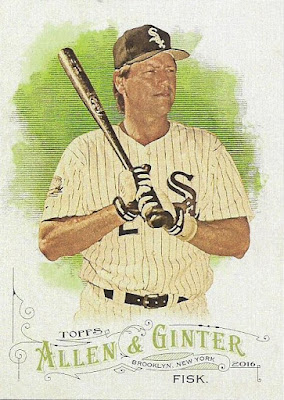 This is a killer. I realize Fisk spent a good chunk of time with the White Sox. But he's not a White Sock. He's a Red Sock and always will be. 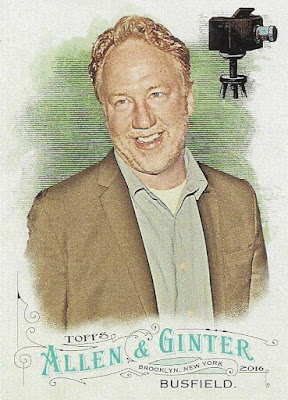 The back of Timothy Busfield's card fortunately mentions Thirtysomething and Revenge Of The Nerds. But it's appearing in essentially a baseball card set, and there's not a word about his role in Field Of Dreams.

I was getting a tad annoyed. Damaged cards and no perspective. And the baseball players, as dull as you could get. With the exception of Fisk, Darvish and a couple of Giants (Belt and Crawford -- ick), every other guy was non-descript. Why must I pull Jose Peraza in everything this year?

Only one thing was getting me through: It seemed to be a Dodger-friendly blaster. 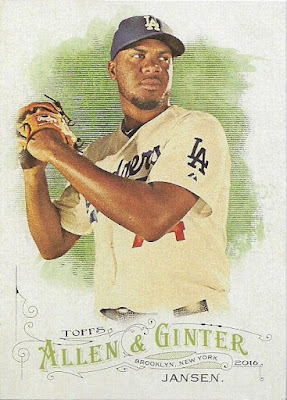 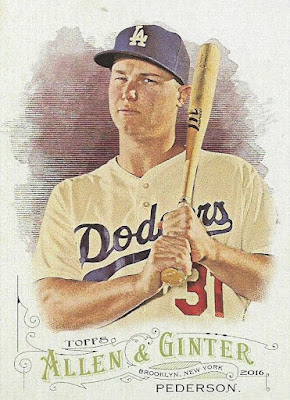 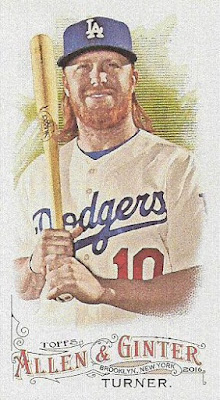 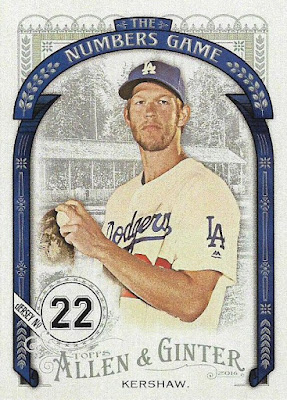 It almost seemed to be a theme of the blaster -- aside from the damaged cards. And that raised what I was sure was some false hope:

Maybe this Dodger trail was leading to something even better. Sometimes blasters work that way, right? Right?

Then, as I had just complained about the MLK mini on Twitter radio and was opening my second-to-last pack, this appeared: 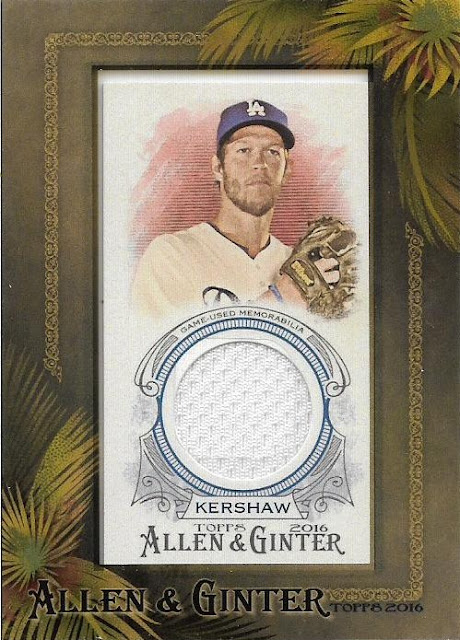 This is a first. I have pulled precious few hits of Dodgers since my return to the hobby. An autograph of Johnny Podres probably a decade ago now has long been the highlight. But I had never pulled a hit of my favorite player until today.

I am on a blaster run of luck this year that I have never experienced. An autographed Robinson Cano card, a Rod Carew relic and now a Clayton Kershaw relic. All from either Walmart or Target.

I am now one of those collectors who used to annoy me because every pack they picked up contained a hit.

But it occurred to me, in this very small way, that this is what happens when you get out there. Yeah, you get the bad (damaged cards) with the good (Kershaw relic). But you get the experience, too. Every day when I'm online, I am saddened by the people commenting on whatever crisis or occurrence that is happening very far from them. When it gets really depressing, I make the same complaint: "Go play outside!" (Written as a request for them and a directive for me). The world is very different -- and better -- when you go and do.

Eventually, I figured out all the things I was supposed to do, and did them. And the Kershaw relic added a happy tone to the rest of the day.

I'm headed back into my work cave for the next few days. And I'll make another yearning list and hope to remember and follow it. But it's really not whether I accomplish all that I desired. It's the experience, whether it's a hobby experience or community experience or family experience. You don't have to climb a mountain or travel overseas. Just get away from your phone for a little bit.

Stop worrying about Kaepernick or some gorilla at the zoo or whatever story Yahoo is throwing at you today. The important thing is what YOU are DOING.

Funny what you get from a single blaster of baseball cards.

Adam said…
Like you I don't care about what Kaepernick did or didn't do, nor do I really care about tabloid celebrity news ... all I really care about is what's happening in my community and what me and my family are doing. It's nice thought that a simple thing like that Kershaw card can brighten your whole day. It's the little things, right?
September 1, 2016 at 8:28 PM

Brett Alan said…
Awesome! What a sweet pull. So happy for you. And your advice is very sound.

I bought some cards yesterday and today--yesterday was the last day to use those coupons from the Wal-Mart pizxa packs. I'm a low-end guy, ended up buying my third blaster of Opening Day--going to try to complete the set (anyone else doing that, and want to trade when I get through it all?). Also got a couple of packs of Bunt to check them out, and then today bought a repack in a dollar store because there was a nice Prizm Todd Helton showing. All low end stuff, so a hit like that would be too much to ask for, but if I can get something full of Mets the way you got those Dodgers, I'll be happy. B^)
September 1, 2016 at 10:33 PM

Billy Kingsley said…
I actually collect those pack-sealed cards. To me they are a legitimate error.
September 2, 2016 at 12:42 AM

My Best Friend Collects Chipper Jones said…
It's too bad that since Allen & Ginter is a baseball card that it wasn't mentioned that Timothy Busfield played semi-pro baseball in Sacramento.

Here is an article about Busfield and his baseball experience in Sacramento and what he's done to help out there.

Michael Ott said…
Really enjoyed the post. Your description of the unending piles of work and only errands to look forward to sounds very familiar. Good call to escape with an A&G blaster, and congrats on the sweet hit!
September 2, 2016 at 9:32 AM

Brian said…
Busfield was also on film in a Twins uniform in the film "Little Big League" in which the owner of the Twins passes away and bequeaths it to his grandson, who names himself manager.
September 2, 2016 at 11:03 AM

Commishbob said…
Sportsnight on CNN was the absolute best. Hadn't thought about that crew in a long time. Thanks for jogging up a few memories.
September 2, 2016 at 4:45 PM

night owl said…
Mark was referring to my comment that A&G is "essentially a baseball card set," and it is, because there are more baseball players in the set than anything else. Far more. The appeal of A&G for those who like it, is that there is more than baseball players, and the thought that goes into those other people, most of whom are hardly fillers. You can choose to dislike it, but it's important to understand the concept first.
September 4, 2016 at 11:36 PM

Fuji said…
Congratulations on pulling that awesome Kershaw! If the MLK isn't fit for your collection, you can always send him my way. I'll give him a nice, loving home in my Damaged Card PC.
September 5, 2016 at 11:57 AM

GCA said…
No worries. I got it from another trader. I thought I was getting the same (last) three short prints, but one was Peraza.
September 6, 2016 at 10:42 AM