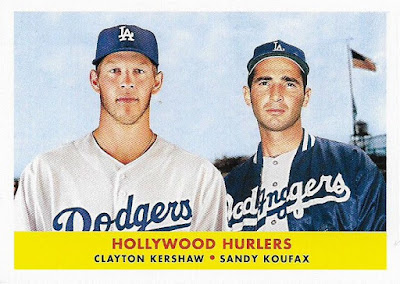 This is the first card -- in my collection anyway -- that pairs up Clayton Kershaw and Sandy Koufax. It's from 2012 Archives. It's not a great card, but significant, as people on a national level were starting to see the Kershaw-Koufax similarities after Kershaw's phenomenal Triple Crown season in 2011.

Tonight, Kershaw is facing the Atlanta Braves. It might be the biggest mismatch of the season, given Kershaw's roll and the Braves' moribund offense. But you know that as soon as a large segment of fans and pundits expect something to happen, that's when it won't happen. Baseball's tricky like that. So, let's see how it all turns out instead.

Here are Kershaw cards from "today": 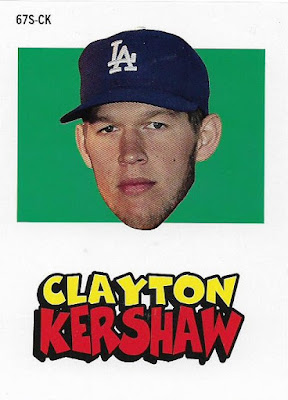 Technically not a card, but you can't tell me that, because I ain't sticking it. You know you've made it when they put your bodyless head on a piece of paper and sell it to the masses. 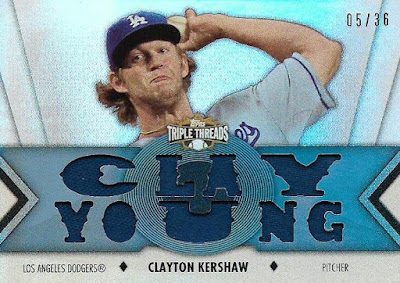 This is the card that amuses me in this segment. I think when I get sick of collecting as I do it now, maybe I'll just become a Triple Threads collector and bask in the ludicrousness of it all. By the way, I correct my earlier statement about what I thought was my most exclusive Kershaw card. This is my most exclusive Kershaw card. Mom would be so proud. 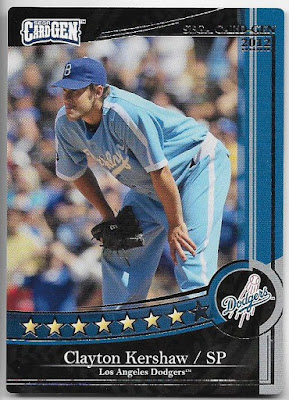 This is how to make a collectible game card. Use an interesting photo that you can't see anywhere else. The Sega cards do this much better than stuff from the states. 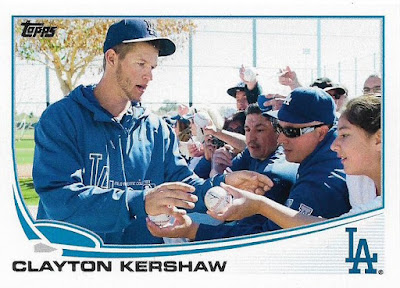 It's a shame it takes a shortprint to feature a photo of star player signing autographs for fans. But that's what they did back in the sea turtle days. Nice card. 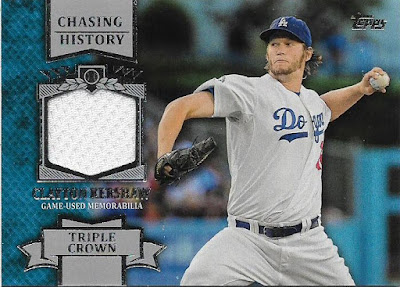 Although not the most attractive relic card (actually it's OK), it does the best job of summing up Kershaw's 2011 season. I like summary cards. There should be more of them. 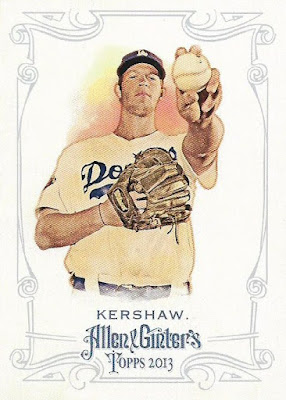 More of Clayton showing you the ball. Unlike the 2009 A&G card, this image works best on the base card, not the mini. It's pretty cool, but I think they can retire that shot now. 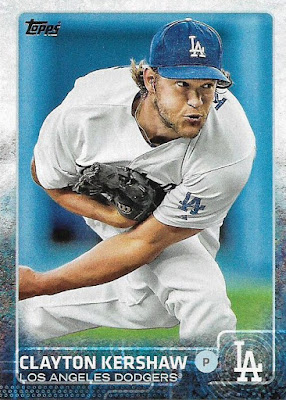 This is the case for every player who lasts a certain amount of years, but Topps is so reliant on action photos that so many cards in a player collection become almost disposable to the eyes. They have no meaning. But this one is different. I knew from the moment I saw it that it would be one of my favorite Kershaw cards. Pretty good for a base card. 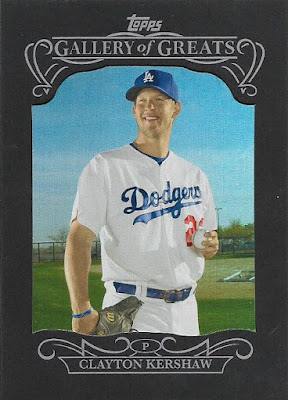 Something tells me that if I didn't enter a group break, I'd still be searching for this card. This card is classy and shiny at the same time. The image harks back to my favorite era of collecting, the '60s, '70s and '80s when poses like this were standard. 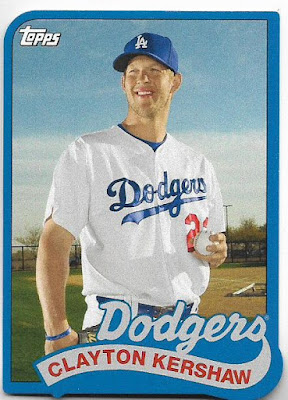 Although Topps did use it a few times that year. 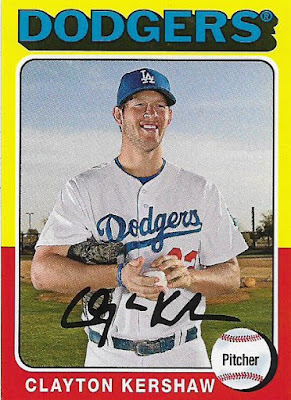 Whenever Kershaw appears on a '75 tribute design -- I believe it's been twice now -- it is my duty to obtain that card. It keeps me looking forward to 2024 when 36-year-old Kershaw will appear in Topps Heritage in that design. Here are the '75 color combos that I would like Kershaw to appear on:

Here are the color combos that I would rather not have Kershaw appear on:

If I was a betting man, I'd say Kershaw appears on orange-brown, pink-yellow, purple-pink or red-yellow. It also depends on whether he's an all-star in 2023, which of course he will be. 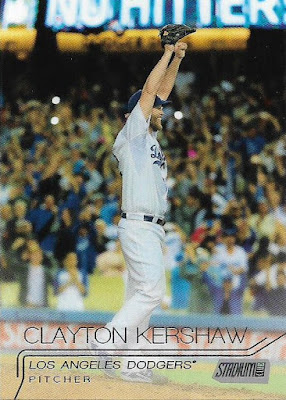 Brett Alan said…
I spent a few moments wondering why that Triple Threads relic spelled out "Clay Young". B^)