The new king: the early years 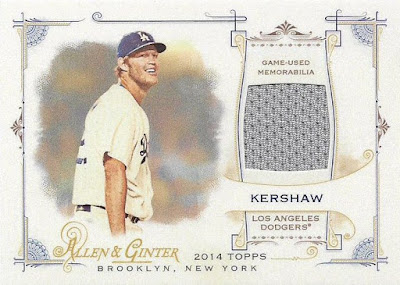 Player-collecting comes third in my hobby responsibilities. Set- and team-collecting goals far outweigh any thoughts of accumulating cards of a particular player. The easy test for this is when I go to a card show: not once have I walked into a show intent on finding multiple cards of a certain player.

Still, I like my Kershaw cards, and this week I reached a milestone in the Kershaw collection.

The above card, sent to me by Dave of Tribe Cards, was the equalizer. 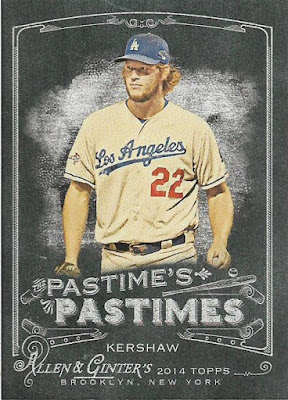 This card, also sent by Tribe Cards, was the record-breaker.

I now have more cards of Clayton Kershaw than any other player in my collection.

Even more importantly, unless someone drops a large stack of Hideo Nomo cards on my front porch or Kershaw suffers a career-ending injury in his next start, that is the way it will stay for as long as I am collecting. I see card companies making abundant cards of Kershaw for the rest of his career, I see myself collecting them (unless he leaves the Dodgers), and nobody else is going to come close.

It took a while for Kershaw to pass Nomo, even as the number of Kershaw cards got really close. There are so many Nomo cards, and soooo many cool Nomo cards, that they were jockeying for the No. 1 spot over the last couple of months until Kershaw's cards pulled ahead.

No doubt, if I was purely a Kershaw collector -- there are so many these days -- I'd own a lot more of his cards. But this is the right pace for me. And I'm happy to say I was there from the beginning, never shunning his cards because he was unproven. I bought in from the start, which is why I own some decent early days Kershaws when few were hoarding his cards.

To celebrate this milestone, I'm going to go through some of the favorite Kershaw cards in my collection. This is going to take three posts (stop whining, I'm doing this for me, not you). I'll start with the Early Days Kershaws in this post, then go with The Middle Years, and then end with Today.

Each "era" will feature 10 cards, although I fudge the limit in this first post.

So here are some notable Early Years Kershaws from my collection: 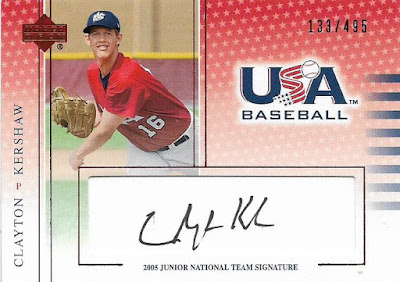 This card was issued probably before I was aware of who Kershaw was. And before he was even drafted by the Dodgers. So, technically, this isn't a Dodgers card. But I don't think any less of it because of that. It's patriotic with a teenagery Kershaw in red, white and blue. I hear parade music when I see this card. (P.S.: This card is going for above $170.00 on COMC). 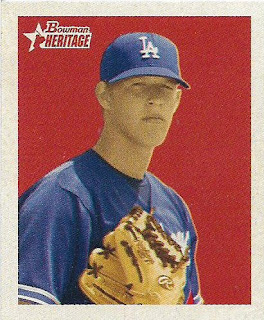 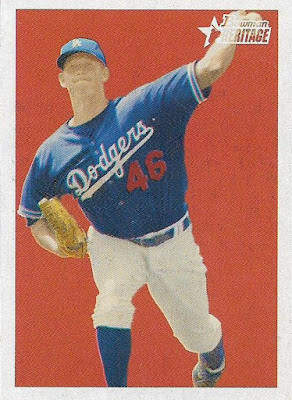 
Rule-fudging already. I'm pairing up these two as one card. This is one of Kershaw's first appearance in a major set. I don't know a lot about '06 Heritage, other than it is a tribute to the '49 Bowman set. I'm guessing that rookies received different images on their mini cards while veterans featured the same image. That No. 46 sure looks odd. 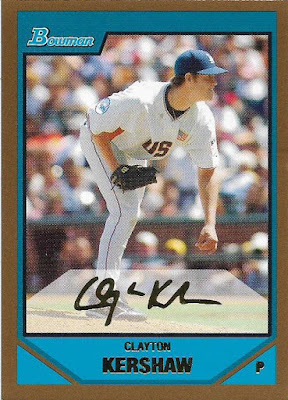 Countless versions of this card, and all of the parallels, have been slabbed and graded, many by owners with visions of big bucks. But this Kershaw gold is hanging out on my desk flapping in the breeze. Normally I'm not a fan of Bowman, its gold cards, or dudes in USA uniforms on my baseball pictures. But Kershaw's wearing a Dodger cap, which makes all of that other stuff go away. 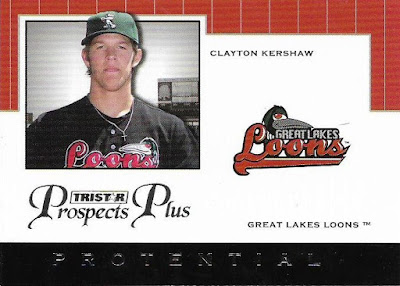 You guys, Clayton Kershaw is a loon! It say so three times on this card. Also, how weird is it to see him wearing green? This card has a high amusement factor. I also dig the cross necklace knowing Kershaw's personality and views. 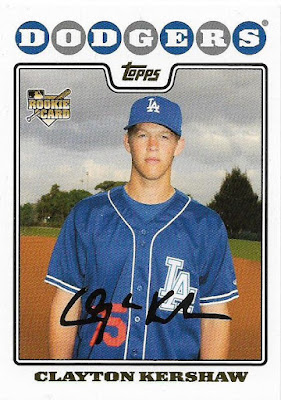 We finally reach Kershaw's "rookie card" a little less than three years after they started making Kershaw cards. There's not much to explain with this card. It's a young prospect just standing there. But every time I see the card I remember the excitement of obtaining what's really his first official card for someone who grew up with Topps. 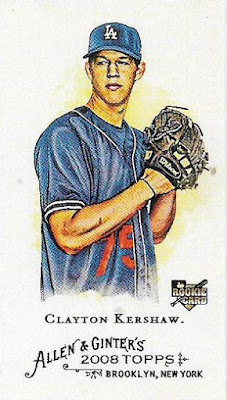 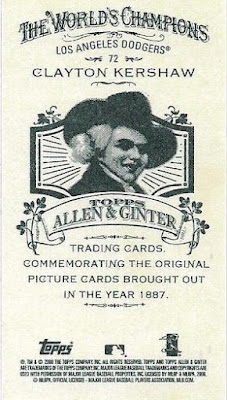 A beautiful and strikingly simple card. The base version is sitting on my blog header. It's Kershaw's first appearance in Allen & Ginter and everything works, even the blue jersey, which most traditional Dodgers fans (I am one) dislike. The Old Planter back, which A&G unwisely ditched several years ago, adds both tradition and quirkiness. 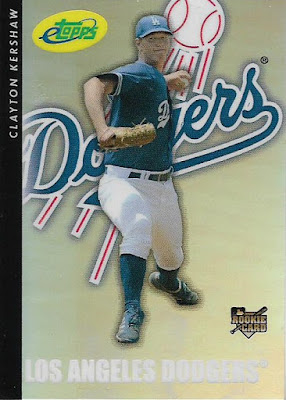 This is the only Etopps card I have ever purchased. That's the type of player Kershaw is. You reserve special or unlikely purchases for him. Many of the Etopps designs are like the Finest designs for me. That's not a bad thing. It means I wish they used these designs for flagship. Flagship would be a lot more exciting if it looked like this. And, yes, I busted this out of its case a long time ago. 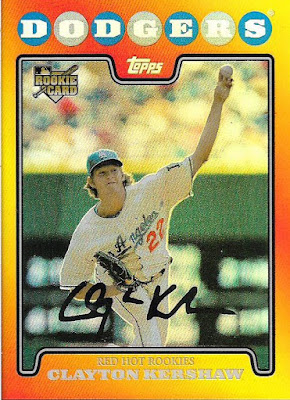 I loved this card the moment I saw it in 2008 or 2009. It was a desirable, action-oriented alternative to Kershaw's base card. And shiny orange. It was rather widely available at the time, too. Now, it's a pain to find. But I don't have to look for it! 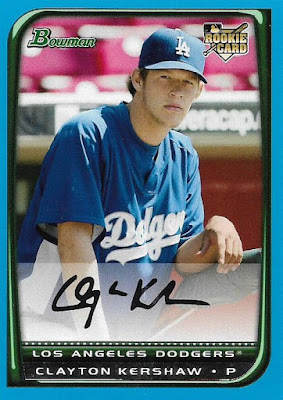 This particular Kershaw pose was everywhere on 2008 cards. It's in Stadium Club, Heritage, multiple Bowman sets and Upper Deck. It's a nice picture, but it gets very repetitive on that many cards. The only way it stands out is with the appropriate blue border (P.S.: this card is very well-centered. I cropped it poorly). 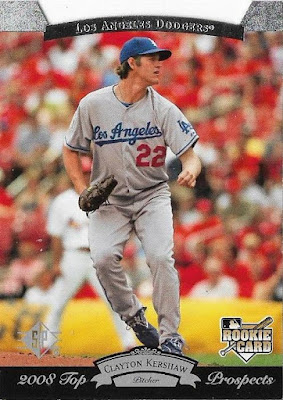 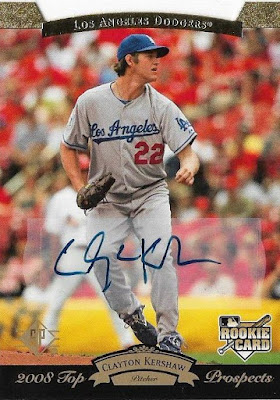 Pairing up two more cards into one. Timeline was a great set to collect despite its frustrating collation. One of the great parts about it was seeing certain players on multiple past designs. The SP design featured my favorite Kershaw photo and UD happened to choose that same design for the autograph card. Yeah, the card is a sticker but try to get a Kershaw autograph card, sticker or no, for a reasonable price today.

While watching the Dodgers play the Cubs on ESPN last night, the broadcasters discussed how in a couple years there is the realistic possibility that people will start lumping Kershaw in with the greatest pitchers of all-time. That's not typical ESPN hype, that's a reasonable assumption and pretty exciting because guys like this don't come along much, particularly on the Dodgers the last few decades.

My goal is to run each of these Kershaw posts all in a row. But if I feel like doing something else, I'll spread them out.

Yeah, I could have found some program and just displayed 465 Kershaw cards all in one shot. But I like words.

mr haverkamp said…
The 2006 Bowman Heritage cards are from a separate 'prospects' set. 100 players got standard size cards, but 25 of those got mini versions with diff photos; Longoria the only one of note besides CK. Fun set to build; just took too long!
June 2, 2016 at 8:02 PM

Play at the Plate said…
You know, I collect USA stuff so if you ever tire of that ugly, boring, non-Dodger Clayton, I'll be happy to take it. But seriously, if you are going to have a bunch of cards, even dupes, of a player, then he's the man for the job.
June 3, 2016 at 11:43 AM

Anonymous said…
I think he already is one of the greatest pitchers of All-Time. 5 straight years of top-3 Cy Young, and the only #3 was last year which has to easily be the best ever 3rd place Cy Young finish (and he would have won the award in the AL). And this year he looks to continue that. I don't think

And his 2 seasons before that are actually underrated - definitely All-Star caliber - now that I look at them.

I don't like your Dodgers - still bitter about them beating out the Reds in 1988 - but I know greatness when I see it and it's unique to be at the very top of the mountain for this long with no down year in between. Most guys who are that good for that long have at least one off year or injury (Pedro or Randy Johnson). The only guys I can think of who could come close to that level with no interruption are Clemens from 86-92 (only 7 years) and Seaver in the 70's. Since WWII at least.
June 3, 2016 at 3:49 PM