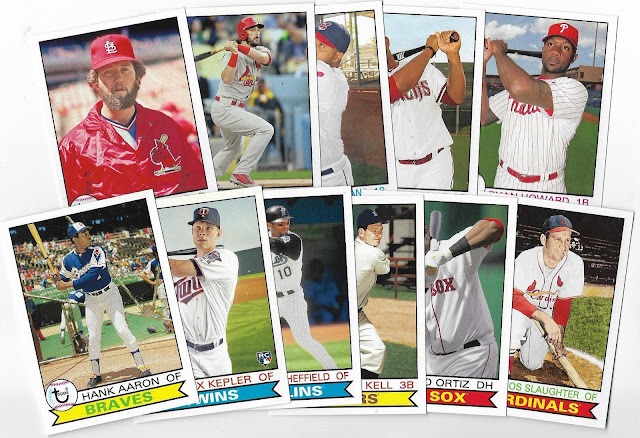 I grabbed another rack pack of Topps Archives a few days ago for the sole purpose of obtaining some more '79s. These are the ones that came out. The old-time legends (Slaughter, Kell) don't do it for me, but ones like Aaron, Kepler and Sheffield are what make this portion of the set shine.

The other cards in the pack were worth a look -- I think Archives has done a finer job duplicating the feel of the respective tributes than past Archives sets have -- but pretty much disposable to me.

Then there was this card: 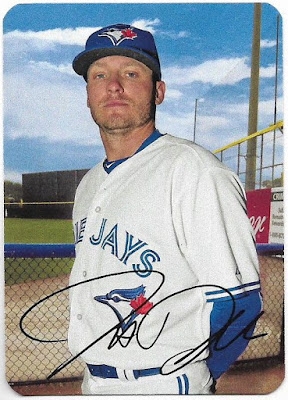 It's one of those 1969 Supers that is an insert in this year's Archives. I know I am belaboring this point and you're all bored with it, but let's turn it over to the back solely to appease my obsession. 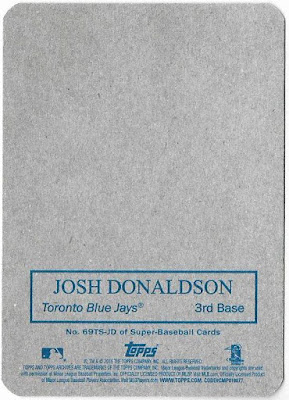 This is the regular "base" version of the insert (no, we're not going to get into how frustrating insert variations are). I know it's the regular base version because I've seen y'all pull these and they all feature the gray cardboard and the blue writing.

Now let's return to the first '69 Super I pulled on my first '16 Archives post. 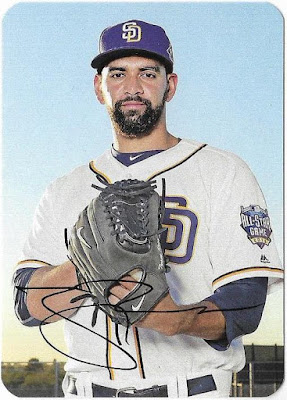 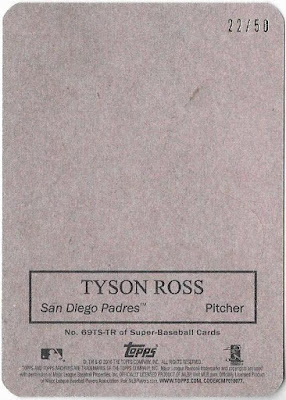 This one is numbered 22/50 on the back and the writing is black.

I don't see any red.

I don't think my idea of what is a "red back" and what is not a "red back" is off either. At least one other blogger either assumes or knows that the "red backs" feature red writing.

But where is the red writing?

Ryan Cracknell, former card blogger extraordinaire and now working for Beckett, wondered smartly whether the card stock of my Ross card, numbered to 50, features a redish tint, perhaps justifying the "red back" description.

I compared the base card and numbered to 50 card side-by-side: 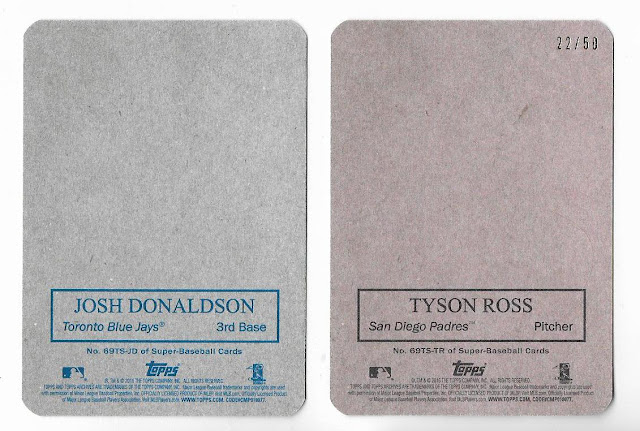 You can obviously see a difference. And, in a world in which you're calling one card "red" and one card "not red" and there are no other choices, then, yes, I guess the Ross card back would be "red." It would also be "brown" (a more accurate description as far as I'm concerned), "tan," "cedar," "brick," "wood," "mocha," "brunette," and "clay."

There is a color called "red brown." Even that's a stretch, but at least it was nice looking at the models.

I am going to assume that the Ross card is the "red back" because nothing else is pointing me in a different direction, except for the fact that IT IS NOT RED.

This, of course, would all be taken care of by Topps, and other card companies, with the issuing of visual guidelines when they release sets. They may feel it is not necessary, that it somehow "adds to the fun" of figuring out what's in a set (more likely it adds to the fun for Topps of watching collectors stagger around trying to determine what they have). But when you are issuing sets that contain variations upon variations and inserts upon inserts and parallels upon parallels, some sort of map should be required.

Yes, I know I have a color hang-up. It's well-established.

Everyone else should, too.

The Lost Collector said…
Wow, very odd. I'm sure many of these have gotten overlooked. That is definitely not red. Why not make the writing on the back red? Or the signature on the front red?
June 12, 2016 at 5:05 PM

Anonymous said…
If Topps wants to play their cards close to their vest (so to speak) in order to make things "fun" for certain kinds of collectors who like to discover things... OK, fine. I'm more or less OK with that.

Anonymous said…
Weird on the tint. I think that's it, because I looked at a couple 1/1 ("black backs") on eBay, and those look to me to clearly have more of a black tint on the back. With black writing.

I agree, though, that's really silly. A rare(r) variation should have something extra cool about, something differentiating. Not just a different color where you need to be a detective to figure out what the difference is.

Honestly, I just wrote red back in my post because that's what baseballcardpedia and the back of the pack said.
June 12, 2016 at 6:01 PM

Laurens said…
Maybe the sell sheet info from Topps is wrong - presumably the reds are the harder to pull cards while the black cards are the more com on serial #'d to 50 variation.
June 12, 2016 at 6:05 PM

Jeremya1um said…
I would've never known the difference if you wouldn't have figured it out and posted it. When will Topps quit making (mostly) gimmicky crap and start listening to what the majority of collectors want?
June 12, 2016 at 9:57 PM

Billy Kingsley said…
I can't help but wonder if they originally planned the SN50 to be red, but later changed to green...but not until after the packaging and advertising was printed. I have not seen any of these in hand, but from the scan it looks more green than black to me.
June 13, 2016 at 2:48 AM

CaptKirk42 said…
I don't like the having to research what the variants are either. It don't look "red" to me. OK yeah now with the side by side I can see. It reminds me of that line from Princess Bride, "you keep using that word, I don't think it means what you think it means". It also reminds me of the early 90s years when Topps "gold" variants were only gold because of the gold leaf/foil lettering instead of silver foil. As we collectors get older that foil crap gets harder to read. And this thousands of variants and parallel sets is no better than the "Junk Wax Years". For those who don't like that term excuse me it is the "overproduced" years.
June 14, 2016 at 1:37 PM