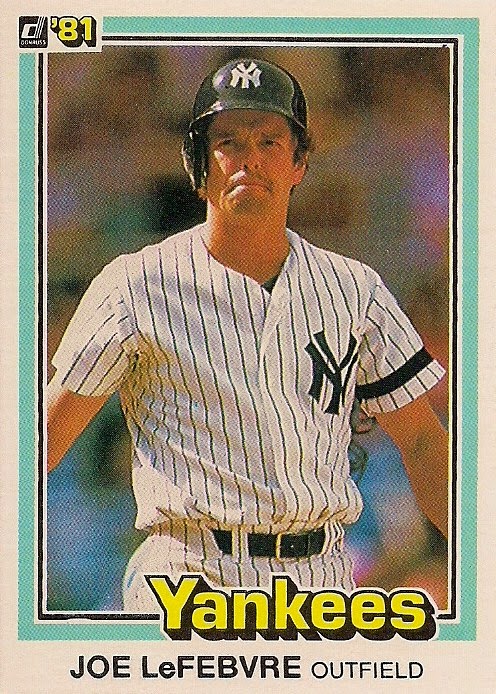 Since I am just a few cards away from finishing off the 1975 Topps minis and the 1972 Topps set must wait until I have cash to throw at high numbers, I need a set-collecting project that I can pursue at a leisurely pace, that won't strain the budget, and that fellow collectors are willing/able to send.

This is endlessly amusing to my 15-year-old self, because when the first Donruss set came out that year, it was as if I was buying homemade cards. I can hear myself snorting all the way from 1981.

By '81, I had collected Topps and basically nothing but Topps for seven years. Topps was as professional as you could be when it came to card collecting. They knew what they were doing. And their product -- for its time -- was high quality. A large set with adequate photographs, complete stats and an attractive design. No one could do what they did.

So when Donruss and Fleer offered sets in 1981, we opened our very first packs and smirked. These sets didn't come anywhere near Topps! Misspellings? Typos? Ugly designs and weird poses?

I gave Fleer a bit of a pass probably because of the card stock. At least Fleer's cards felt like Topps cards.

But Donruss? I couldn't get over the cards. They were thin. Flimsy. Some cards featured ragged edges. Some of the photos were dark or blurry. It was probably my first time looking at white card stock (save for some Hostess cards). I wasn't impressed. I noticed the cards got dirty quickly.

Some of my initial thoughts on this set I had forgotten until I received a healthy stack of '81 Donruss wants from Zach at Autographed Cards. He's the most avid '81 Donruss collectors I know and has featured a number of signed Donruss cards on his blog.

It was in shuffling through the cards that he sent that the initial rush of impressions of that first Donruss set came back to me for the first time since 1981: 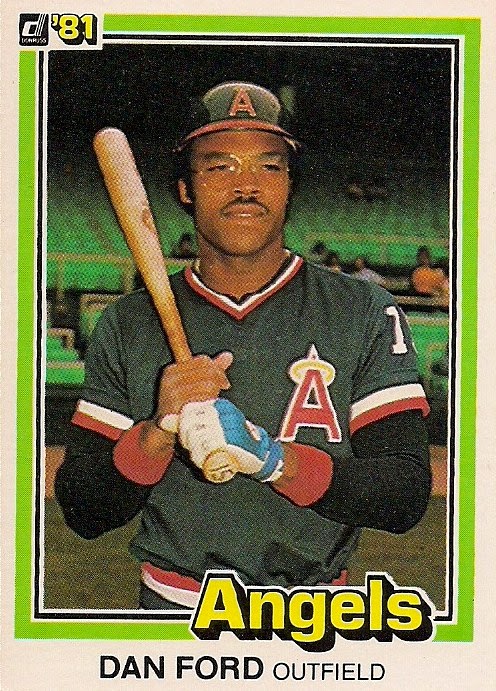 First, as everyone probably knows, the majority of the photos -- I would say at least two-thirds -- were taken in Chicago.

The American League teams were photographed in old Comiskey Park. 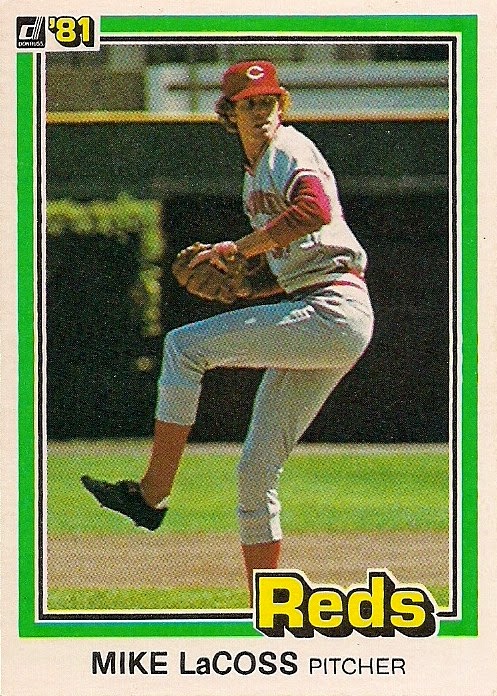 And the National League teams were pictured at Wrigley Field. 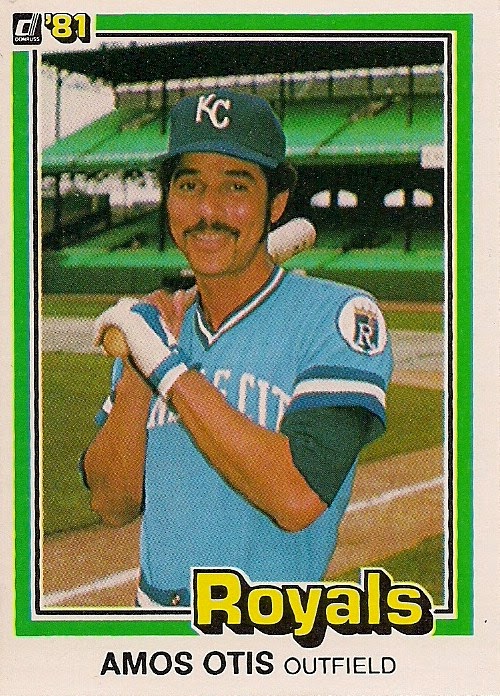 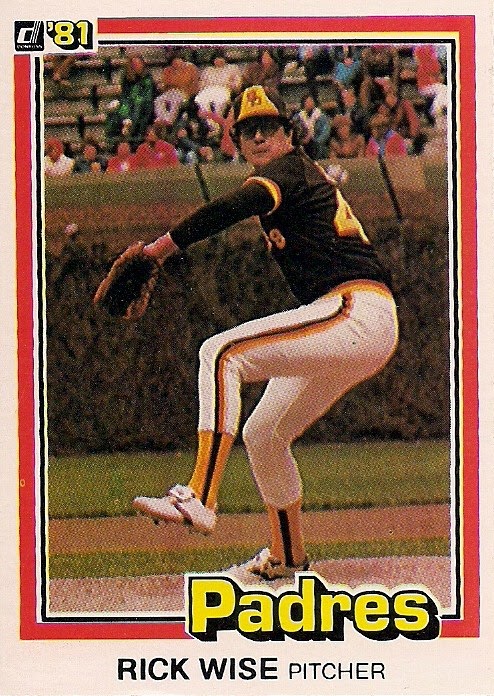 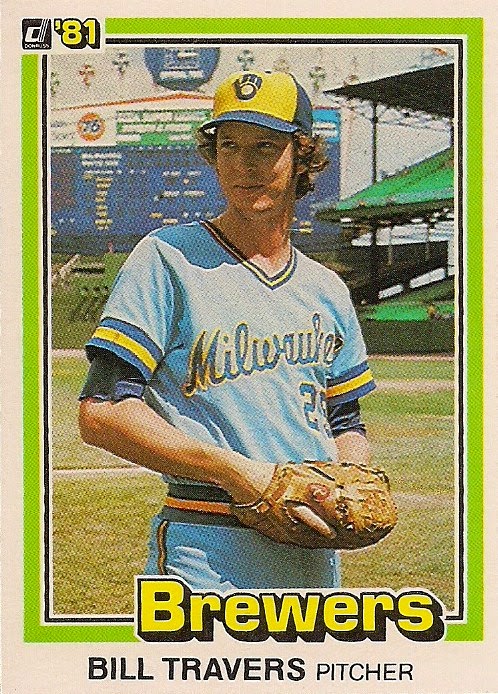 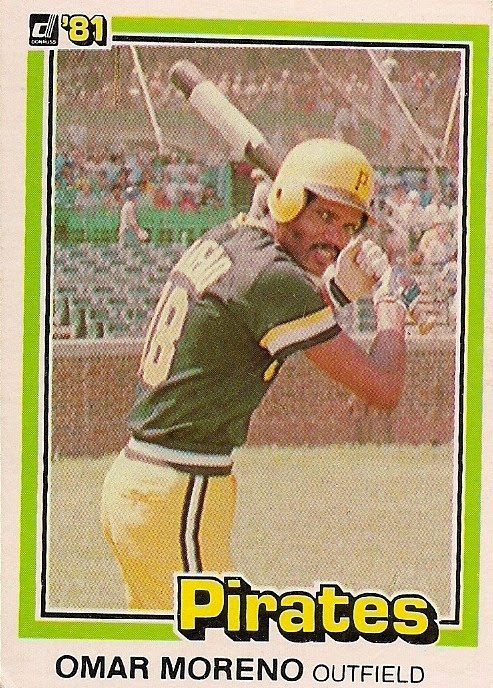 I could continue this for the next hour, but I think you get the idea.

Another photo feature of '81 Donruss is it has to hold the record for the most photos showing a player with a bat on their shoulder. 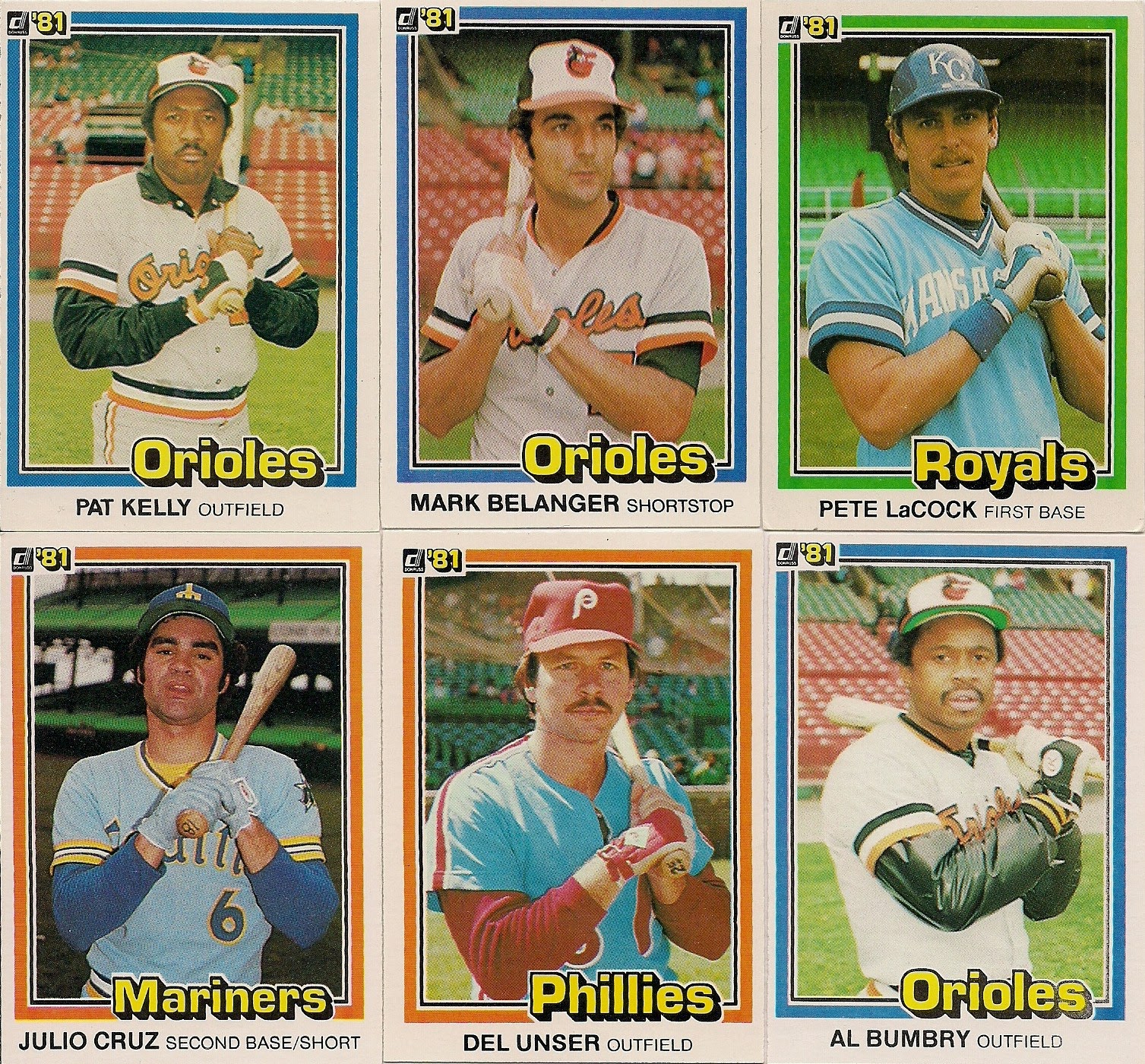 Again, I could do this for the next hour.

1981 Donruss endured a number of quality control issues. Sure there were errors, although somewhat overshadowed by the cavalcade of errors in 1981 Fleer. But the ones I noticed most were in terms of card production.

For example, this card: 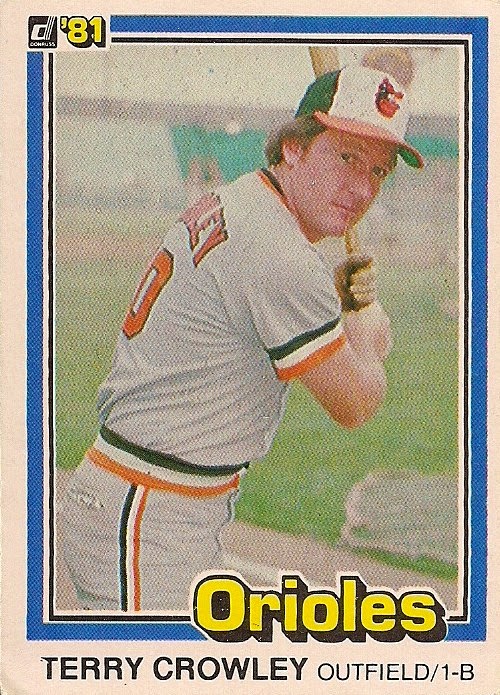 This card that Zach sent looks totally abnormal to me. I don't recognize this card. Because the Terry Crowley card I pulled out of a pack of 1981 Donruss looked like this: 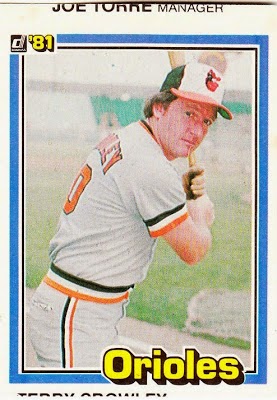 (By the way, I mentioned this card and all of the other issues with '81 Donruss back on this post. So, yes, I'm running out of material).

One of the other '81 Donruss issues is miscut cards. For some reason, the Pirates cards I received illustrate this best: 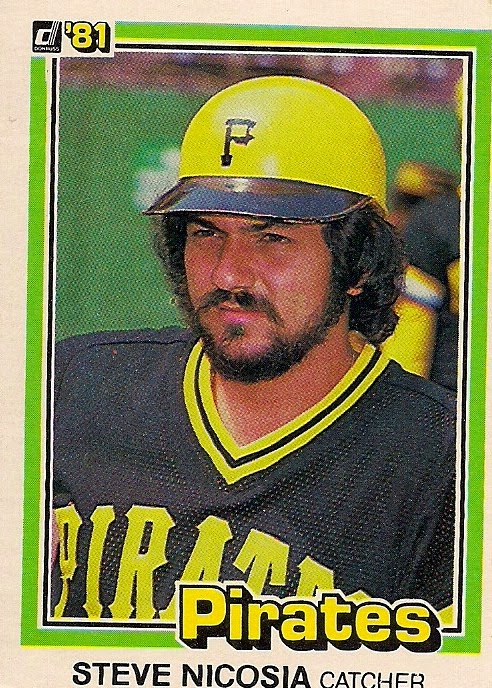 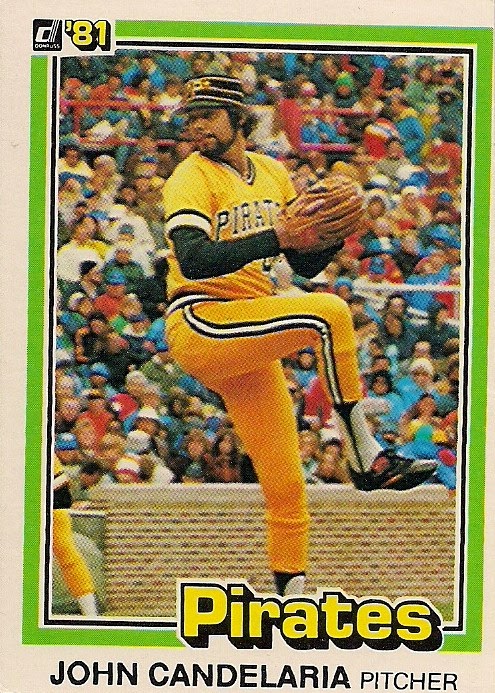 At least all of the YELLOW distracts you from the crookedness.

A problem that I noticed with '81 Donruss right away when opening packs were frayed edges, almost like the same thing you would see with O-Pee-Chee cards back then. 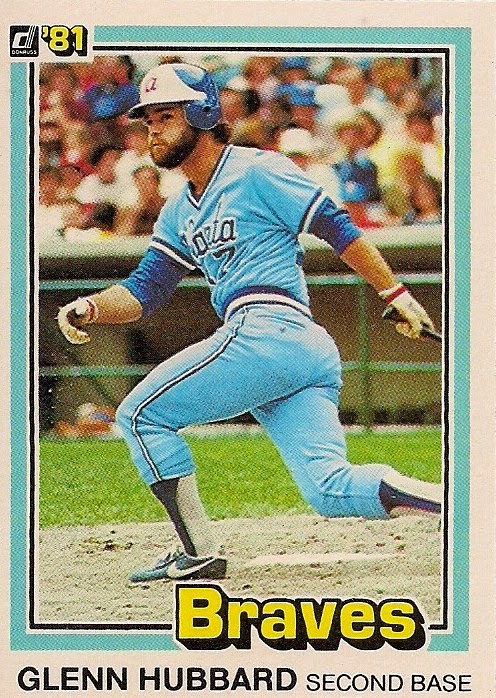 I cropped off the frayed edge on this Glenn Hubbard card, but I'll give you a closer look at the bottom edge of the card.

It might be difficult to see, but the edge as ragged as my job these days.

Also, the Hubbard card gives me a chance to show one of the blatant cases of inconsistency in 1981 Donruss. 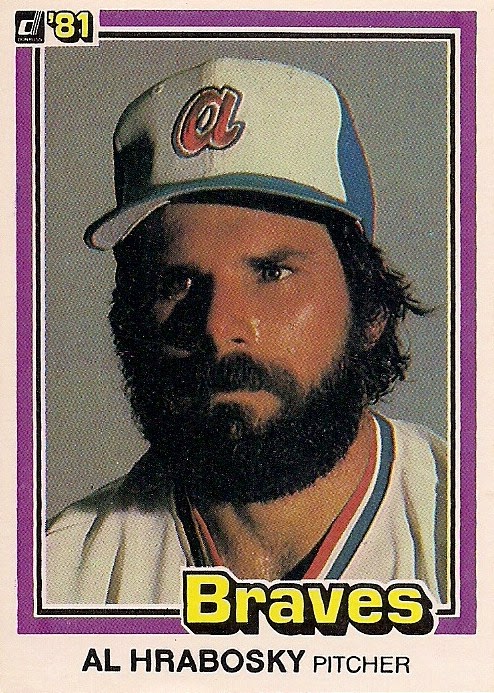 All of the Braves Donruss cards (or at least all of the ones I have) feature light blue borders. But Hrabosky has a purple border. The Mad Hungarian doesn't seem too pleased about it either. 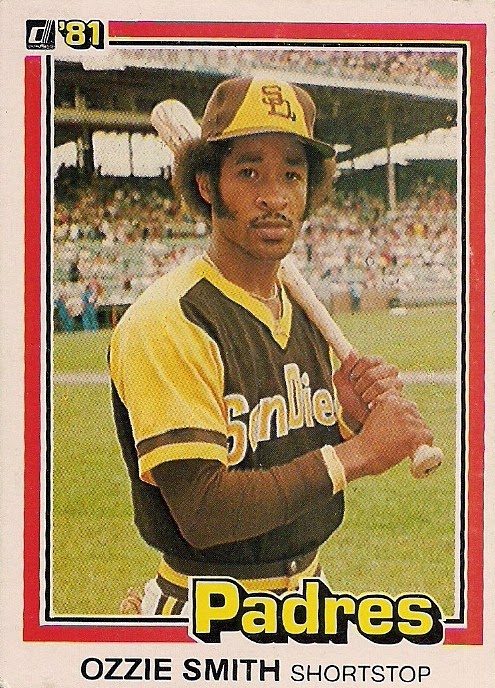 Zach told me that I originally sent this card to him so he could get it signed. But he sent it back because he wasn't able to snag Ozzie.

The card is interesting to me because it's the first card in the first Donruss set.

In fact, the first four cards in 1981 Donruss are Padres. I don't know why that is. San Diego finished dead last in 1980. They had a habit of doing that then (and still do). Ozzie had kind of broken out in the field, but he was still just a .230 hitter at the time. I wonder if Don or Russ was a Padres fan?

The team distribution in '81 Donruss is interesting in general. Teams aren't evenly interspersed through the set like Topps and aren't grouped together like Fleer. Instead there is a clump of four players from the same team here and a clump of three players from another team after that. I'm looking forward to seeing this set in a binder just because of that oddity. 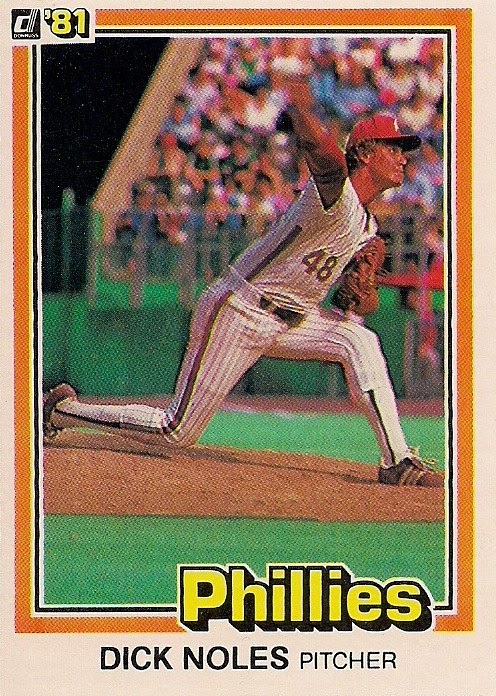 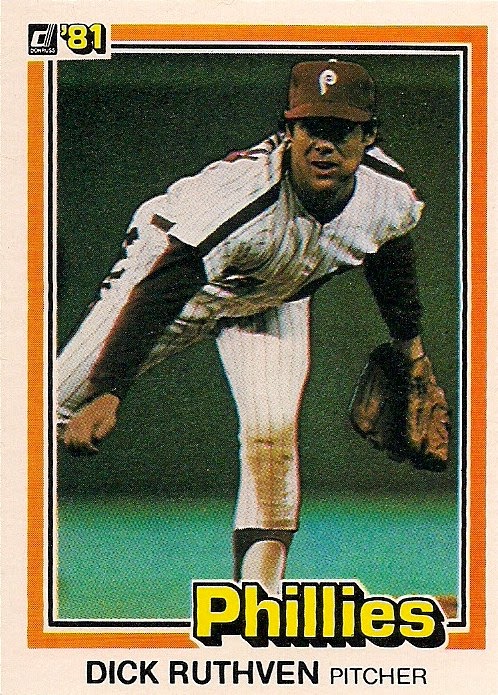 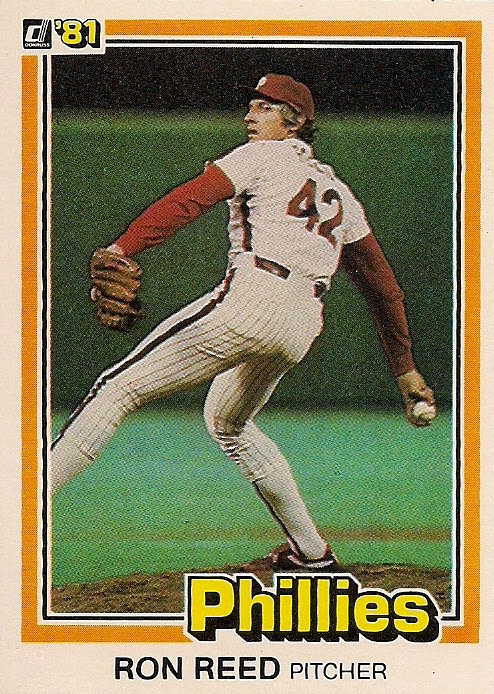 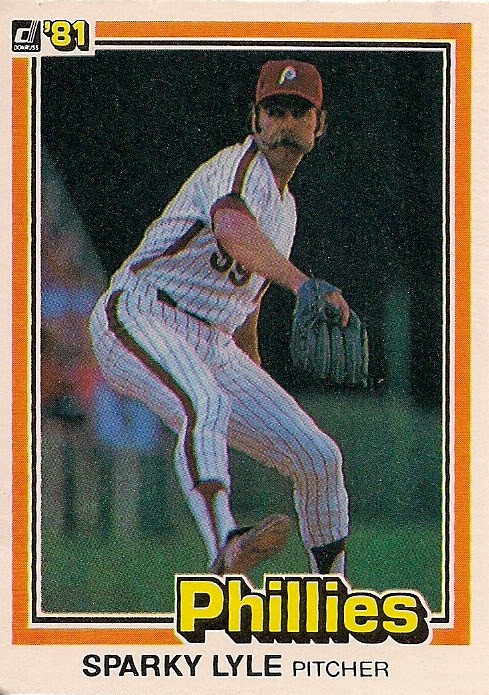 The Phillies come out looking pretty good this set -- I guess that's what happens when you win the World Series the year before. 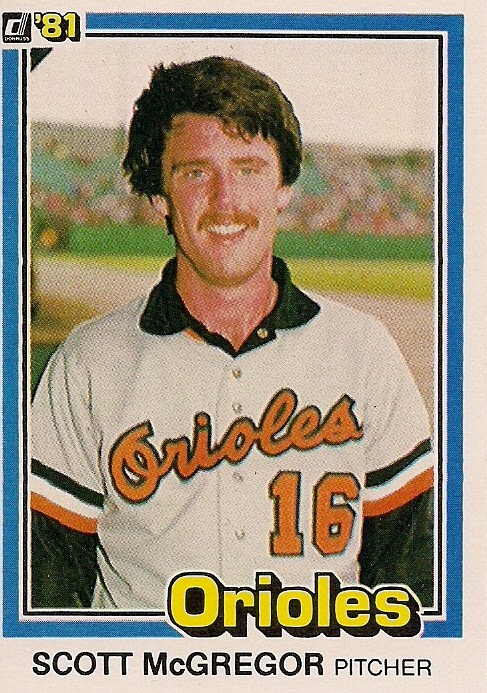 Not everyone was so lucky. 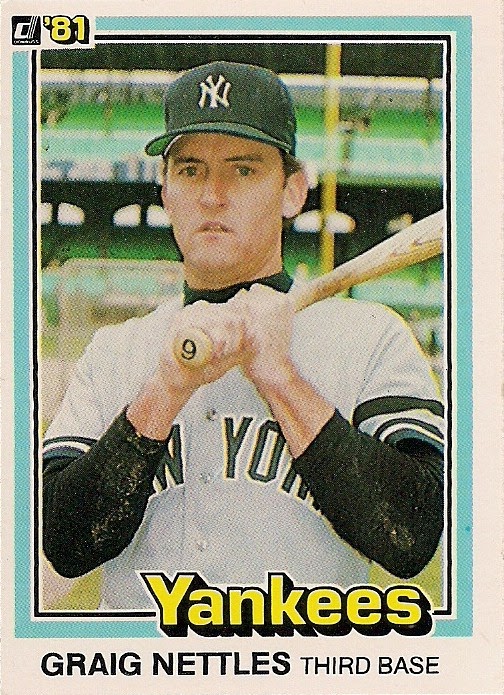 I actually received a handful of '81 Donruss from Jeff at One Man's Junk (Wax), too. Both Zach and Jeff sent me the Graig Nettles card (as well as Sparky Lyle).

I never noticed the stuff on Nettles' sleeves until scanning this card. It looks like he slid head-first on a dugout floor that was littered with sunflower seeds. 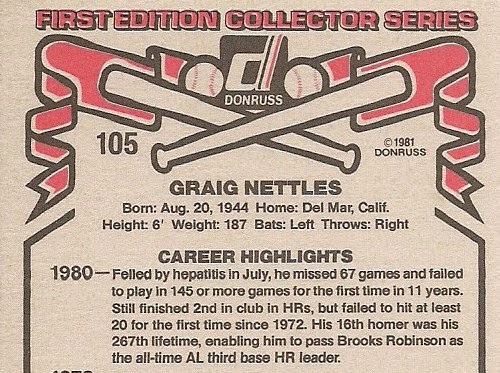 Here is part of the back, which may be the only time that hepatitis is mentioned on the back of a baseball card.

Also, please note that this set is a "First Edition Collector Series".

That's probably one of the reasons why I am trying to complete this set now, along with the quirky, homemade feel of it. It's always good to recognize a first effort. And that's what this set was: a first effort.

Donruss would improve its quality in subsequent years, depending on your perspective of '91 Donruss, of course. But as far as '81 Donruss goes, I'll stick with what I said in 1981:

JediJeff said…
Not sure where the Orioles are, but definitely not at Comiskey. Maybe Milwaukee?
September 19, 2014 at 9:26 PM

Don said…
Definitely Milwaukee. Just wait, you will notice a lack of Tigers in the second half of the set. The teams do follow a definite patent. I remember seeing something about it a few years ago, but I don't remember where I saw it.
September 19, 2014 at 10:19 PM

hiflew said…
One of the major things I would have changed about the front is swapping the border color with the team name color. I think the sameness of the team names is what I never liked about this set.
September 19, 2014 at 11:43 PM

Daniel Wilson said…
Great post! I love reading about older sets and learning some things!
September 20, 2014 at 12:41 AM

Fuji said…
I'm glad The Mad Hungarian made an appearance in this post. One of my first baseball card memories was sitting around with my neighborhood buddies trading cards and the 1981 Donruss Hrabosky was definitely a favorite. I think it was a combination of the beard and the fact that we thought the purple border was a rare error card. Great memories.
September 20, 2014 at 10:27 AM

The Junior Junkie said…
'84 Donruss will always be a mystery, as will the shape of Scott McGregor's head.