10 from the glory years 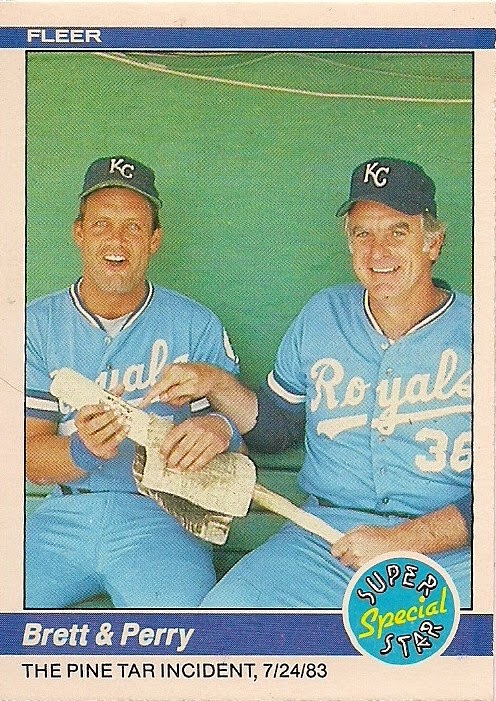 I'm writing this late because I fell into the trigonometry trap left by my daughter. Never again.

So, as I write, the Royals are leading the A's 3-2, but that could all change and everything that I write from here on out may be obsolete in an hour or two.

Oh, well. How often do I get to write about the Royals?

The best thing about Kansas City playing a playoff game is it evokes memories of what I call my first collecting era. That era runs basically from the mid-1970s to the mid-1980s. Or, in other words, the same period of time that the Royals were winning playoff games and playing in the World Series.

My glory card years were their glory years period.

So I wanted to show some Royals card favorites from that period -- I kept it to 1976-85 since that is when K.C. began and ended its postseason run -- in recognition of this feat from what has always been one of my favorite teams.

The trouble is, I've actually shown a lot of Royals cards from this time period already. And I don't want show them again. So, you won't see any Hal McRae cards here. You won't see Cesar Geronimo's magnificent mustache or the Dan Quisenberry card that makes me think of my ex-girlfriend. You won't see 1978 All-Star George Brett or 1980 All-Star Frank White.

But, don't worry, I got you covered. I have a lot of cards.

So, here are 10 from those glory years. That I haven't shown before. I think: 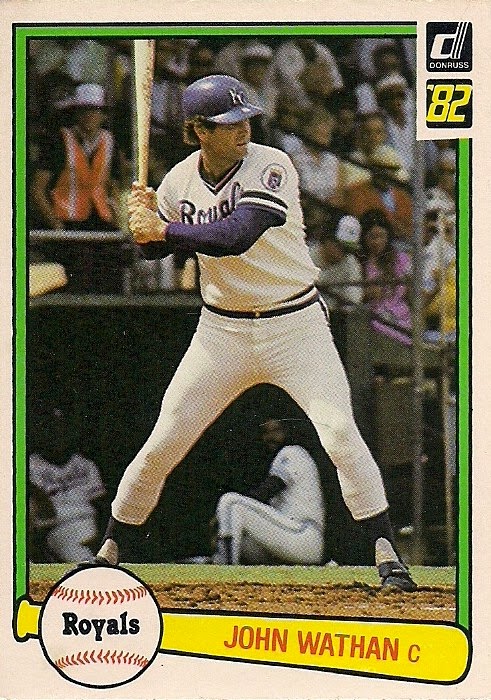 Now that I've scanned the card, I can see lots of interesting activity in the stands. But, by far, the best part is how awed the Royals player -- Willie Wilson, maybe? -- appears to be by Wathan. Wilson is a gargantuan beast as Wilson cowers in fear. 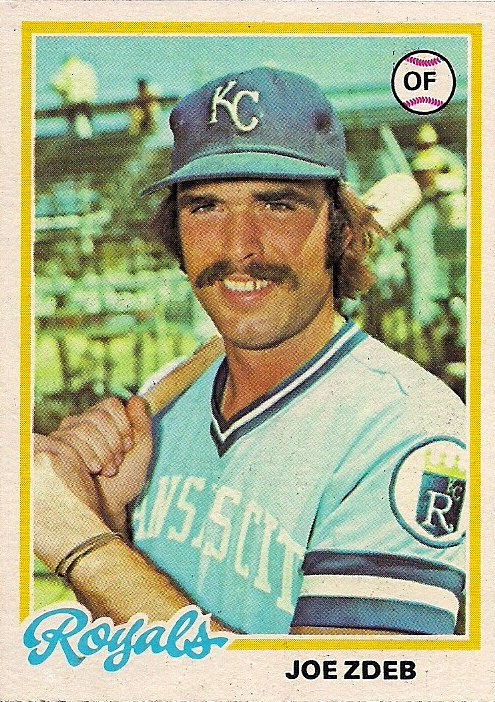 Before Sports Illustrated unleashed Sid Finch and Topps issued the Kazuo Uzuki card, my brother and I thought this was the first prank of the non-existent ballplayer. Zdeb? Zzzzz-DEB? What is that name? That's not real! It turned out the "d" is silent and we spat all over each other for nothing. And we were relieved when the 1979 Topps set came out and Zdeb was there again. I've always liked real people on my baseball cards. 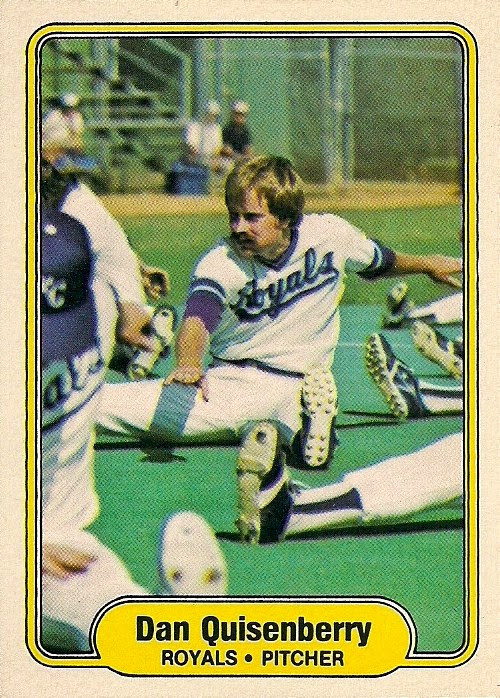 A spectacular card and possibly the first ever to feature mass calisthenics. By now we knew that Fleer was on to something strange and wonderful. 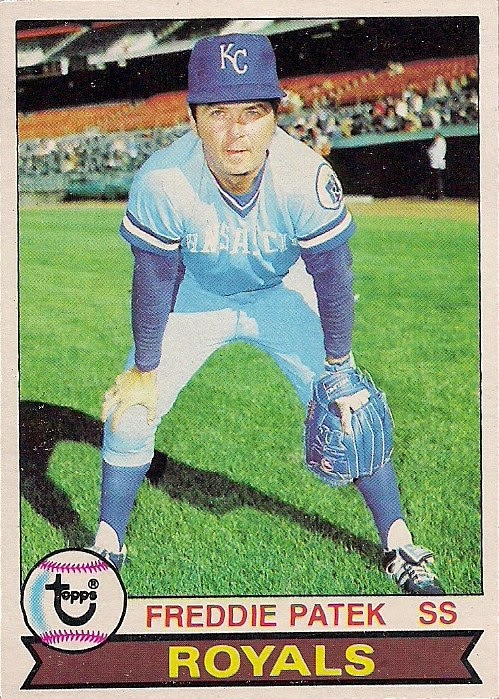 I was blissfully unaware of the height of ballplayers when I was a kid. Tall guys looked short on baseball cards. Short guys looked tall. But I knew Freddie Patek's height. You don't play baseball at 5-foot-4 and keep it quiet. And if you're 5-foot-4, then the blue glove you're wearing definitely looks like a toy. 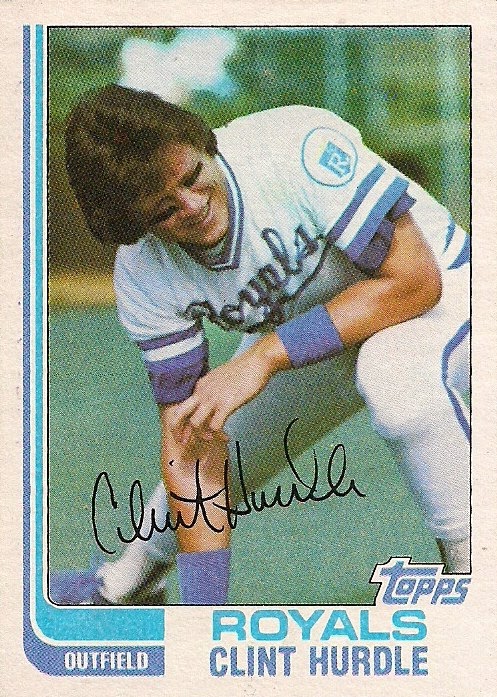 MORE exercise? 1982 happened to be the same year that Jane Fonda released her first workout video. I smell cross-promotion. This card also somewhat answered my question of what Dorothy Hamill would look like in eye black. 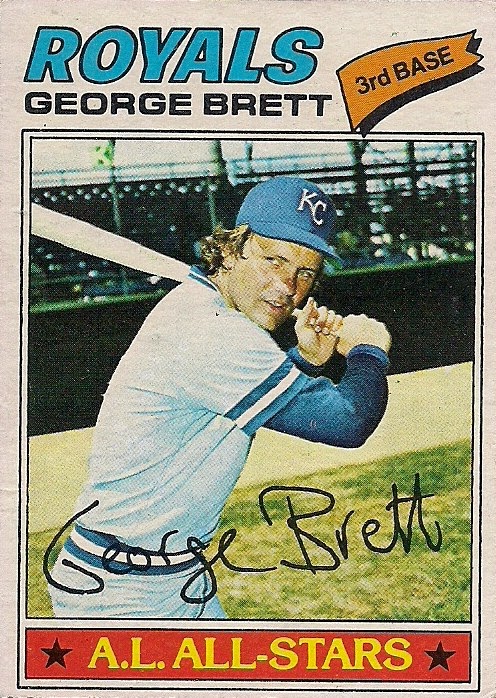 What this card meant to my sixth-grade class I can't even describe to you. Brett was a god at this time. A young, virile sensation. It pains me now to see some younger folks laugh at his outspoken behavior -- particular the famed pooping incident. I wish I had that kind of presence and ability to be able to broadcast my bathroom mistakes to the world without any hesitation. Let's see Mike Trout do that. 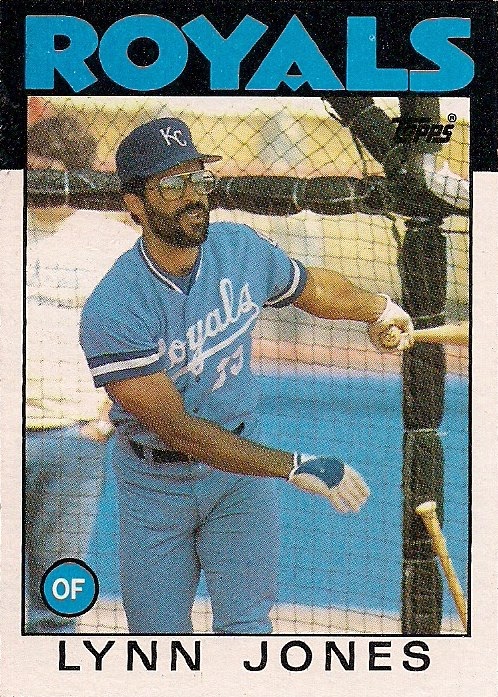 This is what would happen if your chemistry teacher somehow got lost in a batting cage. 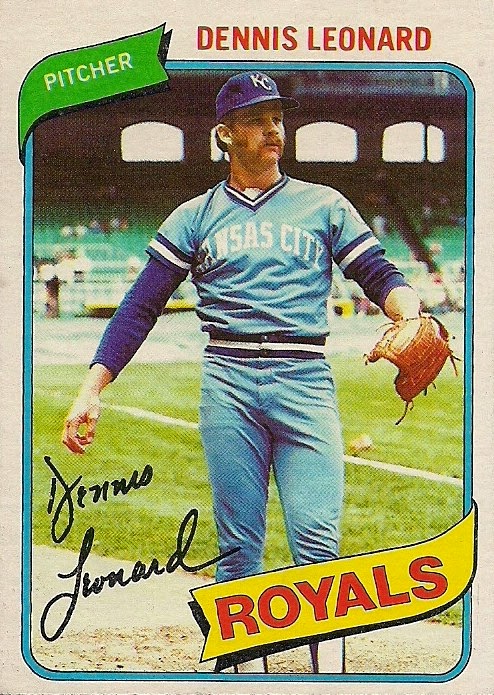 I have wondered what Leonard is doing on this card ever since 1980. He has to be mocking someone, right? Please say he is. A fan probably. An umpire would be most awesome. Or maybe his coach. Leonard is the first pitcher I ever saw win a game in person. He beat the Yankees. So he automatically rules. I say he's mocking the Yankees. Fat asses. 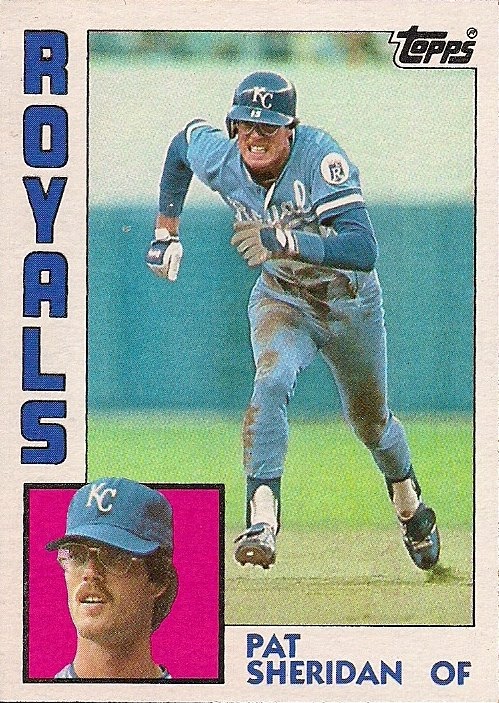 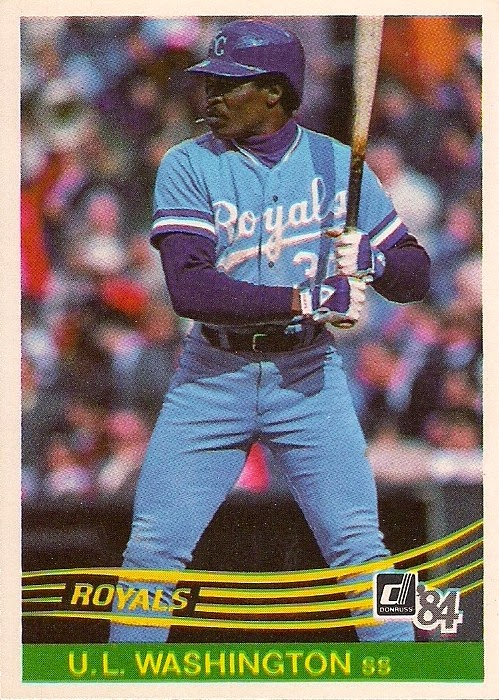 There are a lot of memorable characters in the Royals' relatively brief history. It's one of the reasons why they've always been one of the teams I've rooted for when I'm not rooting for the Dodgers. But U.L. Washington might be the best character. The fact that he always displayed a toothpick was endlessly fascinating to us, no matter how often it was mentioned. And this is one of the few cards where you can see that toothpick in his mouth WHILE HE'S PLAYING.

Those are just a few of my favorites from that era. Trust me, there are many others.

But I probably should watch the rest of this game instead of trying to peak views of it in between words.

The Royals are now trailing 5-3.

Nick said…
That '82 Fleer Quisenberry is one of the best cards ever. Didn't even know it existed until I saw it on your blog right after I started blogging two-plus years ago.
September 30, 2014 at 10:27 PM

JediJeff said…
With aluminum foil (foil)
Never settle for less
That kind of wrap is just the best
To keep your sandwich nice and fresh
September 30, 2014 at 10:55 PM

BobWalkthePlank said…
I wish Clint Hurdle would have kept that haircut.
October 1, 2014 at 7:55 AM

Tony L. said…
Pat Sheridan was a hipster god to our high school baseball team my freshman year after a teammate heard a TV commentator call Sheridan "Tall and lanky with considerable speed." That commentator failed to mention that Sheridan was Weird Al Yankovic's body double for the "Like a Surgeon" video.

arpsmith said…
I loved UL and his toothpick as a kid growing up. We had all kinds of conversations on how it could impact the game - the ball could hit it just right and be a mini spear an a throw to first, what would happen if he swallowed it running around the bases, etc. With the Giants being so terrible during the Royals peak years, they were one of my favorites to cheer for in the playoffs.
October 1, 2014 at 1:24 PM

deal said…
UL Washington and his toothpick were a topic of discussion on Philly sports radio for a couple of minutes y-day. Pretty significant press for a mid-star from 3 decades ago for an otherwise provincial broadcast.
October 1, 2014 at 8:40 PM

Josh D. said…
How exactly does one fall into a trigonometry trap? Did she bait it with the arctangent?
October 1, 2014 at 10:21 PM

Fuji said…
There are tons of awesome cards featuring Quisenberry and his submarine pitching delivery... yet you chose the card picturing him doing calisthenics. It's for this reason... and this reason alone that I tip my cap to you and repeat over and over... I'm not worthy... I'm not worthy. Great post.
October 1, 2014 at 10:25 PM