How the world has changed, wrapper edition 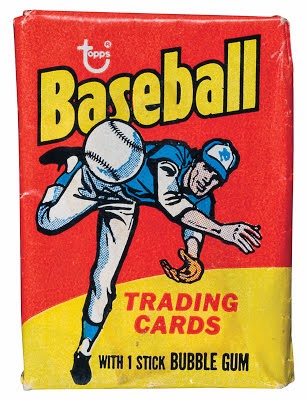 Someone brought up the other day about how baseball card wrappers used to feature the ingredients for your stick of bubble gum.

I dug out an example from my favorite set of all-time, 1975 Topps.

Here is that nutritional information:

For all I know some of the things listed there have been banned because of multiple lawsuits. I do know that BHT (butylated hydroxytoluene) is bad news.

Instead it gives you this:

Besides, nobody thought of "odds" when opening cards then. We weren't at the race track playing the ponies, we were pulling cards. We hoped to get lucky, but we didn't have anything riding on it, so we didn't need odds.

If today's wrappers don't show that this hobby is exactly the same as gambling for some collectors, I don't know what does other than watching certain box breaks.

Can you imagine a wrapper in '75 that said "Topps does not, in any manner, make any representations as to whether its cards will attain any future value."

"Future value?" we'd ask, as we whipped another card at the wall.

The wrapper for 1975 Topps featured some other writing on it:

I've addressed this before. I don't remember hearing about the Topps Sports Club and obviously never joined it. If there was one now, I think I might sign up.

But you don't get cool stuff like this on wrappers anymore. No "send in for special giant sized Diamond Kings" or anything.

Even on throw-back sets like Heritage, which including gum in packs until 2011 to evoke that old timey feeling, there is none of that frivolity on the pack. 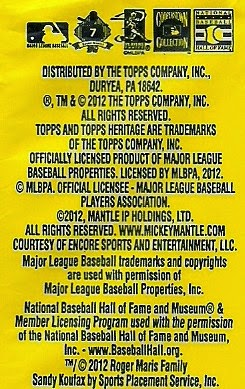 Topps has all its bases covered right there on the wrapper.

And instead of knowing what you're putting in your mouth (sort of), like you knew in '75, now all you know is who is getting paid.

Anonymous said…
My goodness, can you imagine the furor if the 6 o'clock news lead off with "Your children may be ingesting butylated hydroxytoluene on a regular basis" ?

Matt Runyon said…
My dad signed me up for the Topps sports club in 1975. I remember getting a 5x7 picture of Steve Garvey for the baseball part. It was the only time I had a Dodger on my bedroom wall.
September 6, 2014 at 10:33 AM

The Lost Collector said…
I think as recent as the early 90s there was still "Win a trip to spring training" type offers. I can't remember anything like that post 2000.
September 6, 2014 at 11:51 AM

View From the Skybox said…
You don't have to look at a wrapper to know the only one really getting paid is Topps.
September 6, 2014 at 3:29 PM

Fuji said…
The Topps Sports Card Club sounds awesome! $2.50 for autographed pictures, posters, patches, preseason samples, a newsletter, and much, much, more? I'd be all over that. Let's hope someone over at Topps reads your blog and gets this started. Even if membership was $20 to $30... I'd consider joining.
September 7, 2014 at 9:06 AM