Where it all went wrong 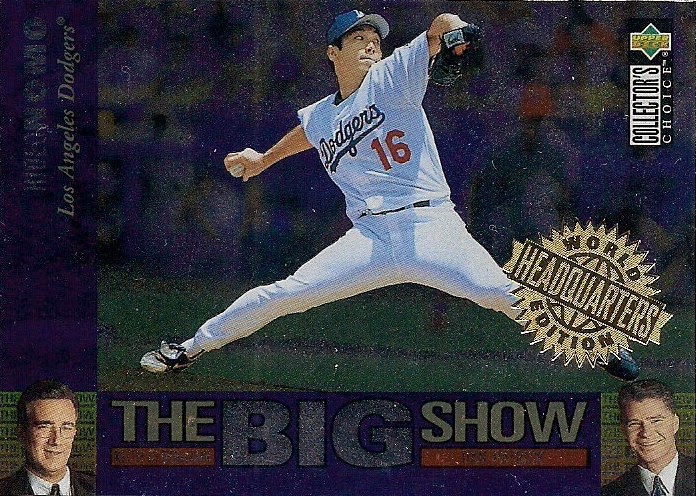 Living in your 40s isn't as bad as younger folks think. As much as I thought, back when I was a teenager, how ancient I would be when I reached 40 many millenniums into the future, you spend a lot of time in your 40s marveling over how young you still are.

Unfortunately, you spend the other portion moping over how old you are.

The reminders are everywhere. It's not only your own body -- which keeps breaking down in ever surprising new ways and requires constant attention the likes of which you had never dreamed -- but it's everything around you. From the TV shows, to the advertisements, to the clothes to the gadgets to the activities to the music to the attitudes and opinions on every issue available, all of it shouts: YOU'RE NOT YOUNG ANYMORE.

It's almost hurtful. But us folks in our 40s have a way of coping with this.

Boy do I ever get nostalgic. Half the time this blog is an ode to everything that I enjoyed in the 1970s and 1980s. And there are times when I slip into the very 40s habit of saying "(fill in the blank) was so much better when I was a kid."

But I'm not nearly as desperate as some other people I know that are my age. All I have to do is hop onto Facebook to see that. Every day there is a post from someone flashing a picture of a toy from the '70s that says "LIKE if you remember this!!!!" Implicit in this exclamation is that the shown item could beat the piss out of whatever goofy gadget kids play with today.

It's an easy trap to fall into for us 40-somethings.

In fact, I did a very 40s thing when I saw this card that I received from Chris at Nachos Grande. He even helped me along with a note that said "The Nomo is a 1-per-box parallel of the regular 'The Big Show' inserts. Parallels of inserts are stupid.'"

"Hey wait ... Parallels of inserts ARE stupid. All this is the same card with a STUPID STAMP on it! What the hell does 'World Headquarters' mean anyway? This thing IS stupid. Stupid stamp on stupid parallel. Why, back in my day, we didn't need parallels. Hell, we didn't even need inserts. We had subsets, and that was good enough for us. You know what? Sometimes we didn't even like the subsets. Because they interrupted the run of base cards in the set. Because all we wanted was the base cards. That's right, just the base cards. Base cards were cool in the 70s! You know what else was cool in the '70s? Long hair and mustaches. They RULED in the '70s! Every older dude -- who was COOL -- had long hair and a mustache. And you know what? Girls dug guys with long hair and mustaches. You couldn't GET the hot girl unless you had long hair and a mustache. But I can't grow a long hair and a mustache today because nobody likes them anymore, including a lot of the hot girls, one of which happens to be my wife. Even some of those Fisher Price people had mustaches. They were the coolest toy people ever -- man, it was so much cooler in the '70s."

It is very easy to set someone in their 40s off.

But I still wasn't done viewing this card and lamenting youth lost.

To me -- in that very perturbed state -- this card represents exactly where everything went wrong.

In 1997, Nomomania was in its final stages. Never again -- with the exception of Ichiro Suzuki -- would a Japanese player be as much of a sensation as Hideo Nomo. 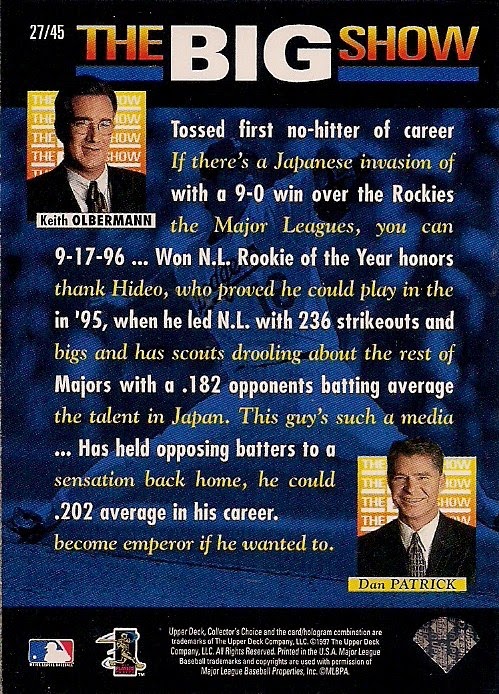 Also in 1997, Keith Olbermann left ESPN. The Keith and Dan SportsCenter show, which in the early '90s was the height of sharp, witty, informative sports broadcasting, disappeared and could never be reassembled, even though attempts were made. Olbermann and even Patrick to a certain extent would let their egos blow up and I can't look at either of them the way I did in 1997. This is also the time where I can point to the beginning of my dissatisfaction with ESPN, which has blossomed into me outright ignoring the network.

And, of course, a parallel of an insert -- in its infancy in 1997 -- would morph into the disaster in collecting that we have today.

But there I go again giving today's world my 40-year-old stink-eye.

I admit I don't have a lot of interest in today's mojo collecting habits. I don't follow the NBA on ESPN. And my interest in the hottest rookie from the most exotic country only peaks when the player is wearing a Dodgers uniform.

But I guess I'm not supposed to care about what the masses like anymore.

I was one of those kids who played with the farm house that when you opened the door, it made a mooing sound. It was the coolest toy ever.

I just saw it on Facebook the other day.

Stealing Home said…
You don't know how right you are when you're right, N.O.
Back in the 70's the neighborhood guy I idolized absolutely had long hair and a mustache.
May 31, 2014 at 11:04 PM

petethan said…
Nomo would probably need a chiropractor immediately if he were to attempt one pitch with his old windup. Therefore, I feel like an old dude in my forties at this moment.
June 1, 2014 at 2:11 PM

Fuji said…
Why did you have to point out that World Headquarters Edition stamp? I somehow didn't even notice it when I first stared at it. It's funny how I sometimes see what I want to see. I'm off to track down a stamp-less version of this card.
June 1, 2014 at 11:28 PM