Happy new year to me

January 11, 2013
I received a follow-up physical today. They (and I) wanted to see if what they saw last June was just a fluke or whether I'm some kind of freak.

How could someone diagnosed with Type 2 diabetes in March not have it in June?

Well, the results are in, and I still don't have diabetes. I'm a freak.

Not only that, the doctor said my blood work numbers are the same as "an 18-year-old who just came in for his athletic physical." He also wanted to know if I wanted to give a clinic to his patients. Needless to say, that made me feel good, and it's definitely a great start to the new year.

But let's steer it toward cards again, OK?

Another bonus to the new year, for me, has been the return of some bloggers who were absent for a few months. No Relics Pulled, Indianaland Baseball Cards, Uncle Doc's Closet, Carl Crawford Cards and The Lost Collector have all emerged in the last couple of weeks. It seems "blog more" was on a lot of resolution lists. That's tremendous.

I also received a package recently from another absent blogger, Joe L., who ran/runs the Cobb and Halladay blog. I hadn't heard from him for awhile, so I was smiling when I saw the package. He said he hasn't been doing much collecting lately, which I can understand. But he still reads the blog, and I appreciate him saying so.

I will always respect Joe L. for one of the most amazing card packages I have ever received. I still consider it likely the greatest card package ever.

This package was a lot more subdued, of course. But Joe still knows how to pack a punch. 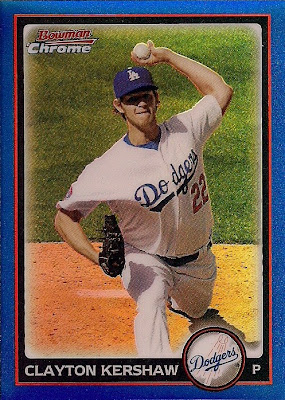 A nifty 2010 Bowman Chrome blue refractor of my favorite player.

Your card packages will go to the top of the quality line if you include items like this. By the way, Kershaw is whipping the pants of all of his fellow major leaguers with his offseason. "What'd you do in your offseason, Clayton?" "Oh, I went to Zambia and helped orphans." 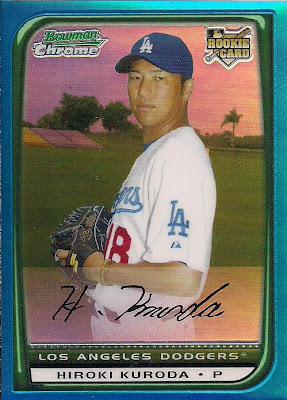 This is from 2008 Bowman, Hiroki Kuroda's first MLB cards. This was back during the good ol' days of Hiroki. But now that he's re-upped with the Yankees for a second year, I am just not impressed with him anymore.

So enough about that.

Finally, there was a card that I don't know whether I should consider it a double or not: 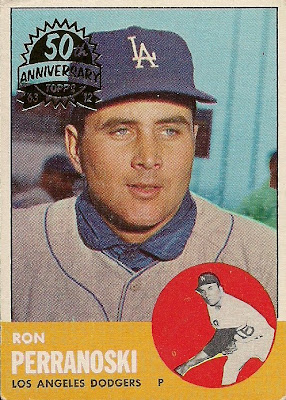 This is one of those buy-back cards out of 2012 Heritage. Those ridiculous anniversary buy-bank stamps drive me to drink, but, of course, it makes me wonder whether it is a whole different deal than my regular 1963 Topps Ron Perranoski. 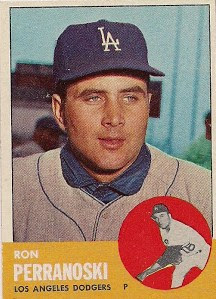 This is the one I picked up at a card show last October. Notice the non-obscured photo.

So, what do I do, consider the buy back card a whole separate deal (which would be tacit approval of what Topps is doing) or throw it in the dupes pile?

I don't know if I can throw it in the dupes pile, or even trade it. And, yeah, I hated that I just said that. So it's probably staying with me, so I can grumble about it for the rest of eternity.

But all in all, a great set of cards.

Thanks for saying "hi," Joe. Hope you get back into collecting again soon.

Again, glad to see a bunch of other folks back to blogging, too. It's making 2013 fun so far.

Nachos Grande said…
I say the buyback card is a different card - unfortunately I might add. It's similar (in my mind) to a red bordered card vs. a blue bordered card. I've started to run into things like that with my Barry Larkin collection...stupid parallels/buybacks
January 11, 2013 at 7:58 PM

Commishbob said…
The 'collared windbreaker under a jersey' look always bugged me for some reason.
January 11, 2013 at 7:59 PM

Send me an email with your address as I seem to have misplaced it.

ernest said…
Congrats on being a freak! That's awesome to hear. Someday, you might have to provide your secret.
January 11, 2013 at 9:06 PM

AdamE said…
I thought about writing a new years resolution post but I knew that blog more would have to bee one of them and I didn't want to kid myself.

Nick said…
I'm not a huge fan of those "buybacks", either.

But, as far as my collection goes, I'd have to consider it a different card. I'd probably keep both issues.

Anonymous said…
With news like that, congratulations on being a freak of the best and most enviable kind! Seriously, I'm happy to hear that for you.

And, blue refractors? Yeah, that card looks great, alright. Silly me. With that 20+ year hiatus, I don't have one refractor around here. Time to get on the bandwagon as I'm consistently liking what I'm seeing in the Refractosphere.