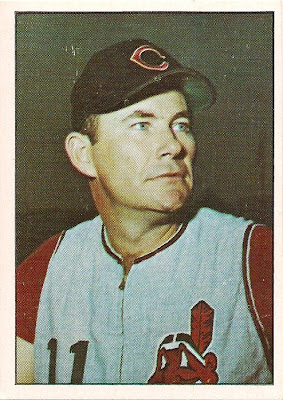 This is a card from the terrific 1978 TCMA set, "The 1960s." I received it from Dime-Box Nick, and the gesture has me half interested in chasing this set.

Not only was it issued during a period when I was a youngster engrossed in every last baseball card issue -- there weren't a lot of them in the 1970s -- but it covers a period of time in baseball that's always been a mystery to me, 1960-69.

A lot of this is my fault, of course, obsessing over '70s and '80s dudes while also trying madly to keep up with what's taking place on the diamond today. But a lot of it is other folks' fault, too. When people bring up baseball in the '60s, what do you always hear?

All of these people and things, of course, are very worthy and deserving of telling and re-telling. But there are a lot of guys from this decade that excelled -- for long and short periods of time -- who you never hear about anymore.

And I'm not just referring to players like Tony Oliva or Dick Allen, players who many have tagged as overlooked.

That's the person who is in the photo on that card.

You had know idea, did you?

That's how little I hear about the guy.

People aren't even making fun of his name, for crying out loud.

To be fair, Adcock was more of a 1950s guy, one of the key figures on the late '50s Milwaukee Braves teams that reached the World Series in back-to-back years. But you don't  hear about him even in those terms. It's all Aaron, Mathews, Spahn and Burdette.

This is why I want more of these TCMA '60s cards. I haven't bothered to look up the checklist, but I'm hoping there are cards for other overlooked greats. Norm Cash. Jim Gentile. Bob Veale. Dick Radatz. Stu Miller. Earl Battey. Bill White. Dick McAuliffe. Albie Pearson. Bob Allison.

And I especially hope there are cards of guys I didn't even know until just looking up some '60s stuff now. Max Alvis, John Romano, John Wyatt and Pete Ward all had significant seasons in the '60s and nobody knows who they are now.

(This is the point where Jim From Downington points out his posts on the various players I just mentioned. Thanks, Jim for shedding some light).

Like I said, maybe this is my fault. Maybe I'm not going to the right places. Maybe I'm too absorbed with Oscar Gamble's hair or the Padres' late '70s uniforms to read up on guys like Vada Pinson and Leon Wagner. Or maybe I just need to find the right website or a book to read.

But I don't have time to read.

That's why I need the card set to do the work for me.

Cards have been pulling the heavy education load since I was kid. Why stop now? 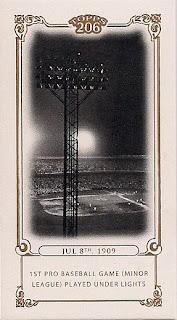 I have an announcement.

See that card there?

I want all of them. Every one.

I've received 3 or 4 of these in card packages in the mail. Obviously people want me to have the card. So why not just extrapolate on that and try to get them all?

So if you've got one of these, I want it.

SpastikMooss said…
That Wallach blog is awesome. And best of luck getting those lights!
January 2, 2013 at 9:09 PM

Nick said…
Had a feeling you'd like the Adcock. Personally, I think it's one of the better "night cards" of all-time.

Outside of a handful I found from a quarter box last year, I've had a tough time finding anything from those awesome '60s TCMA cards.

I love them for the exact reasons you mentioned. That quarter box yielded a card of Masanori Murakami, the first Japanese player to ever play in the bigs.

I still can't get over how cool that one is.

carlsonjok said…
I also really like those TCMA sets, always grab them when I find them in a discount box, and have considered trying to put the set together.

FWIW, Joe Adcock is a short print in the 1963 Fleer set. Rumor has it he was dropped from the last print run in favor of the checklist (the same checklist, I might add, that you use for your One Card Challenge avatar.