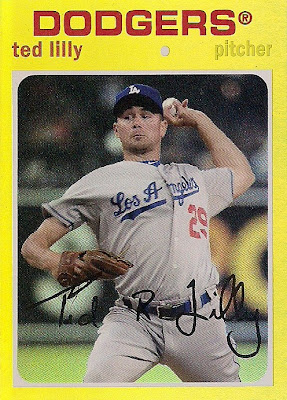 False alarm. The card show was moved to next week. Good thing I didn't drive all that way through dicey conditions for nothing, right?

Anyway, let's concentrate on the fact that I still have a card show to go to and turn our attention to the next awesome night card for display.

It's a great one, but only in the way that it turns that old card blogging cliche "the scan doesn't do it justice" on its head. This scan, in fact, does the card too much justice. It doesn't deserve so much justice! It's ill-gotten justice!!

I received this card in a trade with Twitter compadre @teddyballgamebb. It's one of those shiny parallels from last year's Topps Archives. It's the first one I've ever come across because I dropped Archives like a scalding spud when I saw what it looked like.

These chromey things are actually shiny gold in color in person, but I've seen them scan greenish on various blogs. My scanner, for some reason, turned Lilly's border bright yellow.

I like it a lot, and it makes me think "what would the 1971 Topps design look like in various other colors?" Red. Green. Blue. Pumice. Guacamole. Tangerine. (sorry, I just flashed on the days I used to stock shelves at a drug store and marveled at all the made-up names used for nail polish).

If I was proficient in photoshop -- or even had photoshop -- it would be one of the first things I'd test out. I think all of the examples would look pretty cool. (If anyone wants to do it for themselves and throw it on their blog, knock yourselves out).

Instead, I'll settle for this scan, even though it's giving the card too much credit.

I also received this card in the trade: 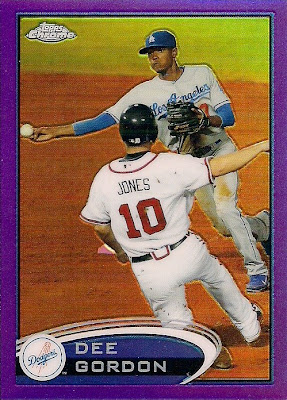 The scanner got that one right.

I don't know about Dee Gordon these days. Seems like the only thing he has is speed now. But we'll always have the 2011 Card of the Year. And we'll always have Chipper Jones getting thrown out. I won't forget that.

Good stuff. And a nice trade.

Makes me glad I don't have to rely on card shows (and fluctuating show dates) to get all of my cards.

Night Card Binder candidate: Ted Lilly, 2012 Topps Archives, chrome parallel, #91
Does it make the binder?: Not the parallel. I'll double-check and see if I have a dupe of the Lilly base card.

Roy-Z said…
I saw some lake effect bands up north earlier, but it's clear in the Collectorsfest 62 stomping grounds.

I'm glad I checked the date of the show again, as I originally had it written down as next Saturday - when we have about six other things we needed to do.
January 20, 2013 at 5:12 PM

Hackenbush said…
I'm a big Ted Lilly fan but his cards are mostly boring. Probably could be said for most pitcher cards I guess. That's why it's nice when they mix it up with a pitcher batting or being goofy, etc.
January 20, 2013 at 6:41 PM

runfore!kelloggs baseball cards said…
If you want to know what 1971s look like in different colors, check Topps football cards. The Lilly card looks like those or old Wonder Bread cards.
January 20, 2013 at 7:31 PM

Anonymous said…
Both cards are phenomenal and not even close to a Dodgers collector, I have the standard Chrome Refractor of that Gordon as it's a great action card.
January 20, 2013 at 10:43 PM

deal said…
If you really interested in Photoshopping your own 1971 Topps cards you can use pixlr.com. It is basically a web version of photoshop. free and fairly ez to use. and it stores your pix/cards as well. IT is the tool I have used to build the last 2 sets of Phungo cards.
January 21, 2013 at 7:59 AM

GCA said…
I'll probably do the color tests. Need something to generate some blog posts more than nine times a year.