The easiest time I've ever had completing a set 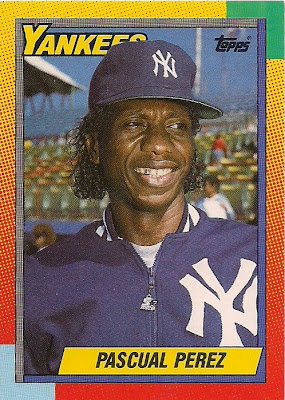 I have had a decent amount of success completing sets. By my count, I have completed 36 of them -- probably more if you include dinky 10-card insert sets.

But only twice have I been able to complete a set without even trying.

I don't know. Strange and wonderful things happen when you start a card blog.

The first time was when Max sent me the 1981 Topps Traded set. What a glorious day that was. I devoted four posts to it.

Then last week, it was another traded set. From completely out of the ether, Too Many Verlanders sent me the entire 1990 Topps Traded set of 132 cards. I didn't ask for it. I asked for Dodgers and Bills, and WHAM! there was the 1990 Traded set. Pretty cool.

The '90 Traded set doesn't get a lot of love. First, there are two different versions of it. The factory set and the pack set vary in texture on the back (light cardboard, dark cardboard). That's just stupid.

Second, I'm pretty sure you can get the entire set for a buck. It's one of the cheapest and most prevalent traded sets ever made.

Third, you think the 1990 Topps base set is ugly? It wins the beauty contest in a rout when stacked up against its ugly step-sister, 1990 Topps Traded.

But I'm here to praise, not condemn it. So take a look (or shield your eyes, whichever) at some of the cards in the set: 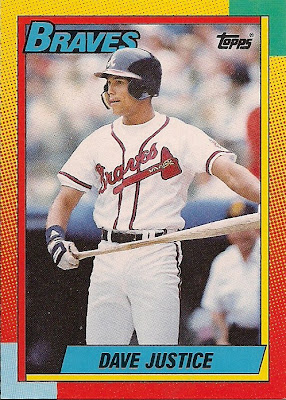 The most well-known cards in the set are probably the rookie David Justice card. And the rookie John Olerud card. 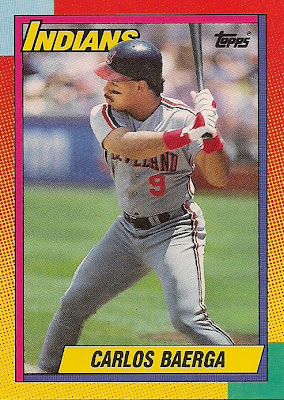 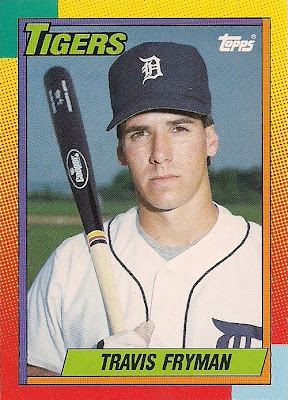 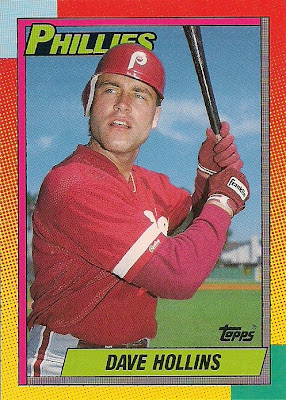 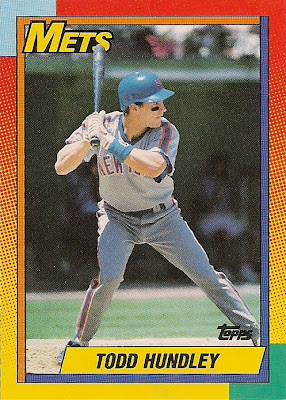 There are a few other notable rookies, although all of them meant more at the time than they do now. 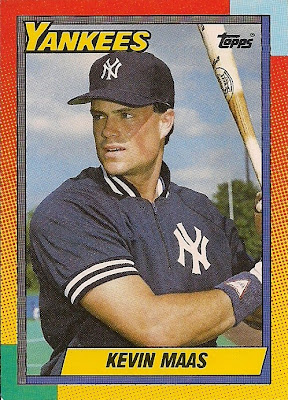 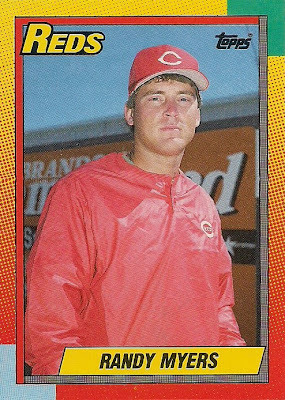 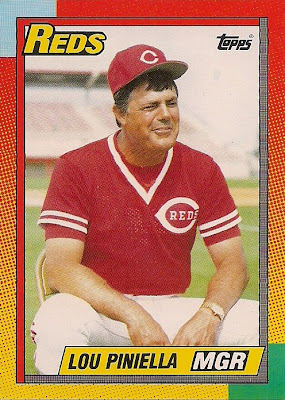 I feel sorry for Reds fans when I see this set. There are several notable 1990 World Series Reds here. I didn't even scan Billy Hatcher or Hal Morris. And they're all framed by this ugly, clown design. 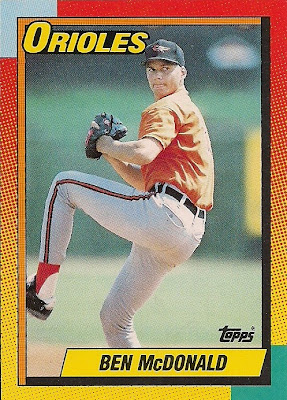 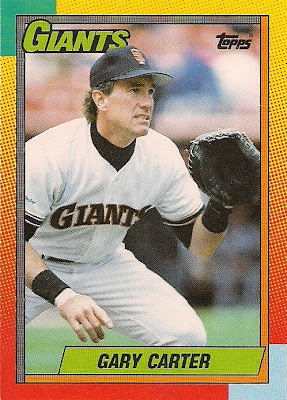 Of course, the best part of Traded sets, for me, are not the rookies, but the players in new uniforms.

Gary Carter as a Giant. 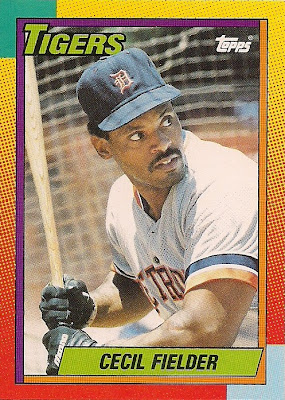 Cecil Fielder back from Japan and as a Tiger. 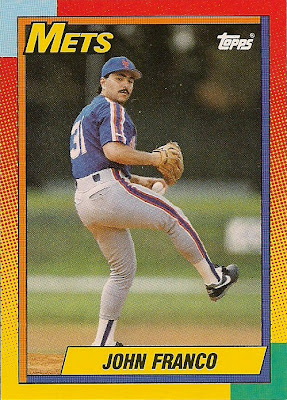 John Franco as a Met. 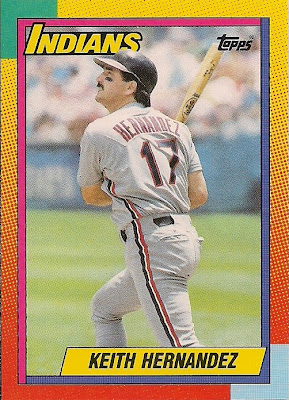 Keith Hernandez as an Indian. 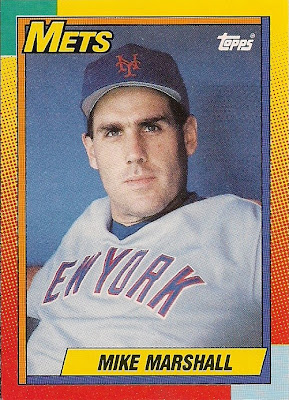 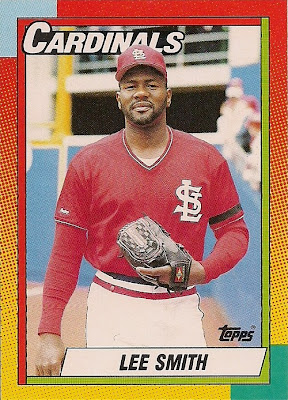 Lee Smith as a Cardinal. 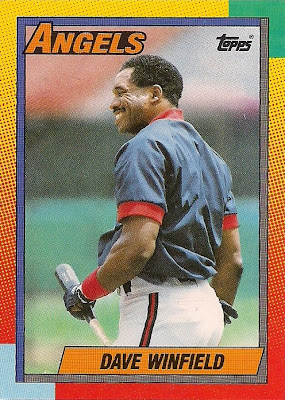 Dave Winfield as an Angel (and looking old). 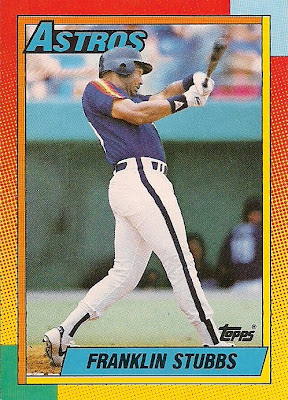 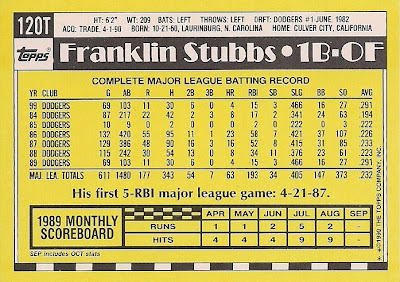 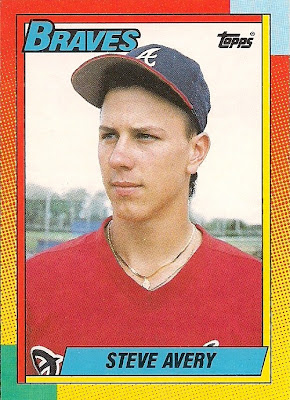 And the '90 Traded set has a few other notables, like Steve Avery's first Topps card in which he's not wearing his high school uniform. 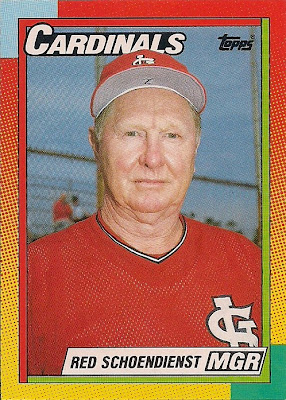 And the last card of Red Schoendienst that was issued during his long, distinguished career. 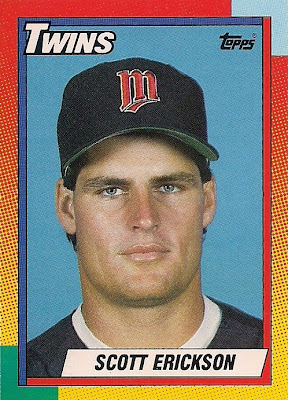 And, of course, there are cards in this set that amuse only me. 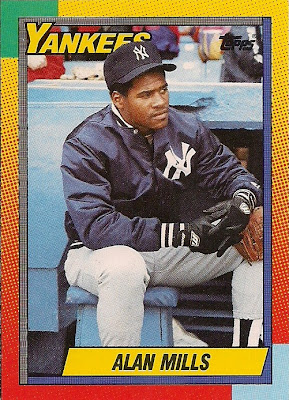 It really must be cold there. 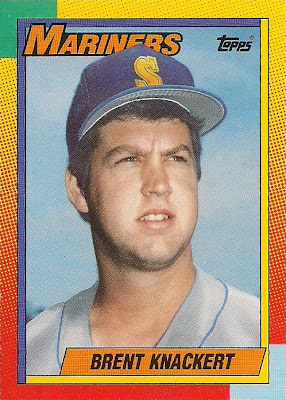 And, of course, the 1990 Traded set was one of the last sets in which the airbrushing was so APPARENT.

In fact, I found one example that I can't believe I haven't seen on any blogs before. That card is a definite future post. Stay tuned.

The 1990 Traded Set certainly is an odd, underappreciated, misfit set. But in this season of Islands of Misfit Toys and Charlie Brown Christmas Trees, it's pretty much the perfect set for this time of year.

I, for one, am thrilled I completed a set so swiftly, through no effort of my own.

Now I've got to find another binder.

Anonymous said…
The 90 Topps set would probably be the worst in existence in my mind. But at the same time I'm starting to like it better than I used to.

Dennis said…
That was just a throw-in to fill up the box, but this is easily the most 1990 Topps Traded cards I've ever seen in one post, so congrats, you've got that goin' for you. Anybody else want one of these? I have one left!
December 16, 2012 at 5:43 PM

SpastikMooss said…
That Fielder is super neat. I remember his Japan stint blew my mind as a kid. Dude left the MLB, came back, and was way more successful. Craziness.
December 16, 2012 at 7:48 PM

I haven't given this set any attention is close to twenty years. A huge thanks to you and Dennis for sharing it and bringing back memories of Kevin Maas and Ben McDonald.
December 16, 2012 at 9:24 PM

Cardboard Jones said…
And of course- after telling us not to look into the eyes of Scott Erickson, what do I do? Yep.

Classon Ave said…
A baseball-type pinball machine that I used to play at my summer hang-out (a batting cage) used to spit 90 Topps Traded cards out as "prizes."

The Junior Junkie said…
1990 Topps is to every other Topps design what Joey Buttafuoco pants are to regular pants.
December 19, 2012 at 10:56 AM

EggRocket said…
I've always hated 1990 Topps. Having a traded set seems like a making sequel to a Rob Schneider movie.

I also hate the idea of purchasing a "factory set". If the fun is in the collecting then where's the fun? Buying factory sets takes the "collecting" out of collecting. But I saw a 1990 factory set at an auction at a local card shop without any bids. I ended up getting it for $2. 792 different cards for 200 pennies. Yeah, I still probably overspent by about a buck-eighty, but whatever.
December 21, 2012 at 8:44 PM