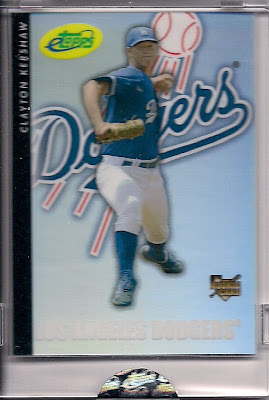 Back during my first year of blogging, in 2008, I jumped into everything about cards that I possibly could. I sampled every kind of pack, explored all the sites and forums, bookmarked every last page, and probably drove bloggers crazy with emails and questions.

One of the many things that I did was sign up for etopps. I can't say I fully understood the concept, and now that it is dead, I still don't have a handle on it. Near as I can tell, you could try to land issued cards every week, which were in limited quantity, and then let the card sit in your portfolio -- where I guess it could "mature," I don't know -- or eventually order the card to have for real. You know, like normal collectors do.

But the problem was I could never get a card. They were always gone by the time I put in a request. There are thousands upon thousands of collectors who are much more psycho-rabid than I am, I learned.

Eventually, I gave up. I assumed I'd never have an etopps card.

Later, I figured out that there were older etopps cards all over ebay and elsewhere and that I COULD have an etopps card -- for realz -- if I wanted one.

Years and year went by before obtaining one of these cards ever became a thought in my head again. Then, during a rare carefree moment a couple of days ago, I stumbled across this 2008 Clayton Kershaw etopps card and decided to order it up.

Today, one of those mythical, elusive cards of which more than one collector has thought "are those things really cards or is it just some fake, online thing" arrived at my door and is now in my possession.

And I'm here to tell you that the card is, in fact, real.

But is it spectacular?

Well, I don't know. The card is encased, and I knew it would arrive like that. All etopps cards are like that, so you can "protect your investment." (The worst thing to ever happen to cards is when Wall Street lingo wormed its way into the hobby).

Just from viewing it inside the case, it's very shiny and appears to be of the chrome variety. In fact, it's curling a bit like a typical chrome card, which is kind of disappointing.

So to crack or not to crack. That's the quandary I face. 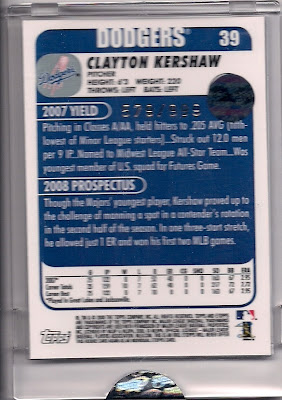 Of course, etopps died in 2012. I'm not economically minded, so I have no idea if the concept was a success, a bust or a big "who cares?"

I just know I have a super shiny numbered Kershaw card from the first year that he appeared in a Dodger uniform on cards. That's pretty cool.

Now find me a hammer.

Commishbob said…
I think I have three, a Koufax, a Unitas and a Ben Jarvis Green-Ellis. I think the last one is the only one I actually bought through the program. I picked him up on waivers for my fantasy team and I have an obsession with adding a card of any play I own as fast as possible. The eTopps was his only card at the time. Like you I never fully internalized the concept and never bothered with it again until last summer when I got the Koufax and Unitas on eBay.

Nick said…
Chalk me up as one of those people who didn't think these actually existed.

I never took the time to experiment with the whole "eTopps" thing.

Glad to see you finally got your hands on one, though!

Unknown said…
I got one on ebay, never wanted to put up good money on one and still have a huge shipping rate just to get it. Some are nice cards, may some day buy a few more. I would keep them in the "official" case unless the case is defective.
December 29, 2012 at 9:03 PM

Sascards67 said…
The only ETopps I have I got on e-bay. It commemorates the Pine Tar Incident. Had to have it in my George Brett player collection. I took it out of the case so I can store it with the other cards.
December 29, 2012 at 9:09 PM

unclemoe said…
Crack it. The thing is four years old. It won't curl any more than it already is.

arpsmith said…
I actually have quite a few. A few of my player collections (McCovey, Rickey Henderson, Ronnie Lott) have eTopps cards and I picked up a bunch of former USC Trojan football players on the cheap. Still have them encased but thinking about cracking them to save some space.
December 29, 2012 at 11:41 PM

runfore!kelloggs baseball cards said…
I assume you've already opened it. I know you previously discussed cutting a Cey from a nice Kelloggs panel. I'm all for opening it.

I think that the back of the card looks better than the front. I never paid enough attention to know about these cards either.
December 30, 2012 at 12:08 AM