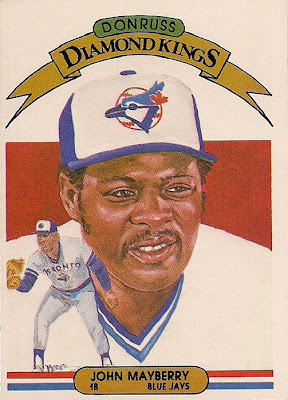 I'm told that today is baseball card artist and illustrator Dick Perez's birthday. My brief research was only able to turn up a birth year on Perez, not a date. But this guy seems to know, and he's a big Diamond Kings fan, so he probably knows more than I.

I'm already on the record as not being a Diamond Kings fan. There are a few reasons for this.

The first is, while Diamond Kings are huge favorites among those collectors who were young kids when Donruss first started producing Diamond Kings, I was a junior in high school when they first showed up. And you know how 16-year-old boys like to tear things apart. The world isn't "oh, wow, COOL!" anymore. It's more like "what the f&%# is THIS?"

The second is, I will always be a "photography over illustration" guy. It's not that I don't like drawing. I LOVE drawing. I've done it a lot and am a semi-adequate sketcher. (But I've written about that already). I just like the realism of photos better. It draws my eye more. Illustrations can do that, too. But with illustrations there is a lot more "what is THAT?" And not in a good way.

Finally, Perez's illustrations don't always seem to be up to par, or at least that's been my thinking for a long time. But I think I need to change my thought process here.

I've gone over some of his '80s Diamond Kings cards and I've realized that I may have been a bit too harsh. 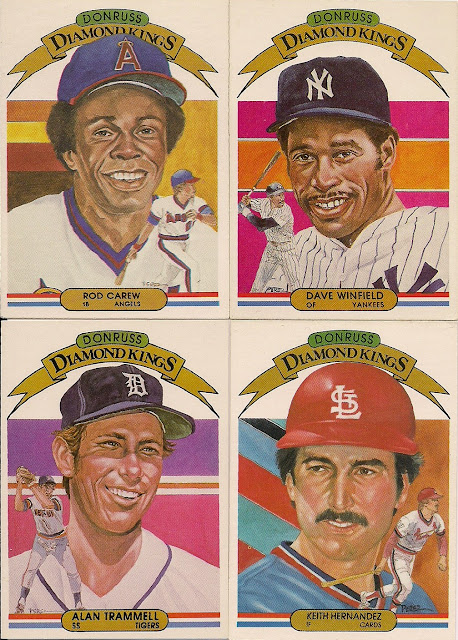 Here are some of the first Diamond Kings ever issued, from the 1982 Donruss set.

Keeping in mind that my brother and I ripped these apart when we were opening packs of '82 Donruss, these are my favorite Diamond Kings cards ... by far.

I've always thought that was because they were the best-drawn Diamond Kings.

So my reasoning for thinking the '82 DKs are better has to have a better explanation than "they were drawn better."

And I think I've figured it out. 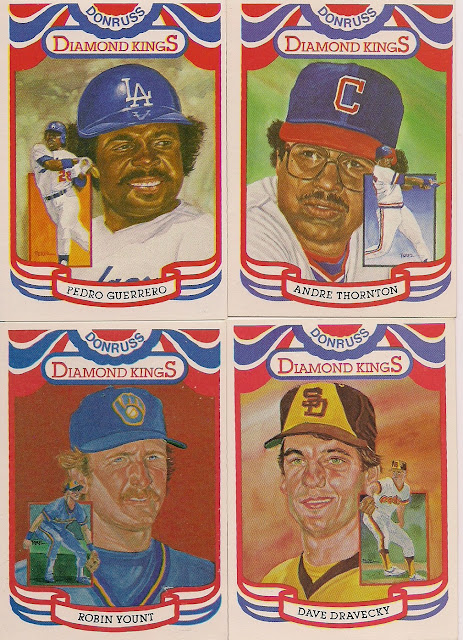 The first time I thought that "hoo, boy, Diamond Kings are really getting bad" was in 1984. The '84 DK design by Donruss was a lot different from the first two years. Donruss added a patriotic banner and shrunk the bust photos.

The inset photo infringes on the head shot, in my opinion. And the banner stuff is just too much. The illustration evaporates into all the red, white and blue color.

Oh, and THAT is not Dave Dravecky. 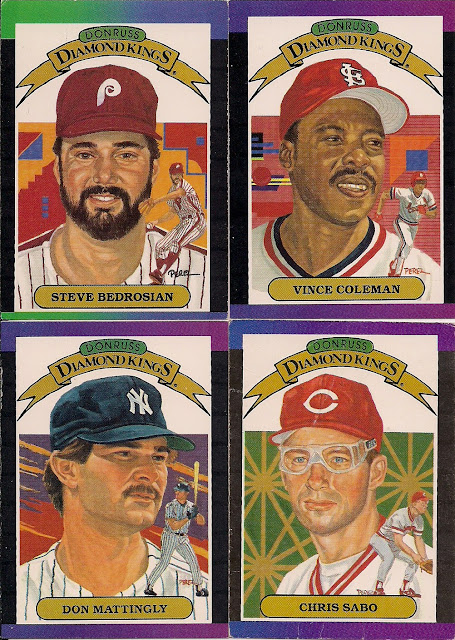 As I looked at later versions of Diamond Kings, I realized that the likenesses of the players, for the most part, are pretty similar to those in the 1982 set. They aren't any better or worse on a general scale. And that's all you can ask for from an artist of this kind. Consistency. 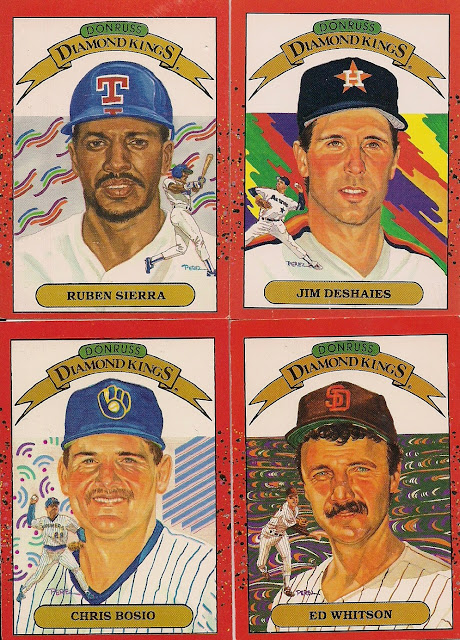 But when these cards from this period came out, I HATED them. And I instantly assumed that it was a downturn in the illustrations. Perez has lost it! He's getting sloppy! And what's with the bizarre backgrounds? 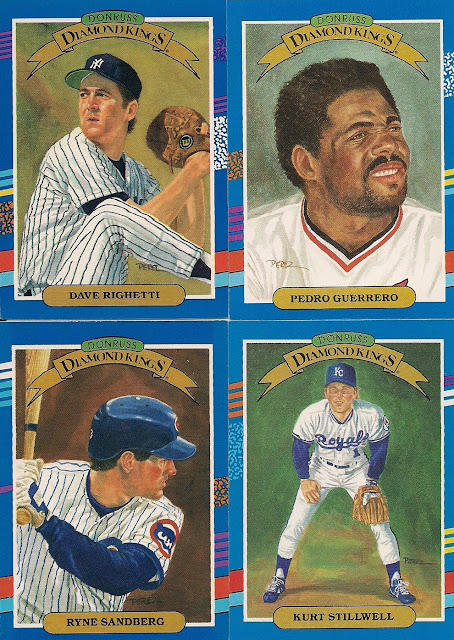 But then it dawned on me.

It's not the illustrations. It's the borders!

My opinion of Perez's images were based almost entirely on what borders were used by Donruss. And, boy, I do not like the borders on 1991 Donruss.

But even beyond that, I think the reason my opinion of Diamond Kings dropped even more from those first reactions in 1982 is because flashy borders take away from an illustration. While borders are good for helping collectors distinguish from one set to the next, it's brutal on illustrations. What you have is an illustrated border to go with an illustration. Illustration upon illustration! They clash or blend in and the power of the illustration is diminished. 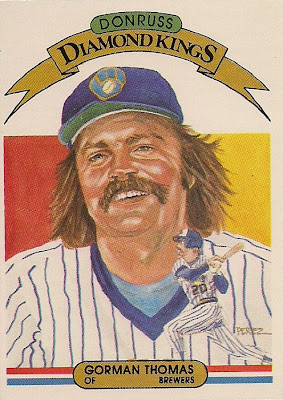 This is so much better. No border. All illustration.

(I think it's interesting that with photos I prefer borders and with illustrations I don't).

So I think that's what it is. Dick Perez didn't get worse. It's just the shrunken down images with two much going on around the edges made me think he got worse.

That doesn't mean I've come around totally on Diamond Kings. Some of them are still terrible. Even the later ones from about 10 years ago can produce a stinker. And not all of those were drawn by Perez. 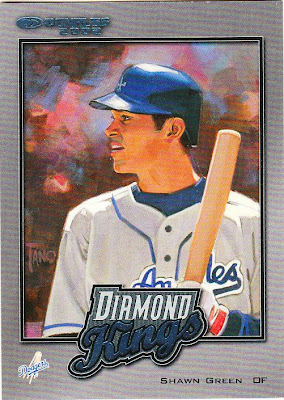 I hate this thing. 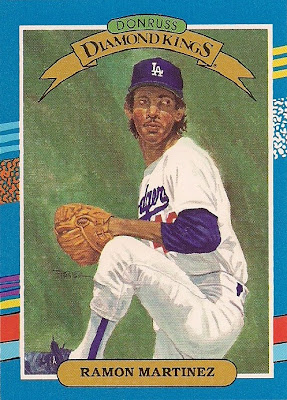 And this might be in my top five of least favorite Dodger cards ever. Ramon Martinez should sue.

But I guess that's the nature of art. Eye of the beholder and all that. It's ART. It's not an exact science. I have to think of that.

If it really is your birthday.

And if overanalyzing and critiquing your life's work really is a birthday gift.

hiflew said…
I think that 1990 Donruss Ed Whitson Diamond King might be the most plentiful card of all time. I know I have had at least 20 copies of it through the years.
December 5, 2012 at 8:40 PM

Jeff said…
I was half expecting you to show one of the 90 or 91 DKs with the borders erased for comparison sake. Would that make them better?
December 5, 2012 at 9:58 PM

Fuji said…
Great post. I've always been a fan of Diamond Kings, but the borders and backgrounds truly separate the good from the great.

I actually really like the 1984 patriotic banners, but I don't like how the action shot covers part of the head.

Ironically... one of my favorites is the 1985 Gwynn. That set also features a portrait/action shot... but this time his batting illustration doesn't cover his head shot.

Classon Ave said…
I was eleven in 1991, so I absolutely loved the Diamond Kings, though my affection has faded. I still like the '87 set, the borders lend themselves well to the DK's.