Better shoppers than I 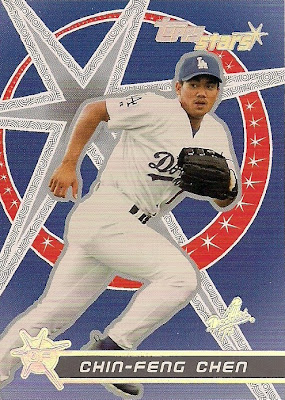 But I'm not as impressive as some of you people out there.

You know who you are. The ones who send me cards that arrive immediately before the holiday, as if they're Christmas gifts or something. Some of you even write festive things on the notes with the package, like "Merry Christmas" or "Happy Holidays." You're all so on top of everything.

Meanwhile, I've halted card shipping because of a Pre-Christmas Post Office Phobia. There won't be any "Merry Christmas, You Wonderful Blogger" notes from me because I can't get out from under the holiday. But please note that I think you're all terrific. And, much, much, much better shoppers than I.

So let's see what arrived amid all the ribbons and bows.

First a couple of cards from Mark of Mark's Ephemera. A Merry Christmas to you, too, sir. 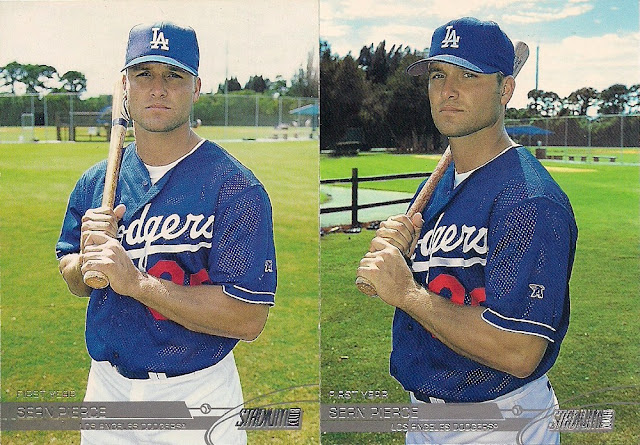 Here are two cards of the same player from the same set. Mark asked if I needed these cards. I didn't have the heart to tell him that not only did I not know, but I barely knew what set it was. (I often get 2002 and 2003 Stadium Club confused).

Mark didn't have time for my ignorance and said, "fine, I'll send you both of them, you clueless bird." Or maybe I just imagined the bird part. 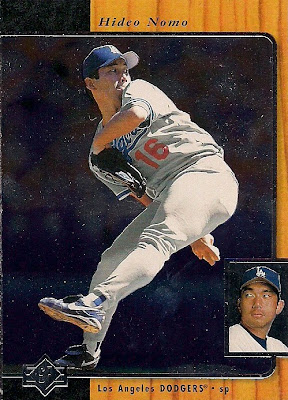 Of course, this is the card that I enjoyed most out of the package. It is a Hideo Nomo card that I needed -- No. 381 on the list if you're keeping track -- and it's the last card I needed to complete the 1996 SP team set.


Now let's see a pair of cards from Chris at Nachos Grande. A Happy Holidays to you as well, Nachos. 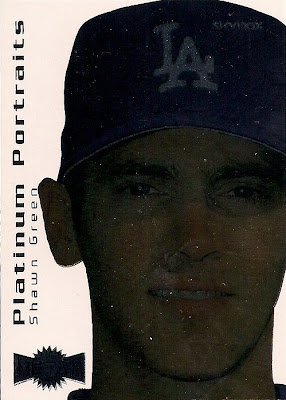 Confession time: I think I requested this card. At the very least, I admitted to not owning this card in a public forum. And now it's my problem.

I don't know what to say about this thing except that I've never owned a Van Gogh-style card before. It's kind of weird that Skybox would go through the effort to cut off a player's ear for the sake of an insert set. In fact, I turned over the card to see if there was blood dripping on the back. 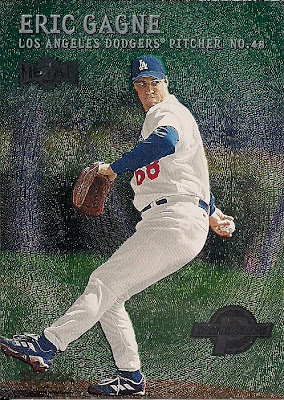 To make up for the one-eared card, Chris sent me this fancy emerald-parallel of a hairless Eric Gagne. It's one of those Much Cooler In Person cards.

And it's the perfect color for the holidays.


OK, moving on to some minis from Jon at Community Gum. Happy Holidays right back at you, Jon. 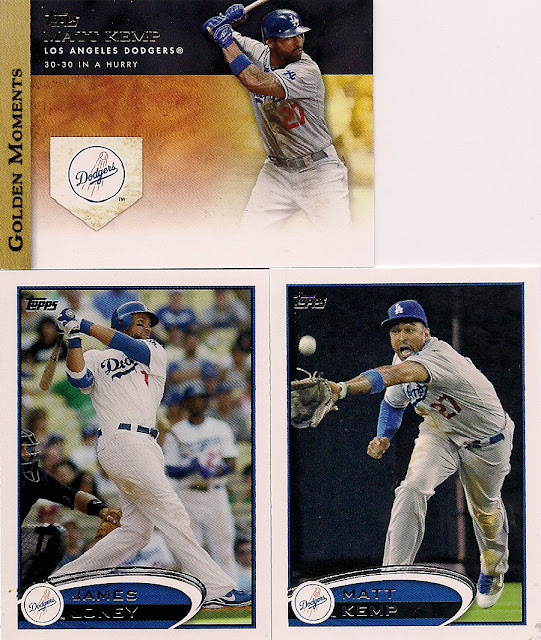 These were the Dodgers from Jon and Andy's big 2012 Topps mini break that I still needed (I'm down to like 5 or 6 that I need from the set).

These cards will come in very handy in demonstrating something coming up in a moment on this post.

But first I wanted to mention how efficient Jon is at shipping out cards at this time of year. It took me forever to get some cards together to send off to him as payment for these minis. I started to think that the Gum folks thought I had forgotten about them. So I quickly dashed off a Twitter message letting him know I finally sent them out, and he thanked me.

Then, the next day, the cards that I wanted arrived in the mail. Now that's a quick turnaround! (heh).


Lastly, let's see some cards (and other stuff) from Andy of Thoughts And Sox. 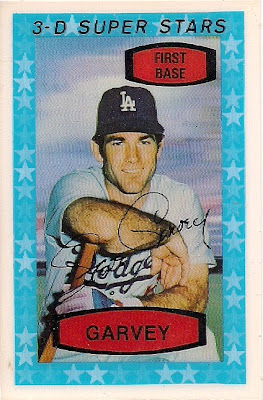 It's a Kellogg's card of the 64-year-old Steve Garvey! Excellent! 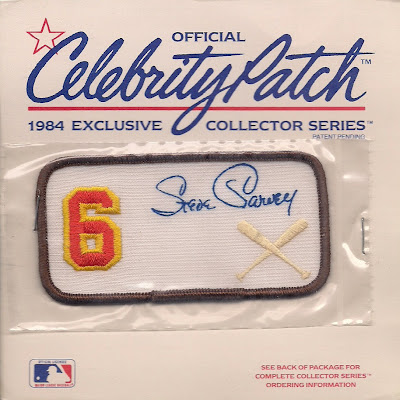 This is from the days when people did semi-normal things with patches, like sew them onto their jackets, instead of what they do today -- stuff cut-up pieces of them into cards and drool over them.

And it's an OFFICIAL Celebrity Patch. Even better.

Unfortunately it has Padres colors all over it, since it's from 1984. So there's no way I'm stitching it onto anything that I own.

Let's move on to the next bit of wonderfulness. 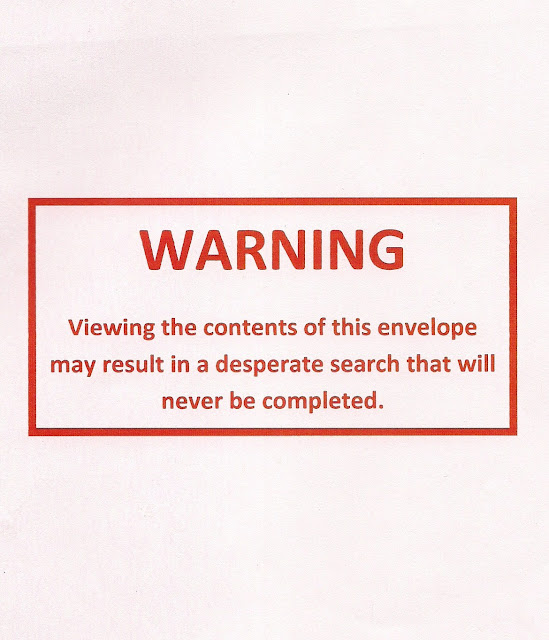 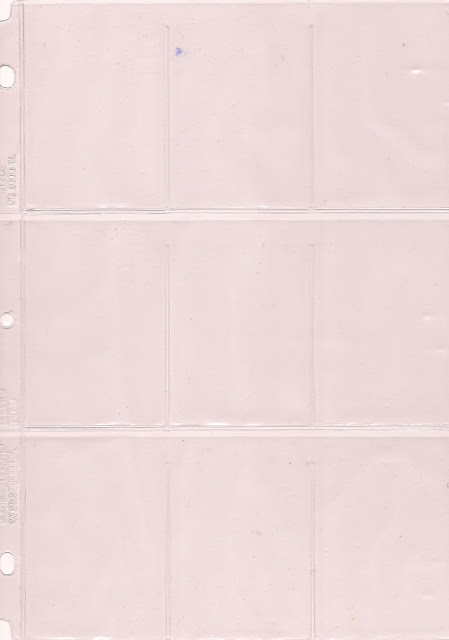 OK, it's a nine-pocket page (plus that ink stain at the top that I can't get off my scanner glass).

But it's not just ANY nine-pocket page. 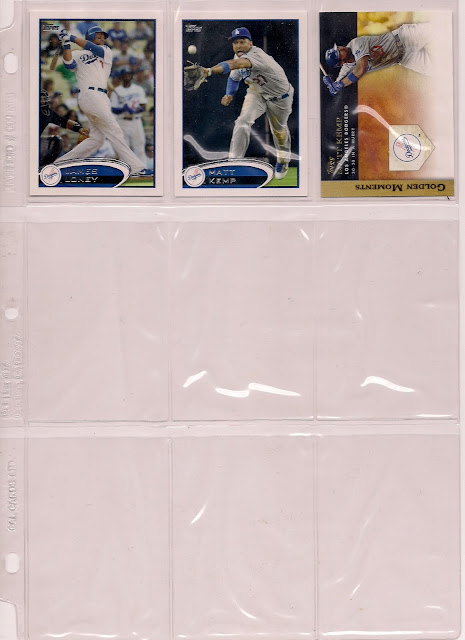 It's a nine-pocket page that stores minis! 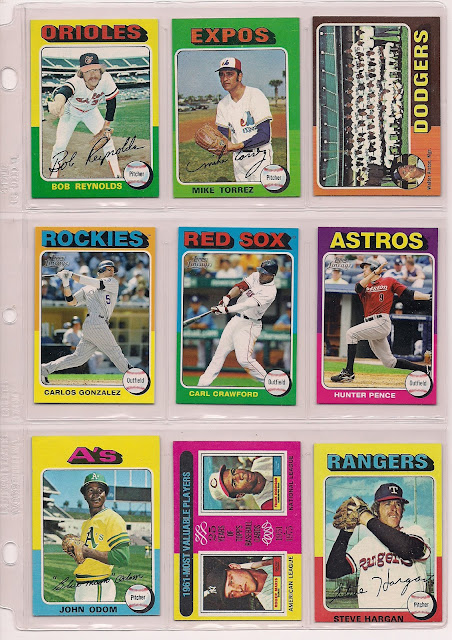 Actually, Adam found two pages that he had for years and sent them to me. I'm hoping that with the start-up of Topps minis, from the 2012 set to next year's 72-style minis, that someone will begin making mini pages again so I can finally store the only cards that rightly belong in those pages -- 1975 Topps minis!

As for these two mini pages, I'm not sure what will go in them. Maybe I'll just wave them around in front of strangers and exclaim wild-eyed, "SEE!!!!!! I'm not crazy!!! They DO exist!"

And that's an example of the package greatness that I've received lately just in time for Christmas.

That's not even all of it. There a couple more nice ones coming up soon. Including one tomorrow.

Get your bells on for that one.

Nachos Grande said…
Glad you got the cards. I have three more packages ready to go out to people but I was too scared to go to the post office on Friday (or Saturday). I'm guessing tomorrow will be safer.
December 23, 2012 at 4:39 PM

AdamE said…
I knew I had those two pages before I moved to AZbut didn't know if they were in the stuff I got rid of or not. After hearing that you use both sides off your card pages (18 instead of 9) I decided to change my storage ways. Not only did I gain about 300 pages I found those two mini pages in the front pocket of my 1990 binder. Evidently I don't look in that one very much; bad card designs and already having most of the stuff from that year, I guess.

Michael Chase said…
Boy that Nomo sure is an awesome card. I feel that I had it at one point in time but must have been lost in one way or another.

Those mini pages are also very cool. Not having mini pages has stunted my mini collection a great deal. : )

Mark Aubrey said…
When I first saw the Chin-Feng Chen card I thought, "Why is there the Rangers' logo behind a Dodger?".