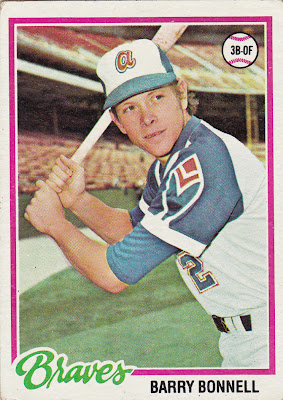 In 1978, I was introduced to the concept of "double-printing." I didn't know the term for it at the time. All I knew was that I was pulling cards of Barry Bonnell at a puzzling rate.

I didn't have any idea who this Barry Bonnell character was, or why I had triples of his card after only a few trips to the drug store. I was buying more cards than ever at that point, so I figured that it had something to do with that.

But soon I noticed that I pulled other players' cards over and over again. Lenny Randle and Cecil Cooper and Pete LaCock. Star players like Pete Rose and Ron Guidry. And nobodies like Jose Baez and Tommy Boggs.

A few years later, I learned that Topps double-printed a number of cards in the 1978 set. It continued the practice for another three years, which is why Tucker Ashford kept reappearing in '79, Larry Hisle was all too common in '80, and Matt Alexander was wearing out his welcome in '81. If you look in price guides, there is a "DP" designation next to the cards in those Topps sets that are double-printed.

Topps stopped that nonsense after the 1981 set and I didn't hear about "double-printing" too much in following years. A decade or more later, the new thing became "short-printing." Card companies made certain cards in the set were more scarce than the others. We all know that phenomenon well and can't get enough it, right?

The emphasis now is on the cards you can never find, rather than the cards that are too easy to find.

But there are still cards that keep popping up over and over, even if I haven't heard the term "double-printing" in years.

I didn't attempt to complete the Topps base set this year. But thanks to those value boxes, I was still suckered into a number of packs of Series 1. I noticed that cards of Freddie Freeman, Jonathan Niese, Chris Narveson and Ian Desmond showed up a lot. 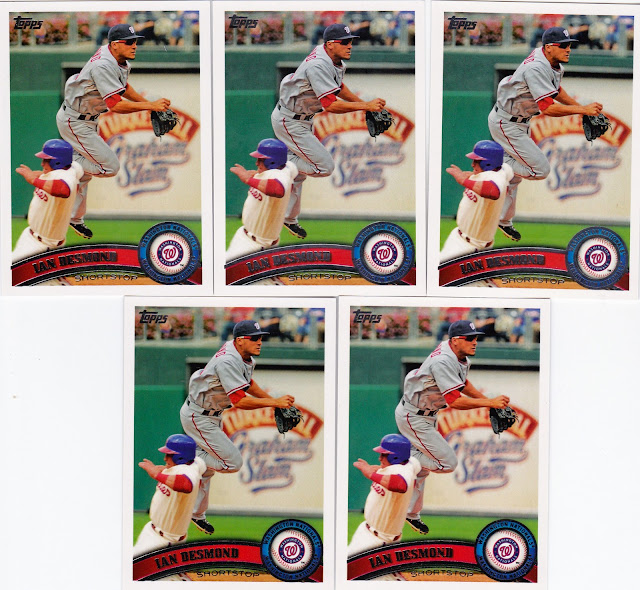 I've acquired at least five cards of Desmond (I'm guessing there's still a couple of others around here somewhere) without trying all that hard.

This is nothing new with the base set. The last few years, there always seems to be a series of 3 or 4 cards that come in a clump, that show up in packs more often than other cards in the set. Yet, I never hear anyone talk about "double-printing," and I never see anyone list the cards as "double-printed."

Perhaps they are double-printed and nobody cares anymore?

Or maybe they're not double-printed and it's just some law of averages thing.

But I really doubt it.

I especially doubt it in Allen & Ginter.

These three cards in this year's set show up linked together about as often as one those "quit smoking" commercials appears on the local news.

You can't tell me that those three cards were printed at the same rate as the other non-short-printed cards in the set.

These two guys insinuate themselves in purchased packs an awful lot, too. I barely know who either of them are.

And as lovely and inspirational as she is, I really don't need to pull another card of Aimee Mullins.

But I just don't purchase enough packs -- especially these days -- to determine definitively whether double-printing is still happening.

The people to talk to, I guess, would be the case-breakers -- if they even look at the base cards -- as they would open enough product to know for certain if some base cards appear much more frequently than other base cards.

All I know is what I suspect. And I suspect that Topps picked up the double-printing habit once again and never told anyone about it. Or rather, nobody bothered to notice and broadcast it.

I don't remember select cards showing up over and over again when I was going crazy collecting the '89 Topps set. Sure, I had 20 Scott Bailes cards, but I had 17 or 18 versions of many other cards, too.

So, I'm wondering, did Topps shelve double-printing, perhaps putting it on double secret probation, and then resume it without anyone noticing?

Or maybe everyone's noticed and nobody cares anymore. Maybe this is just a poor set-collector's problem while other collectors charge through the base in search of hits or the players they collect.

Personally, I think it's a big deal. It's frustrating repeatedly pulling an Ian Desmond or Josh Rodriguez card if I'm trying to complete a set, especially if that set has short-prints. That's one less chance I get to find a card I want, while I add to my growing pile of Chris Iannetta cards. 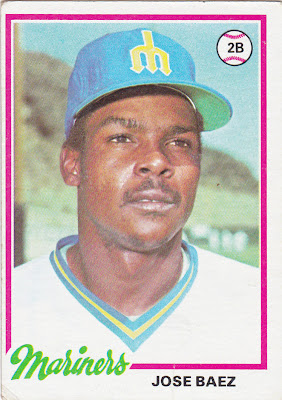 It took me decades to complete the 1978 Topps set. And yeah, I've blamed Jose Baez for it a few times.

Well, not Jose Baez himself. Just the five or six Jose Baez cards I pulled that year.

To this day, I can list many of the double-printed cards from 1978-81 without even having to look them up.

You remember when you were wronged.

Unknown said…
I've noticed that in a lot of retail rack packs or even single packs I get a lot of players that are coupled together if you will, especially in the base set of this year's Topps.
September 19, 2011 at 3:53 AM

Anonymous said…
I can't help but notice the dates you mention here. From '78-'81, and again nowadays... they're apparently double printing. I guess that's what a monopoly does for the market. There needs to be some legitimate competition again in the card market. Seems that stops this double printing junk.
September 19, 2011 at 8:26 AM

Dawgbones said…
Man, never noticed that Desmond card before, it's a day game in Philly. I have noticed, I forget which cards, it was either O.D. or Series 1, there were two cards that kept showing up in the same pack...
September 19, 2011 at 2:22 PM