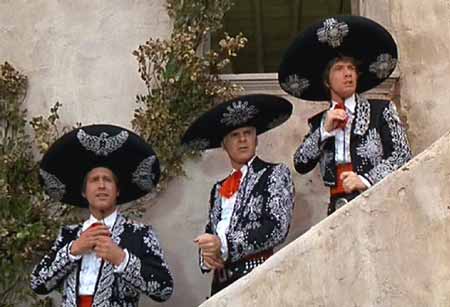 When I found the Willie Davis card for the anniversary post, it occurred to me that I hadn't featured a "Dodger Numbers" post for awhile. I thought a write-up on the players who have worn No. 3 in Dodger history would be a nice follow-up.

Then I saw how many players that had worn No. 3 over the last 50-plus years. There was no way I was writing that up last night.

I'm in a slightly more perky state today, so I'm willing to go through them all now. But I'll keep the words to a minimum, because there are lots and lots of names here. No. 3 is definitely not a Babe Ruth number for the Dodgers. 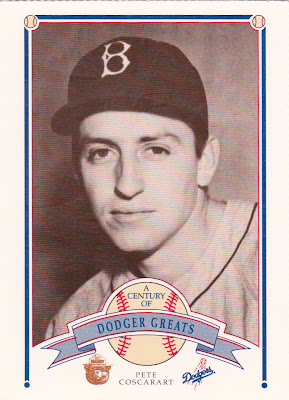 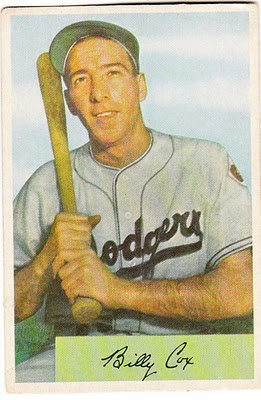 A couple of other players who went on to successful management positions also briefly wore the number during the 1940s. Gene Mauch and Al Campanis. 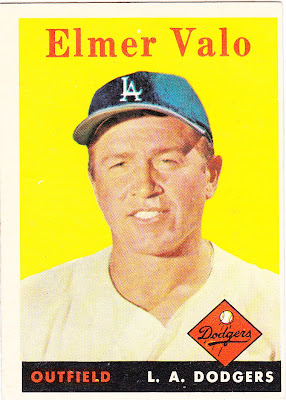 As the Brooklyn Dodgers became the Los Angeles Dodgers, the No. 3 had moved to the outfield. Elmer Valo, who had worn the number in 1957, kept it in 1958 as a backup corner outfielder. 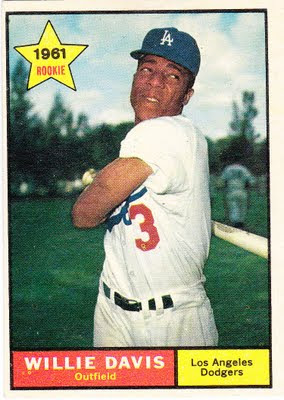 A promising young star took over the number in 1960. Willie Davis, the Dodgers' center fielder for a dozen years, made the No. 3 so much a part of him that his nickname was "3-Dog." He wore it until he was traded to Montreal for Mike Marshall after the 1973 season. 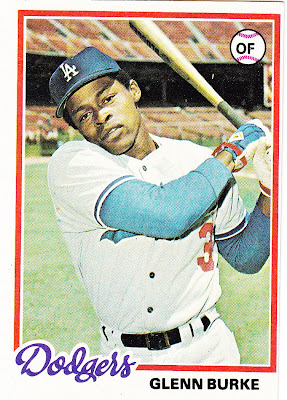 Glenn Burke, who like Davis grew up in California, took over the number in 1976. Burke is credited -- along with Dusty Baker -- with inventing the "high-five." 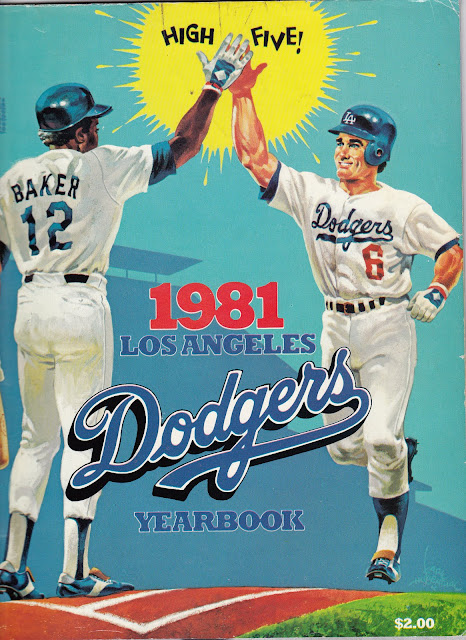 I read all about it in the 1981 Dodgers yearbook. It seemed like a strange theme upon which to base a yearbook.

The situation around the origination of the high five varies. The yearbook said it happened during the 1977 NLCS after Baker hit a grand slam against the Phillies. Burke came out of the dugout to congratulate him and since Baker was much taller, he put his hand up and the high five was born.

Other sources say it was after Baker hit a home run against the Astros on the last day of the 1977 season. Burke was the on-deck batter. And still other sources say the first high five didn't even happen in baseball. It happened in basketball.

In 1978, Burke wore the number until he was dealt to Oakland for Bill North. Then backup shortstop Enzo Hernandez, he of the horrid 1970s batting stats, owned the number briefly. 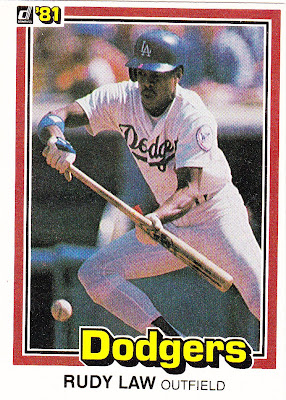 But by the end of the season, another speedy outfielder, Rudy Law, displayed the No. 3. I had high hopes for Law as a starting center fielder for a long time. But he couldn't stay in the majors while with L.A. After a modest 1980 with the Dodgers and a lost '81 season, he was dealt to the White Sox. 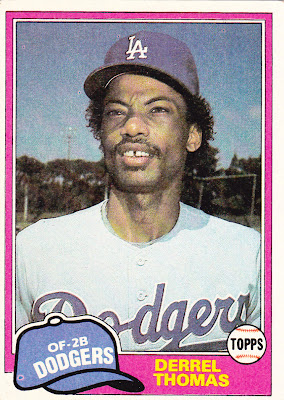 But after Law left for Chicago, the number was handed to someone who would feature the number longer than anyone besides Davis. 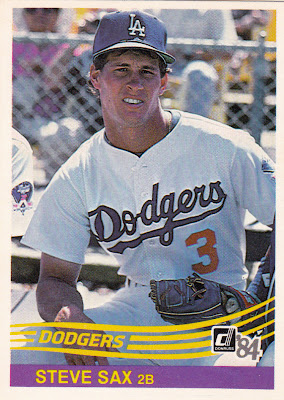 Steve Sax, the 1982 Rookie of the Year, featured the No. 3 from '82 through the Dodgers' last championship season in 1988. Through all the highs and lows -- and Sax had a lot of those with L.A. -- I never had to worry about the No. 3 falling into unsavory hands.

I can't say the same for the number since then: 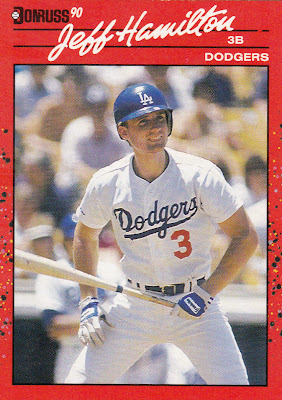 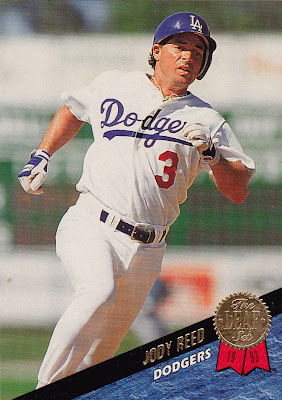 Jody Reed, 1993: A single, unmemorable season for the Dodgers. 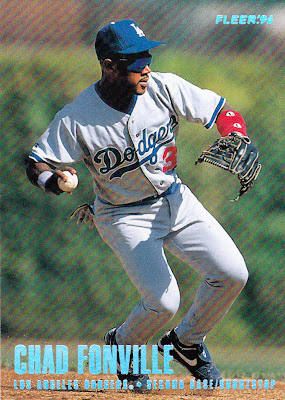 After career minor leaguer Eddie Pye acquired the number briefly in 1995, it landed on Chad Fonville, another utility infielder guy. He wore it in 1996 and 1997. 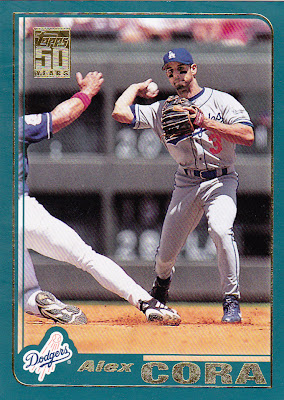 Second baseman Alex Cora, a player so popular with card companies that he was left out of dozens of sets around the turn of the millenium, wore No. 3 from 1998-2001. 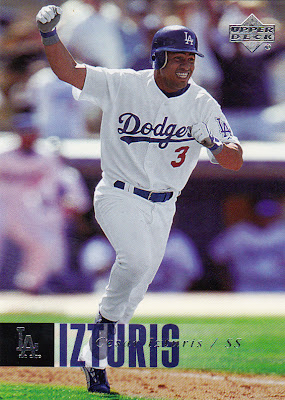 Cora moved over to No. 13 in 2002 and his double-play partner, Cesar Izturis, took the No. 3. Izturis was one terrific fielder, and eventually learned to hit --a little bit. He was such a good fielder that I had hopes that he'd stay with the Dodgers for the rest of his career.

Unfortunately, Izturis lasted only through 2006. And get a load of who has worn the No. 3 since then: 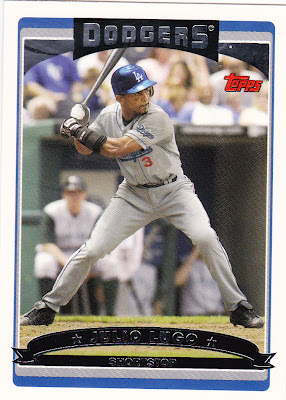 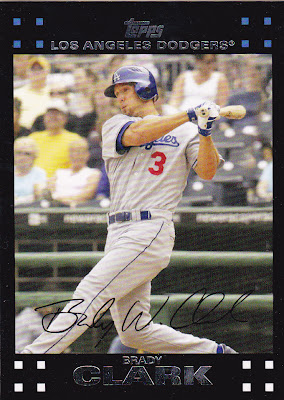 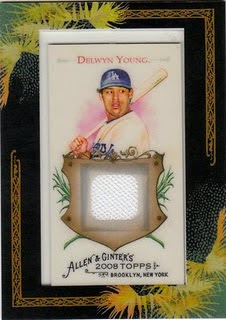 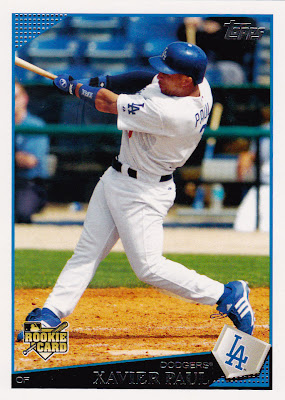 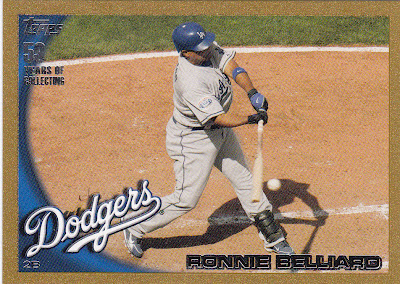 Today, the No. 3 is worn by Eugenio Velez, a former Giant. Velez took over the number after infielder Juan Castro retired after his third or fourth tour with the Dodgers. Castro's No. 3 was the fifth different uniform number he wore with L.A.

With the exception of Davis and Sax, the No. 3 might be destined for mediocrity in a Los Angeles uniform.

At least it invented the high five.

dayf said…
The Three Amigos was such a wonderfully stupid movie. They don't make 'em like that anymore.
September 14, 2011 at 10:43 PM

Andy said…
I hate that card, too.

I saw Three Amigos in the theater and haven't seen it since, and I had forgotten about that very funny scene. As a youngster when I saw it originally I don't think I really understood the homoerotic undertones.
September 15, 2011 at 12:29 PM

Greg Slomba said…
Great post, great movie! The Three Amigos is a classically stupid, hilareous movie. The number 3 hasn't been Ruthlike for the Dodgers, but that just means they're due for something better (sooner or later).
September 15, 2011 at 8:59 PM

Anonymous said…
Oh man. I haven't seen that movie in so long. There is no way I could possibly get Wife to watch it with me, so it looks like a Wife-works-this-weekend-movie.
September 16, 2011 at 7:34 AM