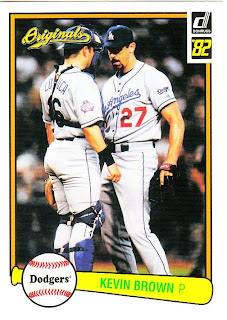 The Dodgers re-signed Vicente Padilla on Thursday to fill out their starting rotation for 2010.

Padilla did a nifty job for L.A. at the end of last season, but if I'm being honest I don't really like the guy. He's shown too many character traits that, to me, are in the "unacceptable" column. Just because he wears blue doesn't mean I have to like him.

That reminds me of another pitcher for the Dodgers I didn't like much. I wasn't crazy about L.A. pouring all that money on Kevin Brown when they signed him as a free agent. And I wasn't crazy about his less-than-enjoyable performance with the Dodgers. But his sour attitude didn't help. I was always a bit ashamed that he was a Dodger.

There haven't been a lot of players on my favorite team that I have out-and-out disliked. I remember being horrified when Darryl Strawberry signed with the Dodgers. I had spent every moment that Strawberry was in the major leagues wishing him the worst. And now he was on my team. He had his troubles with the Dodgers, too. But over the years I grew to appreciate him a little bit more as one flawed human being viewing another.

But other than those examples, I am usually willing to give my Dodgers the benefit of the doubt. I will root for them and believe they're at least semi-respectable human beings.

And that gets me wondering: do other fans find certain players who have competed for their favorite team distasteful? Or are you more the blind allegiance types? You know, like all those Giants fans who defended Barry Bonds even though it was plain as day that he was despicable in a variety of ways.

I'd be curious to know whether people have had difficulty rooting for certain players on their favorite team, either currently or in the past.

Field of Cards said…
When the Orioles acquired Sammy Sosa my reaction was negative. I never cared much for Sosa even in his prime. His persona always seemed very contrived to me. Mr. Nice Guy.
January 22, 2010 at 5:17 AM

Steve Gierman said…
I would love to invent a time machine so Carl Everett could see if dinosaurs exist. If they do, I get his 2005 World Series ring. If they don't, I'll admit he was right all along about that and only that.
January 22, 2010 at 6:09 AM

Play at the Plate said…
My favorite two ex-Rangers to dislike are the two guys you mentioned. Padilla, who I will admit did a good job for your Dodgers last year, and Kevin Brown. Give Padilla a chance to get comfortable and see how many times he gets Manny thrown at because he feels like throwing at the other team's players. He's NOT a team player. I never liked Kevin Brown which is pretty well documented on my blog.
January 22, 2010 at 6:18 AM

Matt Runyon said…
Originally I was happy when the Giants signed Bonds. But I soured on him after a few years and rooted for the Diamondbacks for the last 10 years of Barry's career. Now that Bonds is gone I can root for the Giants again. Kevin Mitchell was another one that I didn't really care for.
January 22, 2010 at 8:13 AM

Jim said…
As much I was glad to have him on the Phils throughout the '90s, I always cringed a little whenever Curt Schilling opened his mouth to speak.
January 22, 2010 at 1:03 PM