A win for the Rockies, a loss for Rockies card collectors (all 3 of you) 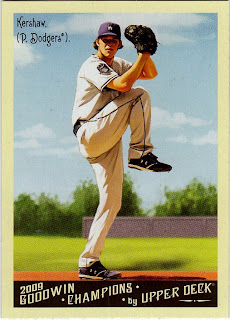 I can't believe I stayed up for that game. I was damn tired BEFORE the game started. But I tell you what, there is nothing more invigorating than destroying a Rockies card after those purple people beat my team.

(By the way, I will never get used to starting pitchers being pulled after 5 innings. Never).

So, the Dodgers lost 4-3. Their lead is now down to one game. And I knew it was going to happen.

You see, I bought a few packs of cards at Target tonight. Nothing special, because there's nothing thrilling out now. Just a few of this and a few of that. I bought another rack pack of Goodwin and I pulled the Kershaw card, and I thought that was very nice. A good omen for the game later on. But it turns out it was my second best pull of the packs.

This was my best pull of the packs: 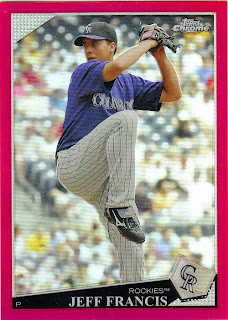 Yes, a freakin' RED refractor, numbered to 25, of a ROCKIE. Dammit! I realize it's a Rockie who hasn't played a single inning this season and won't be back until 2010, but a RED REFRACTOR? I've never pulled a red refractor of anyone, and certainly not out of a loose retail pack.

Well, that just solved it. I was destroying a Rockie card tonight (no, not the Francis card), because the Rockies were surely going to win after that. And you remember who was on the chopping block, right? 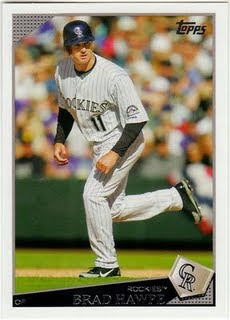 Brad Hawpe. Poor, Brad. He didn't even get into the game tonight. Sorry, buddy. You've got to take one for the team.
Now, I had planned to stick to the "Wreck This Journal" book for the destroying possibilities. But I had enjoyed some of the suggestions in the comments of the previous post, especially the blender suggestion.
So, after the game, I went digging in the kitchen cupboards for the blender. But I couldn't find all of the parts. I'm not terribly handy in the kitchen, so that wasn't a surprise. But I sure as hell wasn't going to wake up my wife to ask her where the blender was and then tell her why I needed it. That certainly would have been a new low in our relationship.
So, while digging for the blender, I noticed the dirty dishes up on the counter above where I was sitting. And I thought, I might as well do the dishes. I could use some ruminating after going through game agony. And just for kicks, why not do the dishes with the Brad Hawpe card?
So I did. The card did a fantastic job. The dishes are in sparkling shape. The card, however, is not. It kind of fell apart by the time I got to the silverware. And fishing for the pieces after I was done was a bit difficult. I found most of them, though.
After I put it together and dried it off a little bit, this is what it looks like: 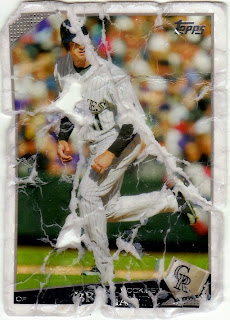 Pay close attention Rockies. Do you want this to happen to you? Who knows what sinister plot I have for a Rockie in the event that you tie the Dodgers for first place tomorrow? Make it easy on yourselves. Lose tomorrow night. You're going to the playoffs anyway. Avoid some carnage.
All right, I've got to get some sleep after that. Good night for now.
Oh, and Ramirez and Blake, this is for you: 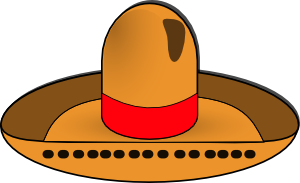 Wear it with shame. And do better tomorrow.

Unknown said…
Here's a fourth Rockies fan. I'm quite glad you were forced to swallow your emotive words, even if you admitted they were just that - emotionally driven.

Anyways, you shouldn't call the Rockies "Purple People" as they have not worn their purple alt. in almost three years.

Play at the Plate said…
You're already in this thing for the expense of the packs and the value (ha) lost on the Hawpe card, which I'm sure is a 1/1 now! So, you should fly out to the game and place that card on top of the Rockies dugout as a curse on them and all future Rockies. If that doesn't work you may want to "wash" a couple Ramirez and Blake cards....
October 3, 2009 at 9:41 AM

jacobmrley said…
I would offer to trade your Red Refractor to get it out of your sight, but the red ref. I pulled from my box was Troy Tulowitzski. kind of a lateral move...
October 3, 2009 at 10:57 AM