More to the story 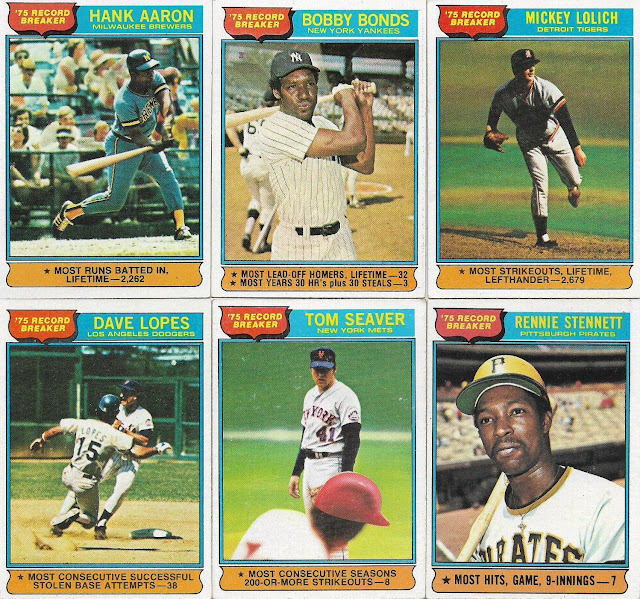 The best version of the record breakers/highlights subsets that Topps churned out each year during the 1970s and 1980s is -- without a doubt -- the 1976 Topps record breakers.

Part of the reason I feel this way is because it's the first time I realized what Topps was doing with this subset. When I collected the '75 set, I consider the Kaline and Ryan "highlights" as just another card. But no, in 1976, I knew: Topps was recounting great feats from the past season!

But the other reason the '76 record breaker set is the greatest has nothing to do with me -- it has to do with the backs of the cards.

Yes, I said the backs of the cards.

I'm going to make you look at the backs.

No whining. Your life isn't that difficult. You can read a card back.

The backs are unlike any other Record Breaker or Highlights subset ever issued by Topps. And that's because Topps used numbers to support its words. Real, live, interesting statistics.

I'll show you, card by card. 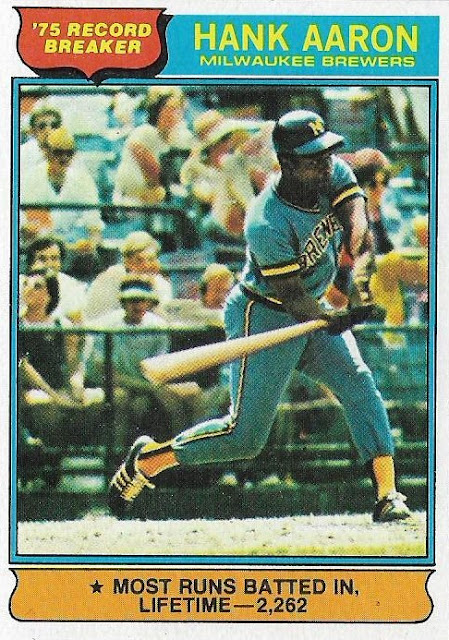 Reason for the card: Hank Aaron set a record for the most career runs batted in. 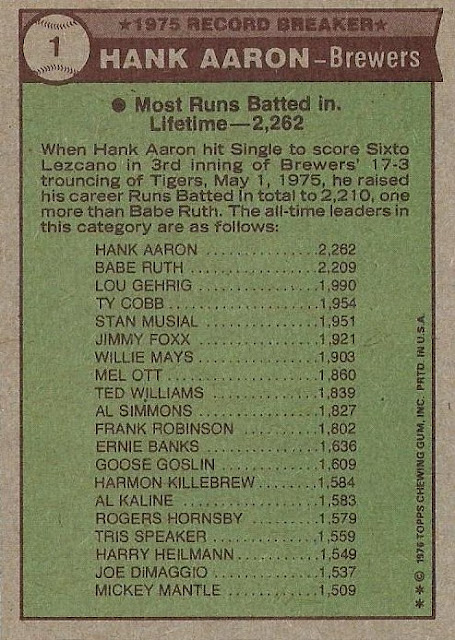 Along with a blurb of Aaron's record-breaking achievement, Topps lists the all-time RBI record-holders to that point. All of those 1976 card-collecting fans were now smarter for knowing that Harry Heilmann was 18th all-time in runs batted in. 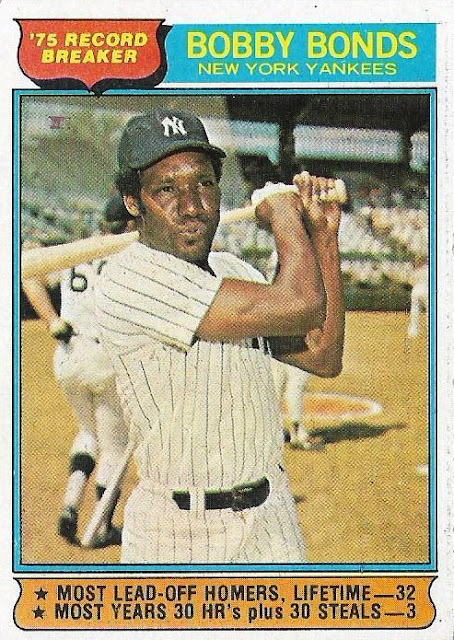 Reason for the card: Bobby Bonds set a record for most lead-off home runs in a career and a record for the most 30-30 seasons. 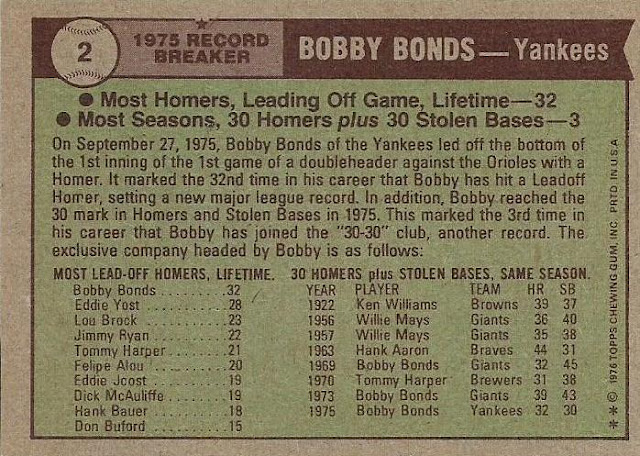 Topps lists both the most lead-off home runs in a career (I'd love to see a current version of this list) and all of the times up 'til then that a player hit 30 home runs and stole 30 bases in a season. That's going the extra mile right there and certainly appreciated, even in this baseball-reference era. 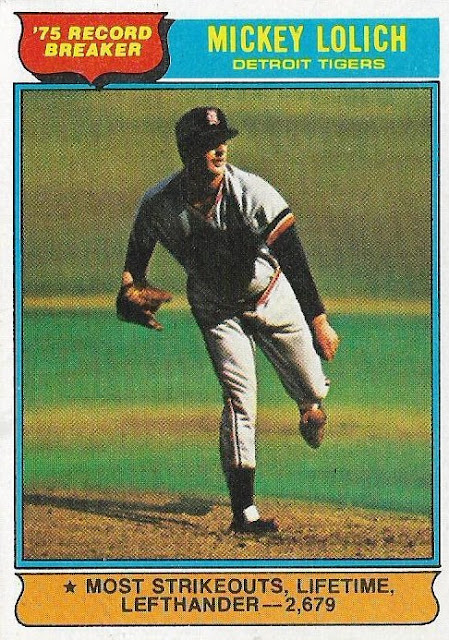 Reason for the card: Mickey Lolich broke the record for career strikeouts by a left-handed pitcher. 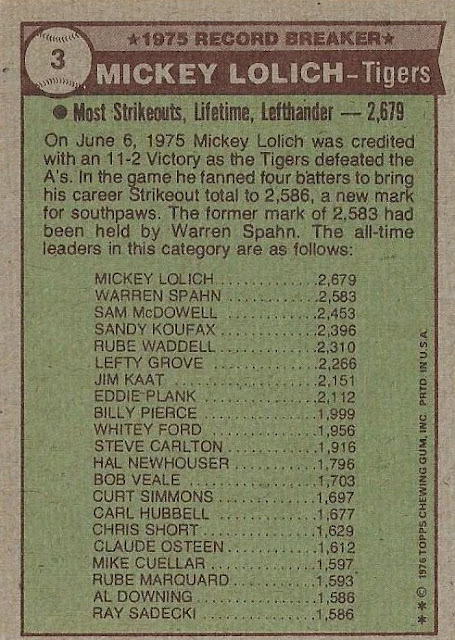 There is the blurb and then a list of all the top lefty flame-throwers in MLB history at the time. Even though this list is totally different than the current list, it's still fascinating to read. 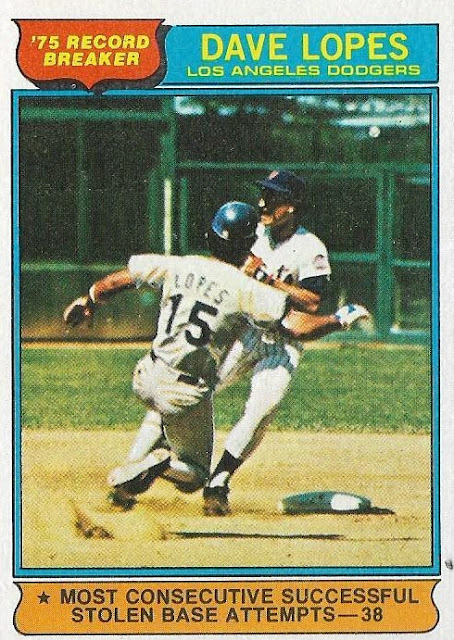 Reason for the card: Dave Lopes set a record for the most consecutive stolen bases. 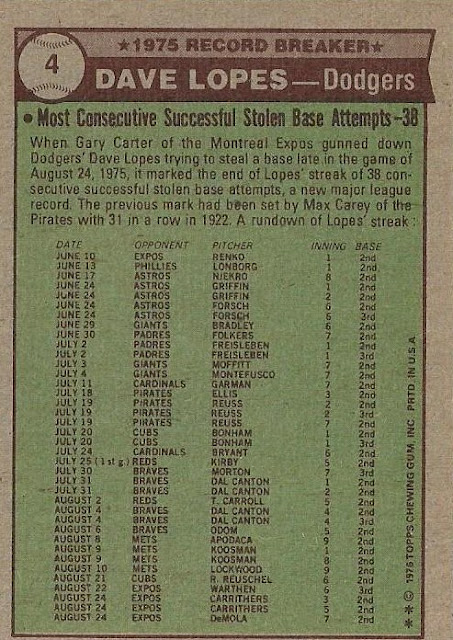 I loved this card back as a kid. Look at that research! No internet to lean on here. I'm not sure how Topps tracked this down: The Sporting News? Newspapers? The Dodgers? But it's great. For every stolen base you know the date, the opponent, the pitcher, the inning and the base! 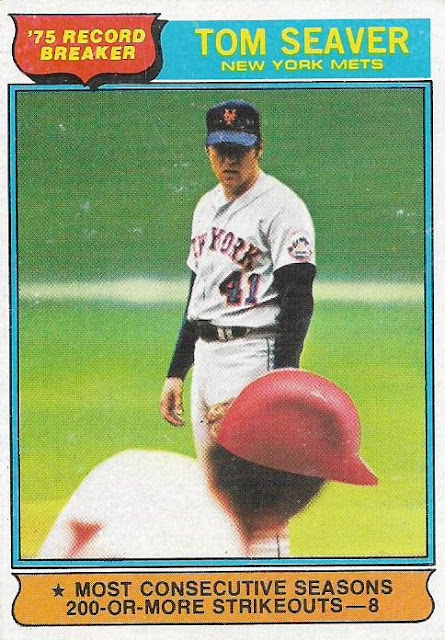 Reason for the card: Tom Seaver set the mark for most 200-plus strikeout seasons in a row. 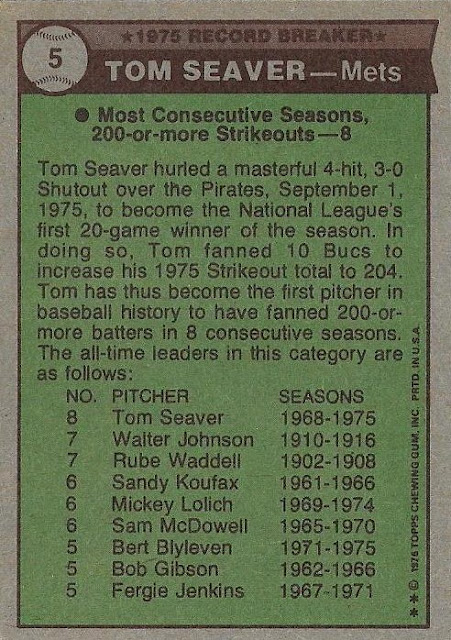 While this card gets a lot of attention for the weirdly airbrushed helmet on the batter in the photo, I'll focus on the back, which gives a rundown of the most consecutive seasons with 200-plus strikeouts. I'm sure this was new information for a lot of people. 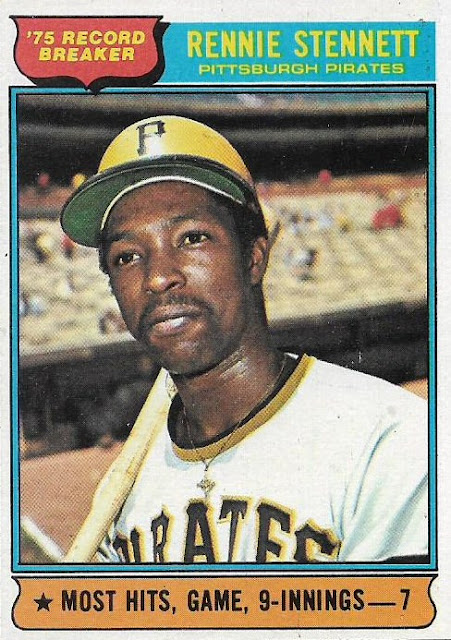 Reason for the card: Rennie Stennett went 7-for-7 in a nine-inning game. 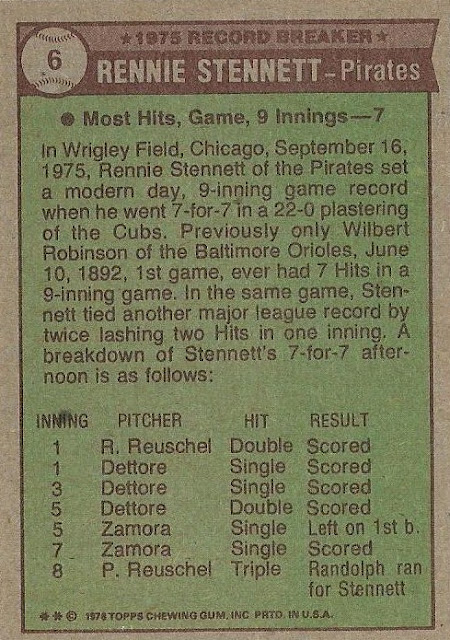 This was fascinating to me when I pulled this card.

I remember reading about Stennett's amazing performance and the Pirates' 22-0 victory in the paper. To get a rundown of Stennett's seven hits, inning-by-inning WITH his result was very satisfying.

That is why this is the best record-breaker set.

And, why, it underlines the poor excuse for some Topps' card backs today, especially those online cards. 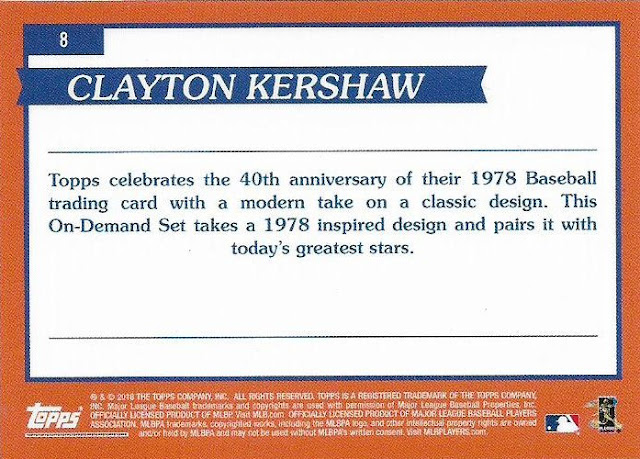 Base Card Hero said…
These are great. I wish Topps still took the time to put this stuff on the backs are cards. It's all irrelevant now. The backs of All-Star cards used to give fun information too. Not anymore.
October 8, 2019 at 8:55 PM

Old Cards said…
I like reading card backs. Isn't that what separates collectors, like all of us,from investors?
October 8, 2019 at 9:05 PM

Johnnys Trading Spot said…
I check out every centimeter of a baseball card. Trying to find any reason to keep a dupe.
October 8, 2019 at 10:44 PM

Mike said…
Very fun recap, particularly given that the 1976 set is one of which I had only previously seen the front of stray cards.

The Bobby Bonds card immediately made me think of the Season Highlights card from when Rickey Henderson broke the leadoff HR in the 1989 season. While the back did its best to emulate a newspaper report of breaking baseball news, it certainly pales in comparison to what was offered on Bonds' card.

Brett Alan said…
It’s certainly a big thing for me. I love going through my latest card show haul and reading everything there is to read on them.

The Snorting Bull said…
I never realized they made a Lopes card for his consecutive stolen base record. I remember it getting broken by Vince Coleman at some point in the late 1980s, which was controversial because his streak was over two seasons. I agree these cards have great backs.
October 9, 2019 at 6:20 AM

BaseSetCalling said…
These cards awed me as a kid as well. As a Pirate fan then, the Stennett card was a treasured possession. It also seemed to me that Seaver struck people out by simply staring them down into submission.

One of my favorite pulls from the Topps re-insertion program of a few years ago now was a stamped copy of the Lopes card. Was so nice to see it appear in a pack of baseball cards again.

Some new card backs are better than others. I quite look forward to reading all of the backs in 2019 Archives, for example.
October 9, 2019 at 9:16 AM