October 06, 2019
(I just kicked off a week of vacation with a card show. I don't know how I managed such a magnificent opener, it certainly wasn't by design. But I'm really happy about it. So let's pause for a little Cardboard Appreciation. This is the 285th in a series): 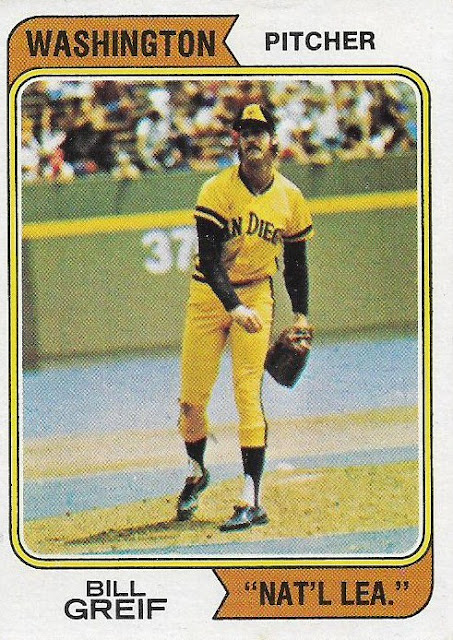 My 1974 Topps set has been complete for quite some time.

I've considered it complete even without any of the famous "Washington, National League" variations created for some of the San Diego Padres cards.

As you no doubt recall, or like me have read, the Padres were rumored to be moving to Washington in 1973. Topps panicked and created variations for 15 of the Padres cards that replaced the "San Diego" and "Padres" wording on the flags with "Washington" and "Nat'l Lea.," creating a phantom team because the Padres never moved there. A Washington MLB team would not become a reality until 30 years later.

I had read about the Washington variation cards early in my collecting days, probably when I was just getting into collecting other cards besides what was on drug store shelves. They were interesting to me, but I didn't consider them necessary.

That feeling remained as variations became a significant part of the collecting hobby. From the 1979 Bump Wills, through the 1980s error frenzy, the 1990s chaos and then the artificial-scarcity era that continues to plague us.

Still, I resisted those 1974 Washington cards.

I don't know why. I think it's that I consider "variation collecting" a modern, post-1970s phenomenon. It just doesn't seem like the thing to do with cards from the '70s or earlier.

I was at a card show this afternoon, going through a quarter box (the discount box theme will run throughout tomorrow's card show post). This particular box was quite promising because this dealer's inventory is almost exclusively vintage.

I immediately put it in my stack. Hell, I can be convinced to buy almost anything for a quarter.

Once I moved the Roberts variation into the pile, I saw another '74 variation, this time Bill Greif.

I liked that one more. So I put that one in my stack, too.

Upon totaling up the cards for the dealer and paying, I discovered that the Roberts card was no longer in my stack (the discounts were flying fast-and-furious and it was difficult to keep track).

It didn't bother me too much. I kind of like having a "type card" for this variation and ending with that.

Most likely, though, I won't end with just that one Washington variation. Especially if I come across another one for a quarter.

And that wasn't the only card that I was surprised to see for just a quarter or 50 cents or a dime.

Charlie Sands said…
I sold a John Grubb for $8.00. I believe it was his rookie card though :)

Mike the History Teacher said…
Your mention of four players named Dave Roberts made me wonder what name is held by the most MLB players. I probably could Google it to find out, but I decided to spend some time on B-R instead. I didn't get an answer, but I was surprised to learn that the four Dave Robertses unofficially tie the four John Smiths (including 19th century pitcher Phenomenal Smith.) But to be fair, there were four other players who were born John Smith but who played under a different first name -- including Dwight Smith Jr. and Sr.
October 7, 2019 at 7:21 PM