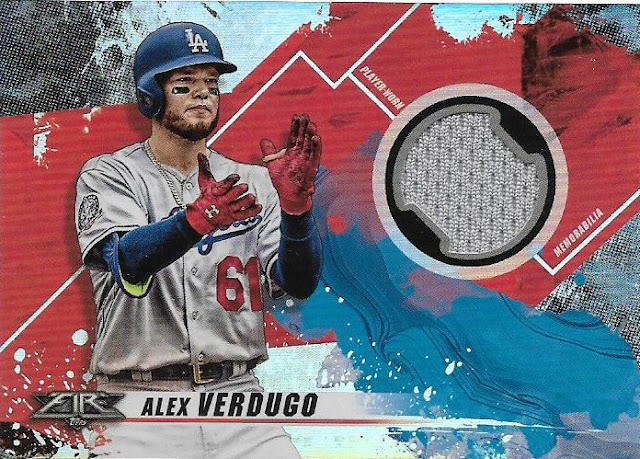 I entered one of Sports Card Info's many card contests a couple of weeks ago.

Andrew's been holding these giveaways for probably as long as I've been blogging, but I rarely enter. Plus, it's one of those deals where if you comment on the post every day, you have a better chance of winning, and I never remember to comment more than once.

My forgetfulness didn't matter this time though and I won the above Alex Verdugo "player-worn memorabilia" card!

My enthusiasm aside, I think we're all past relic cards these days. The peak era for relics probably ended almost 10 years ago, and ever since we've been accumulating them absent-mindedly, knowing that they're probably not legitimate, a victim of our habits and nostalgia and ... I don't know, a difficult-to-shake fondness for laundry bits, I guess.

I never go out of my way to obtain a relic card. Even when they were "the shit," as the kids-who-are-now-adults say, they were never a priority.

But it's always been an unspoken goal for me to obtain at least one relic card -- whether it's laundry or a wood shard -- of every Dodger player available.

This is a very arbitrary exercise because you're at the whim of the card company's methods -- who they think will sell in relic form and who they are able to obtain in relic form. It's not like collecting autographs where you could conceivably get a signed card of every Dodger player, whether the card company has anything to do with it or not, because all you need to do is have the player sign a piece of cardboard at some point in time.

One is the time when I rooted for the Dodgers as a kid. I have relics for most of the main players from that time. The laundry of Steve Garvey, Ron Cey, Davey Lopes, Bill Russell, Dusty Baker, Reggie Smith, Don Sutton and Burt Hooton all resides in my collection.

There are also relic cards available for others from that time: Tommy John and Steve Yeager, most notably.

But because these players' careers landed outside of The Relic Era, other notables from that time do not have relic cards, at least none that I can find. Doug Rau, Rick Rhoden and Joe Ferguson were all starters and contributors to those playoff teams but try to find laundry of them. Same with Andy Messersmith or Willie Crawford or Lee Lacy.

One of the reasons for this is the Dodgers are relatively young with lots of players barely established in the card world, such as Will Smith, Matt Beaty and Gavin Lux. Another reason is Cody Bellinger hoarding. There are relics of Bellinger out there but a number of them are too pricey, which is ridiculous for clothing bits.

But why don't I have relics for Justin Turner or Max Muncy or Hyun-Jin Ryu or Walker Buehler?

Lack of enthusiasm is one reason. The Relic Era is over, you know. But also, the enthusiasm for creating relics has lessened, too. Most relics of the guys I just mentioned are either Panini cards (yawn) or All-Star jerseys (ugh).

This is why my Dodger relic collection will never be truly representative of "every player " to play for the Dodgers. Topps can't even produce a relic card of Steve Sax or Kiké Hernandez before we even get to forgotten players like John Hale or Ralph Bryant.

But that examination aside, let's look at a laundry list (with some wood bats thrown in) of all of the Dodgers for which I have relic cards for, with Alex Verdugo now added to the list: 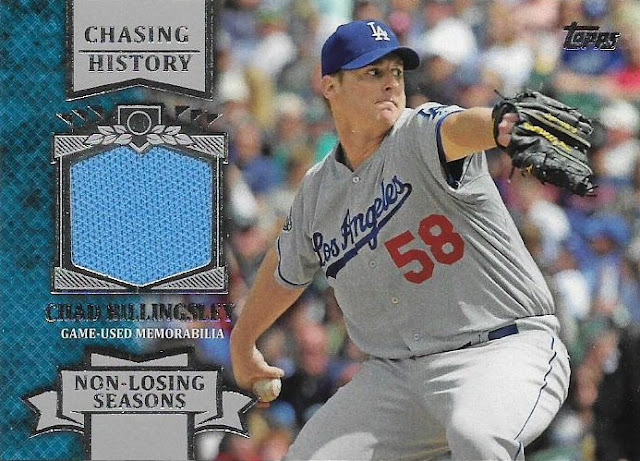 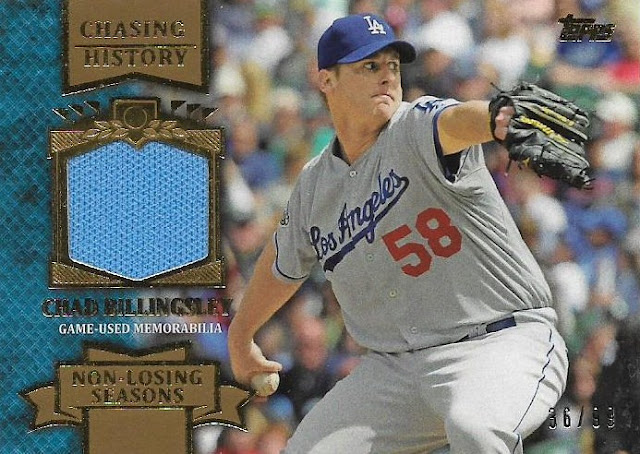 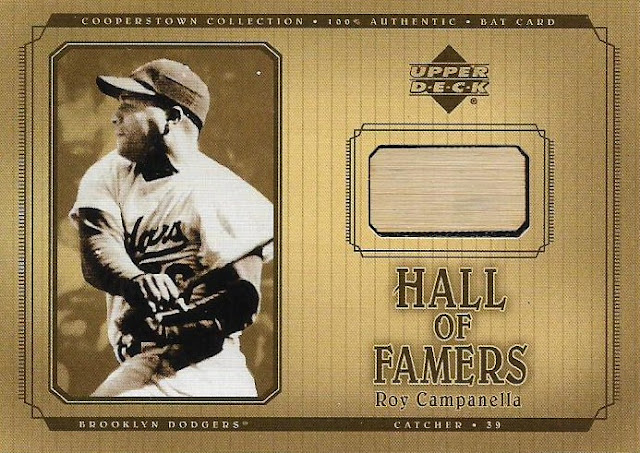 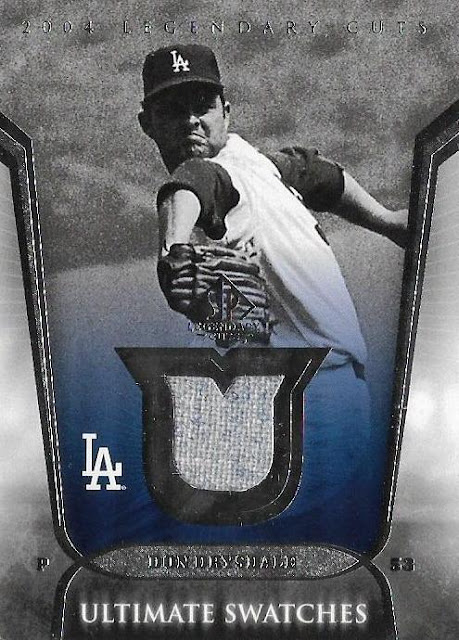 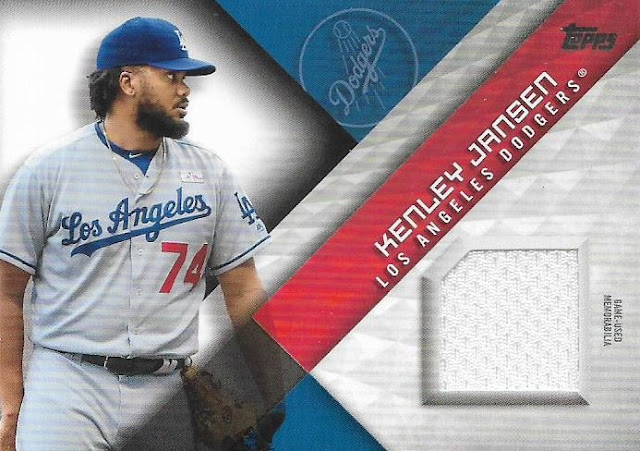 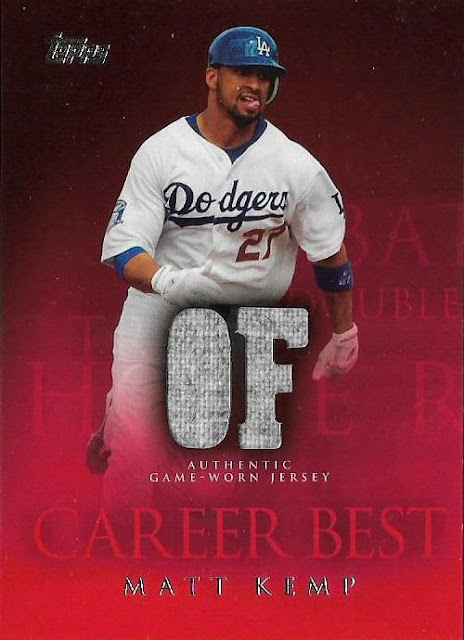 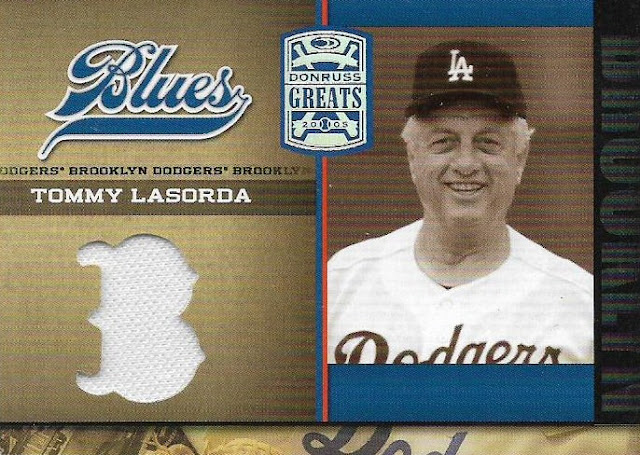 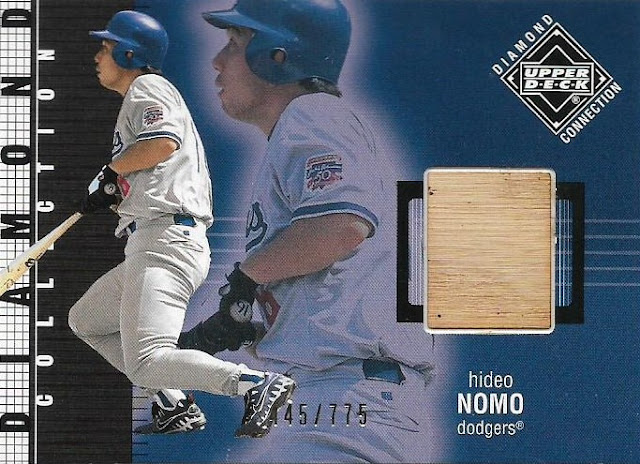 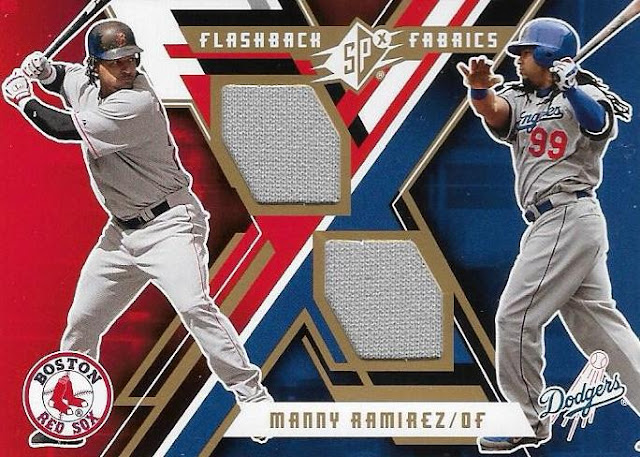 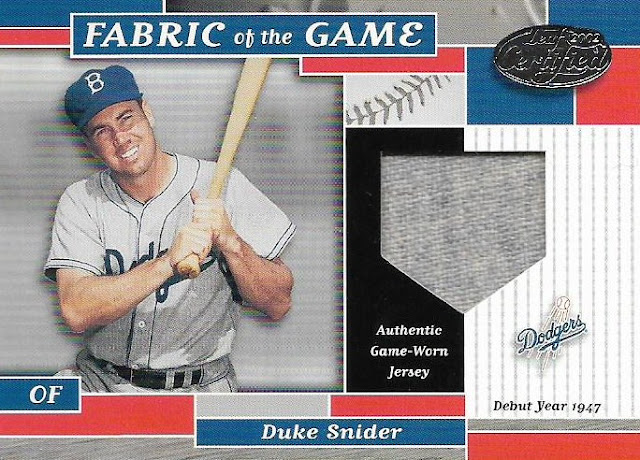 Verdugo was officially the 80th Dodgers for whom I have a relic card.

Obvious holes in this collection are some of the players I mentioned above, as well as 1960s standouts like Willie Davis and, of course, Sandy Koufax.

But the list seems finite and if I ever put my mind to it, I could probably track down one of every available Dodger player with limited trouble.

If I was able to do that, I could probably dismiss many of my "repeat relics" -- the 15 Shawn Green relics and the, my god why do I have five J.D. Drew relics???

But I'm probably never going to commit to it. I'll just gather them as I may, never thinking too much about them. In fact, maybe if I hit 100 Dodgers, I'll stop, because space is always at a premium.

And we all know all those relics are just some Topps executive's socks.

Base Card Hero said…
I could care less if the "relic" is actually game used. It's just another insert to me. As long as the card looks good to me, I can dig it.

Fuji said…
Although The Relic Era has come and gone... I still find myself enjoying them and seeking them out when I hit up card shows and flea markets. The only major difference is I'm not willing to shell out more than a few bucks for anyone except hard to find hall of famers (like Jackie Robinson and Roy Campanella). 80 different Dodgers is pretty darn impressive. I bet I only have 25 to 35 different A's laying around.
October 20, 2019 at 9:43 AM

The Snorting Bull said…
I agree with the sentiment that they are just another insert card at this point. Most collectors know they are not game used, but there are still a few relic cards out there from over the years with really great designs, or they were fun to collect at the time they were released. I am curious about how many unique Durham Bulls and Cardinals players I have in relic form. 80 is a lot.
October 20, 2019 at 4:41 PM

Henry Blanchette said…
I still enjoy purchasing Red Sox and Cubs relics, mostly because of how cheap they are now that the autograph is all the rage. I'll even purchase relics of teams that I don't collect because of the low price point. Willie McCovey relics for $2 each? Say no more.
October 20, 2019 at 7:06 PM