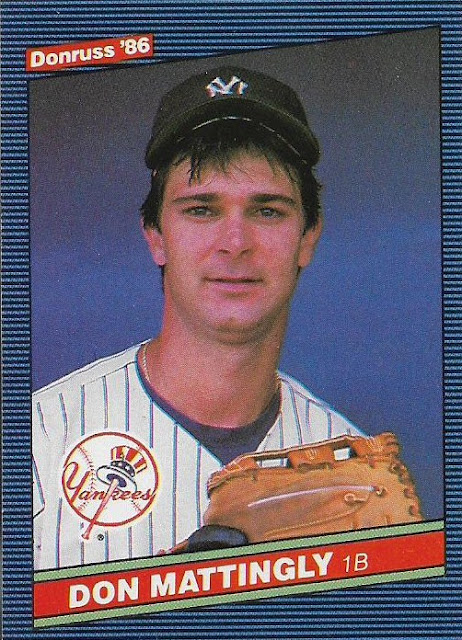 I was perhaps a little harsh on the Yankees at the end of yesterday's post.

Not that I care -- still fully want them to lose by many runs tonight -- but I'll throw a tiny chicken bone their way.

I visited my favorite thrift store back in my old hometown Monday. It hasn't been very productive for baseball card hunting the last several visits, but I did find one station that had the usual selection of junk wax sets (the Big 3: 1990 Fleer, 1990 Upper Deck, 1989 Topps).

Above those boxes were a few individual stacks selling for a couple of bucks each. I brought home two that mildly interested me. One was a 1983 Fleer stack with Keith Hernandez on top. The other was a 1986 Donruss stack with Don Mattingly on the top (third-year cards are so underrated).

I thought they were random assortments of '83 Fleer and '86 Donruss, but it turns out they were team sets of the Cardinals and Yankees from those years (I didn't put two-and-two together as there was a Cardinal and a Yankee on the bottom of each respective stack). I selected '83 Fleer because I'm trying to complete it, but the only card I needed was the Darrell Porter.

I selected the '86 Donruss because I own fewer cards from that set, by far, than any other set issued in the 1980s by the major card companies. I have an excuse -- I find the design very disorienting -- but it's time to overcome that.

After all, I now have the full Yankees team set from 1986 Donruss and I can do a Joy of a Team Set post on it!

Here is the whole team: 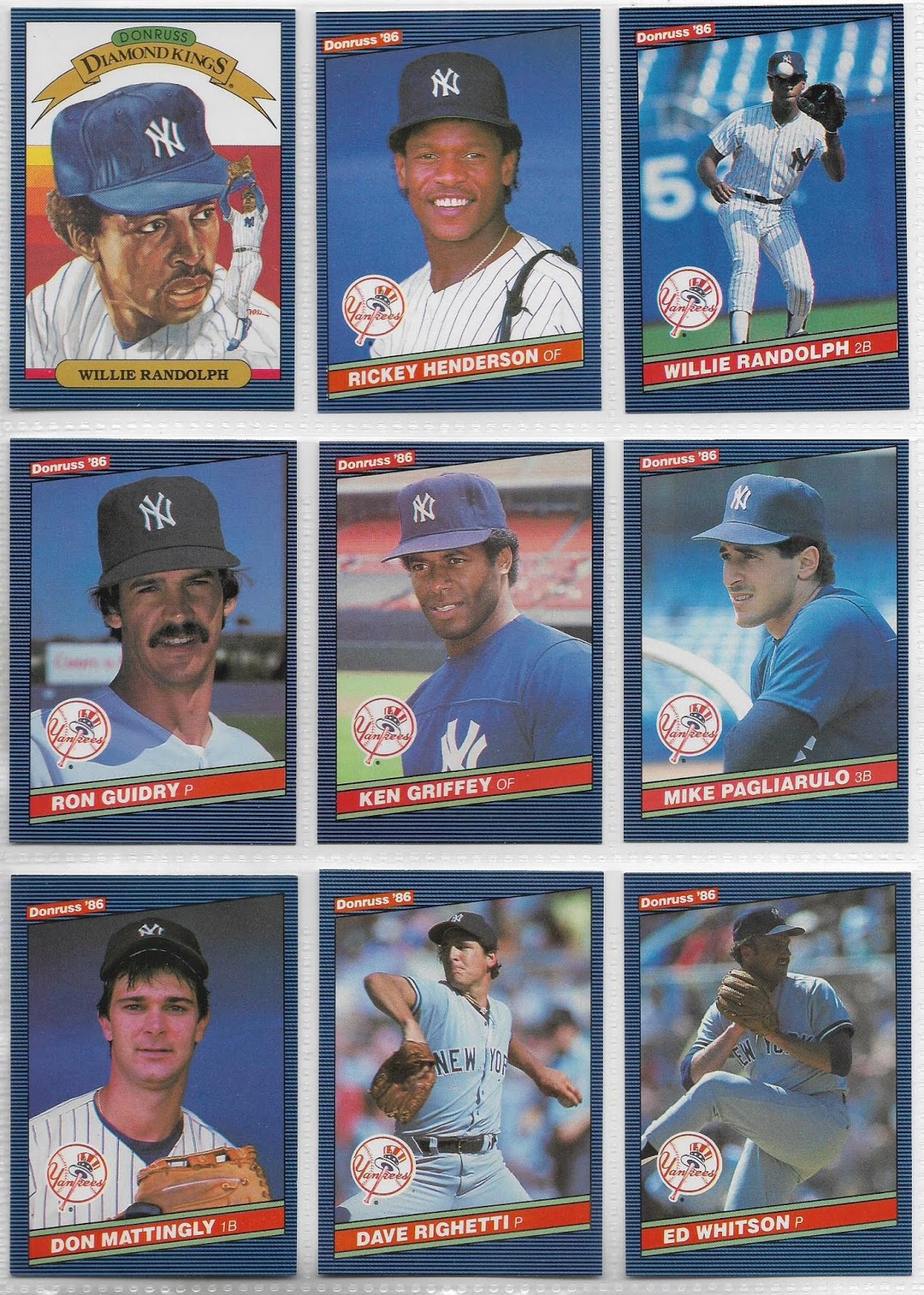 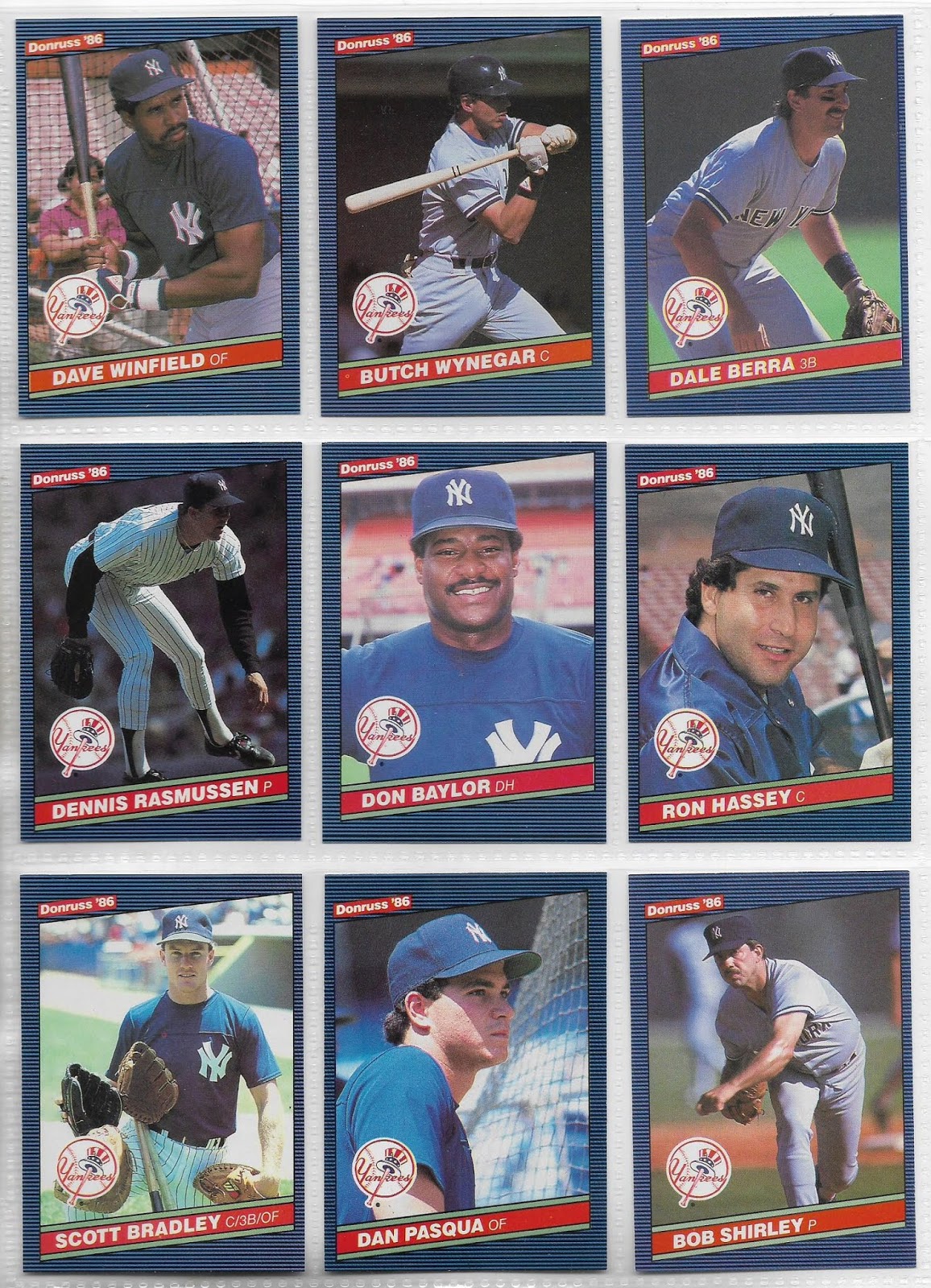 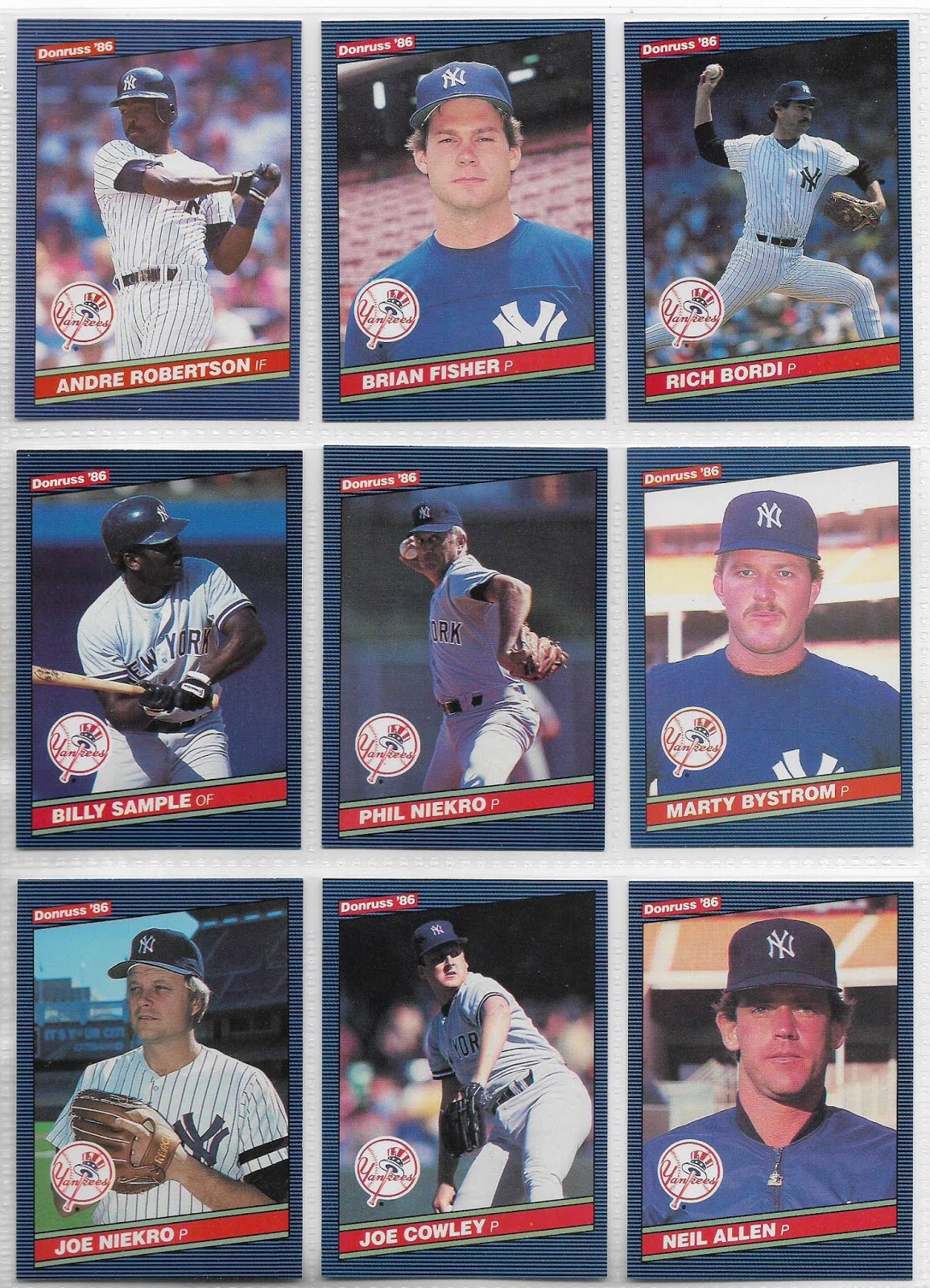 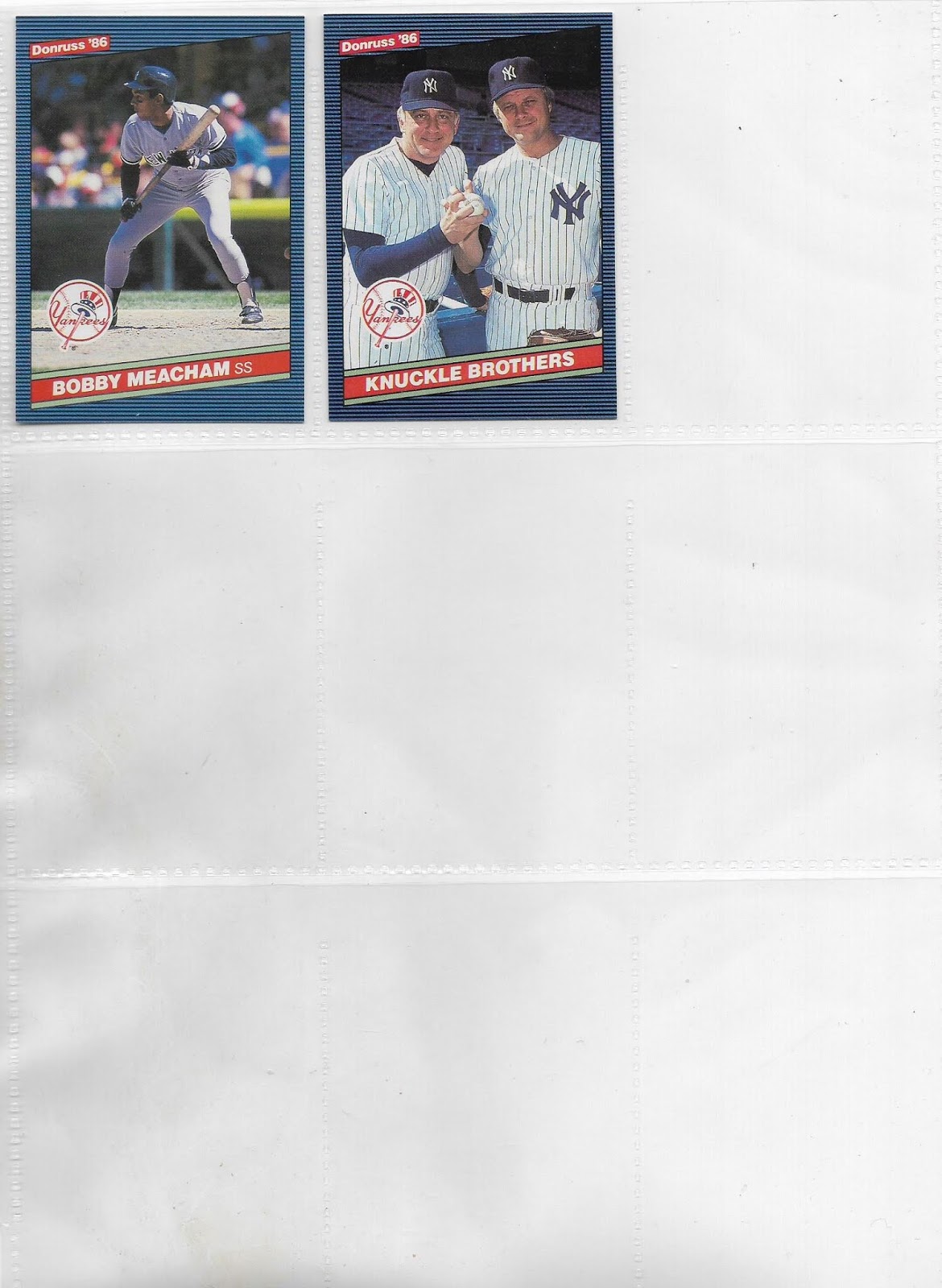 Donruss kind of front-loaded the stars in this team set.

This Yankees team holds a special place in my heart because it was the start of a wonderful decline by the franchise. New York finished second behind the Blue Jays in 1985, then finished second again in 1986. After that it was fourth, fifth, fifth, seventh, fifth and fifth. It was glorious. I could live my life without anyone shouting in my ear about the greatness of the Yankees.

But enough of that, it's time to run through the team set categories: 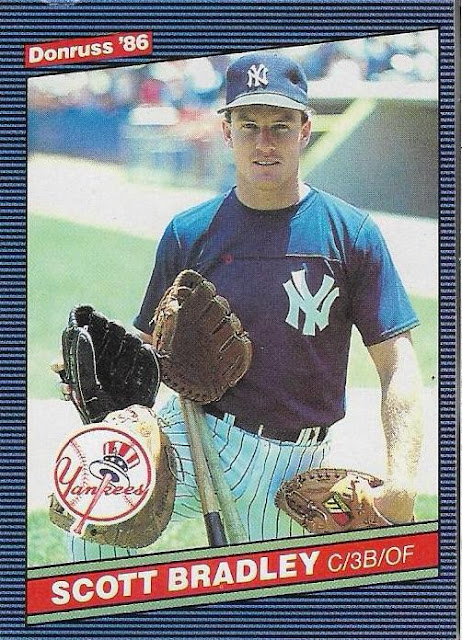 This could have been first if Donruss didn't obscure the fourth glove with the team logo. Come on Donruss, you can move those things you know.

Team's claim to fame: The 1986 Yankees were the first in franchise history to finish second behind a Boston Red Sox team since 1904, when the Yankees were the Highlanders and the Red Sox were the Americans. 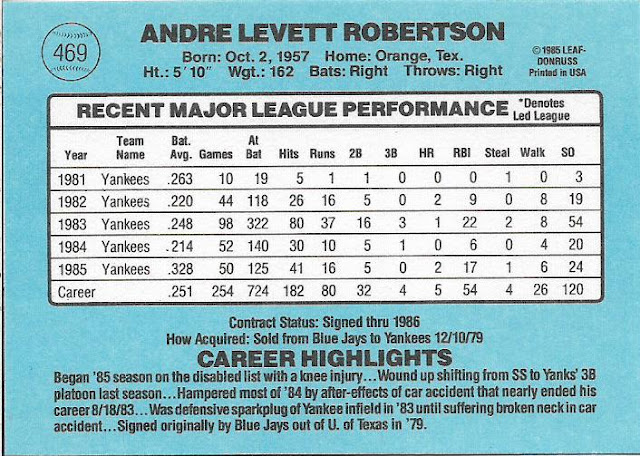 There are a lot of tales of injury hardship on the back of these Yankees cards -- Marty Bystrom's is one long litany of woe -- but Andre Robertson takes the pinstripe cake. Donruss alludes to the severity of Robertson's car accident and then spells it out it for you -- broken neck, yikes!

Players I've talked to: Both Phil and Joe Niekro in two wonderful phone conversations in a single day. Joe first and then Phil.

Best names: Donruss provides gold with their listing of full names. Here are my five favorites:

Famous error card: The 1986 Donruss set doesn't have many errors and none involving Yankees.

Phil Rizzuto was their number one fan: 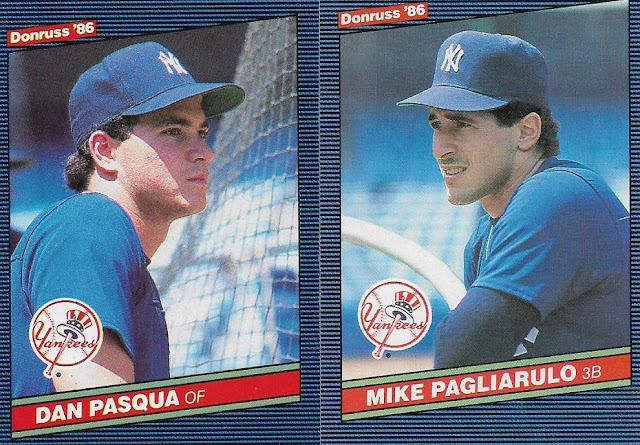 Favorite card in the set: 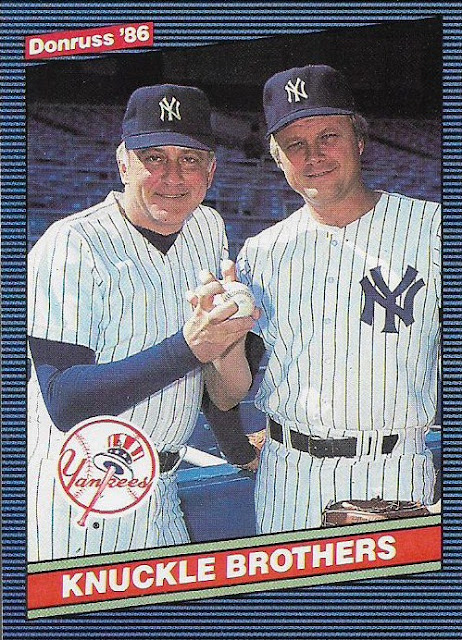 This is how you do a combo card, Topps. I miss these so much.

Naturally I'd pick the two guys I've interviewed. It helps that I consider neither of them Yankees, thinking of Phil first as a Brave and Joe first as an Astro.

Thanks for joining me for Joy of a Team Set!

May it kick off 10 years of the Yankees never making the postseason!

John Bateman said…
From my recollection the Mid-1980s Donruss sets used to front end most of the stars in the set. (i.e. most of the best players ended up after the Diamond Kings)
October 17, 2019 at 8:57 PM

Fuji said…
The Knuckle Brothers card is awesome! I'm trying to think of the other combo cards in that set. Only other one that comes to mind is the Fleet Feet card with Coleman and McGee.
October 17, 2019 at 11:00 PM

Jamie Meyers said…
As is often the case with these posts, you got me thinking of which players I have met. The list is longer than I would have guessed: Scott Bradley, Bobby Meacham, Ron Guidry and Don Mattingly. I disliked those 80's team greatly because, well, I'm a Red Sox. As such, it griped me somewhat that Mattingly was really friendly. Bobby Meacham was very graceful when discussing his playing days in the Bronx, considering the hack job George Steinbrenner did on him. I will give honorable mention to Billy Sample for my list as he was at a Binghamton Mets game I attended and I probably crossed paths and said hi to him. I later wrote to him asking for his autograph, including his '86 Donruss in my letter, and he wrote back referring to why he was there. So that kind of counts. I have the Meacham and Sample cards signed.
October 18, 2019 at 12:08 PM