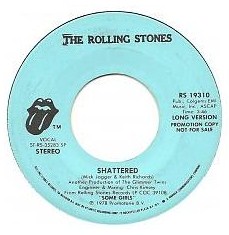 I've been closing in, working on and completing a bunch of different sets lately.

This makes me happy because I consider this very productive baseball-card-collecting behavior.

But sets? When I'm zeroing in on sets, I feel like I'm reaching my GOALS!

I'm pretty thrilled trying to complete those sets all by myself. I couldn't be happier. You know, laughter, joy and loneliness and ... sets, sets, sets, sets!!!! That's what the Stones were singing about, right?

Anyway, one of those set-completion missions is trying to get the 1991 Score baseball set finished off as quickly as possible.

A few collectors have sent a bunch of cards in a bid to finish it off as quickly and painlessly as possible. Bo, from Baseball Cards Come To Life!, has been the latest one. 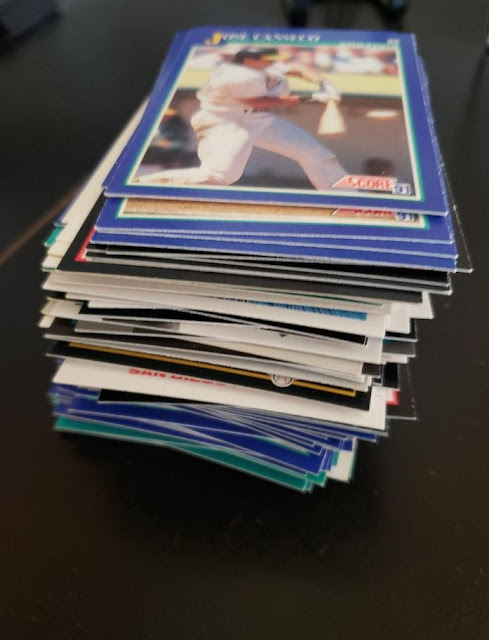 I'm not going to show all the cards individually because everyone knows them and has seen them enough times to last a lifetime. But here are a few highlights: 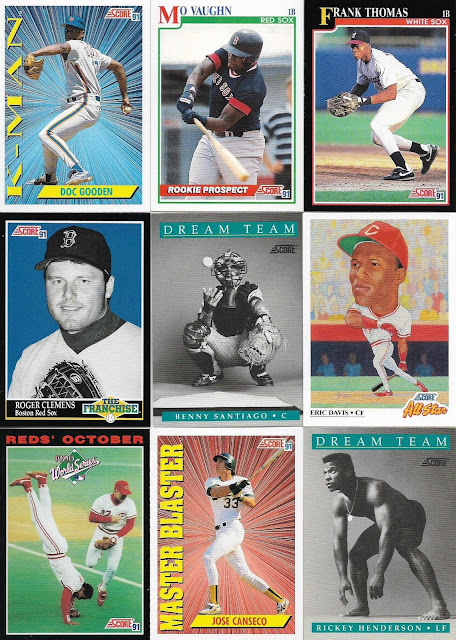 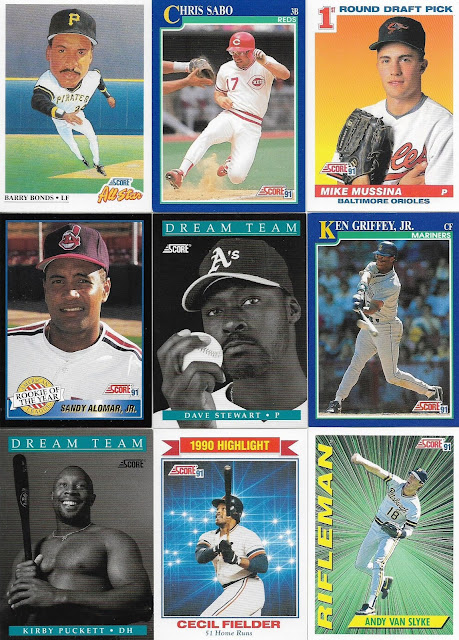 I think you can see why I'm trying to complete it. It's really not about the regular player cards. It's about all those subsets.

Also, since it's October, here's one of the plain most unsettling cards that I've ever viewed: 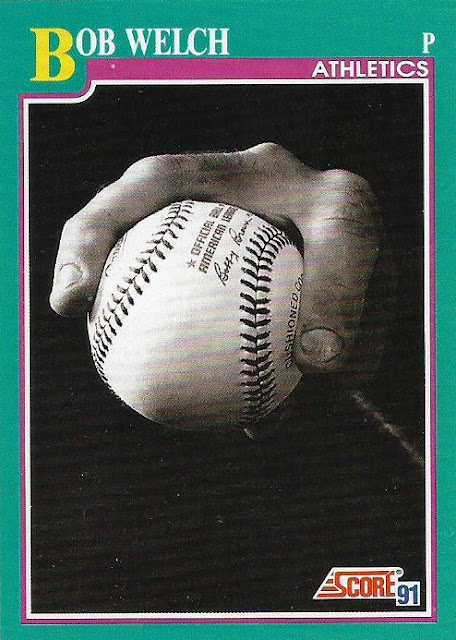 I still don't know what possessed Score to do this, but I'm both impressed and admire them for it and also wish to heck that they hadn't gone done it.

All of the cards that Bo sent has gotten me pretty close to finishing the 893-card set. I know at least one other collector is trying to throw some '91 Score at me so here are the last numbers that I need:

But, that isn't the only set I'm currently working on, of course. There are some more pressing matters and Bo helped with those, too. 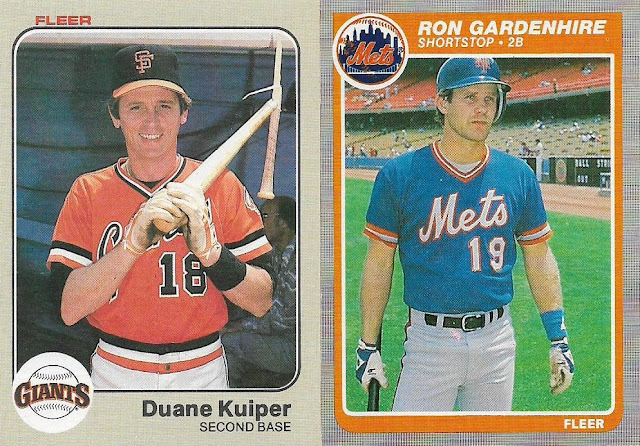 One card each from the 1983 and 1985 Fleer completion quests. You've got to love that broken bat Kuiper shot, perhaps a commentary on his periodic weak-hitting ways. 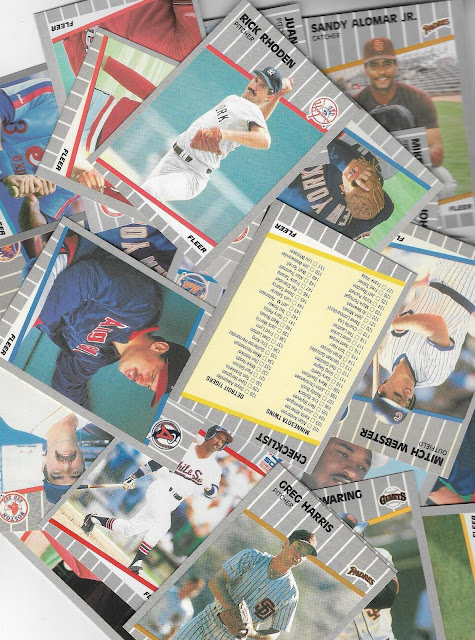 1989 Fleer doesn't deserve any organized presentation. I should've finished off this set when Johnny's Trading Spot sent me a full box to open. Hell, I should've finished it in 1989. But anyway, I'm very close to getting this done, too. Don't tell anybody that I still "need" cards from this set. 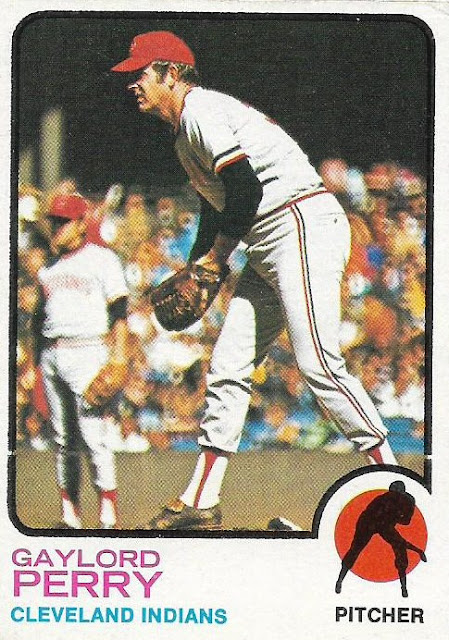 This is really the set that I want to complete most right now.

I'm down to under 10 cards to finish the set (but 13 total if you include the team checklists). Bo gave me the last double-zero card I need, Gaylord Perry (I think that's Graig Nettles in the background, which is one of those great examples of a player appearing with two different teams in the same flagship set as he's airbrushed as a Yankee on his own card). 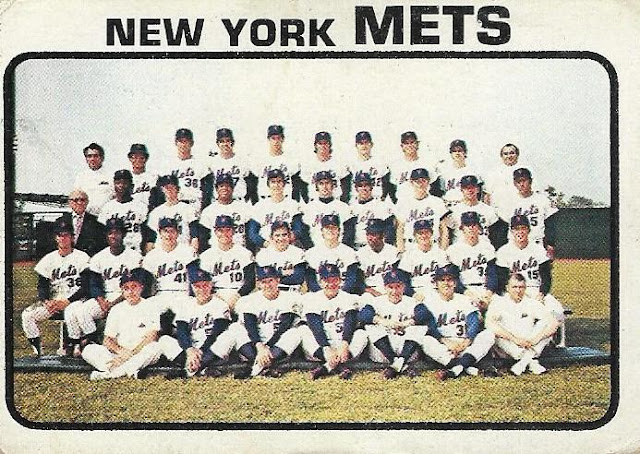 The Mets' team card in the year that they made it to the World Series. Good to get that one off the want list. I see you, Yogi! 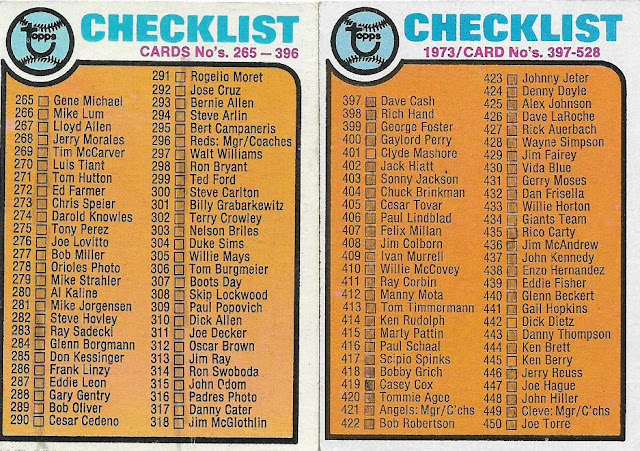 And a couple of checklists.

Normally I like my checklists unchecked for post-1960s sets but I probably will let these go since it's pencil-markings. If I want to upgrade later I can.

That is my kind of a trade package because it was 100 percent geared toward my set-completion goals.

Each year at the end of the year I review how well I've done with completing sets and the last couple of years I haven't been too happy with my performance.

This year has been better and I want it to be even better in the months to come.

There is that other thing that Mick was actually singing about.

Fuji said…
Completing sets is an awesome feeling. I should target a couple and knock them out just to make me feel more productive.
October 21, 2019 at 8:48 AM