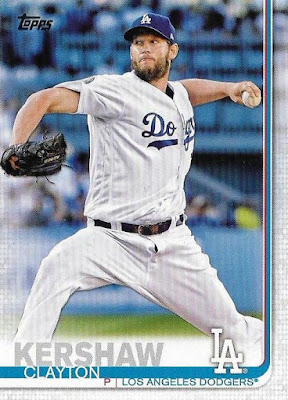 Before the 2019 cards came out, when we were feverish with anticipation, Ben of Cardboard Icons made a discovery when looking at a mock-up of Clayton Kershaw's Topps flagship card.

Glance pant-ward and you will see what appears to be a zipper down. At some point during the game, Clayton did not examine his zipper.

Nobody caught the snafu on the mockup. So this ended up appearing on Kershaw's actual card, which you see above. So there's Kershaw on his baseball card for 2019, caught with his zipper down.

I recently acquired this card from Max of Starting Nine in the most recent envelope he sent me. I was half hoping that it didn't look as glaring as it did on scans I've seen, but, yup, it sure looks like pants need zipping.

Now, it's really not that big of deal. What's the crime if your pants aren't zipped? People are wearing underclothes, I hope. This just seems like an excuse for third-graders to get nasty. But at the same time -- zounds, Topps -- this is the photo you chose?

Topps gets its pictures from Getty Images and I've gone on Getty Images and checked out the photo. It's from the Dodgers' first game of the season last year against the Giants at Dodger Stadium. There were several other photos of Kershaw pitching in that game with no visible sign of his zipper being unzipped. Yet Topps didn't pick one of those.

Here's a nice photo from another game last year, available for the same cost of the unzipped Kershaw photo: 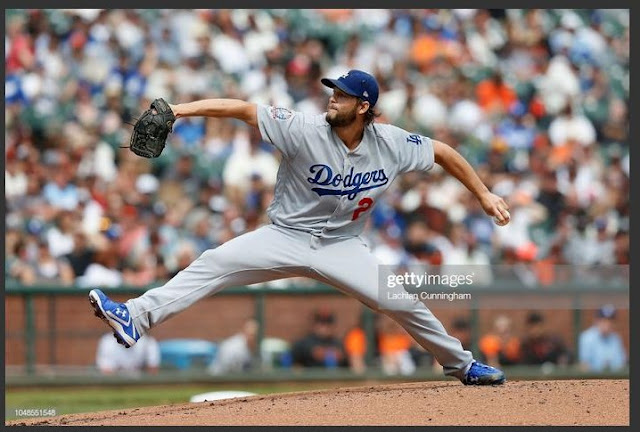 How come Topps didn't pick that one? This would be excellent.

I haven't been impressed with Kershaw's flagship cards in Topps since the 2015 card. (One of his league leader cards in 2018 flagship was pretty nice). It just seems Topps could have selected better every year and there certainly are plenty of images of Kershaw available.

But maybe Topps only gets to select certain photos from Getty. Or maybe they're saving the shot above or some other one for Stadium Club. Or maybe -- and this is annoying -- Topps is saving better photo stuff for short-prints and super-short-prints. Oh, boy!

It's just rather disappointing is all.

Here are some other cards from Max that I needed: 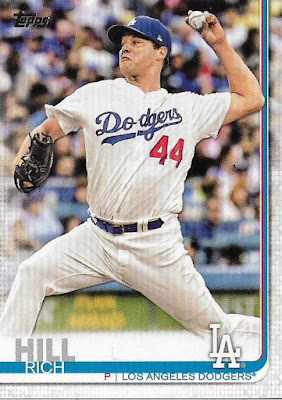 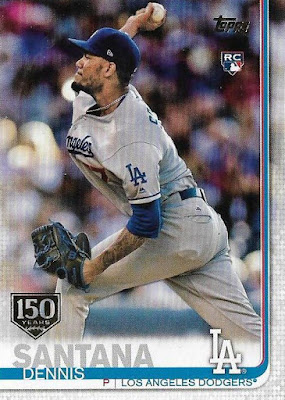 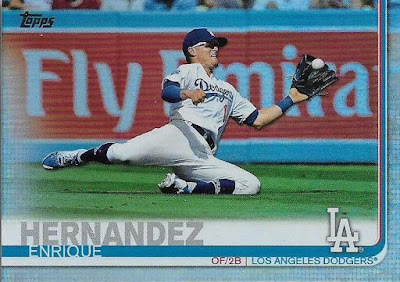 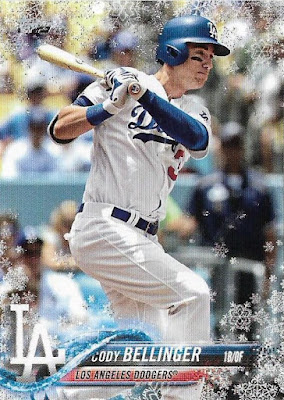 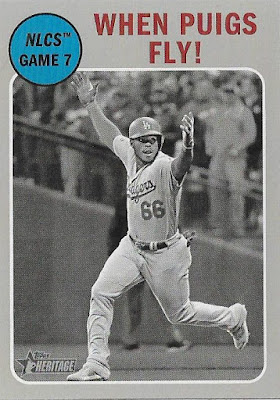 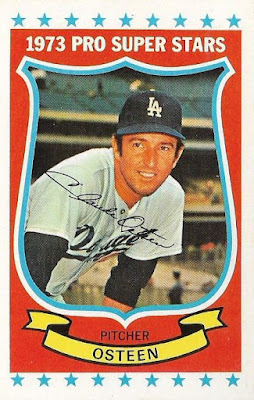 If you care (and the vast majority of you don't), that's my second "When Puigs Fly" card. I might have to accumulate as many of those as I can. It's also my second '73 Kellogg's Osteen card, but I will be completing ALL off those '70s Kellogg's sets some day.

Kersh deserves better than he gets sometimes. All the heckling about not being able to win the World Series. Focusing on his postseason ERA. Mocking one of the best pitchers of this generation, who does so much more for people of this world than win games for Dodger fan base. I can't help but think of that when I see his 2019 card.

All right, that's it for now. I'm going to zip it.

steelehere said…
I thought this was going to be a Claude Raymond 1966 and 1967 Topps zipper open post when I read the first few sentences.

Fuji said…
Topps totally should have used that other Kershaw image. That is one heck of an action shot.
March 21, 2019 at 12:44 AM

Defenders50 said…
I mean if this was an Upper Deck card with their hatred of the Dodgers and all, then this would make sense, but I don't think Topps has the same LAD baggage.
March 27, 2019 at 2:14 PM

Unknown said…
Hey I have the 1990 Topps box set cards dodgers had the most player cards in it also have a duke Snyder ,peewee Reese ,Sandy Koufax ,fernie valenzuela.do you know if there is any value to any of them
July 28, 2019 at 2:03 AM