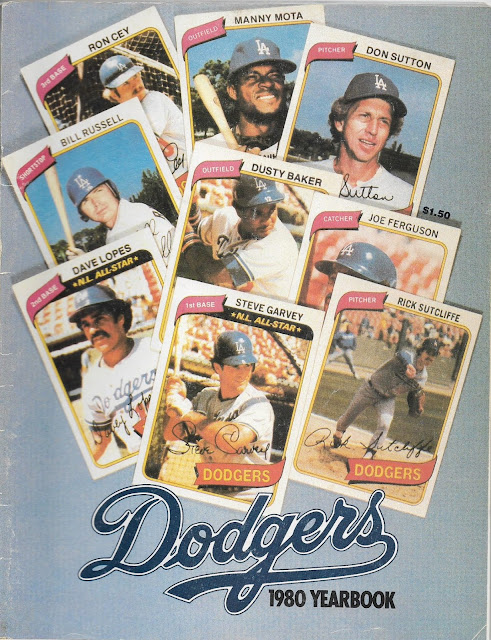 It's contest time. Brian from Collecting Cutch wants to know about a year my favorite team didn't win the World Series.

Needless to say, this is an overwhelming concept.

A year my team didn't win the World Series? Like, say, in the last 31 years? I know my team isn't the Padres or Mariners or even the Pirates. The Dodgers are a little more fortunate in some ways. But they also have been around much longer than most of the unfortunate, so they've had many, many years to compile ineptitude. The Dodgers were the perennial loser Brooklyn Bums for more than 20 years during the early part of the 20th century, and then during the '50s almost all they did was lose World Series. They have Mickey Owen and Ralph Branca and Tom Niedenfuer in their history. There's all those Series losses to the Yankees and all those playoff losses to the Cardinals and, uh, losses in the last two World Series.

So I had to do some thinking. And I settled on a team that played long before many bloggers knew what baseball was. But it is a year that is very alive in my mind still, as if it happened just last year. That was the year the Dodgers did something remarkable ... and didn't make the playoffs.

That really struck me in 1980. I started following baseball around 1975, 1976. The Dodgers finished far behind the Big Red Machine in the NL West each year. No real chance of contending. Then in 1977 and 1978 they reached the World Series before losing. In 1979, L.A. took a nosedive and finished under .500.

So up until that point, that's how I thought baseball worked: you either finished waaaaay out of it or you played in the World Series.

A new kind of agony waited for me.

The Dodgers of 1980 were much like the 1970s Dodgers that I knew as a child. You can see by the yearbook above that many of those guys appeared with L.A. on 1970s cards, too. I liked that I knew most of these guys for a fifth straight year.

The longest-running infield in MLB history was still intact with Garvey, Lopes, Russell and my favorite, Cey, manning the diamond. 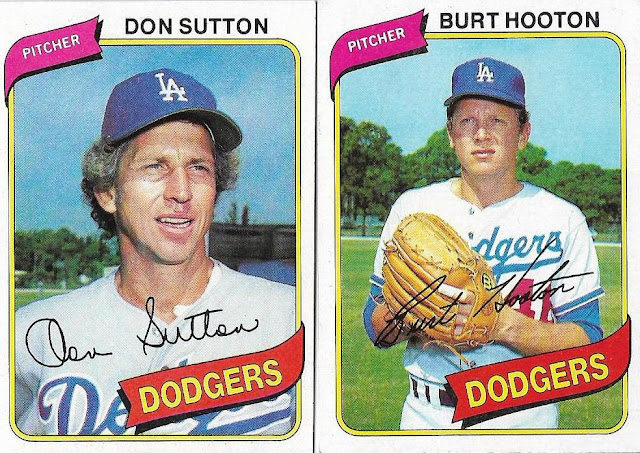 The starting pitching staff had evolved from the World Series days. I knew the starting rotation as Don Sutton, Tommy John, Burt Hooton, Doug Rau and Rick Rhoden. But John ditched the Dodgers for the Yankees. Rau endured arm problems. Rhoden was shipped to the Pirates. 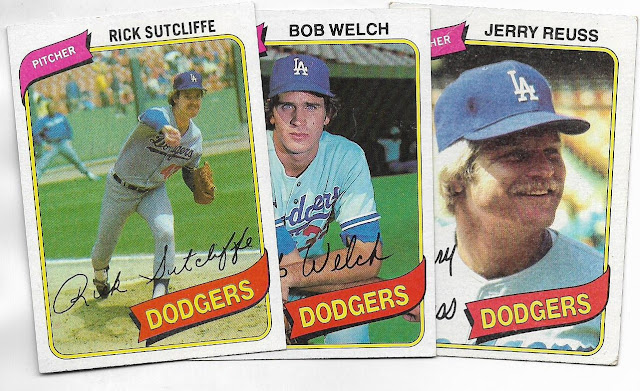 These were their replacements. Rick Sutcliffe did well in 1979, winning the Rookie of the Year. But in 1980 he was terrible and feuding with manager Tom Lasorda. Fortunately, Bob Welch and Jerry Reuss were terrific in '80. Reuss, who came over from the Pirates in the Rhoden deal, was particularly great. 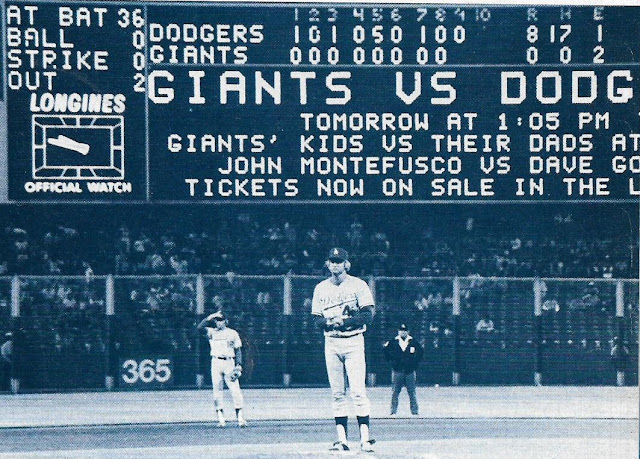 Even if Reuss never did anything else for the Dodgers -- and he did a lot -- he forever became a hero to me for his June 27, 1980 no-hitter against the Giants in Candlestick Park. It's the first no-hitter by a pitcher from my favorite team that I ever knew (it was the Dodgers' first no-hitter in 10 years).

The Dodgers, trying to erase the memory of 1979, had brought in several other new pieces for the 1980 season, diving into the free agent market for the first time during the '79-80 offseason.

They threw money at two notable pitchers, one a starter and one a reliever. 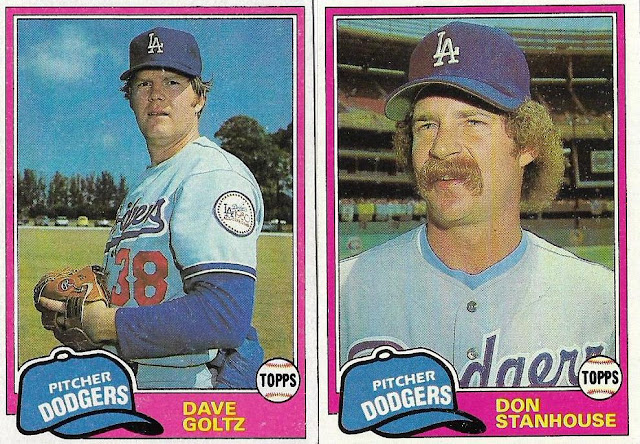 Dave Goltz was so atrocious that when I went looking for his 1981 card to scan, I realized I had never put it in my Dodgers binders and it had gone unnoticed for all this time.

Don Stanhouse? He was even worse. He was out of commission from April to July and when he came back it was not good. Five teams in the NL hit over .300 against him. 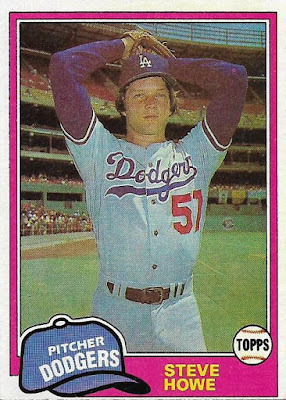 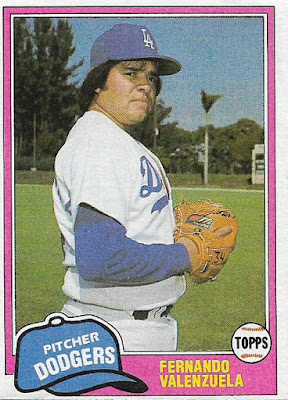 These were my guys as a 14-year-old fan. It was exciting watching them play and mixing in with the familiar veterans. 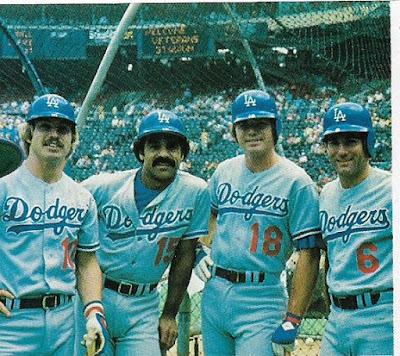 The Dodgers were in the news quite a bit in 1980 because they hosted the All-Star Game that year for the first (and, so far only) time. I watched that game with pride even though I lived 3,000 miles away and had never been in Dodger Stadium. I still remember watching that game at my grandmother's house in Buffalo. Four Dodgers (Garvey, Lopes, Russell and ... Reggie Smith) started that game. 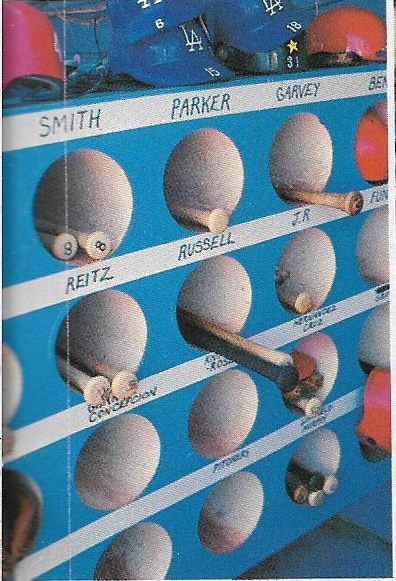 The Dodgers started the season off well, winning 10 games in a row at the end of April. But the Astros were just as good that season with players like Cesar Cedeno and Jose Cruz and an incredible pitching staff in Joe Niekro, Ken Forsch, Nolan Ryan and J.R. Richard (who would suffer a stroke in late July of 1980).

Around and around the two teams went until the end of September when the Dodgers found themselves three games behind the first-place Astros with three games left in the season. The Dodgers just happened to be scheduled to play the Astros for the final three games of the season at Dodger Stadium.

So, the mission: win all three games against the Astros and then win a one-game playoff with the Astros, which would also be at Dodger Stadium.

That's stupid. Nobody can do that, right?

Well, the Dodgers made a hell of a try. 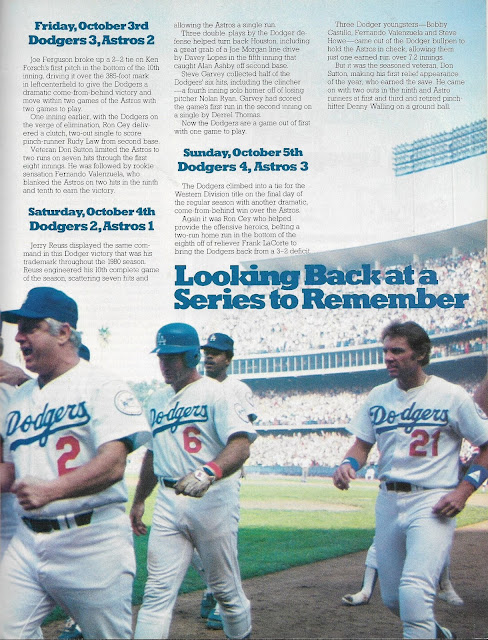 Every game decided by one run. Every game a Dodger victory.

The Dodgers won three straight one-run games to force a one-game playoff. Steve Garvey hit a home run off Nolan Ryan (the Astros' big free agent acquisition for that year). Joe Ferguson walked off the first game with a 10th-inning home run. Ron Cey sealed the deal with a two-run home run in the eighth inning of Game 3. Don Sutton came in for a relief appearance. And people just started to figure out who Fernando Valenzuela was as the young Mexican player was lights out in his relief appearances.

Living on the east coast, I received the information as if it came in a dream. The games were so late. I wouldn't get the news until the next afternoon sometimes. What? The Dodgers won the first game in the 10th inning? What? Jerry Reuss pitched a complete game and they're only one game behind?

By the time the Dodgers had tied the Astros for first place I had gotten caught up. I was aware enough of the discussion among fans and in the media: who would start the one-game playoff? The Dodgers said it would be Dave Goltz, who had won a pathetic seven games that year with an ERA over 4. Everyone else wanted it to be the kid, Valenzuela.

Goltz started. The Dodgers lost 7-1. I have that score burned in my brain, but I couldn't tell you a single thing that happened in that game because I didn't watch it and I didn't review it in the paper. I knew it was a lost cause as soon as Goltz was confirmed as a starter.

The Dodgers went home. But that 1980 season obviously meant something because a year later, L.A. would beat the Astros in something called a "division series," then beat the Expos, then beat the Yankees in the World Series. 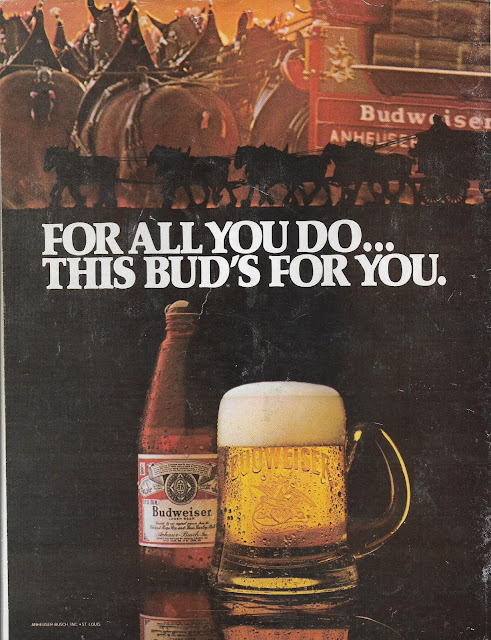 This Bud's for you.

(P.S.: Where the heck is Reggie Smith's card on the front of that yearbook?) 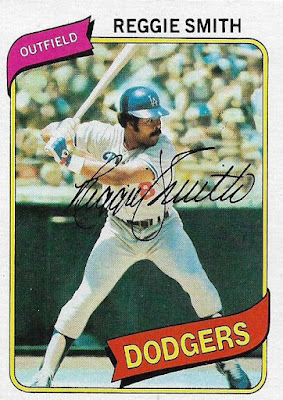 bbcardz said…
Yes, I remember the heartbreaking end of the 1980 season along with the heartbreaking World Series losses in 1974, 1977 and 1978. But I prefer to stay focused on the good memories, like actually seeing Jerry Reuss throw that no-hitter against the Giants on TV. That was the first no-hitter I'd ever seen on TV--good times!
April 1, 2019 at 7:00 AM

Commishbob said…
I remember that end of the season sequence very well. Houston, still mostly a football town at that point, went nuts. For that Monday game I went over to the Houston Post and watched with a couple of sports writers on monitors in the newsroom. Was lucky enough to get good tickets for the Phillies playoff series and it's one I'll never forget. Neither will my buddy who lost his wedding ring waving and jumping sometime during Game 3!!
April 1, 2019 at 9:44 AM

GCA said…
I remember dreading the end of any game (like you did with Goltz) when the Orioles would put in Stanhouse before they kicked him to the other coast to your Dodgers. If there were guys on base, they were coming in when ol' 'fro boy was pitching.
April 1, 2019 at 9:50 AM

Collecting Cutch said…
Losing 7-1 on the most important game of the year with a pitcher you dreaded being out there? Thats brutal. I felt a similar way when the Pirates sent Edinson Volquez to face off Madison Bumgarner in 2014's Wild Card Game.
April 1, 2019 at 12:14 PM