Playing for both teams 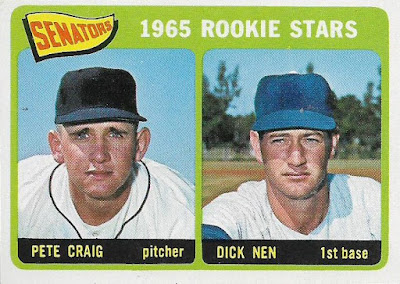 I am not inferring anything about these two gentlemen. This is merely a blog title to get to a point.

The February edition of Beckett Vintage magazine is now available everywhere and anyone who wants to read the article I wrote for it has probably done so or has pretended to do so. I've been charmed by the people I know who have absolutely zero interest in baseball cards who have read the entire piece and have supposedly enjoyed it. It's nice of them to say so.

I am just getting going on another story for Beckett Vintage. I know my story topic and I have the deadline date. So this may be a regular thing, guys, and that's pretty awesome and also pretty weird.

You see, in some ways I have been an adversary of Beckett and publications like it. I am the enemy of the very industry that I enjoy and adore so much, the magazine industry.

I enjoyed magazines so much growing up and wanted to write for them so much that when blogs came along, I was instantly attracted to them, but I didn't realize what they were. They were online magazines. And baseball card blogs were online versions of baseball cards magazines. It took me awhile to recognize that.

Even after I did realize that, it's not anything I thought about much. I just kept on writing.

But recently, blog reader Dave, who has sent me many, many awesome card packages over the years, sent a package with a note that made me think. It said:

"Seven years ago, I did not renew my subscription to Beckett as I found reading baseball card blogs -- such as yours -- more informative and enjoyable. Now you're writing for Beckett!"

I think that's what's known as "playing for both teams" -- the nonsexual definition of the phrase anyway.

That made me feel a little weird. I've probably contributed to Beckett losing subscribers and now I'm writing for one of their magazines. That is ... interesting.

If I want to keep going on doing what I'm doing -- writing regularly for this blog and contributing articles for Beckett -- then I'll leave it at that and not think about it anymore. I know a good thing when I see it, and writing about cards in whatever form is a great thing. So instead of thinking about all kinds of uncomfortable thoughts, let's see the cards that Dave sent! 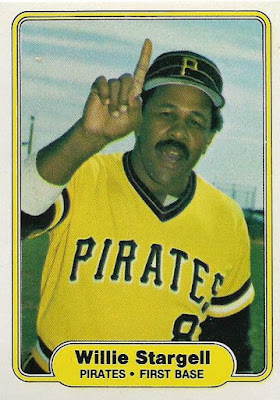 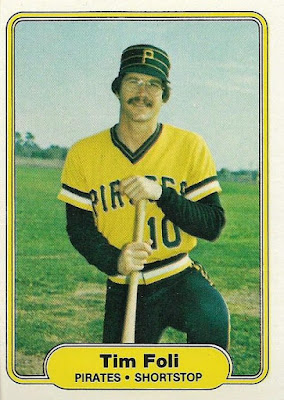 He had let me know that a package was coming a little bit ago because he said he had a couple of 1982 Fleer needs off my list. They are Pirates, of course, because Dave is a Pirates fan.

But he didn't stop there because that is totally unlike him. 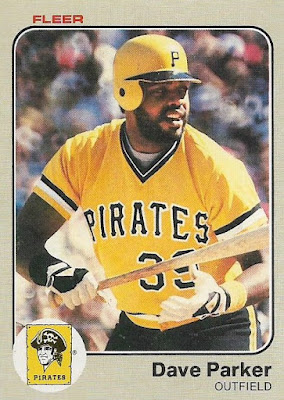 Here is a Fleer Pirate need from the very next year. 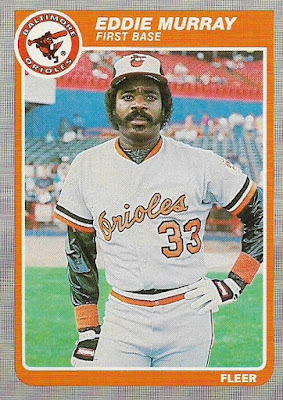 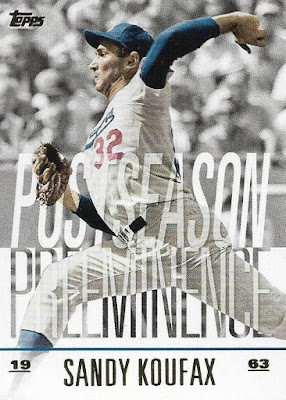 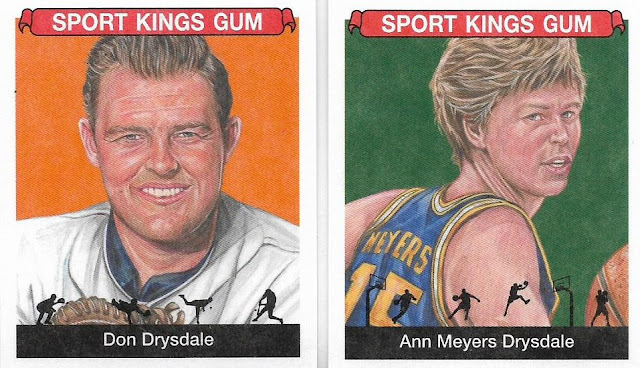 Here is a card of Koufax's former teammate, Don, and Don's wife, the great basketball Olympian, Ann Meyers, on a 2018 card set issued by Sage and based on the old Goudey Sport Kings cards. They're pretty nifty and mini-sized. 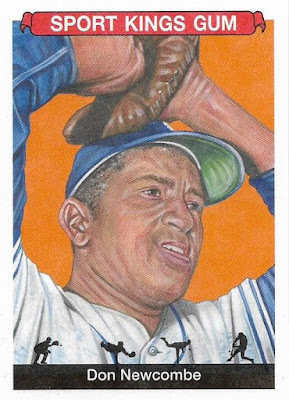 Here is a full-sized Sage Sport King of a predecessor of Drysdale. I didn't know Sage could do such quality work. 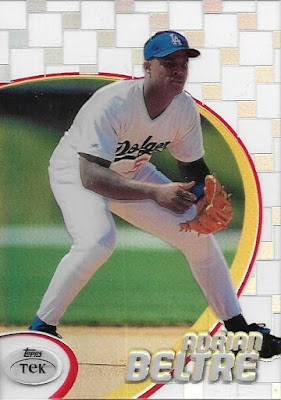 Here is yet another design from Adrian Beltre's 1998 Topps Tek card. I have a couple of other versions. I don't even want to know what all the other ones are because someone is going to say there are 4,796 other versions and I'll never say anything nice about '90s cards again. 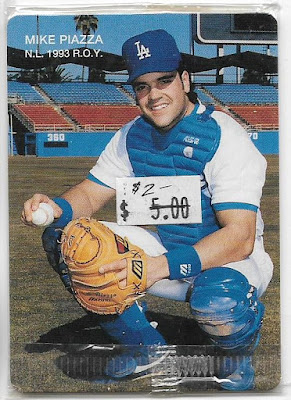 Here is a 1994 Mother's Cookies Mike Piazza set all nicely wrapped and marked down for me. 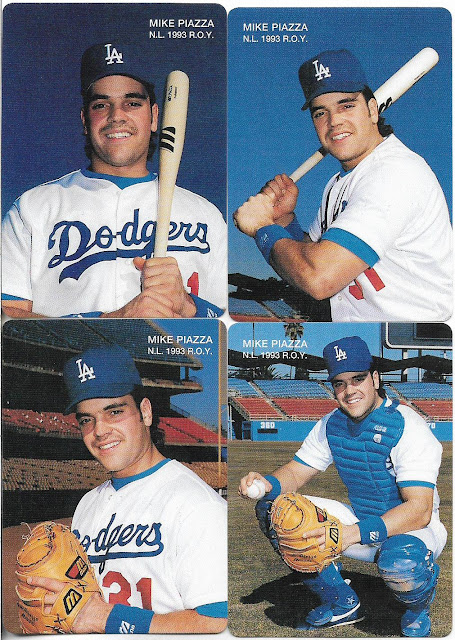 Here are the four cards in the set. I have owned the top two cards for quite awhile. But the bottom two are new and I am so happy the set is complete. 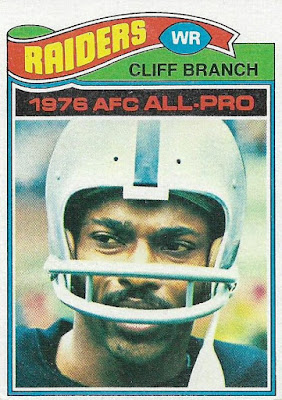 Here is one absolutely awesome 1977 Topps football need. You never hear about Cliff Branch anymore. Back when I was first watching football, you heard about Cliff Branch ALL THE TIME. If you had a card of Cliff Branch, you had something special and you knew it. Look at that thing. That's practically a perfect trading card. 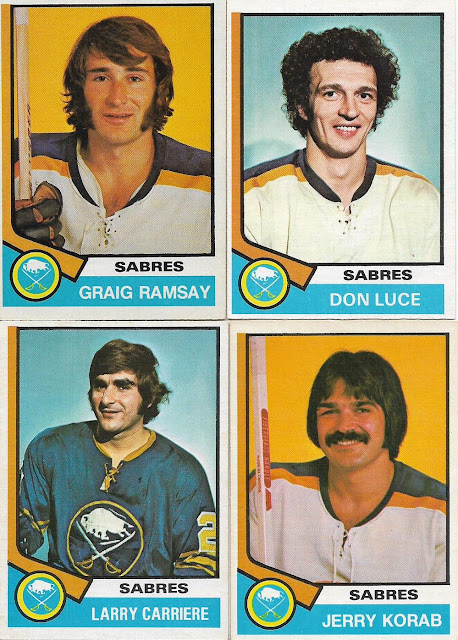 Here are four heroes of my sister-in-law's from when she was a teenager. She knew all these guys. Loved Jerry Korab. My sister began to follow these guys, too, although she was too young to really know anything more than her sister thought they were cute. 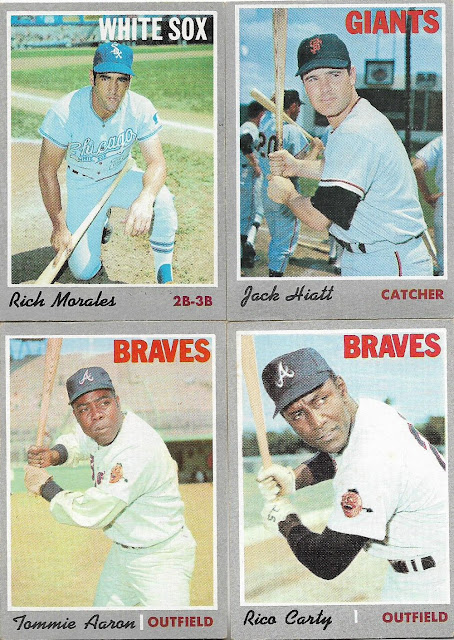 Here are four 1970 Topps needs that are in brilliant shape. Rico Carty was an absolute bat wizard at this exact point in time, hitting .342 the previous year. The stats on the back list his reason for playing in 1968 as "illness". I guess writing "TUBERCULOSIS -- DID NOT PLAY" might freak out the kids. 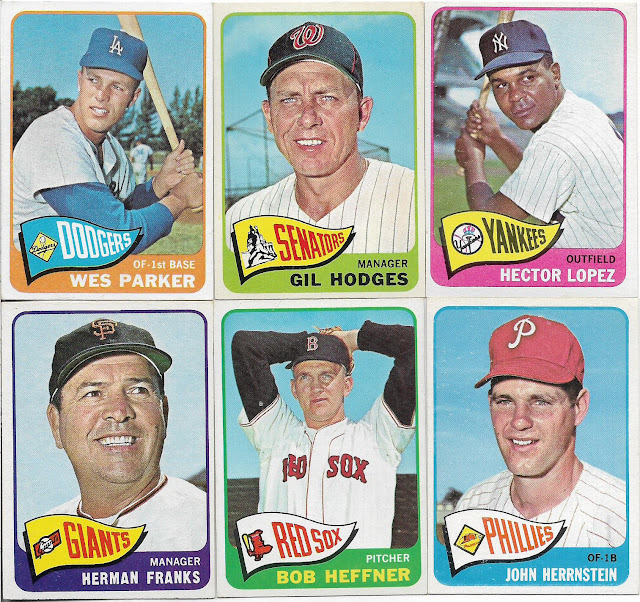 Here are six fantastic-looking 1965 Topps cards that were actually joined by a seventh -- that rookies stars card up top of secret lovers Pete and Dick (dammit, I said I wouldn't do that joke!). I have no plans to try to collect the 1965 set, but it's always nice to have 50-plus-year-old vintage in the house to impress guests. 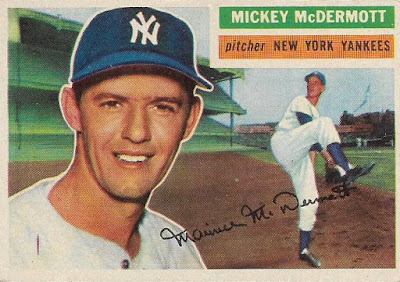 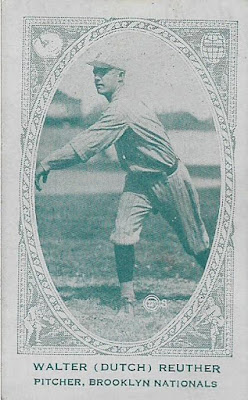 It LOOKS like a 1922 E120 American Caramel card of former Brooklyn player Dutch Reuther. But that can't be it, can it?

Half of me feels that this is a reprint. I recently received some other reprints from this set, but those cards feature a general light green tint, on the border and on the back and look like reprints of the set listed online.

This card, however, looks like the actual E120 American Caramel cards, front and back. 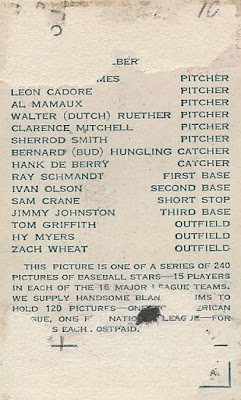 That's the back, which obviously had been glued to something at some point. The paper has torn away on the top and the bottom, and the bottom is unfortunate because that's where it often says "Reprint" if it is a reprint.

Instead, the back looks like a bloody actual 1922 E120 American Caramel card!

But I have no idea. I have never seen one with my own hands. I don't know what they're supposed to feel like. Are they flimsy (this one is)? Are they thick? Are the corners sharp or rounded? Who do I ask about this stuff?

I could wonder about this for the next 20 minutes, but I need something to take my mind off this now, too, so what else is in the package? 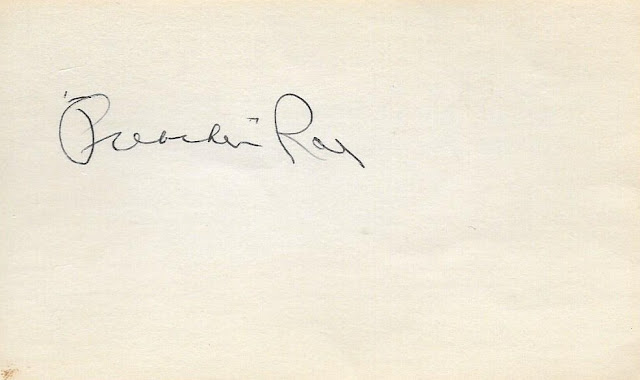 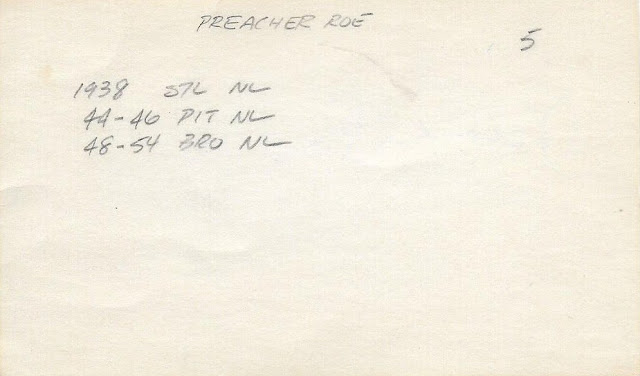 Confirmation on the back.

That is pretty cool. I have a baseball card signed by Roe, which will always be my preferred way to own a signature. But still, I can picture someone spotting Preacher Roe in the hallway and looking everywhere for something for him to sign and coming up with just this index card and -- wham!!!! -- a signature from a Boy of Summer.

So that was a package full of a lot of great stuff that raised a few questions with not a lot of answers.

I will enjoy this hobby. I will enjoy writing about this hobby whether here or in a printed magazine or both. And I won't spend too much time thinking about any of that.

Bo said…
Maybe Beckett realizes the way to keep subscribers is to hire writers like you.
February 10, 2019 at 9:31 PM

steelehere said…
Your post reminds me a lot of Grant Brisbee of McCovey Chronicles farewell he wrote the other day. I don’t like the Giants but his writing is incredible. He left to go to a pay site (the Athletic).

I don’t know if you’ve done so yet but I’d be interested in signing up for a subscription to Beckett Vintage if you can post a promo code or a referral code in order to show that my signing up was a result of reading your blog.
February 10, 2019 at 11:50 PM

Fuji said…
You and Mario (Wax Heaven) got me to read (and start my very own) blogs. Now that you're writing for Beckett... maybe I'll restart my subscription. Nah. That's not gonna happen. But I will go out and buy the issue that features your next article.
February 12, 2019 at 12:11 AM