Heritage just gets meaner and meaner 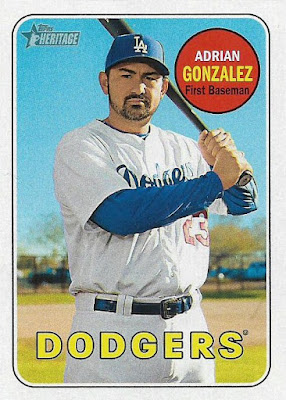 So, team collectors, how ya doing with completing that Heritage team set from last year?

Yeah, yeah, I know, you bought the entire team set last March. Probably a smart system when it comes to Heritage.

The checklist for 2019 Heritage was released the other day and before I do anything else, I head right for the short-prints portion of the list. I want to know what kind of aggravation I am facing right up front.

It turns out I'm facing significant unpleasantness. The Dodgers feature a whopping six short-prints in this year's Heritage set. That is one year after the Heritage broke the old record for the most Dodger SPs with five (the Adrian Gonzalez card up top included). So, Heritage has set yet another record, and Heritage is just getting meaner and meaner and more and more difficult to collect.

Consider the various short-print related "innovations" in Heritage when it comes to collecting the Dodgers.

In 2013, Heritage twisted the knife on every team collector by back-loading the stars into the short-print portion of the checklist, which at the time was the final 75 cards in the set. Because that's certainly sticking to the format of 1960s Topps sets, right? What '60s set didn't throw Willie Mays, Roberto Clemente, Don Drysdale, Bob Gibson, Orlando Cepeda, Tony Oliva, Tom Seaver, Mickey Mantle, Willie McCovey and Sandy Koufax into the last series released?

But Heritage hasn't let go of that format, leading to a very unbalanced set for set collectors. Want to see all of the stars? Please turn to page 32 in the binder.

And in fact, Heritage has made collecting it even more difficult. Two years ago, it upped the number of short-prints to 100. Instead of SPs occurring between cards 426-500, they now appear between cards 401-500. More collectors must now chase more short-prints.

To add to the punishment for Dodger fans, the last two years -- when the SPs have been at their peak -- have delivered the most Dodger short-prints, five last year and six this year.

Let's look at the number of Dodger SPs in Heritage since they started putting them at the end of the set in 2008 (coincidentally the first time I started buying Heritage packs):

Have I mentioned that two short-prints from my Dodgers team set from last year's Heritage set -- 426, Rich Hill and 433, Hyun-Jin Ryu -- are still missing from my collection? Now you know why I'm caring less and less about having all the Dodgers.

I refuse to run all over God's green earth for Heritage SPs. Maybe I should order the team set at the start of the year, but even that seems like a hassle. I have so many more desirable card needs right now.

And I can't help but think one of the reasons I feel that way is because of what Heritage has been doing to the collector the last few years, ratcheting up the difficult year by year.

There are those who have argued that the SPs do in fact resemble the challenge that collectors faced back in the '60s. Those SPs represent the dreaded "final series," issued late in the baseball season, when collectors had turned their attention away from baseball and when stores purchased fewer cards from distributors because they knew they couldn't sell them. To this day, those "final series" cards are some of the most difficult-to-find and expensive cards in Topps sets from the 1960s and early 1970s.

And if that's what Heritage is doing with the SPs -- paying tribute to those "final series" -- then, fine, cavalcade of stars aside.

But if that's the case, I'm giving Heritage until 2023 to knock off this nonsense. Because in 1974, Topps decided to issue its entire 660-card set in one shot. Every card was as available as another card and they were available the entire collecting series.

So, when Heritage is released and you hear about how it's better than ever, just know:

Heritage is actually meaner than ever.

BaseSetCalling said…
I am buying just the usual sample pack or two, to see the cards. I want to do the set next year ... but I am already not looking forward to it.

I realized the other day that the 400 base + 100 SP format won't be going away, as Topps prints on 100 card sheets now, I am pretty sure. How they fill out the 100 SP checklist though, is the mean part.

John Bateman said…
This sucks, 2018 Heritage (1969) is the only set where there were no stars short printed (Gonzo, Ryan Braun, Jansen were the only big names. Every other year recently is sp the top players.
February 21, 2019 at 9:29 PM

Jim from Downingtown said…
Night Owl, you need to add a 4th label to this post:

GCA said…
Preach, brother!
Maybe the inserts will make it more enticing...oh wait, they've been exactly the same for twenty years...
February 22, 2019 at 8:46 AM

Matt said…
I never got into Heritage much specifically because of the short prints. I'm genuinely surprised the Red Sox only have 4SP this year.
February 22, 2019 at 9:34 AM

Henry Blanchette said…
I always enjoy Heritage, but it's become much harder to collect the set over the last few years. It seems like, this year, they've gone for more of a mix between stars and lesser players for the SPs. I'll be interested to see if that balance works out.
February 22, 2019 at 9:47 PM

carlsonjok said…
Heritage should be right in my wheelhouse, but I hated chasing short prints with a passion. It was what pushed me to be a vintage only collector. Reading this post, I can say I have no regrets.
February 23, 2019 at 6:22 PM