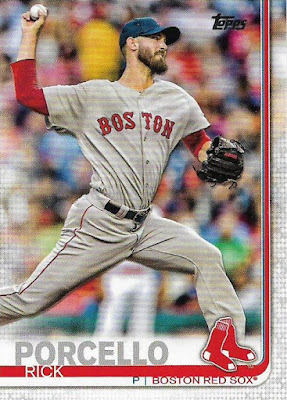 This is my first 2019 card. It's tradition around here to show the first card of the year and that is about all I have time to do today.

I bought a hanger box, a fat pack and one single pack of 2019 Topps earlier today, braving the very sketchy snow-covered roads and other weather-related issues. But the full picture must wait until tomorrow because, as I've recently mentioned, Topps has to dump its release date in the middle of an overflowing plate.

What I will mention is that old familiar pack frustration has returned for another year.

Those who don't buy retail packs warn me against this stuff and, really they don't have to warn me. I know what I'm getting into, I've been doing this for 40-plus years. The thrill of opening the first packs of the year is one of the greatest highs in this hobby. I refuse to cut myself off from that.

But the most frustrating part for me is I pulled 88 cards before I pulled my first Dodger card -- my only Dodger card.

I know nothing is guaranteed and nobody can do anything about this, but there is no better way to demoralize me than, with the very first packs of a brand new baseball card season, make the Dodgers THE VERY LAST TEAM THAT I PULL.

I don't even feeling like going back to buy more cards. And that never happens on the first day of the card season.

Here, I totaled up all the teams in the packs I opened:

There you go. Dodgers tied for the least with the Orioles. Dodgers -- the two-time defending NL champions -- one card pulled. And it was a checklist card, too.

I pulled seven Yankees before pulling a Dodger. Five Red Sox. Six Diamondbacks. Four Padres, my goodness! Do the Padres even have four players worth putting on a card?

Somebody is sending me a message with this, on the first purchase of the 2019 card season. It is this:

Have a good time opening your first packs. But don't expect anything.

See you tomorrow with a more positive spin on the 2019 Topps flagship set. 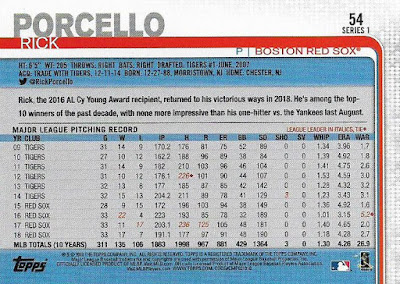 These card backs are killer.

Nachos Grande said…
At least you could find packs... My local Wal-Mart still doesn't have any. Our baseball card aisle is now about 1/5 sports cards (at least half of which are football) and the other 4/5 things like Yu-gi-oh and Magic. It's very sad for a collector in the middle of nowhere.
February 1, 2019 at 10:40 PM

bbcardz said…
Sorry your pack breaks weren't better, Greg. Mine (Target) weren't much better. I did get three Dodger cards out of the 101 cards I got. I expect the numbers will greatly improve when I break my jumbo box.
February 2, 2019 at 2:23 AM

Metallattorney said…
My first pack post is coming soon. Needless to say, I also pulled a ton of Yankees.
February 2, 2019 at 11:07 AM

JediJeff said…
"Four Padres, my goodness! Do the Padres even have four players worth putting on a card?"

Jafronius said…
I bought a hanger box yesterday. I'm kinda dreading buying my next packs, fearing getting all doubles.
February 2, 2019 at 12:57 PM

Henry Blanchette said…
Topps' collation has been terrible for years now. It makes their decision to increase the number of cards per pack in 2019 even more confusing.

Community Gum said…
Sometimes I convince myself that Topps sends local team cards to other parts of the country to force sales and trades and interactions. But then things like this happen where Dodgers are not your local team, and then it makes me temporarily rethink the conspiracy theory.
February 3, 2019 at 11:25 AM