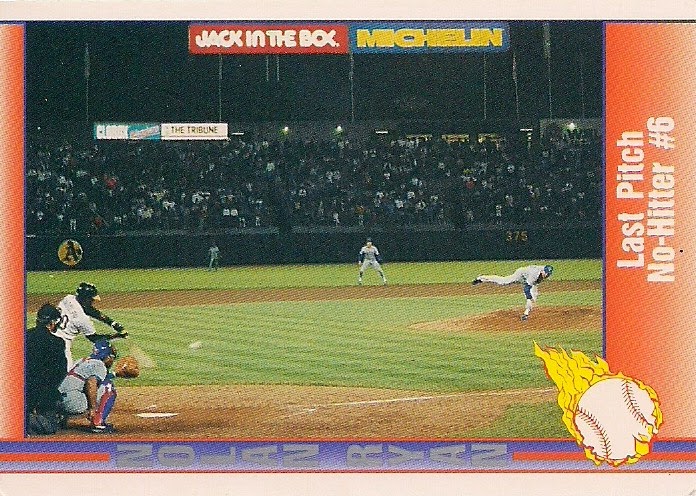 This is one of my favorite Nolan Ryan cards.

If we are to believe the sideways writing on the card, this is the final pitch of Ryan's sixth career no-hitter. And that is Willie Randolph directing a fly ball foul to right field, which will settle into Ruben Sierra's glove to end the game and set off Rangers pandemonium.

A few other IDs: The catcher is John Russell. The umpire is Don Denkinger. The shortstop is Jeff Huson. The left fielder is Pete Incaviglia.

Of course, the stadium is Oakland-Alameda County Stadium, before the Raiders returned to town, and before a number of other renovations. I am so glad the Jack In The Box and Michelin signs were not cropped out of the photo. They make the card. (I can identify the smaller Oakland Tribune sign to the lower left, but I have no idea what the other signs are).

What makes the card complete is the back: 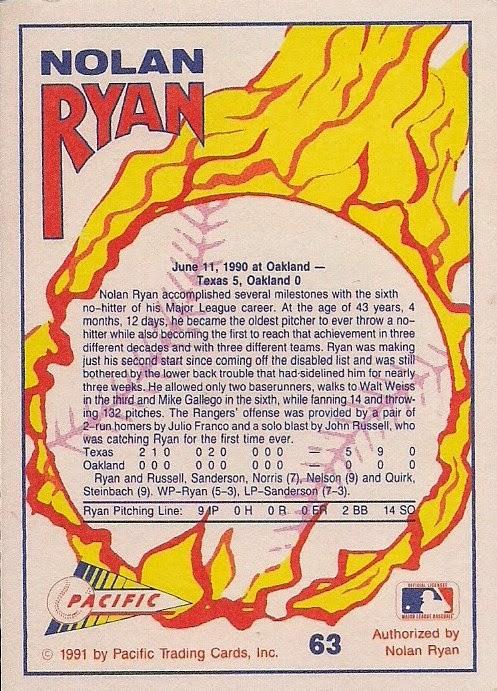 Featured there is a write-up on the game (the last sentence mentions that Russell was catching Ryan for the first time). And -- wonderful -- the linescore.

Sure, the full boxscore would have been better, and the type less microscopic, and the design -- good god, the design -- much less awful. But it will not stop me from calling it one of my favorite Nolan Ryan cards.

I know it's not among the Top 10 Nolan Ryan cards (that list is disturbingly lacking in Ryan cards from my childhood).

It's probably on the outer fringes of my Top 10 favorites, too. I'm very partial to his '81 Topps card, his '80 Topps card and his '75 Topps highlight card. But for a specialty set for what was a fringe company at the time, and considering the lousy design, I think this card is doing a lot. It's a classic card overachiever.

Commishbob said…
I watched the last couple of innings on TV. I'm glad Nolan is back here working for the Astros.
June 8, 2014 at 8:07 PM