The dangers of stacking, overstuffing and double-bagging 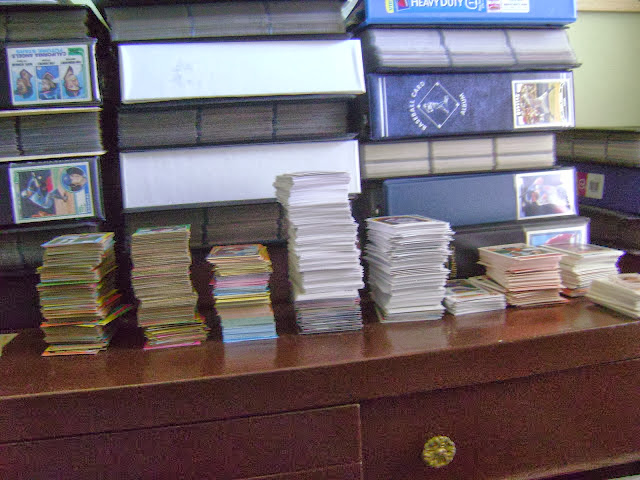 A few posts ago, I showed some pictures of "the card room" in my home. It's your typical assortment of card stacks, boxes and binders, binders everywhere.

I mentioned in that post that I stack binders on top of each other because I read somewhere that storing binders vertically can warp pages and then warp your cards.

But stacking comes with a cost, especially if you're trying to cut corners.

I have a lot of card interests and consequently a lot of cards. But I don't have the money or the space for all those binders. So I do two things that I know will cause several collectors to shake their heads.

First, I double-bag my pages -- 18 cards per page. I have done this since I first knew there were binders and pages to store cards. I've done this for so long that leaving nine cards to a page to this day seems extravagant. Almost wasteful. The only set that I have not done this for is the 1956 Topps set, because the card backs are so fantastic.

If I were to convert all of my double-bagged pages to 9 cards per page, I would need twice the binders that I have now and I already have about 60 binders. There is no room in the house for 120 binders. I'd have to do a major collection downsize or buy boxes upon boxes. Many tears would be shed.

Secondly, I've been known to overstuff a binder or two. I know this is bad. I know, I know, I know. But conserving cash causes a collector to do some desperate things.

It's disaster waiting to happen. 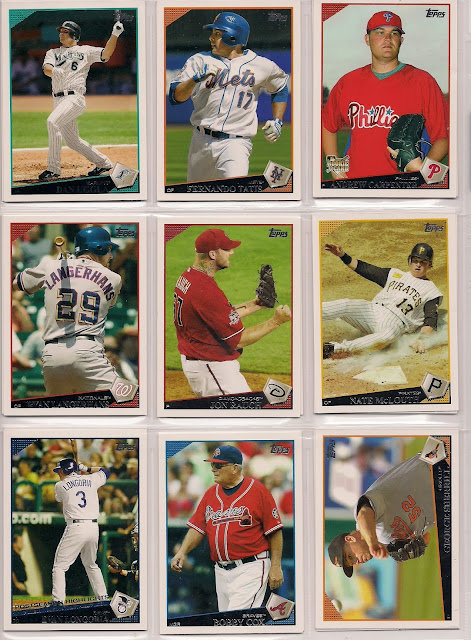 This is the first page of the 2009 Topps binder. The reverse, "double-bagged" side. The damaged card is the Nate McLouth card in the middle on the right. 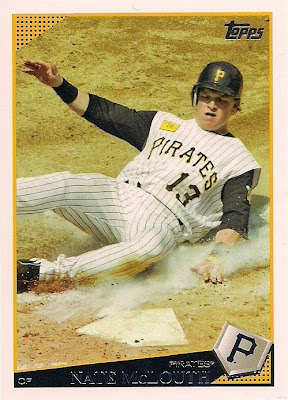 It's too difficult to see on the scan but there is an indentation from the center binder ring that runs from the outer middle right edge of the card, all the way through McLouth's arm and almost to the No. 13 on his jersey. It's really pretty ugly.

No other card in this binder has that damage, but there are other overstuffed binders in which a card in the exact same position as the McLouth card has suffered the same damage. 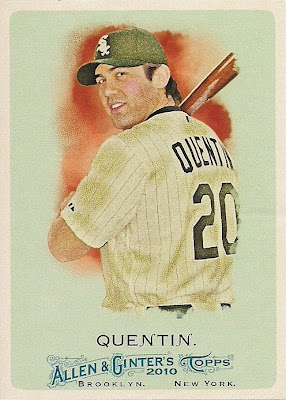 This is card #15 (also McLouth's card number) of the 2010 Allen and Ginter set. You can probably see the indentation leading from the right edge of the card into the zero in Carlos Quentin's uniform number. 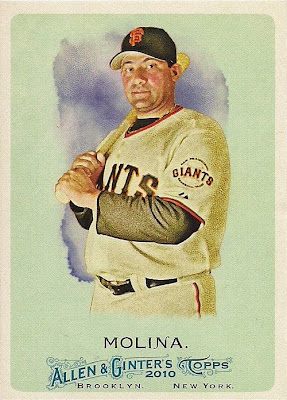 This Benji Molina card, which is card #33, also has a binder mark, although not as severe as the Quentin indentation. Molina is on the next page over from McLouth, but also in the same position on a page, right side of the middle row on the reverse side of the page. 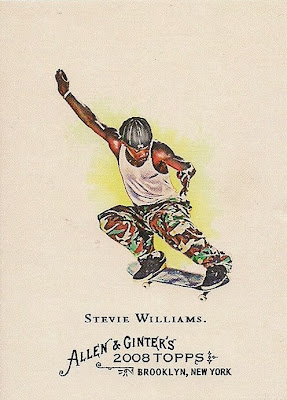 Probably the one that bothers me the most is from the 2008 A&G set. This is the only card in that set affected and it's not even on the first page or two of the binder. It's on the reverse side of the fifth page, but the indentation is in the same spot.

This card bothers me the most because '08 A&G is my favorite A&G set. It's such a pristine set on terrific cardboard stock and to see a mark on it is disappointing.

Those are the only cards that I've found that were damaged. But I am planning to find three more binders so I can split up these overstuffed sets. For now, those binders are standing upright, instead of being squashed by a stack, until I can find some cash for binders.

As for all my other sets in binders, they are fine. The rest are all double-bagged, but have just one set to a binder and that seems to eliminate any damage, even stacked on top of each other.

I don't claim to have the best way to store cards. I have limited means and limited space but a big cardboard appetite. So I cut corners and this is what happens sometimes.

I don't plan to change much of how I store my collection. I guess this is just a warning for those who want to stack, overstuff or double-bag. It's probably not a good idea to do all of them at the same time.

Play at the Plate said…
I'm just now in the process of getting some binders/pages for my Rangers collection. I didn't know about storing the binders upright. Thanks for the info.
October 6, 2013 at 7:56 PM

The Prowling Cat said…
If you have a Goodwill somewhere nearby go there for binders. I don't know how it is in your area but around here it saves me a ton of money. A good D-ring binder at the evil empire runs around five dollars minimum. I can go to the Goodwill's, and find them for anywhere from 99 cents to $1.99 all the time. I'm picky on the ones I use, but when I find a good one I usually buy it. Getting so bad about it that I have four binders waiting to be used. Just started organizing my collection better today so they will be getting use soon.
October 6, 2013 at 8:25 PM

BaseSetCalling said…
oh, Carlos Quentin, an ex-Brave and some Giant were the cards just randomly damaged by your binders. uhh-huhhh, sure. No Karma at work there, nope. The question is, what do you have against skateboards?


binders come from yard sales. sometimes, they even have baseball cards in them already I hear, though I haven't ever had that happen.
October 6, 2013 at 8:50 PM

CaptKirk42 said…
One thing that will cut down on the damage from the binder rings is to get the binder inserts that are called "sheet lifters". They are plastic shields that are placed at the front and back of the binder to put your sheets between. The flat ones or the curved ones that cover the entire ring area are the types to get. There is a "boomerang" style which is great for being what they are intended for "lifting the sheets" but that style doesn't protect from ring smushing. Not filling the binder past the intended capacity also helps to avoid that damage. I know it means more and more binders but it helps reduce the overpopulation problems and damage.
October 7, 2013 at 11:17 AM

Anonymous said…
I've stacked binders vertically for most of the past 30 years. The only time I see curving on the cards is when the binder is near empty and flimsy enough that it bends on its own.

I also tend to go for d-rings with the plastic flap that protects the front sheet because I have crushed cards on the rings.
October 7, 2013 at 11:48 AM