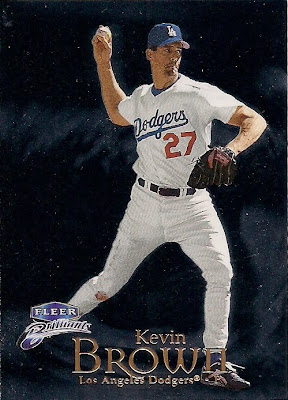 I saved these cards for just this purpose. You see, I'm a fan. A fan never believes his team is going to ultimately succeed. It happens so seldom and for so few. But when your team is eventually eliminated, that knowledge never eases the pain. You go to a dark place. Deflated. Empty. Disgusted with the remnants.

The Dodgers' 2013 season is dead. And I am dead inside today.

The World Series is dead to me, too. You think I want to watch the remaining teams who have an embarrassment of postseason success? No I do not (OK, if the Tigers win, that will be a little fun). The World Series is now a slap-on-the-back-fest for the organizations left. There will be no groundswell of support from the masses for this Series. This Series has no soul. It's dead inside.

So, I selected some cards that I received from Play At The Plate to appropriately display my feelings. I appreciate these cards because they were on my want list. But they are from a period when cards were full of flash and shine, but basically dead inside, too. Collectors weren't collecting at the turn of the century. And there were so many sets and so much desperation from card companies at the time that it reminds me of a drive down the Vegas strip. Lots of lights, lots of glitzy invitations. But no soul. Dead inside.

The scanner, spotting the emptiness of these cards, chooses not to show their shininess, but instead presents them as their true selves -- black, dingy, vacant. In person, this Kevin Brown card glows under the light and Brown himself rides the shining wave under his feet.

But on the scanner, the wave is almost nonexistent, and the most apparent part of the card is Brown's bloody, dirt-stained knee. That's how Brown left the Dodgers -- bloodied and dirty. 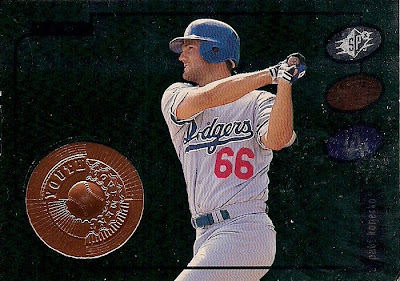 Paul Konerko's surroundings glow green when this card is tilted under the light, but the scanner knows that's just a gimmick. So it shows the card's inner ugly. Konerko is still apparent -- because he is The Man. But the shiny silver and gold on the right part of the card is barely visible. Konerko and his youth movement coin are floating around in a big black universe of emptiness. 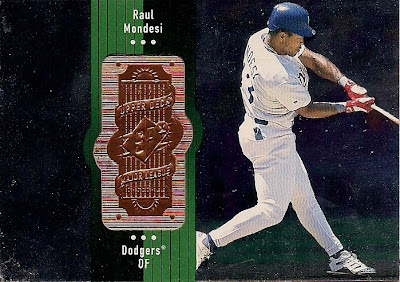 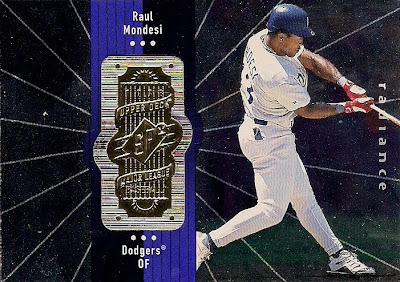 More blackness. These 1998 SPx cards of Raul Mondesi are numbered exclusively to 9,000 and 4,500, respectively. When you read the serial number, you can almost hear the car salesman's empty promise of "you'll be the only one on the road with this card."

The scanner refuses to show the black-and-white Mondesi figure on the left, as if he's not necessary, an extra bit of emptiness added to the card. The second card -- the more "exclusive" radiance version -- does feature the rays that you can only see when shining the card under the light. But both cards are pitch black when scanned. And the top card even shows some muck on the bottom left corner that you can't even see when holding the card. The scanner knows. 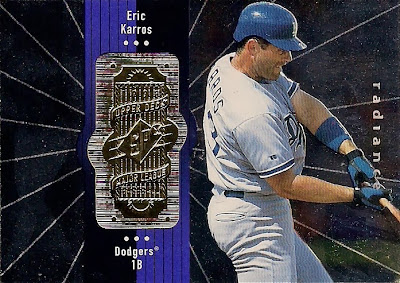 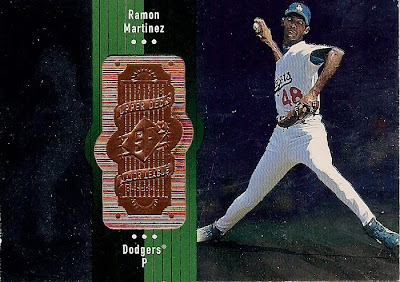 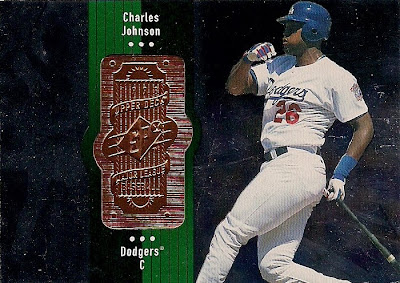 Even more blackness from '98 SPx. 1998 also was a dark, empty time for the Dodgers, a period when the O'Malleys gave up the organization and sold it to Fox, a corporation that treated the Dodgers as corporations treat teams. We all know how little soul corporations have. 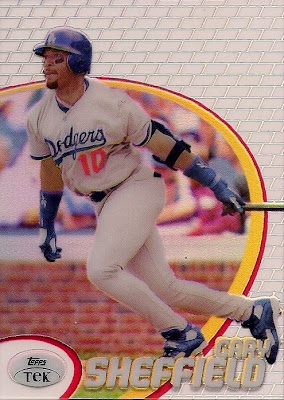 OK, this card is much brighter than the others. But Topps Tek might be the most cynical set ever made. I'm sure you could practically hear Topps laughing derisively as they announced the concept for the set. I'm  also sure the idea of collecting died a little that day. 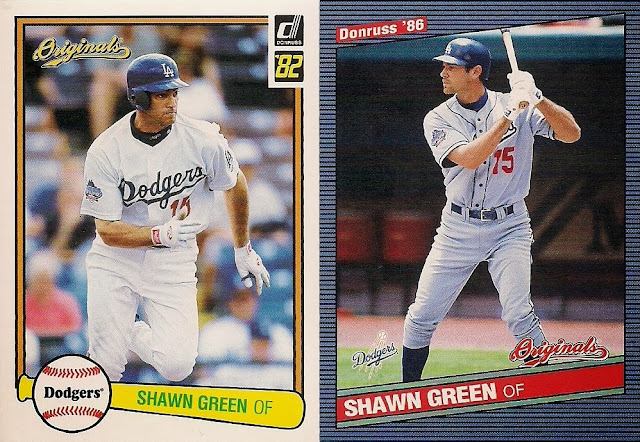 If you ask me, retro is what pulled collecting out of the late '90s doldrums and made it exciting again. It's certainly what helped bring me back from my collecting hiatus with the advent of Topps' All-Time Fan Favorites sets.

The scanner likes these sets. Although retro is now done to death and has lost its soul in things like super-short prints and pointless mini parallels, at one time it was new, exciting and inventive. 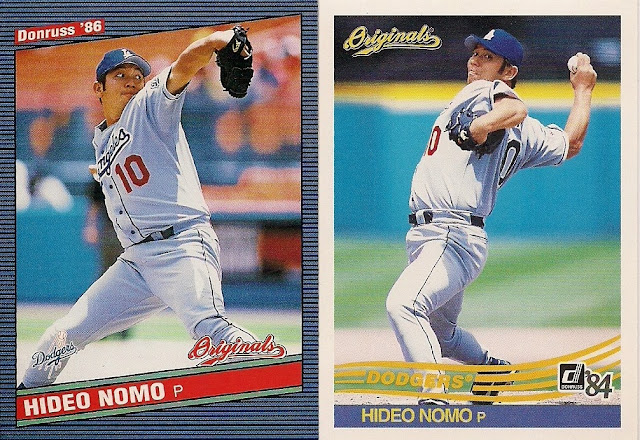 Even though the Dodgers were eliminated yesterday -- by a team I like less and less every year -- I want to end with some hope.

Sure the blog is dark today, but it will be back to its normal self tomorrow.

And I WILL enjoy these cards as I'm checking them off my want lists and adding them to my binders. They may not be my most favorite cards, but every team collector needs turn-of-the-century cards, no matter how soul-less the sets (we are still collecting 2013 cards after all, aren't we?).

I'll be back to rooting for my team next year as I enter a 26th year without seeing them in the World Series.

Meanwhile, there is a Series to ignore. Again.

BASEBALL DAD said…
Wow ! I feel for you brother. No matter what baseball does, it seems the same few teams always prevail. At least the Yankees were out of it. Pittsburgh did make a nice run, and even my Tribe got close.
But deep inside I'm a diehard baseball fan. I will watch the WS, although at this point I don't care who wins.
October 20, 2013 at 9:39 AM

Play at the Plate said…
Sorry about your Dodgers. Seriously. Now that they are out I am forced to hope the WS gets canceled. Glad the cards knocked off a few needs.
October 20, 2013 at 9:54 PM

The Junior Junkie said…
There is no dark side of the moon, really. As a matter of fact it's all dark.