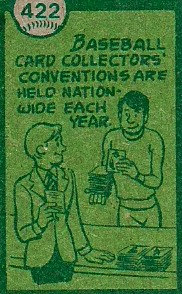 This may or may not become a regular feature. It seems more suited to Twitter, which is where I first featured these cartoons, but you never know when you need something quick to throw on the blog.

This cartoon that I found yesterday made me laugh instantly. It's off of the back of Freddie Patek's 1977 Topps card, and I was first attracted to it because the first few words were "baseball card collectors."

Then I panned down to the actual drawing, which is where the comedy gold lies.

First, we have the two gentlemen handling cards in the most cavalier fashion possible. With the exception of discount boxes, I don't think I've ever seen cards in stacks that weren't in top loaders and under glass at a card convention. And that one guy balancing a large stack of cards on his forearm is just asking for pain.

But the part that made me laugh is the guy at left. I think he's the dealer in this cartoon. I've seen lots of card dealers in my day and if they're wearing a shirt with a collar they are considered a sharp-dressed man. I am often a little concerned for some of the dealers based on the way they dress. It looks like they just woke up out of their cardboard box on the street.

I have never seen a dealer in a suit and a tie. And if I did, I think I'd avoid the table because I'd get ripped off for sure.

Let's see a few other cartoons: 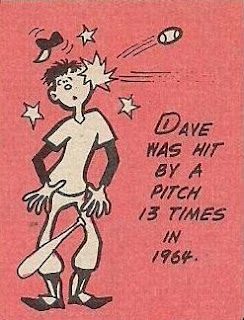 Following the tradition of Wile E. Coyote, Tom & Jerry and just about every TV cartoon from the 20th century, getting pelted in the side of the head with a 90-mile an hour fastball was just good, clean fun. Well worth the laughs. That crazy, Dave. Getting nailed in the temple again. Just dust yourself off and try again. 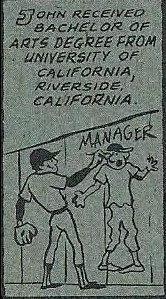 John might need to actually use that degree to earn a living if the manager sees that graffiti on the outfield wall.

I can imagine Steve in the dugout. Lecturing about the dangers of chewing tobacco. Whittling broken bats into toothpicks. I'd be sitting on the opposite end. 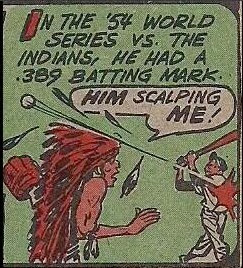 (*Ponders the firestorm unleashed if this were to appear on the back of a card today.*)

In the '60s, saying, "I'm going to play shirtless paddle ball" meant exactly this. I'm sure it means something entirely different now. 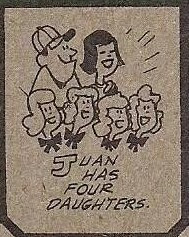 Juan Marichal, "the Dominican Dandy," was so amazing that he fathered four blond-haired girls.

And, finally, if this is the way people actually played night games in the 19th century -- well, the dead-ball era would be a lot more entertaining. Singed mustaches everywhere. And a few stadiums burned to the ground.

I could go for one of those alternate worlds right now.

hiflew said…
I love this post, it legitimately made me LOL. I do have to ask the one question that is puzzling me at the moment. Who goes to a VOLUNTEER dentist?
October 26, 2013 at 7:29 PM

Jamie Meyers said…
I love the cartoons from the mid-70's in particular. The baseball player almost always looked the same no matter who he was supposed to be. I wonder if somewhere out on the internets there is a list or three of the best cartoons of all time. One of my favorites was on the back of Ron Santo's 75 card, referring to Ken "Hawk" Harrelson. An eagle carrying a baseball in its talons -- awesome!
October 26, 2013 at 10:09 PM

Marcus said…
"That crazy Dave." That made me laugh. If he gets hit in the face when playing the Padres, maybe Steve Arlin will help put his teeth back into place.
October 26, 2013 at 10:26 PM

View From the Skybox said…
This is how collectors looked in the 70's. Stylin' and profilin'. Then collectors went broke "investing" in the 80's by buying up storage units for cases of vending boxes. Then when the bubble burst, collectors gave up on themselves. Hence now the average collector is obese and sporting a neckbeard and flatbill.
October 27, 2013 at 2:35 AM

Commishbob said…
Volunteer dentist??? I'm sure there is a joke to be made about preferring to be a volunteer gynecologist waiting to be typed but I'll not be the guy to type it.
October 27, 2013 at 2:53 AM

runfore!kelloggs baseball cards said…
When I first attended a card show in the mid-70s, dealers did just have a stack of cards on the table. The only ones in a display of any kind were the ones that I couldn't afford anyway.
October 27, 2013 at 11:38 AM

Fuji said…
Looks like I'm going to have to pay more attention to Twitter... these are awesome! My favorite is easily the volunteer dentist cartoon. I'm not sure if I'd let that guy get anywhere near my mouth.
October 27, 2013 at 12:58 PM

petethan said…
I wonder if Marichal succeeded in keeping his wife from ever seeing that cartoon...
October 27, 2013 at 3:02 PM

Dave said…
I wonder how angry Earl Weaver would have been if he ever found out John Lowenstein was drawing caricatures of him?
October 28, 2013 at 7:39 PM