Legend of cardboard in the making 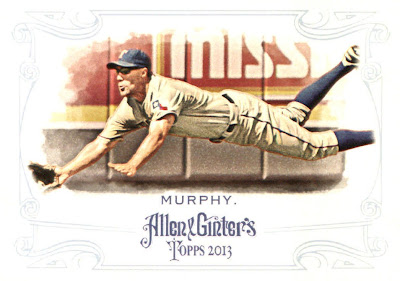 I've decided that indeed I have another series on this blog. "Legends of Cardboard" will one day soon take up residence in the tabs up top. This is going to make for some uncomfortable and unpopular decisions in the near future as I'll have to remove something that's already up there. But I'm ready for it. Besides, my blog, my rules.

These pictures rise above the average photo of their cardboard peers so much so that it's obvious that they have the talent for showcasing themselves on cardboard.

The first person honored as being a Legend of Cardboard was Carlos Hernandez, 1990s backup catcher for the Dodgers (and starting catcher for one shining moment with the '98 Padres).

I'm not ready to nominate another LOC yet. But I would like to take a look at someone who has the potential for LOC-dom.

It's David Murphy, a current outfielder for the Rangers.

When I saw his 2013 Allen & Ginter card that you see above (this is a pilfered scan, I don't have this card, I'm too poor for new cards, remember?), it just added to what could be his cardboard legend.

Sure, if this image had appeared on another card other than A&G, it would have looked a lot better. We all know how horribly A&G's design works with horizontal cards. Getting the complete look at Murphy's sprawling self would have given this photo a better chance.

But if you consider Murphy's 2013 Topps base card in conjunction with the A&G card, there is potential there. 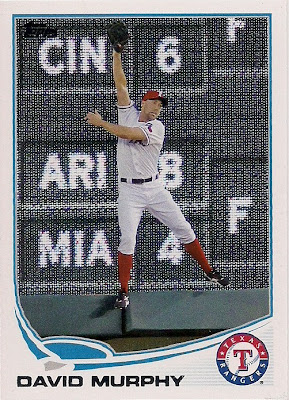 That's one of the better cards of 2013, although I don't think Murphy is entirely successful here. The ball appears to be ricocheting somewhere off stage. Still, when you're showing effort in front of a giant scoreboard -- regardless of the fact that the Diamondbacks won -- you are moving toward Legend of Cardboard status.

Now combine those two cards with my favorite card of 2009: 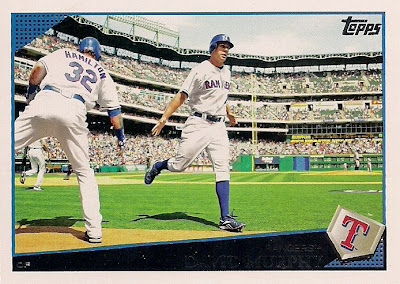 The foil refuses to tell you, but that is indeed David Murphy exchanging low-fives with Josh Hamilton in front of the very spacious and way-too-majestic Rangers Ballpark at Arlington (it looks like a place where they stage gladiator battles).

Now those last two are two terrific cards of someone who isn't known a whole lot outside of the AL West.

I admit I'm not familiar with Murphy outside of seeing him in the playoffs periodically. I make a conscious effort not to follow American League baseball and will jump at the chance to see the Cubs play the Padres if the other choices are AL teams. Bud Selig is working very hard to eliminate that bias in me, but until the entire major leagues is one homogenized mess and we're playing the World Series in Singapore, I will continue to have limited knowledge of AL players.

That was a tangent. But, really, how many of us are going to remember Murphy 10 years after he's retired?

So with that, and those two great pieces of cardboard -- and one decent A&G card -- I think we definitely have something in the making.

Let's take a look at a few other Murphy cards: 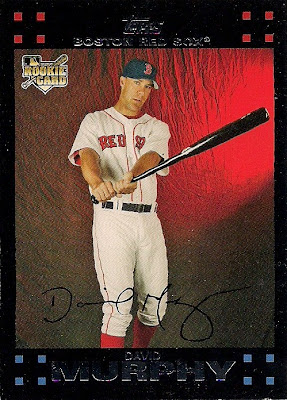 This is a young Red Sox Murphy, back during the days when curtains on baseball cards were acceptable. I'm so glad this was a phase.

Not a bad card, but really nothing notable, especially when there was drapery everywhere in 2007. 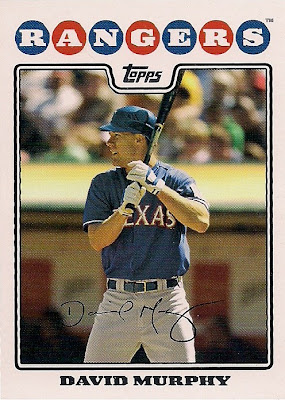 Ugh. 2008. I'll tell you what should make Legend of Cardboard status -- a player who actually produced a decent card in 2008 Topps. (I know there are some, but there aren't many). This is not one of Murphy's finer cardboard moments. 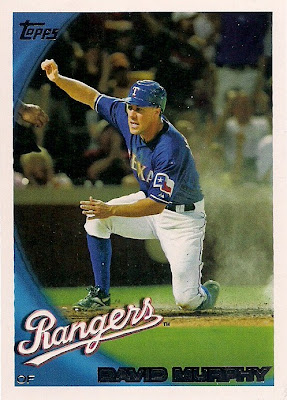 Coming off of the stellar 2009 Topps card, this doesn't match up. But it's actually pretty good. Murphy seems to be an animated fellow and you can't argue with dust on a card. Not a characteristic shot and that's always a plus. 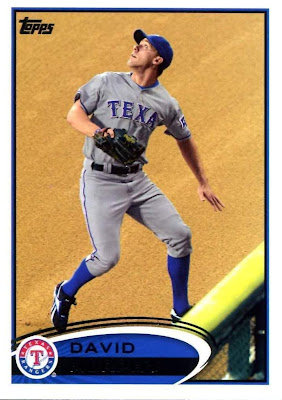 Murphy's 2011 and 2012 Topps base cards are sort of similar. Both show him pursuing a ball in the outfield (in the 2011 card, he's about to catch what appears to be a soft liner). This is another plus for Murphy because fielding action shots make for great cards.

I wouldn't call either 2011 or 2012 great cards for Murphy, but I'm talking body of work here and I think he has a chance.

I'll continue to review his cards and who knows? Maybe you'll see him added to the Legend of Cardboard in a couple of years.

Or longer. You know how slow things work around here.

runfore!kelloggs baseball cards said…
So, what I'm hearing is that you want to watch the Cubs. That makes lots of us happy.
August 27, 2013 at 10:01 PM

steelehere said…
If you're taking a vote from your readers on what comes down when you make "Legend of Cardboard" a tab, I'm for pulling the "Match The Song Title".
August 28, 2013 at 12:20 AM

Play at the Plate said…
I've been wanting to do this very post so thanks for saving me the trouble! Those are great cards. I feel the same way about the National League, but it's mostly due to that fact that I don't have time to watch other games. Murph is having a down year, which is too bad for him because he could really be carving out a long term spot in Texas with Cruz out.
August 28, 2013 at 12:21 AM

night owl said…
No polls on that. You guys are tough to figure. I've got people telling me "Match the Song Title" is their favorite thing ever.
August 28, 2013 at 12:25 AM

BaseSetCalling said…
I noticed a possible nominee today, probably 'cuz of the Murhpy warning track card - Greg Dobs. Dobbs? The legend isn't sticking just yet. But the only reason I catch myself listening for bits of Greg Dobbs news when I check a Marlin broadcast for an inning or two once in a while, are his cards. Not necessarily good ones - the clubhouse lights card - but legends can be bad as well as good. I do love his "Get Down" card, or whatever the heck he is doing on that one.
September 1, 2013 at 12:08 AM