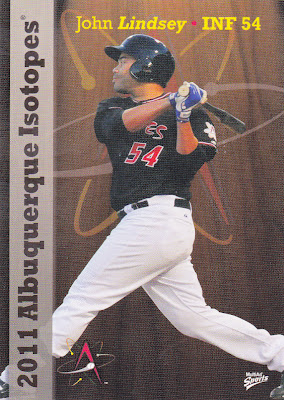 Topps has this product called Pro Debut. Perhaps you've heard about it. This is the second year it's been issued. It's yet another attempt to get us collectors addicted to the "who's next" aspect of collecting that has maintained a death grip on this hobby for the last 20-plus years.

I know it's technically a "minor league set." But I'm not buying that when the only place you can find it is in a hobby shop where mojo hunters outnumber collectors like me by at least 3:1. At least at the hobby shop that I know.

I don't ever envision a time when I would walk into my hobby shop and order up a few packs of Pro Debut. I might as well walk into the fanciest restaurant I know and demand some Pabst Blue Ribbon.

Fortunately, I will never need to do that, because Kris of Cards in the Attic sends me my own version of Pro Debut each year.

Usually it's just the set of Triple A Dodgers. He provided that again this year. But he also sent me the Pacific Coast League sets from 2010 and 2011 this time. I know that's only the PCL, and Pro Debut deals a lot in the lower levels of minor league ball.

But I really only care about Dodgers of the "soon-to-be-major leaguers" variety. So this suits me just fine.

Why do I need to look at another card set with the Topps design and a guy in rookie ball when I've got some key upcoming Dodgers right here? 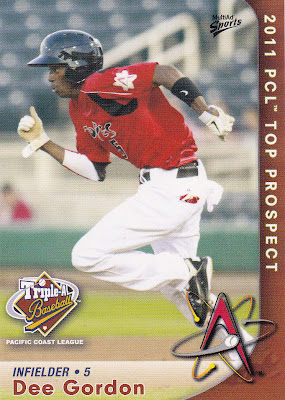 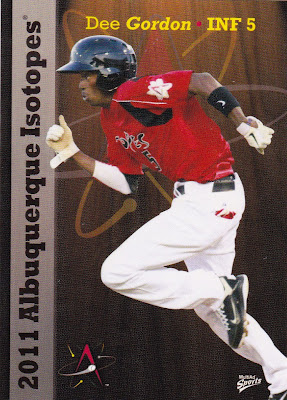 And there's the Dodgers' shortstop of the future in the Isotopes set.

Hmmm. Probably not the best example to start is it? 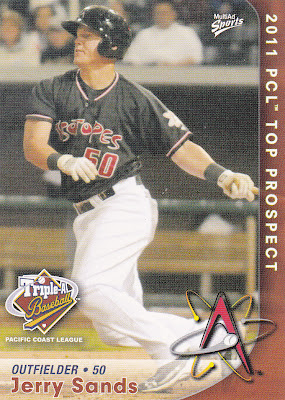 How about the recently demoted Jerry Sands in the PCL set?  He's still going to do big things. 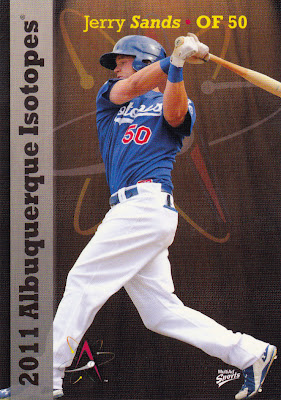 There he is in the Isotopes set from this year. I already have like seven Jerry Sands cards. And it's not because I've gone broke buying Bowman. This is the frugal route. 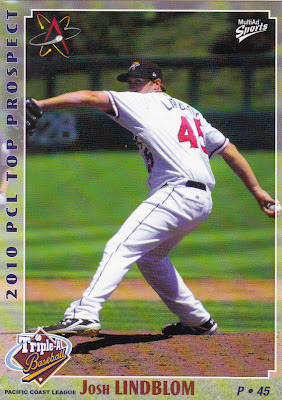 Just a couple more Dodgers and then I'll get to the other heavy hitters. Here is someone I hope doesn't string me along for five years before I know if he's the real deal. I'd prefer that Lindblom does not follow the Scott Elbert path. 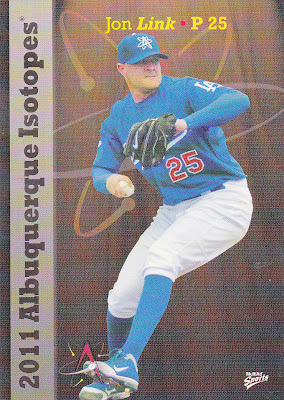 Another for the Jon Link Supercollector. 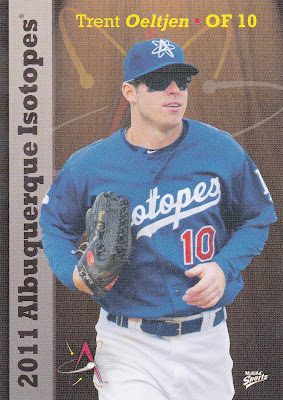 Trent is Sands' replacement, I guess. I'd love to see an Australian succeed in a Dodger uniform (he's got the right uniform number with the Isotopes). But he's an STS (short-term solution) guy.

Ok, you don't want to see guys with last names you can't pronounce.

Here are the big shots: 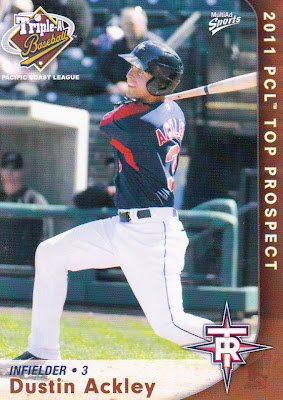 Just called up by Seattle. I hear the Mariner fan is really excited. 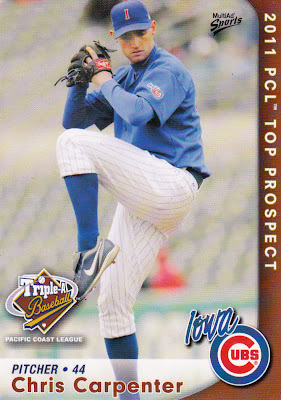 Does a Chris Carpenter with the Cubs leave Chicago fans conflicted? 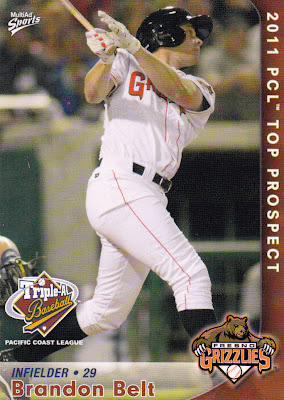 Hey Giants fans, I have a card of a Giants player with a cutesy baseball name that you don't have. Now, where's the shredder? 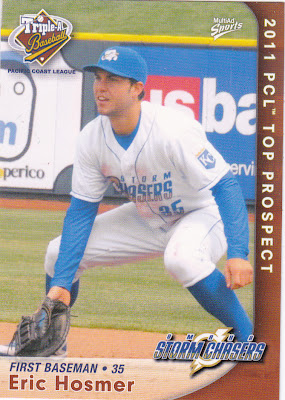 You may recall that I mentioned that a certain Royals prospect shares the last name with a former co-worker of mine who consistently reeked of bacon. I think he would actually sweat bacon fat. And now I've forgotten what I'm typing. 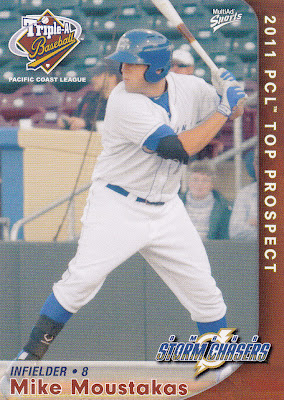 I hope young Mike plays in the majors for 20 years. I want to be able to say "Moustakas" for a long time. 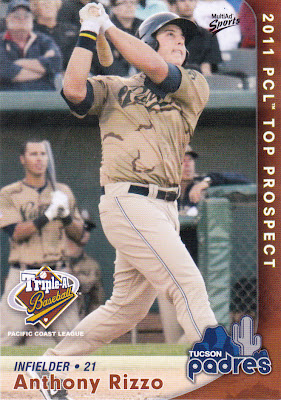 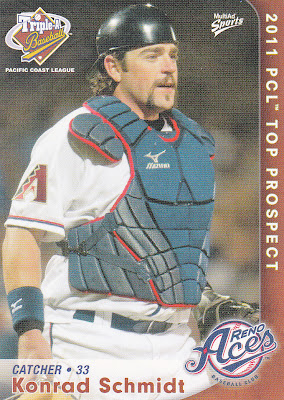 Please tell me that this is an actual ballplayer, not some kind of joke, and that he is being traded to the Dodgers this immediate instant. We need more players with names like this who know how to present themselves as professional ballplayers should be presented. Konrad, I applaud you.

Of course, I should show some of the 2010 PCL set biggies, too. I'll try to move a little quicker for those: 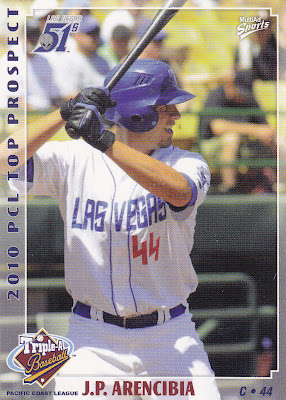 The 2010 PCL most valuable player. 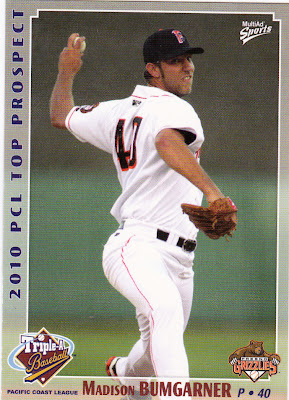 Topps actually had the balls to put this player on the same card as Clayton Kershaw in Series 2. This is why I'm dumping on one of your products, boys in corporate. 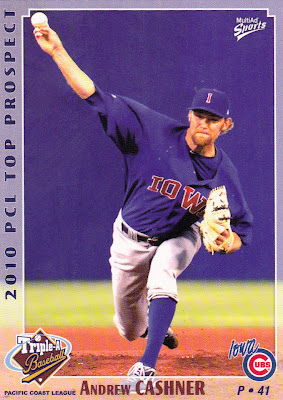 That's some defense Cashner has behind him. 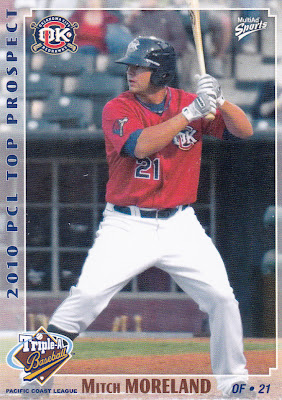 Guy is going to be good for awhile, but I'm not blowing the bank account on getting every Bowman card of his. 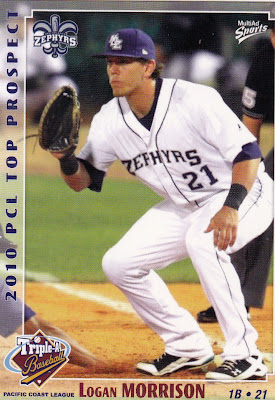 Logan is one of the worst first names that I have ever come across. Now, this is purely my opinion. Kind of like calling all journalists sloppy and inconsiderate. But I am sticking to my opinion. And I'm sorry if you were offended. Lighten up. 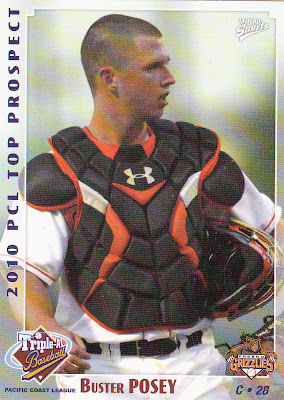 If when Buster Posey returns to the lineup and there is a base runner coming in from third for a potential play at the plate, that base runner does anything to unnecessarily avoid a collision at the plate because (*gasp*) it's Buster out there and shuckins he went through an awful lot, golly-gee-whiz, I am going to vomit for a week straight. 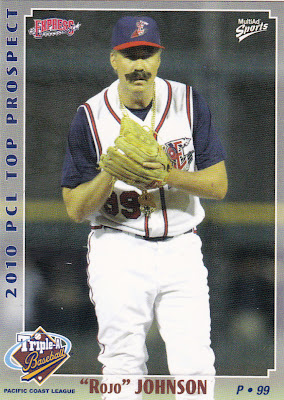 Awesome. A card of Rojo Johnson. Came in from the bullpen carrying a plastic bag filled with cans of beer. Johnson, also known as Will Ferrell, appeared for the Round Rock Express in May of 2010. 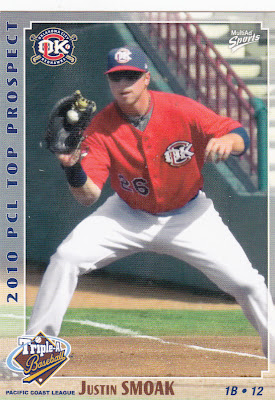 Another guy with a last name that headline writers will wear out to infinity. I have been to several journalism seminars in which noted writers and editors have said that using a player's name in a headline is the sign of a hack. Then everyone in the seminar goes out and proceeds to use the name of a player in a headline.

I guess we are all sloppy.

If you don't want to blow your cash on whatever Topps is charging for Pro Debut, I recommend tracking down one of these PCL sets. I imagine there is one for the International League, too. They're just as interesting as PD, judging by the relatively few PD cards that I have. 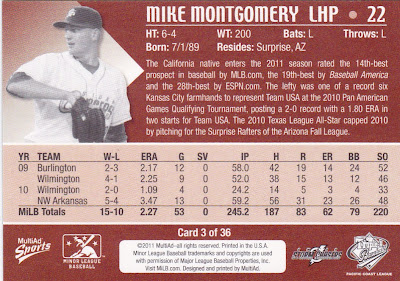 I think the 2011 PCL backs are pretty tremendous, too.

Kris also sent me a compilation CD, too, of which I have yet to investigate because I have no time for frivolities like music. But I hope to report back. If my ears bleed, you'll know.

Anthony Hughes said…
Minor league cards are fun, even if they never make it to be anybody earthshattering. Some of my coolest cards are the ones I bought at Tucson Toros games in mid eighties. Yeah, sitting in the 110 degree sun watching baseball, drinking cans of Old Style... those were the days.
June 17, 2011 at 9:35 AM

Two Packs A Day said…
great post! I am heading to the Topes game Sunday with my dad to celebrate Father's Day. I will pick up a team set and I see that I can get a 2011 PCL Top Prospects set as well since those appear to be released now.

I still like Pro Debut - cards of a lot of prospects (and duplicates sell well!) but you still need a Topes team set because the Topes rarely make the pro debut sets (I think Dee Gordon is in the 2011 version and I think there is one in the 2010 series 2 but I have yet to pull it from the boxes I am working on.

carlsonjok said…
I saw Dee Gordon at the OKC home opener. He is really fast, but he looks like he is barely out of junior high school. I couldn't help but think he was playing dress-up with his father's batting helmet.
June 17, 2011 at 12:54 PM

Sooz said…
I like this set a lot. the BF picked up the set just to get the Moreland card.

I think there are also a few autos floating out there of his Rojo Johnson card that Will Farrell signed for charity.
June 18, 2011 at 12:58 AM

Spiegel83 said…
Great Dee Gordon cards. I may become a Dee Super Collector. Also, don't knock ordering Pabst in a fancy restaurant. I sometimes hang in trendy LA lounges and order a bottle of Bud.
June 19, 2011 at 12:28 AM