December 11, 2019
(Welcome to the first day of Gerrit Cole as a New York Yankee. In true Yankee fashion, the Cole news not only annoyed me on a baseball level, but from a job perspective as well, announced after midnight, approximately 30 minutes before deadline, forcing absolute chaos in an attempt to get it  published in the paper. So those of you who woke up to the news and announced it as if it was a new thing, I have one thing I wanna say: I KNOW!!!!!!!! Welcome to Cardboard Appreciation. This is the 287th in a series): 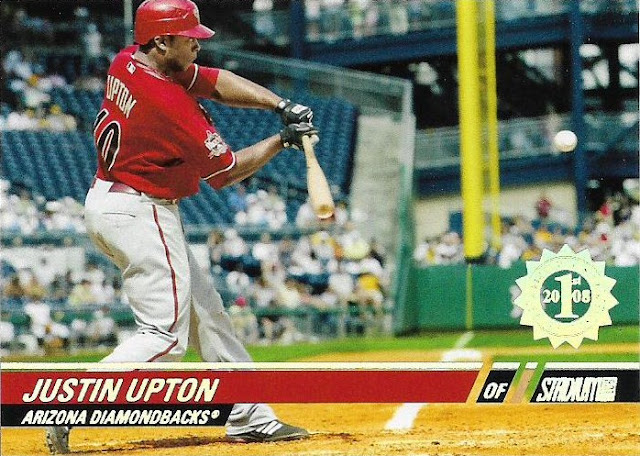 Eleven years ago, I did a dumb thing.

I decided to attempt to complete the new Topps Stadium Club set, which was released in early November of 2008.

I liked the look of the cards. It was the first Stadium Club set in five years. And, I was attempting to complete a lot of 2008 sets that year because that's what I did then. Got to complete what's on store shelves, right?

Well, 2008 Stadium Club showed me the error of my thinking.

The set is basically impossible to complete.

Card No. 94 of the 150-card set (if you include the autographed cards in the set, it balloons to 185 cards, but I'm not counting those) does not exist. It was supposed to be Joe DiMaggio but somewhere in the process of making the set, Topps lost the DiMaggio licensing rights to Upper Deck. So the DiMaggio card was pulled but there are apparently "cut-out" DiMaggio cards from the set if you can find one.

I'm not going to find one.

Early in the process of trying to complete the set, I discovered I was pulling the same cards over and over. Adrian Gonzalez was one. Roy Halladay was another. Joba Chamberlain, too. Over and over.

That was because every third card in the set, all of the cards with a number divisible by three, were short-printed to 999 copies. They're not that easy to find. But you could get around that by finding the parallel version, the first-day issue cards, which are easier to land but you still got to search.

So, I decided, if I want to complete this thing, I have to go for the first-day issue cards for all the divisible-by-three cards.

I had no idea what I was getting into.

Well, I did complete Allen & Ginter. But Heritage still isn't complete. I gave up on Timeline and traded off some of the cards. I haven't given any extra thought to Masterpieces.

But Stadium Club, dammit, I was determined to complete.

It took 11 years, and the last few years, I grabbed maybe one card a year, but, finally, with the arrival of the Justin Upton First-Day Issue card that you saw at the top of the post, my set is complete -- by my standards.

Here is a look at all of the cards now: 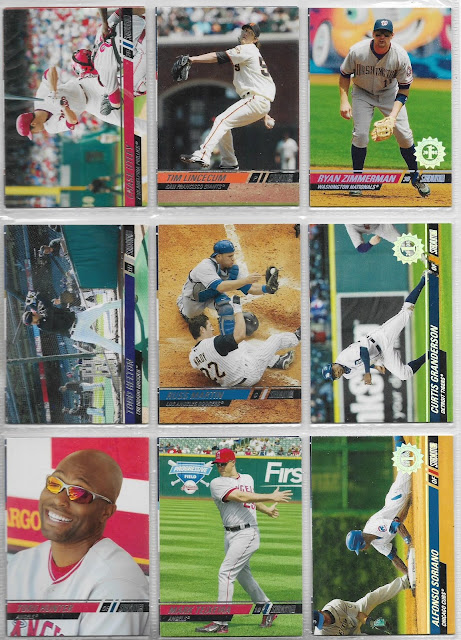 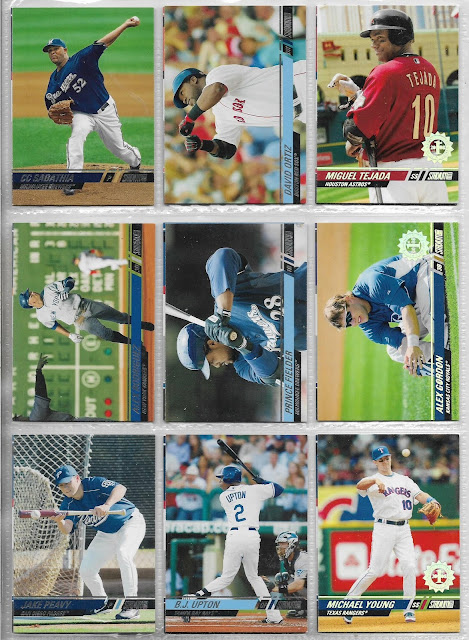 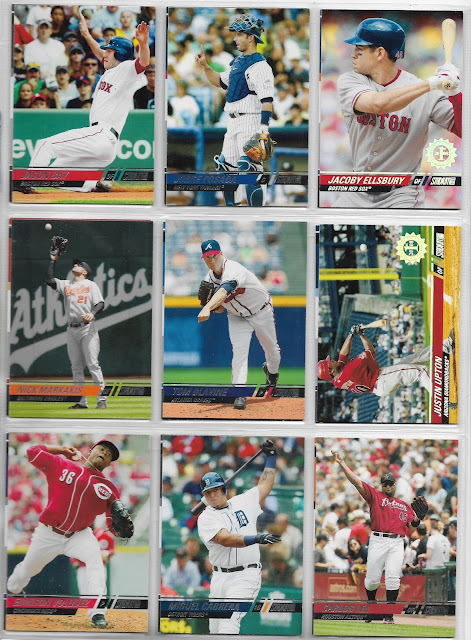 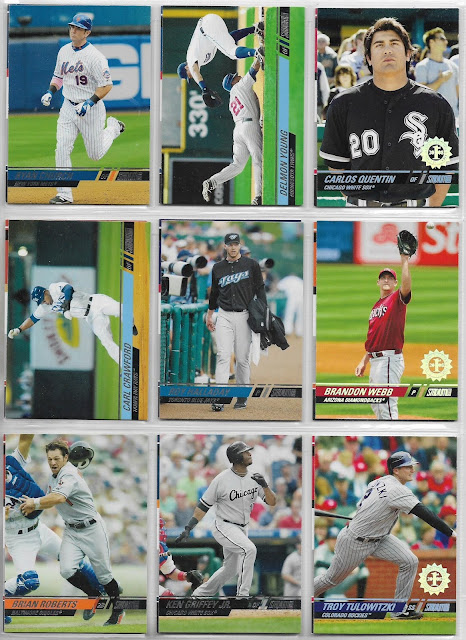 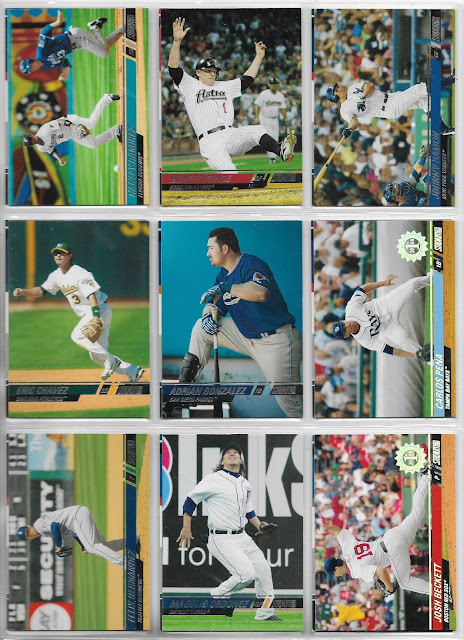 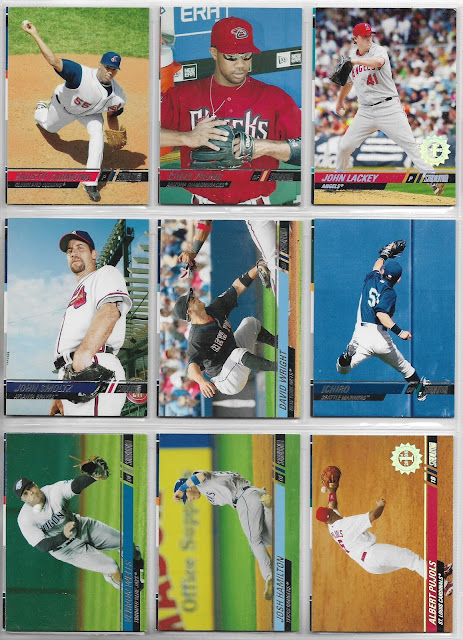 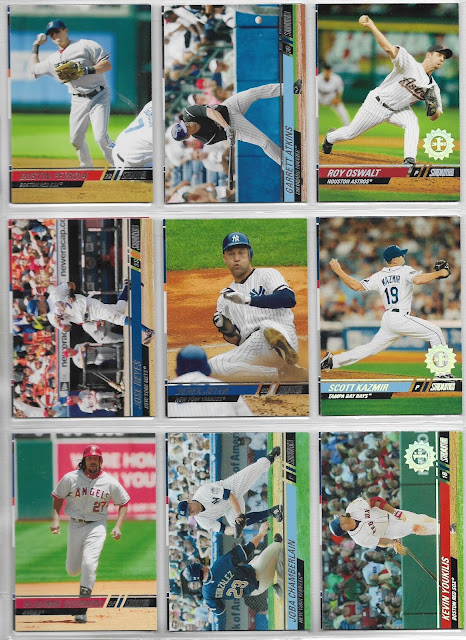 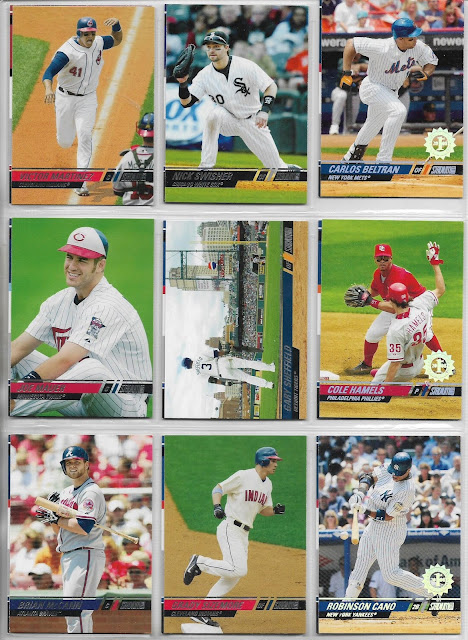 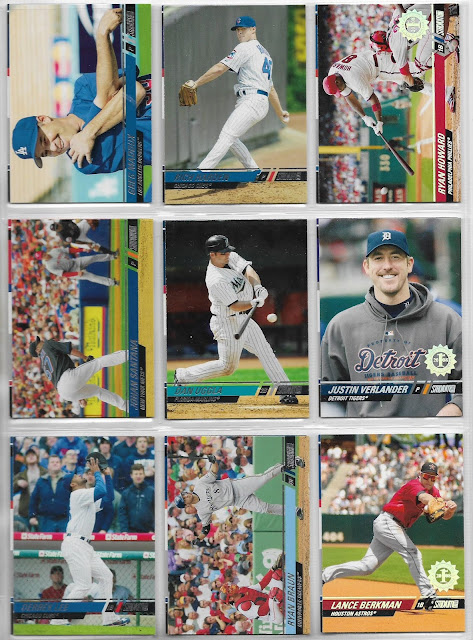 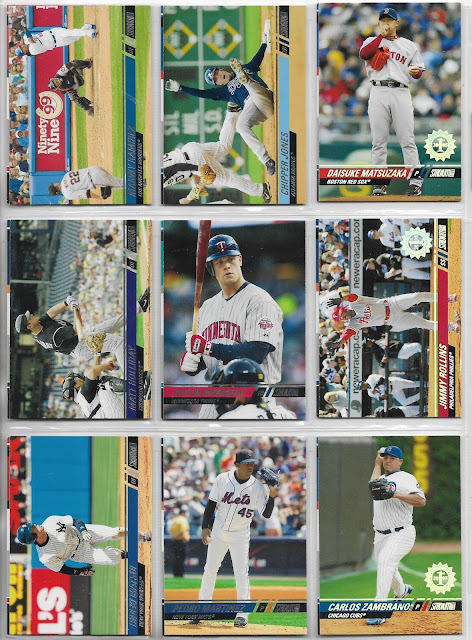 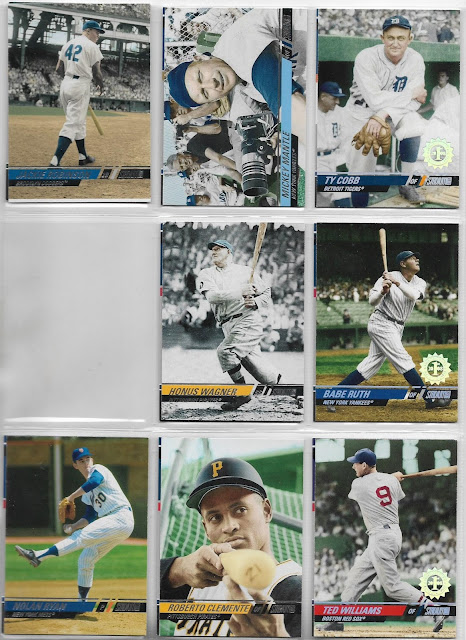 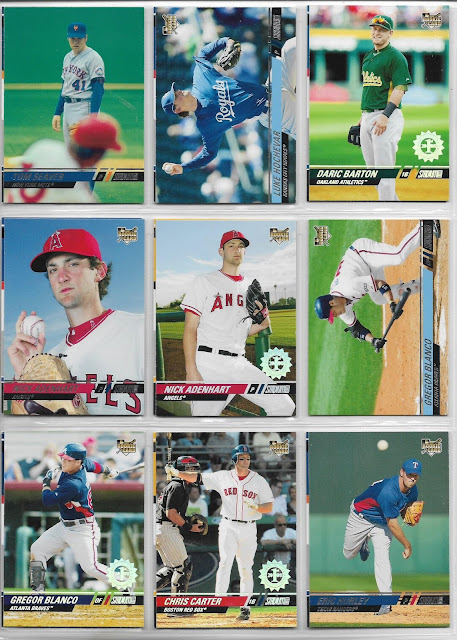 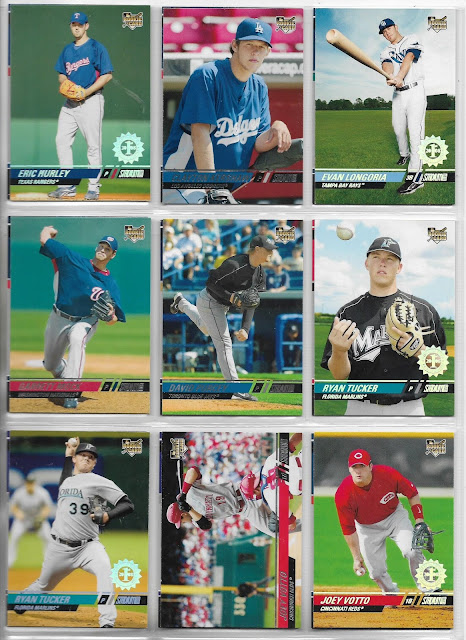 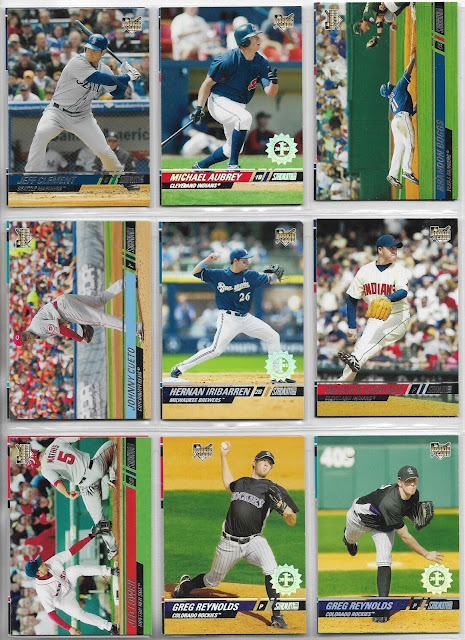 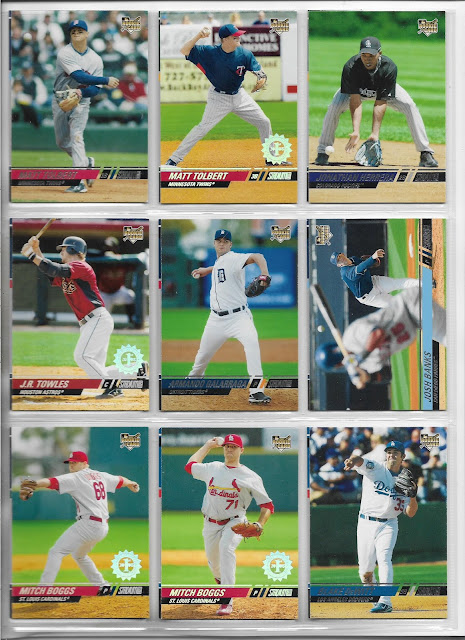 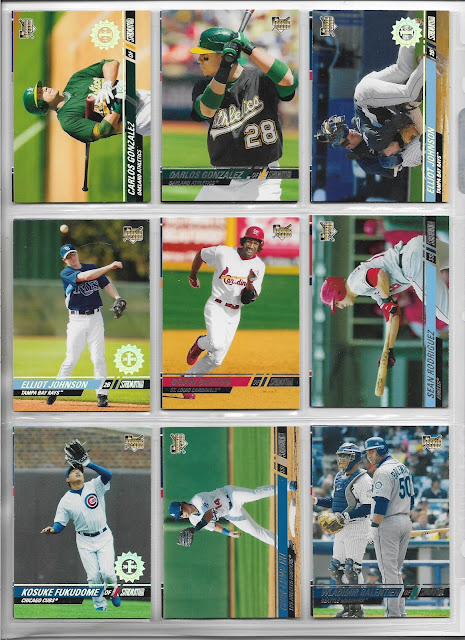 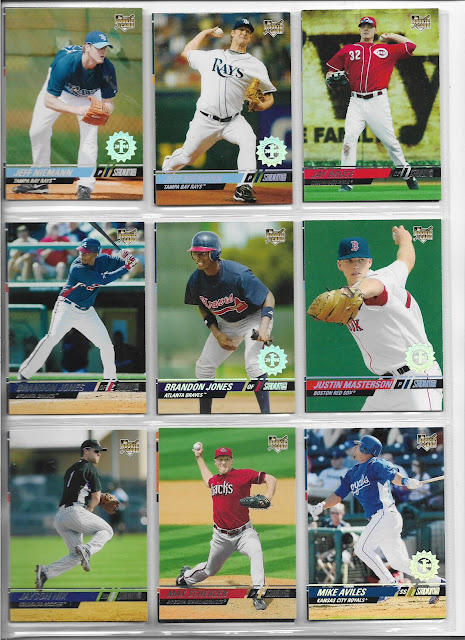 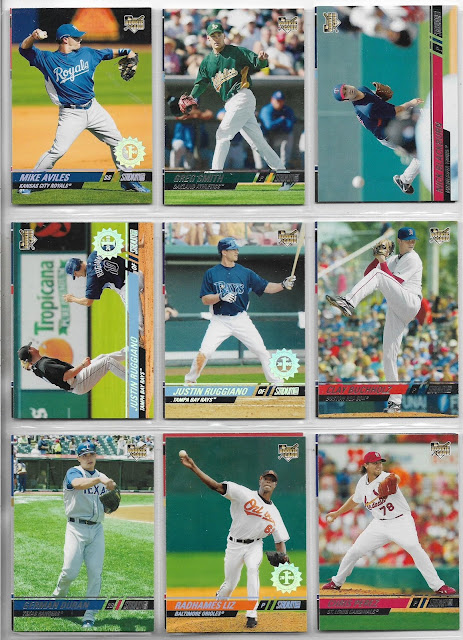 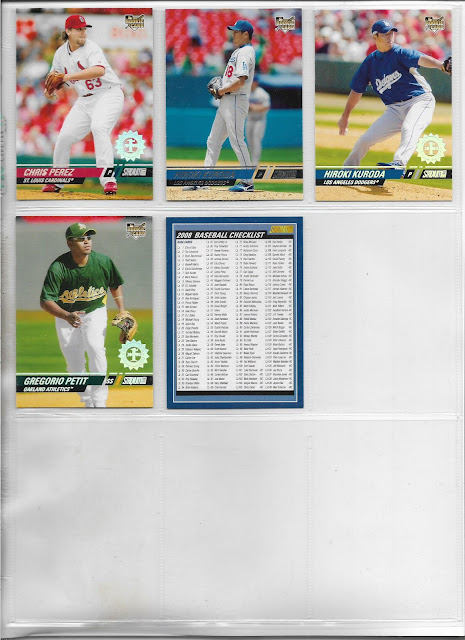 As you can see I left a blank spot where the DiMaggio card was supposed to go. The way I have them placed in the pages is kind of a holdover from how I used to think about modern cards: must try to collect every single one!

Also, if I managed to find both rookie images, I put both cards in the pages side-by-side. Now that the set is complete, I'll probably rework those cards and scrap the double-bagging. I may put this set in with the only other Stadium Club set I have completed, the 2015 set. Although I don't know if the '08 set deserves to be in with the very fine, very nonconfusing 2015 set.

The images in the 2008 set are as nice as the other Stadium Club versions, but the set didn't sell well, probably because of the crazy configuration. Stadium Club didn't appear on the market again until 2014, and even then that was hobby only as a wary Topps tested the waters after the '08 disaster.

I know that thanks to the '08 fiasco, I will never go into a modern set blind again. I will try out a set for awhile before deciding I want to complete it, because one of the worst feelings is giving up in the middle of a set, knowing you can't complete it.

Fortunately, I can say that with 2008 Stadium Club, it is complete. As complete as it's going to get anyway. And there's no chance I will try to chase down any of those other numbered to 999 cards or any of the extra images of the rookie players.

Eleven years later, after many of the careers of the players featured in the set are finished, I am finished also.

Nick said…
Congrats on yet another completed set! Also much thanks for posting all the cards together like that -- given Stadium Club's recent resurgence, I sometimes forget how nice this particular set really was.
December 11, 2019 at 8:42 PM

Lee Hero said…
Geez. I was out of the game in 2008, but just reading all of that made my head hurt! Congratulations on completing such a daunting task.
December 11, 2019 at 9:13 PM

Trevor P said…
I had no idea that the set was so complicated. Congrats on finishing it. I tend to think like you; I have my own idea of what's "complete." I have to say, though, it would bother me to see all those First-Day stamps in my set. For no other reason than it would remind me of what a pain in the butt the set is.
December 11, 2019 at 10:00 PM

Nachos Grande said…
This is a good year for finishing sets from 2008! I finally finished off that UD Timelines set that you mentioned above. Like you, I went guns blazing in 2008 trying to complete sets (so much so that I'm still working on both the 2008 Heritage and the 2008 Goudey sets). For my money, my biggest mistake was probably trying to tackle Goudey with all of its (expensive) short prints...things I wasn't much aware of back in '08.
December 11, 2019 at 10:03 PM

Adam Kaningher said…
The thing I remember most about this set is that Garrett Atkins's card has the wrong color-coding.
December 11, 2019 at 11:25 PM

Billy Kingsley said…
That seems like a really frustrating set to collect. What were they thinking short printing a third of the cards?
December 12, 2019 at 1:03 AM

GCA said…
Holy corporate complications, Batman! That strikes that set from the list of potential targets for me. I can just picture a committee of hot shot executives saying "Let's be innovative. OK, we'll short print just every third card. And have parallels. Are they short printed too? Nah. Just throw it all together...."

I"m working on Timelines too. Don't think I have a list up yet. The back end of that one seems to have more than meets the eye too. I'm one to quickly dismiss "all the rookies at the end" for a lot of products and call them done.
December 12, 2019 at 12:01 PM

Fuji said…
Congratulations on completing this gorgeous set! I figured something was a little funky when I started chasing the Max Scherzer rookie card from this set. Pretty sure I've seen at least 3 different copies of his card.
December 13, 2019 at 12:49 AM

Defenders50 said…
This is a very catharsis filled post. I think I got a whiff of it and I'm pretty sure I'll never come close to completing the set myself.
December 13, 2019 at 12:59 PM

carlsonjok said…
Well done on completing that set. And, given your lede, I am rather miffed about the Cole signing and I'm a Yankee fan. Who gives a 9 year, $300M+ contract to a pitcher? I wouldn't give that to a position player, with the sole exception of Mike Trout.

Ryan G said…
Congratulations! I finished this set last year, and did the same thing as you - any of the parallels were adequate. Got the rookie photo variations, too. I’m stupid enough to be working on the autographs, down to seven. That includes Scherzer and Keyshawn though!
December 16, 2019 at 6:02 AM