You could have knocked me over with a penguin feather, the afterward 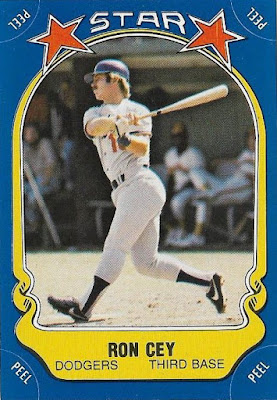 I'm not sure if everyone connected the dots in the comments in yesterday's post about the Ron Cey-signed birthday card I received in the mail, so let me do that here.

The card, indeed, was created by a blogger, my good bud, Rod of Padrographs. He orchestrated the whole thing. He created the art for the front, the penguin and the owl, and the inside. He then shipped it off to Cey's address in Southern California and wrote him a little story about me and my blog.

He said that I write a post about Ron Cey each day on his birthday and gave him the link to my website. He told him when my birthday was and asked Cey to sign the card and then send it to the address Rod provided. Cey mailed the envelope a week ago Monday and it arrived at my home yesterday, well ahead of time for my birthday.

That's eight days to get from Portland, Ore., to Woodlawn Hills, Ca., to Watertown, N.Y. But Cey is the most prompt TTM signer that I know (not that I'm versed in that stuff), so it's not that much of a surprise.

It's still too cool. This is my favorite part: 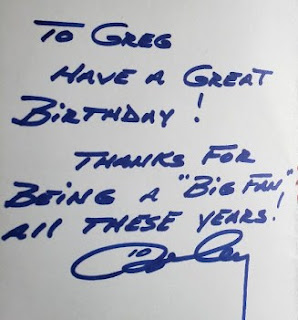 No, it's not the signature. It's the inscription.

That is all The Penguin. He wrote the whole thing, uncoached by Rod. That is pretty unbelievable.

It makes me wonder whether he did check out my blog, maybe the birthday posts? That may have spurned him on to write something extra (this reminds me a little of the time when a fellow blogger discussed my blog with Jerry Reuss and before I knew it, Jerry Reuss was commenting on my blog).

So, although this is still pretty fantastic -- a thrilling gesture by my favorite player of all-time and great, thoughtful work by Rod -- it does clear up some of the more bizarre images in my head of Ron Cey downloading pictures of penguins and owls and printing them off. Obviously, I knew that couldn't be happening and someone that knew me had to be behind all this.

I feel like I need to show some collectibles of Ron Cey since I've gone two whole posts without any. But I believe I have shown every single Cey card in my collection, which numbers around 130 (Cey, mercifully, retired before the advent of most player collectors and the disaster of parallels for the sake of parallels).

That leaves the stickers.

Cey appeared on two full-size stickers that I know of. The 1981 Fleer sticker is at the top of the post. 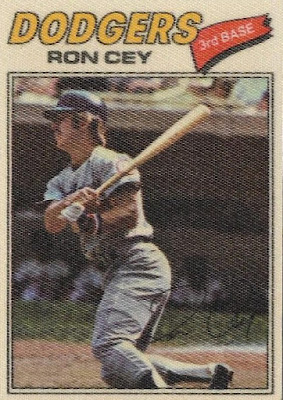 His first sticker is in the glorious 1977 Topps cloth stickers set, which I adore.

I understand that there are full-size stickers for 2019 Topps, which makes me want to look into getting a pack or two, even though I've basically barred stickers from my collection because have you seen how many cards there are?

By the 1980s -- which really is the golden era for stickers -- stickers shrank in size, but there were so much more of them. 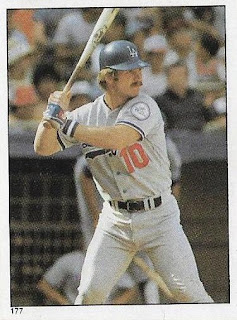 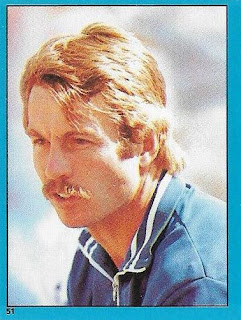 Cey appears in the first two editions of the Topps '80s stickers, from 1981 and 1982, which was a terrific period for Cey and the Dodgers. I've always wondered what Cey is doing in that '82 sticker. He seems entranced.

Cey appears again as a Dodger in the 1983 Topps sticker set. I may or may not have that in my collection. I can't find it right now, but it looks very familiar. Perhaps it's in the dupes box. But I've thrown it on the Nebulous 9 just in case.

There are several other stickers of Cey, because again it was the '80s, but he's slumming as a Cub in those and I am not interested.

It would be cool if Topps would put out a retro sticker set -- full-size stickers of players from the '70s and '80s, including players like Cey.

But there has been exactly one unique card of Cey created in the last six years so there's no way that's going to happen.

That's OK. I don't need to be chasing those down along with everything else. Besides, with unique collectibles like penguin lamps and personally inscribed birthday cards, I'm doing so much better than tracking down a modern-day Cey card.

Thanks again, Rod. That's above and beyond.

night owl said…
Yup, you like being that guy. My geographic knowledge of Southern Calif is not great as you might guess.
June 26, 2019 at 8:34 PM

Fuji said…
We're pretty lucky to have such a great card blogging community filled with thoughtful collectors. The amount of time and effort Rod put into this gift is just mind-blowing. If I were to create a personal Mount Rushmore of generous bloggers, he'd definitely make the cut.
June 28, 2019 at 1:43 AM